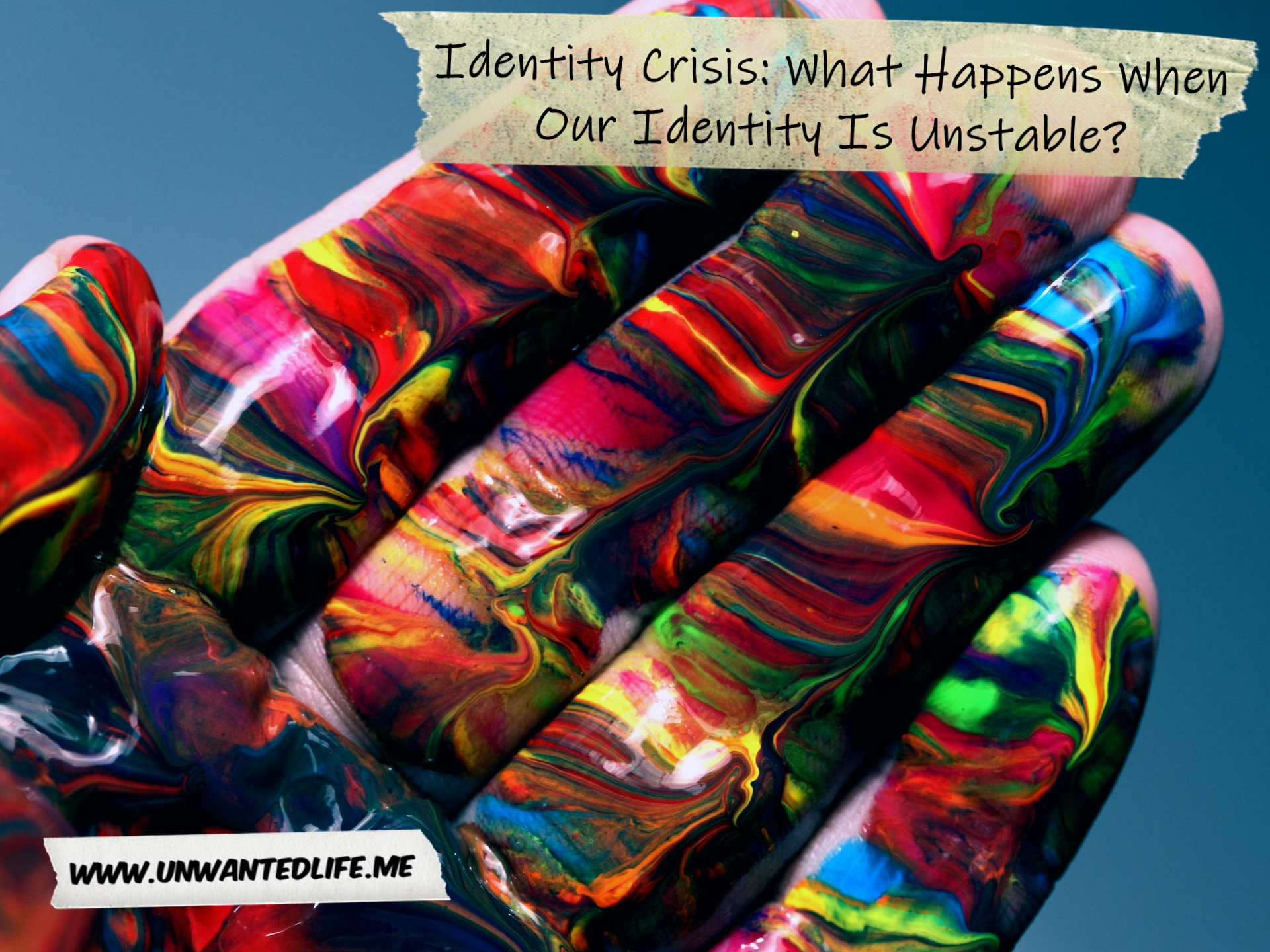 If we have an unstable identity, such as someone not coming to terms with their gender identity, sexuality, or in my case, their ethnicity, then that can be a breeding ground for mental health issues. My issues with my ethnicity, because of relentless racial abuse as a child, left me struggling with an identity crisis right into my twenties. I still have some lingering issues with it from time to time to this day, even though I’m in my forties now.

Having an identity helps define who we are, who we see ourselves as being. This can encompass our values, beliefs, and our personality (Harley Therapy). Our identity can be made up of the roles we play in life, such as parent, manager, and helper, but can also be heavily affected by our past, especially trauma.

Much like I outlined in my glow up and finding meaning and purpose articles, our identity can also be influenced by our hobbies. However, the things we identify with can change over time, which can change our identity, which is healthy. Unfortunately, this can sometimes led to an identity crisis, which if unresolved, is unhealthy for us.

It can also be argued that a midlife crisis is actually a crisis of identity, just like empty nest syndrome and other drastic life-changing events such as a loss of a loved one. In fact, the Healthline have argued just that, that big changes and life stressors can cause us to question our sense of self and identity, causing an identity crisis is left unresolved.

How Having An Identity Crisis Can Affect Our Mental Health

Starting from a place I know well from personal experience with having an identity crisis, we’ll start with ethnicity. Yip, Gee, and Takeuchi (2008) reported that the research suggests that the stresses endured by ethnic minorities can weaken the protections they have, wearing them down until they break. That’s exactly what happened to me. For a long time I was able to shrug off and laugh off all my racial abuse, until I couldn’t. Then my identify crisis began. This can be made worse when you don’t feel you fit in with either of your ethnicities.

Fernando (1984) goes a step further than just seeing racism as an extra stress for minorities to deal with, but that it should be seen as a pathogen that generates depression. Racism affects self-esteem and causes a loss of self, promoting helplessness, all of which are important for our identity.

Now imagine dealing with an ethnicity identity crisis, or any identity crisis, before you’ve even started to develop a sense of self. Our childhood’s and especially our teenage years, are where we develop our unique identity. Thus, instability of our identity during these developmental stages can cause a strong, but negative, identification with our ethnicity (Yip, Gee, and Takeuchi, 2008).

Adolescents with an unstable racial identity, like me when I was younger, have lower self-esteem (Sanchez, Shih, and Garcia, 2009). I’d put money on it being the same for adolescents with gender and sexual identity issues as well.

It’s all well and good saying that you don’t see colour, we get what you’re trying to say, but that’s actually not helpful. Our ethnic groups and skin colour do matter, and they need to be seen, because pretending you don’t means the injustice doesn’t get resolved.

In an ideal world, a mixed ethnicity child would have a family that tries to help them be positivity connected to their mixed ethnicity background (Greig, 2013), because ethnicity is just a social construct in the first place. We’re all human. My mum made no effort to understand, support, or help in anyway with dealing with the racial abuse I was suffering. And on top of that, I had my mum telling me that I ruined her life by being born. No wonder I had attachment problems and developed BPD.

If the parents of a mixed ethnicity child can’t provide the support they need to avoid a identity crisis, then they need to make sure someone else can (Greig, 2013). This is just as important as other mental health and wellbeing lessons our children need to be taught about.

Feelings of rejection from ones ethnic heritage often comes from the perceived inability to fit into discrete, monolithic ethnic categories (Campion, 2019). We have society and the media to blame for that. When you’re a Black person living in a very White society, you get schooled on a very specific way they perceive Black and other ethnic groups to be. All Black men are thugs was something I grow up with.

This has been so ingrained in me during my childhood, that I can still hear that voice telling me that when I’m around other Black men. I know it’s all bullshit, but the indoctrination has left it’s mark on me. It’s also why I worry about being Black in many White spaces. I worry I’ll scare White people just by existing near them, which is a weird way to live.

One thing I hate about society is their double standard, that even my partner falls into. People are fine with me saying whatever I want about my Black identity, because everyone sees me as Black. However, I’m not afford the same flexibility to say whatever I want about my White identity, without some people taking offense, even though I’m as much White as I am Black. I’m frequently denied my White heritage, simply because I don’t look White.

Another thing I hate is that on ethnic identity forms, especially when everything is listed alphabetically, that my mixed ethnicity title always has White before Black, even though no one sees me as White. I also hate the term race, as we’re not different races, we’re the same.

Racial impostor syndrome, a little like traditional imposter syndrome, is a very real thing for a lot of people (NPR), myself included. Just like people can feel like they’re a fraud at work, people can feel fake regarding their ethnic heritage. I know I did and still do at times. Not feeling or being Black enough was a problem I’ve always had, especially with the way I dress.

But what started my road to a stable identity had nothing to do with me being Black, White, or a mix of the two. It was my self identification as a metalhead. My love for metal music and goth aesthetic saved my life. This lead to my acceptance of my mixed ethnicity.

One of the reasons people can feel like they’re not accept because of their mixed ethnicity, is because of issues around colourism in some communities (Campion, 2019). However, I’ve not experienced this first-hand myself, but I’ve often felt that way nonetheless.

The emotional neglect and the racial abuse I endured as a child led to my development of borderline personality disorder (BPD). The attachments I lacked with my mother, the non-exist father, and no peers to counter that lack of parental attachment meant I became a people-pleaser. I changed who I was to try to get people to like me.

As I think I’ve made clear, children need a healthy attachment with a primary caregiver if you want to give them the best chance at life (Harley Therapy). Not having that heathy attachment growing up can impact everything that comes afterwards.

Changing who we are to try and be accepted is a very common problem reported by people with BPD (Harley Therapy). The unstable nature of this mental health condition isn’t just about having strong emotional reactions, but also links to a lack of identity. Although BPD can present differently for different people, I would hypothesise that most people with BPD have unresolved identity issues they need help with. If you’re struggling with an identity crisis, then, of course, your emotions are going to be stronger and more difficult to manage.

While I was attending group therapy for people with BPD, there was another client in the group who had unresolved issues with their sexual identity. Their issues were so similar to my past identity crisis because of my ethnicity that you could swap our identity issues and our stories would still make sense.

The client in question, and the group therapist, didn’t seem to clock this as being the root cause of their BPD. Which was one of the reasons I don’t like group therapy. Our stories were so similar that their BPD should have improved significantly if they were able to come to terms with their sexual identity, just like it did for me and my ethnicity.

One of the first articles I wrote for my blog was about one man’s battle with bulimia. Bulimia is one of the conditions that is most associated with identifying as being female, or at least it was. However, as this article showed, men have it too. In fact, it was something I’ve suffered from too, and talked about having this when I wrote about using Beat’s live chat service to get support from this eating disorder charity.

Because people tend to see bulimia as a problem only women suffer from, it can cause issues for male sufferers, which was clearly stated in the article, One Man’s Battle With Bulimia I’d discussed. This can cause people to question their identity, as their concerns are being dismissed without support, because they don’t met the outdated gender requirement to have this mental health condition. This is why I talk about my issues with my eating disorders.

A big part of having positive mental health is the sense of control we have in our lives. Therefore, a loss of control with how we self identify is going to have a negative affect on our mental health (Sanchez, 2010). 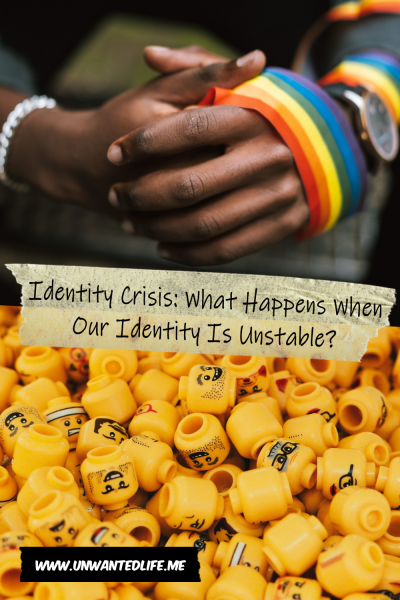 There are a lot of variables that can affect our identity. Mine started with my ethnic identity due to how people saw me as a child. But I still have issues around my identity when I’m trying to live up to my meaning in life. But people could easily find themselves questioning the identity when they lose someone close to them, experience trauma, or just lack a sense of meaning to live by.

So what happens when our identity is unstable? Well that depends. If we can quickly resolve our identity issues then nothing much will happen. That’s because our identity changes a lot over the course of our loves. However, if left unresolved or if they happen during our developmental stages, then this can have far reaching affects on our mental health and wellbeing.

But don’t worry, just as easily as you can question your identity, you can find a new one, because life is about change, and your identity will change as you grow, both literally and figuratively. That’s why I wrote about having a glow up and finding meaning over the last couple of weeks.

As always, leave your feedback in the comments section below. Also, please share your experiences with having an identity crisis in the comments section below as well. Don’t forget, if you want to stay up-to-date with my blog, then sign up for my newsletter below. Alternatively, get push notifications for new articles by clicking the red bell icon in the bottom right corner.

16 thoughts on “Identity Crisis: What Happens When Our Identity Is Unstable?”