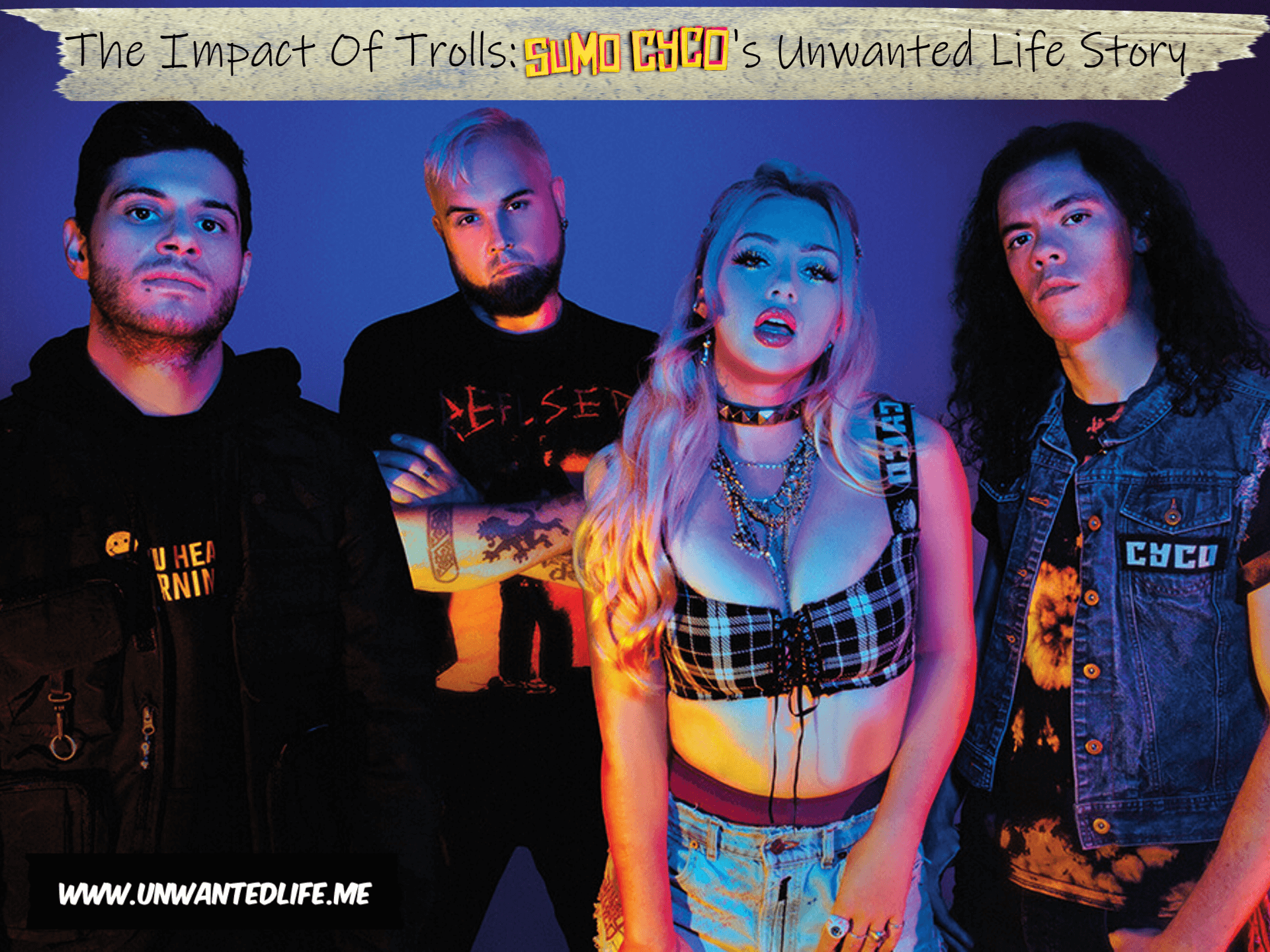 This is the fourth instalment in the Unwanted Life story series, with this story coming from my interview with Skye and Matt from Sumo Cyco. Skye is the very talented singer and Matt is the equally talented guitarist from Sumo Cyco, who shared their story of dealing with online trolls with me during our interview. I turned this into an Unwanted Life story because it’s important to know that anyone can be made to feel unwanted. Therefore, this Sumo Cyco story is about the impact of trolls.

The Impact Of Trolls

Matt told me how Sumo Cyco got hate a few times when their record dropped, which Skye summed up pretty succinctly, saying “I think people underestimate when you’re online and you make a comment like, “this is terrible, or I can’t believe people are liking this band” or, you know, typical ones that I see people make all the time of hating on Nickelback“.

Which is an excellent point, further emphasised when Skye said that trolls believe they can get away with saying horrible things to famous people because there’s no way “Justin Bieber would read this“. However, people like Skye value connections with their fans, so people like her DO read these comments: “when people write on our videos, they don’t realise that I’m actually reading all this information because I really care about growing our business and making sure that I know our fans“. Because, as Matt chimed in, it’s all about “staying connected with everyone“.

But it’s not just stupid random hate comments about the band that trolls leave, sometimes those comments are personal. Unfortunately, because Sumo Cyco has a female member, they can experience “lots of misogyny” according to Matt. Skye also told me she gets comments about her body, derogatory comments, and stuff about how “because I’m a chick, I can’t do stuff“.

Famous people are human just like the rest of us, and just like the rest of us, these kinds of horrible comments left by trolls can, and do, hurt them. Skye is no stranger to feeling the impact of trolls comments, “it can bum me out because I’m such a huge fan of thinking that this community is a very accepting place to be, that we all look out for each other, we all sing the same lyrics at these concerts“. Unfortunately, although we love to believe that the alternative music community is all about acceptance, just like any community, there are those that will discriminate against other members.

This pointless hate can influence us, with Skye stating that “when you see all those comments, it makes you question that community that you love and want to be a part of“. Skye went on to say “I think people don’t realise that it’s not only pushing me away, it’s pushing other females like myself who are looking at that video and saying, oh, that’s cool that she’s doing that, and then they read a comment of a guy saying horrible things about me“.

Skye’s had comments about her mole and how she should remove it. She’s also had comments about how she should go back to the gym, according to Matt, who said, “there’s just nothing worse than being fat shamed or something. Somebody like Skye being told you need to go back to the gym. Like, she’s gorgeous. Why would you write that to her? If you don’t like the song, you don’t like the song you’re literally trying to hurt her. And that sucks. That stuff really sucks. It makes no sense at all“.

But it’s not just Skye getting unwanted comments from trolls about her weight, even Matt has had this kind of hate. Matt told me how he’s had body shaming comments like, “Oh, look at the fat guitar player” and he has to remind himself that he “shouldn’t care about that” and you’ve just “got to tell yourself that over and over again“. Because Matt knows he shouldn’t be “worried about some fuck nut that body shames me“. And neither should anyone else, although it’s easier said than done.

These horrible comments about Skye’s appearance can stop other women from putting themselves out there because, as Skye said, women will feel like “that’s the comments that I might get if I put myself out there” which “stops a young girl sometimes from thinking that she can do it too, because somebody is even critiquing someone that’s giving it their best shot, you know? And that’s really sad“.

Even though Matt knows these comments come from a “small amount of population, you just wonder why you have to be so cruel“. If you don’t like something or someone, you can save yourself time and effort by not leaving nasty comments and instead get on with your life. Matt doesn’t want these trolls to be their fans, “but it can mentally strain us no matter how well our band’s doing” which is the unfortunate truth of trolls. 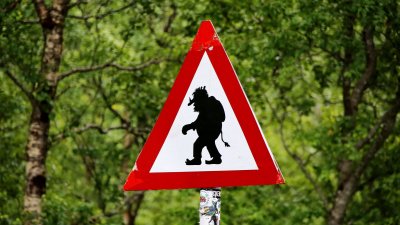 The problem is, as Matt said, somebody can be like, “I love your band, can’t wait to see you next” but the person who says “you guys suck, for some reason, all day it’s rattling around my brain“. I can testify to that as well. I can remember most of the horrible comments made to me right back to childhood. The positive stuff, not so much.

As Skye said, “it’s like one step forward, two steps back, right? Every time you see the hate, you take two steps back“. Nevertheless, Matt tries to remind Skye and himself that “even though they’re out there hating us, they’re never going to be our fan. So fuck them, just weed through that shit, and we’ll take all the ones that like us“.

However, Skye made a good point when she said “the hate gets overblown too. Like the type of people that have that in their hearts are more likely to comment and the people that are actually happy with their lives don’t comment. There’s so many more positive people out there“. Which is true. According to Matt, Sumo Cyco has “all these other people who have nothing but love for us“.

Like Skye, you just need to remind yourself that “these people don’t need to affect my life whatsoever and I can dismiss this and choose to let this not affect me“, although this can be tough in practise, even for music artists.

So ditch the negative bias, ignore the trolls, and focus on the good. If it helps, as a blogger and an influencer, create a list of all the good comments you’ve received so you can focus on those if the negative ones become too much. Create your own person cheerscrolling section in your journal, and if you don’t have a journal yet, get one, even if it’s specifically for this one journal task.

Through it all, luckily, Matt will “never give up on music” so you can expect to see Matt and Skye rocking out as Sumo Cyco for years to come. And I hope you won’t let trolls stop you from doing what you love either! 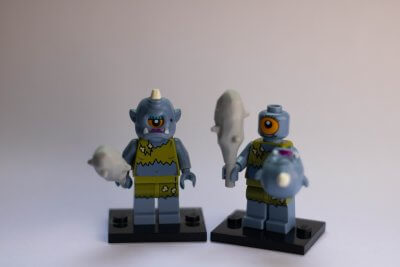 You can find Sumo Cyco at the following places

As always, leave your feedback in the comments section below. Also, feel free to share your experiences of trolls or share how Skye and Matt’s story of feeling unwanted made you feel in the comments section below as well. If you want to stay up-to-date with my blog, then sign up for my newsletter below. Alternatively, get push notifications for new posts by clicking the red bell icon in the bottom left corner.

Remember, if you’d like to submit your own stories of feeling unwanted, then let me know by contacting me through my social media accounts or by going to the contact page.