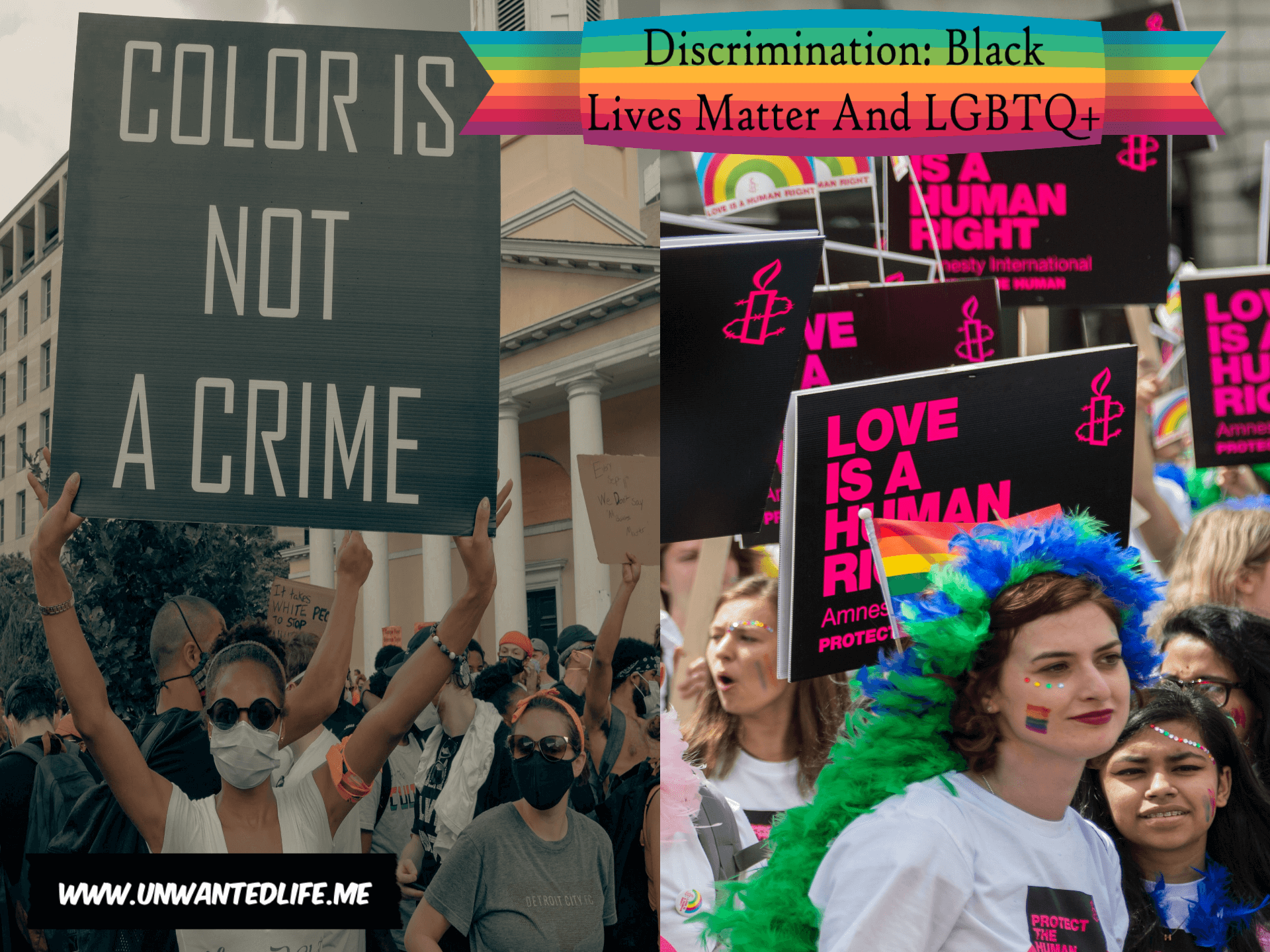 Due to the current protests going on in America, the UK and other countries in solidarity, over yet another example of police brutality and institutional racism towards the black community, I thought I’d write a post about discrimination. That’s because discrimination is as much a societal, political, and legal problem as it is a mental health and health problem.

I thought I’d start this post off with a look at some of the different forms of discrimination, with the last one being institutional discrimination, which is the one people are currently protesting to change. That’s because racism is an unpleasant reality that exists in many forms and acts not only through interpersonal assaults but also through societal structures (The Synergi Collaborative Centre, 2018).

This is where an individual is treated unfavourably because of their protected characteristic under the law. This is the obvious form of discrimination that we can witness or be subjected to.

Being refused service or entrance to a business because you’re black.

This is when there’s a rule, a policy, or a practice that applies to everyone, but which particularly disadvantages people who share a protected characteristic protected under the law. But it should be noted that indirect discrimination can be justified if it’s shown that the rule, policy, or practice is intended to meet a legitimate objective in a fair, balanced, and reasonable way. In such instances, it would be lawful.

If your elderly grandparents who are Muslim are living int a care home, and they ask to have their evening meals after sunset due to Ramadan, then this would become an example of indirect discrimination if this was refused unless there’s a legitimate reason for denying the request.

This occurs when a person is treated less favourably because they’re associated or linked with a person from a protected characteristic under the law.

Being refused entry into a club because the person you’re with is from the LGBTQ+ community.

This happens when a person is discriminated against because they are thought to have a particular protected characteristic under the law (rightly or wrongly), or are treated as if they do.

Being treated as if you’re Muslim just because you’re from the middle east, or someone thinking you’re gay because of how they think you act or look.

This is the discrimination that is embedded in the procedures, policies, rules, and/or objectives of large organizations, such as the American police force and judicial system.

A police officer kneeling on unarmed black man’s neck until he died, even after pleas of not being able to breathe, with other offices in the vicinity doing nothing to save said black man. Then, not being charged for murder until after protests start in order to demand justice for yet another pointless death of a black American.

As a Brit, I won’t be aware of all the tragic deaths of black people at the hands of the police in America, but some are so bad that they are global news, much like George Floyd. The ones that have really stood out over the years, but by no means is anywhere near a complete list, are:

Amber Guyger, a police officer at the time, somehow managed to shoot and kill her unarmed black neighbour while he was in his own apartment. Her excuse, she thought that was her apartment, even though she was on a different floor.

The video of the killing of this 12-year-old boy playing in the park was shocking. They appear to just shoot the kid without any attempts to evaluate the situation. This spurred Tamir’s mother to help create a guidebook for how children should behave when dealing with the police. This isn’t how society is meant to function. We’re not meant to be teaching our children that the police aren’t safe to interact with.

Much like how the knee to the back of the neck resulted in the death of George Floyd, an illegal chokehold performed by an NYPD cop ended the life of Eric Garner, all because he was selling cigarettes.

Luckily, this is one of the rare occasions where the police shot an unarmed black man and they didn’t die. Nevertheless, it’s still a shocking story. Charles Kinsey was the carer of a person on the autistic spectrum. While on the ground with his hands visibly in the are, Charles Kinsey tried to explain the situation to the police who for some reason still felt the need to shoot him. 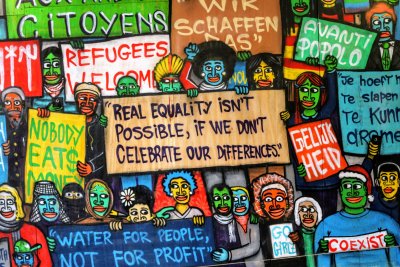 Anyone familiar with me and my blog will know I’ve had to put up with discrimination my entire life, but during my childhood, it was especially damaging. The racism I was subjected to growing up broke me, leading me to be suicidal by the age of eight. That experience has left a permanent mark on who I am, and I still, at close to 40, haven’t recovered from what happened to me.

An experience also shared by @FaizablogsUK whose blog can be found here. 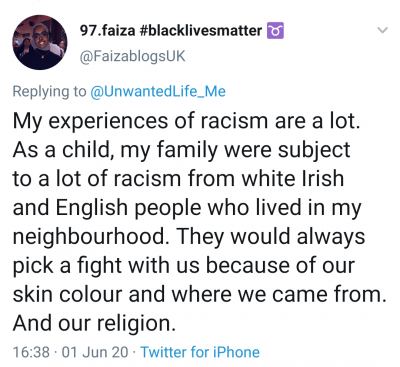 I also talked about how there were spikes in hate crimes as a result of Brexit in a previous post because it’s hard to feel safe in a country that hates the people they view as alien, which is anyone who doesn’t look like their idealised version of British whiteness. Even the coronavirus has brought with it a rise in hate crimes, although it’s not just Asian people who are being targeted as you would expect. As always with these kinds of events, antisemitism is always present.

My personal experience of discrimination hasn’t been limited to the colour of my skin, I’ve also experienced discrimination for being a man with an eating disorder. I’d brought up my issues with food that ranged from starting myself most days through my 20s to binge eating and starvation cycles in my 30s which lead to me developing reactive hypoglycaemia as a result. Because I wasn’t female, none of the doctors and counsellors I tried to talk to about it took me seriously, and as a result, I now have a permanent health condition that makes my life miserable: I have hypos every 2-3 hours.

The Effects Of Discrimination

There’s a huge and growing body of evidence that demonstrates how racism results in mental health problems, such as depression, as well as reducing those affected by racism ability to properly cope with severe events (The Synergi Collaborative Centre, 2018).

Paradies (2006) did a review of 138 empirical quantitative population-based studies of self-reported racism and health. The review found that racism was a factor in mental health issues and health-related behaviour problems suffered from those from an ethnic minority group. Although this is based on self-reported data, it’s not hard to believe how racism can damage your mental health, as anyone subjected to abuse can suffer damage to their mental health.

The study identified that health-related behaviours can be affected by racism, which is likely due to the fact that poor mental health results in the person not looking after themselves as they would if they weren’t struggling with poor mental health. I know when I’m having a hard time with my depression, any attempts at being healthy go out the window. This negative change to health-related behaviours will obviously have a knock-on effect down the line, which is what Paradies (2006) seems to have found evidence for as well, stating that the longitudinal studies that were reviewed highlighted a link between racism and ill health.

A cross-sectional study performed by McKenzie (2002) showed strong evidence of a link between perceived racial discrimination, psychosis, and depression in people from an ethnic minority. This is hardly surprising, abuse will claim its pound of flesh. I know that first hand.

For decades, inequalities in mental health for ethnic minorities have been a concern (Grey, Sewell, Shapiro, and Ashraf, 2013), with these inequalities leading to a disproportionate amount of black people being detained under the Mental Health Act, at over four times the rate of their white counterparts, according to NHS England (2018). This detention rate has increased from 288.7 per 100,000 population in 2018 to 306.8 per 100,000 population (NHS England, 2019).

Let’s not forget the children. Trent, Dooley, and Dougé (2019) reported that discrimination affects the self-confidence, self-esteem, and self-image of children and adolescents, impacting their mental health enough that it’ll affect developmental milestones and achievement in school. I know this first hand from my own experience (Suicidal Child #ChildrensMentalHealthWeek). America seems to want black people to live in constant fear for their lives, to the point that they can’t even feel safe in their own homes anymore. This will not only take its toll on their mental health but also their physical health as well, as stress manifests itself in the body. 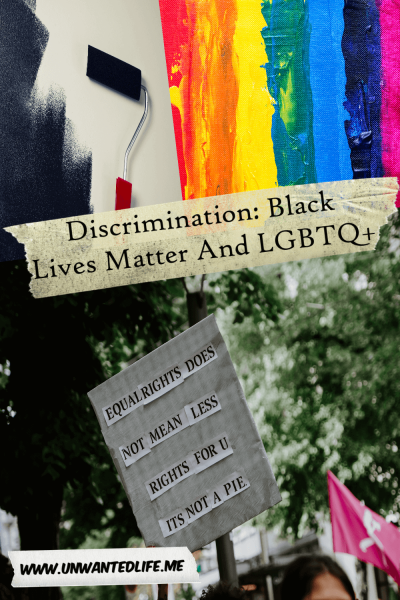 I image a lot of people would be familiar with the study that was conducted into the discrimination that occurs just because of the name you use when looking for a job. Some of you might have also experienced this problem yourself.

A job applicant with a name that sounds like it might belong to an African-American – say, Lakisha Washington or Jamal Jones – can find it harder to get a job. Despite laws against discrimination, affirmative action, a degree of employer enlightenment, and the desire by some businesses to enhance profits by hiring those most qualified regardless of race, African-Americans are twice as likely as whites to be unemployed and they earn nearly 25 percent less when they are employed

If you’d like to read the complete study ‘Whitened Résumés: Race and Self-Presentation in the Labor Market’ by Kanga, DeCellesa, Tilcsika, and Junb (2016) you can do so by clicking here.

It’s little things like this that make life harder than it needs to be, but life for an ethnic minority is full of these little issues, which all adds up to a being huge weight holding us down. White privilege is that no matter how bad your life might be (and you can still have a hard life), your life isn’t then made harder simply for the colour of your skin.

All we’re asking for is the same treatment and human rights applied fairly and justly to all of us, so we can exist without the fear we’ll be harmed or killed simply for existing. How is that too much to expect from a civilised society? 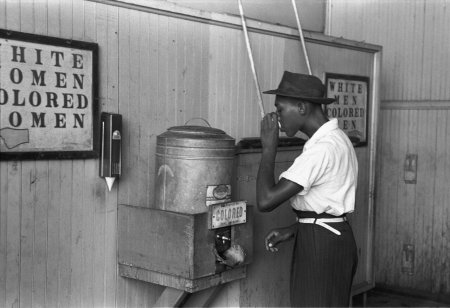 As always, leave your feedback in the comments section below. Also, feel free to share your experiences with discrimination and your thoughts about the current protests in the comments section below as well. If you want to stay up-to-date with my blog, then sign up for my newsletter below. Alternatively, get push notifications for new articles by clicking the red bell icon in the bottom right corner.

The Synergi Collaborative Centre. (2018). The impact of racism on mental health. Retrieved from https://synergicollaborativecentre.co.uk/wp-content/uploads/2017/11/The-impact-of-racism-on-mental-health-briefing-paper-1.pdf.