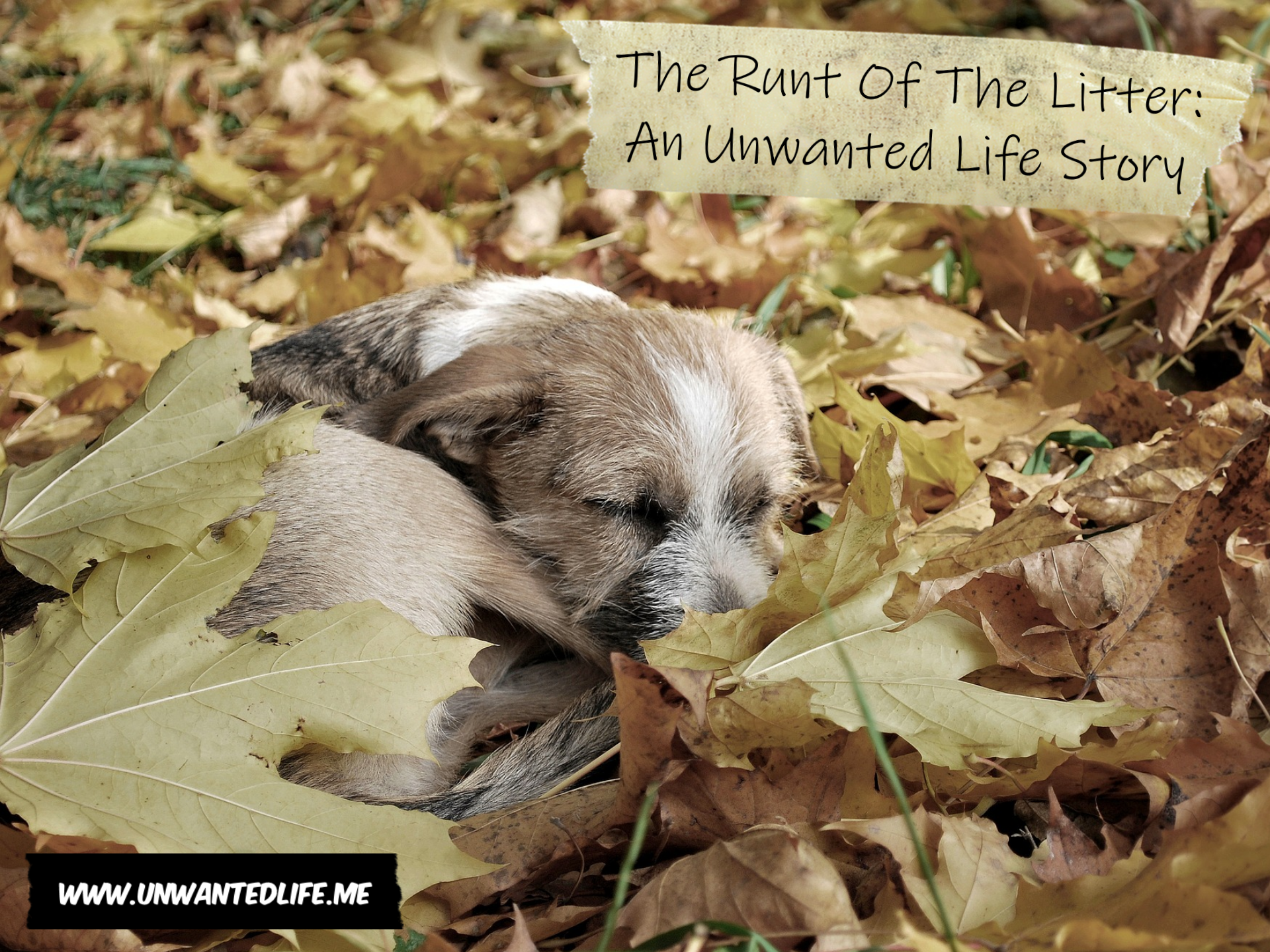 Introducing the second in the Unwanted Life story series, this time Lindsay, who blogs over at – Live, Parent, Teach, Repeat – shares her story with us of feeling like the unwanted runt of the litter.

But that’s enough from me, so without further ado, here’s Lindsay’s story in her own words. 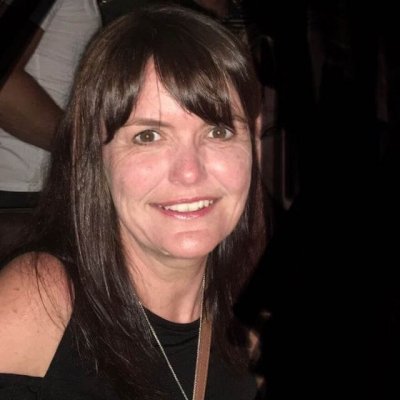 I have few memories of my schooldays but one stands out. It was parents’ evening at secondary school (Year 5 in old money) and my GCSE English coursework was available for my dad to read. At the time I was excited for him to read my literary endeavours; I considered this to be my most productive period! I just loved to write. However, I’d forgotten about one particular piece. To this day, I can still remember how it ended.

And I can still remember my dad’s reaction. I was detailing a family situation and how I felt to be a member of this clan. I’d never talked about it before. That was something I didn’t do. But I could write about it easily and clearly. And after reading it, my dad walked up to me and said, “You are not the runt of the litter.” This is the story.

The Runt Of The Litter?

My father’s side of the family is Catholic. My grandma was an Irish Catholic. My abiding memory of her is struggling to understand a word she said because decades in West Cumbria had done nothing to dilute her County Tipperary accent. My grandfather was Whitehaven born, originally Church of England but he changed his allegiance to Catholicism on marrying his Gaelic bride. They say the converts are the worst.

So I was born into a half Catholic, half ‘couldn’t give a monkeys’ family. My dad was severely lapsed by this point; I have memories of nuns knocking at the door to try and persuade him to return to the church. They gave up after a while. I’m not quite sure if it was the stench of cigarette smoke or his unwavering stubbornness which eventually drove them away.

My mother’s side of the family saw the church as the place down the road where you went for christenings, weddings and funerals. And possibly where there was a free babysitting service on Sunday mornings so parents got some peace. For years, this information was lost to me. I had no real awareness that there was a difference between myself and my dad’s nieces and nephews. But it soon became clear. 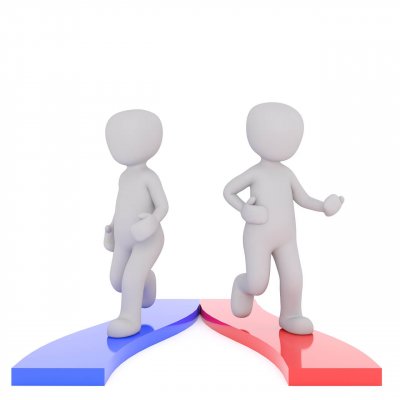 For I had been baptised Church of England and in 1974, as far as my zealot of a grandfather was concerned, this seemed to be on a par with murder. There were arguments. Half of the family refused to come to the church. Hang on, wasn’t it the same god? And when it was pointed out to my grandparents that they would miss out on seeing their new granddaughter grow up if their attitude persisted, the reply was that they wouldn’t miss what they’d never had. All in the name of religion.

It was only years later that I learned this. In the intervening period, I yearned to be Catholic. I wanted to be able to talk to my cousins about mass, confession and the ritual of confirmation. I remember my fascination with the white dresses and adopting a saint’s name for the occasion. Maybe if I was Catholic my grandparents would love me. I sometimes felt angry with my parents that they hadn’t made me the same as everyone else. I continued to feel this constant divide; most of the Kelly side of the family was lost to me because of a religious chasm.

As you age, you see things differently. And I gradually came to see that I was worthy. I was polite, I behaved, I tried hard at school; I was a granddaughter of which they should be proud. And as I compared myself to my cousins and saw no real inferiority on my part, sadness for what could have been was replaced by the anger of the stupidity of what hadn’t been.

I escaped to university. To the city where my grandparents had lived and had their first two children. Did my subconscious think this might make them love me a bit more by choosing Edinburgh? If so, my conscious decision that they weren’t deserving of me and I ceased what little contact we had.

I didn’t go to my grandfather’s funeral. I felt no guilt. He had been baptised the same as me so who was he to judge, belittle, reject? Six weeks after his passing, I went to my grandmother’s funeral and I can’t explain why. Why go to one and not the other? Maybe because it wasn’t her who argued frequently with my dad over religion in front of me, causing my dad to storm out, with me in tow, before he said something he regretted? Maybe because I have one memory of her walking up our hill from her house in the valley to deliver my birthday present on time? But then it was her who had said she wouldn’t miss having me in her life.

Deep down, on that dismal day in March, I still think I was maybe looking for some form of acceptance. Look at me, Grandma. I’m in a Catholic Church. Am I doing everything right?

So they never had me and I doubt they did miss me. They had plenty of other grandchildren of the correct denomination to be proud of. Having had no grandparents on my maternal side for completely different reasons, I am sad when I hear my husband talk fondly of his childhood memories of Nan, Frank, Dolly and Stan.

But, in an ironic twist of fate, I find myself working in a Catholic school. And again, I find myself asking, can you see me? Look where I’m working! Am I good enough for you now? But when in Mass with my students, I do find myself feeling inferior again, watching in awe the 11-year-olds taking Holy Communion, whilst I root myself to the seat, scared to even take the blessing because I’m not good enough and I might do something wrong. 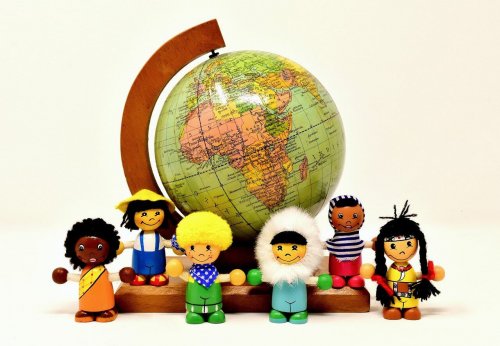 I don’t think that feeling of rejection will ever completely go away, but I can live my best life without knowing how to perform the sign of the cross or how to count prayers using beads on a necklace. Instead, I know that I will never reject any of my grandchildren based on religion, race or sexuality. And in that case, I have won. I am not the runt of the litter.

I’d like to thank Lindsay from Live, Parent, Teach, Repeat for sharing her story with my followers and me: it takes a lot of courage to open up about such experiences. But at the same time, sharing such personal stories can make people aware that they too might not be in a situation that’s good for their mental wellbeing, and show them they’re also not alone in this. I know for me, I had a somewhat similar experience being the only black person in my family and school (Suicidal Child #ChildrensMentalHealthWeek). I guess for me it was less the runt of the litter and more the literal black sheep.

So if you’d like to show your appreciation to Lindsay for sharing her story, and to show her that she is wanted, then why not visit her blog (Live, Parent, Teach, Repeat) or one of her social media accounts (Twitter, Facebook, or Instagram) to let her know.

As always, leave your feedback in the comments section below. Also, feel free to share your experiences of feeling unwanted or share how Lindsay’s story of feeling like the unwanted runt of the litter made you feel in the comments section below as well. If you want to stay up-to-date with my blog, then sign up for my newsletter below. Alternatively, get push notifications for new posts by clicking the red bell icon in the bottom left corner.

31 thoughts on “The Runt Of The Litter: An Unwanted Life Story”