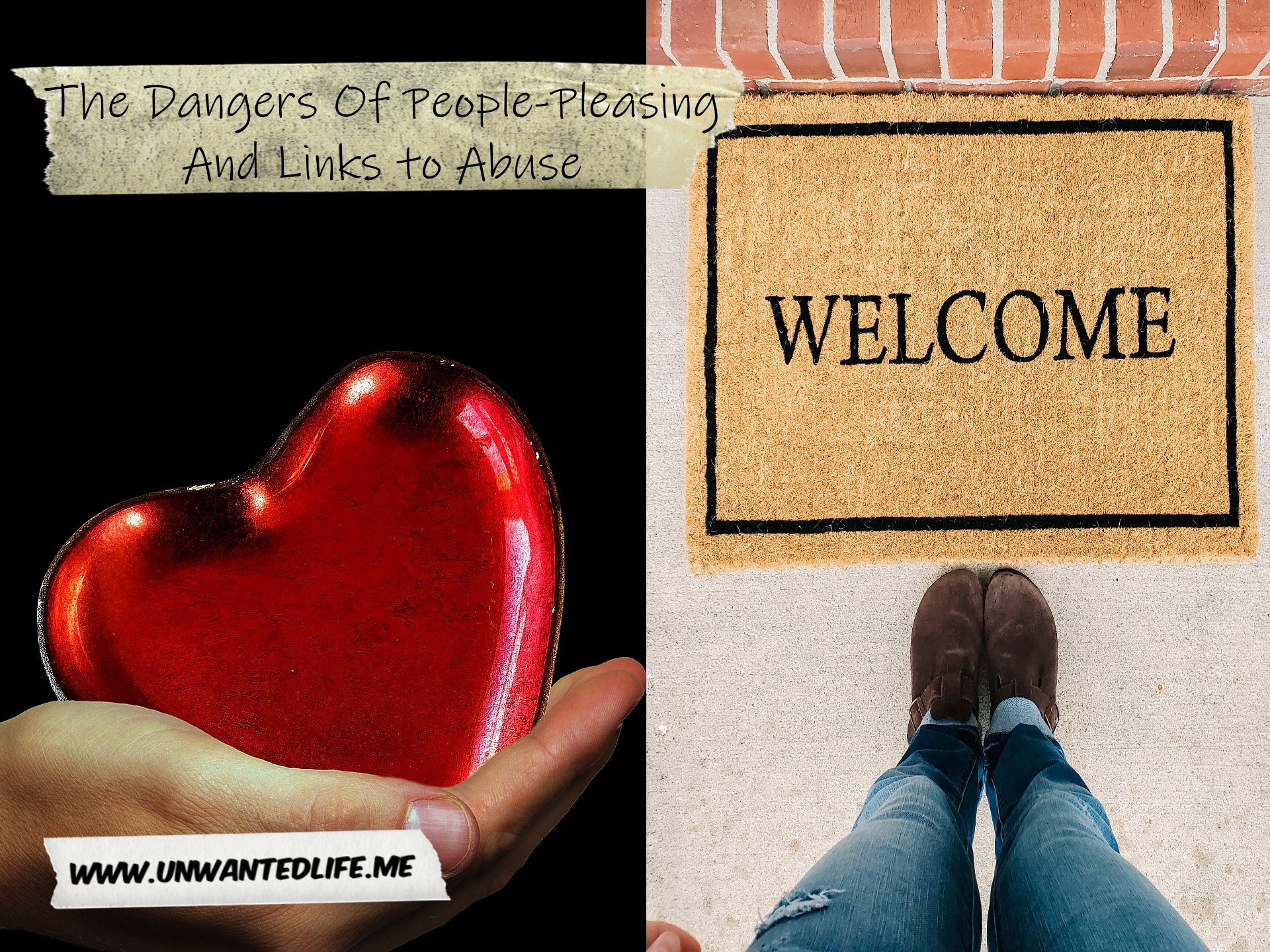 People-pleasing is a huge problem, I know because I’ve had problems with it myself. Something you might have guessed if you’ve read my article ‘Abuse: Female Perpetrators, Male Victim‘. People-pleasing and abuse often go hand-in-hand, with the former often being the result of the latter.

People-pleasing is a problem I have that was squarely a result of my borderline personality disorder. The years of racism and abuse I suffered as a child caused me to be desperate to find acceptance. However, no matter how you get into the behaviour of people-pleasing, it’ll become a habit, a habit that’ll become a way of life.

The Costs Of Being A People-Pleaser

Being a people-pleaser will always come at a cost. In order to help people identify those costs, so they can see if they’re experiencing these themselves, then I’ve made a list of signs. Hopefully, if you’re a people-pleaser, but aren’t fully aware that you are, then this list will help you come to terms with it so you can then do something about it.

Because you rarely prioritize your own self-care, you over-commit to things, commit to stuff you don’t want to do, and do things for others you know will make you feel bad. You will feel stressed out a lot.

People-pleasers will often feel burned out and stressed a lot of the time. Being like this isn’t good for anyone, but it’s especially bad for the people-pleaser. So learn to take care of yourself. For tips on stress management, visit my post ‘17 Ways To Manage Stress‘.

Doing favours for people all the time, especially when you’re agreeing to help when you don’t want to, is going to make you angry. This build-up of anger and resentment isn’t healthy.

Whilst you work on ways to deal with your issues around people-pleasing, you might also want to check out my post about managing anger as part of your self-care.

Because you’re a people-pleaser, you’ll question if your “friends” are really your friends. That’s because you feel people keep taking advantage of you. This will only get worse, and it’ll affect all your relationships eventually.

For too many people like me, the behaviour to please others comes from a sense of low self-worth and self-esteem issues. We go out of our way to help others, often at a personal cost to ourselves, all because we crave being accepted, liked, and needed. 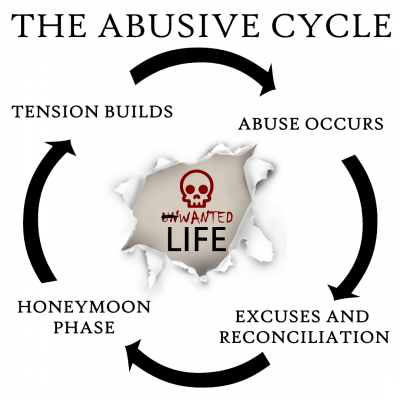 Being taken advantage of

The obvious problem with being a people-pleaser is that others will take advantage of you. Not always intentionally, or at last to begin with, but sooner or later they will.

I pretty much always knew why I went out of my way to help my friends, even at the cost of myself. I would even put my friends’ needs above my own romantic relationships. That’s because love doesn’t last (especially when it comes to my love life; Love And Borderline Personality Disorder), but friends, friends can be there for life.

Or at least that’s what I used to think. Now I see everyone as an acquaintance, rather than a friend. Thus, in order to help others identify if they have a people-pleasing problem, I thought I’d create the following list of signs.

Pretending to be happy

In order to help get along with everyone we meet, we try to only show positive or neutral emotions, never negative emotions. You can’t be a good people-pleaser if you don’t seem approachable because you always look upset or down. Even when that’s how you really feel on the inside.

If you’re anything like me, you’ll even smile and try to be a part of the joke, even if the joke was made at your expense. When I was suffering racist abuse as a child (Suicidal Child #ChildrensMentalHealthWeek), I would smile and play along like it didn’t bother me, all because I wanted to be accepted.

What you want doesn’t matter

Even if someone asks you what you want, you flip the question back to them instead of you saying what you want. You’ll also avoid offering your own opinions and suggestions as well because what you want and what you have to say don’t matter. Does that sound familiar to you? I know it does to me.

Often, people-pleasers do this in order to avoid a disagreement with the other person(s). But doing this means you’ll rarely ever get what you want, and you’ll only do things other people want.

Going with the flow

Going with the flow is ok, to a certain extent. But again, you’ll end up just doing what everyone else wants. You’ll never do what you want if you never state what you’d like to do.

Furthermore, if you go with the flow so often, you’ll eventually forget what it is you want as an individual.

Using active listening and other positive listening skills is a good way to socialise, especially if you don’t agree with the other person(s) opinions. However, it becomes a problem if you’re also agreeing with these opinions when you actually don’t.

Because people-pleasers want to be liked and to be accepted, they can find themselves pretending to agree with opinions and behaviours we don’t actually believe. This can also get you into a lot of trouble if you’re not careful.

For example, you could find yourself talking behind someone’s back, saying and agreeing to comments you don’t actually believe to be true. This could put your relationship with that person at risk, especially if they find out.

Other people’s feelings are somehow your responsibility

That’s not to say that you shouldn’t be aware of how your comments and actions affect other people, but take it to a whole other level by believing that you have to make another person(s) happy. It isn’t your job to make someone else happy, especially at a cost to yourself. Everyone is in charge of their own emotions.

Saying sorry all the time for being you. Do you fear that other people blame you or do you blame yourself, and thus you feel you have to apologise all the time? If so, you could have a people-pleasing problem. 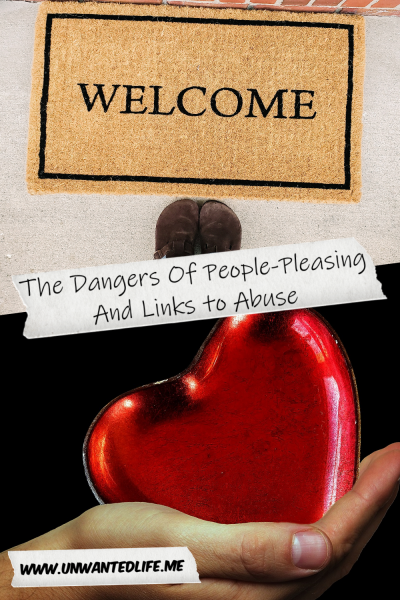 Taking on too much

One of the problems with being a people-pleaser is that you often take on too much, risking burnout. Agreeing to help other people and going to events/activities that other people want you to do. If that sounds familiar, then you may have issues with people-pleasing. Make sure you spend your time, especially your free time, the way you want to. Your self-care is important.

Get out of jail free card

Being part of the joke

Like I said earlier, when I was a child (Suicidal Child #ChildrensMentalHealthWeek) I had to pretend I wasn’t hurt by the racist comments said to me, and pretended to be part of the “joke”. We do stuff like this because we don’t value our emotions.

However, if you aren’t able to communicate your real feelings then you’ll have problems establishing and maintaining a healthy relationship. Denying your emotions not only affects your relationship’s healthy status but also takes its toll on you.

We all change the way we behave when we’re around different groups of people. The way we act with our best friends, our coworkers, and our partner’s parents, will be different. However, people-pleasers will go above and beyond to act differently if it’ll make others happier or help them feel a part of the group.

For example, you might drink more when you go out with your friends because that’s what they expect of you, even though you don’t want to drink that excessively. Ring any bells?

People-pleasers will often self-sabotage themselves and their goals. That’s because their needs aren’t seen as important. Have you noticed yourself doing that?

If your self-worth and self-esteem are dependent on praise from other people, then you most likely have a problem with people-pleasing. I know I’ve always had problems with external validation.

You’ll never be truly happy unless internal validation is enough for you.

Getting into a conflict situation isn’t fun, but if you try to do everything you can to avoid such a situation, then you could have a problem with people-pleasing.

Don’t be angry with me

People-pleasers don’t want other people to be angry with them or hold any negative feelings towards them for that matter. The problem is, you can’t control how others feel. Plus you might not have done anything wrong in the first place.

If you can’t handle the thought that someone is angry with you for some reason, then you could have issues with being a people-pleaser.

This one’s self-explanatory. If you fear being rejected for being yourself, then you most likely have problems with being a people-pleaser.

Stay tuned for my post next week to get more advice, and tips, on how to overcome people-pleasing.

As always, leave your feedback in the comments section below. Also, feel free to share your experiences with people-pleasing and boundaries in the comments section below as well. If you want to stay up-to-date with my blog, then sign up for my newsletter below. Alternatively, get push notifications of new articles by clicking the red bell icon in the bottom right corner.