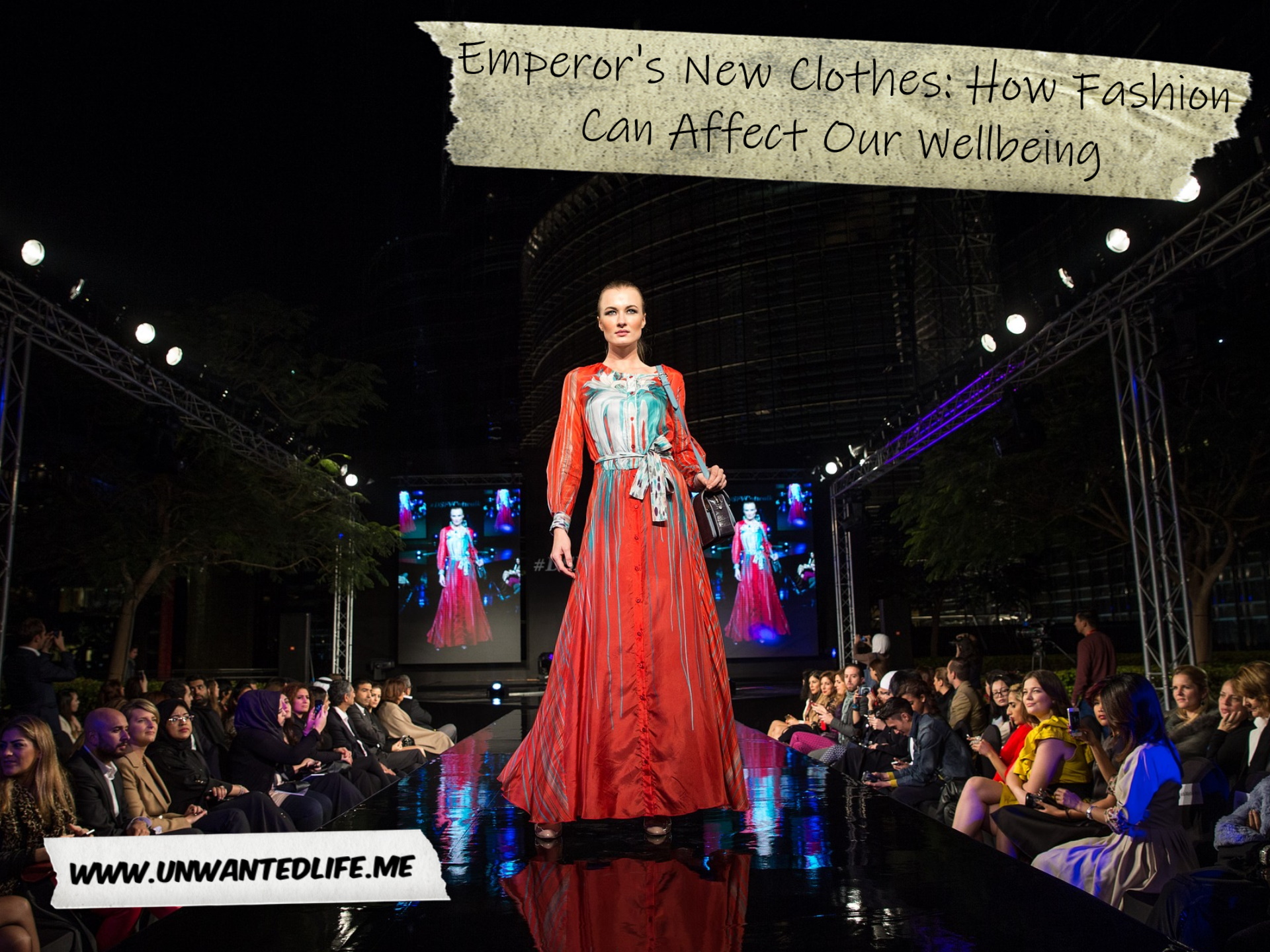 Have you heard the story about the two swindlers who tricked an emperor into paying for lavish clothing that were invisible to people who were stupid or incompetent? It doesn’t matter if you haven’t. I just thought it made for an interesting analogy. After all, fast fashion has us sold on the idea that we have to keep buying new clothes each year, often each season. Besides the environment cost of doing this, what are the mental health consequences of buying into this fashion ideology?

We live in a world where our appearance plays a big role in how society treats us. Attractiveness and our appearance can have such a powerful effect on society that it’s often referred to as the halo effect. The halo effect is where people fall for a cognitive bias which influences our overall impression of someone and how we judge their character to be (Very Well Mind).

It pays to be attractive, in more ways than one. And I mean that literally. One study found that in the labour market, being attractive can result in a pay that’s up to 15% better than those seen as plain or unattractive (Hamermesh and Biddle, 1993). Even Attractive CEOs can benefit from a 9% bonus according to a sample of 450 publicly traded companies in Germany (Kraft, 2012).

In the same way physical attractiveness can cause a halo effect, fashion and the way we dress can trigger the same response. This is the reason defendants in courts cases and people attending interviews dress smart.

The Problems With Fashion And Mental Health

In some circles, not wearing the latest fashion or the right brands can see you excluded from those social circles. This can cause people to experience pressure to conform to the expected fashion styles of their peers. Failure to do so can cause us great anguish and harm to our mental wellbeing.

During the mid 00s, the UK government, businesses, and schools clamped down on hoodies because people associated hoodies with being a thug. It’s actually still a problem today in some areas. Society has a lot of stereotypes about the way people dress. These stereotypes can have a knock on effect our wellbeing.

But it doesn’t stop at people being seen as thugs for wearing hoodies. There’s the other problem relating to people not wearing the right clothes for their size or age, like that’s an actual thing. How many of us have tried something on but decided against it because of a fear of what others might say or think about how it fits us, real or imagined? 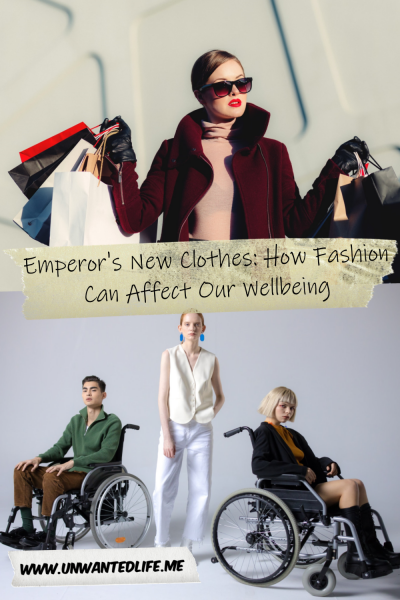 Body image plays a big role in fashion, or rather how we use our clothes to fit into society. Conforming ourselves to beauty standards, which are often unrealistic thanks to editing and filters, chips a way at our self-esteem and overall mental health (Health Shots). What we wear or choose not to wear can, in some cases, can cause mental health conditions to develop over time.

People working in fashion can also see their mental health negatively affected. According to The Recovery Village, the fast-paced and public nature of fashion could be part of the contributing factors to the higher-than-average amount of mental health disorders among people working within the fashion industry. Models are known for eating disorders, but designers can also become depressed, anxious, or develop an addiction in attempts to remain relevant in the industry.

According to The Business of Fashion, the fashion business is a notoriously difficult to break into. People trying to break in will work long hours for little pay, which is seen as the price of admission. So while it might seem glamours from the outside, it’s often lonely and stressful on the inside.

The Positives Fashion Can Have On Mental Health

As much as fashion can affect our mental health in negative ways, it can also have benefits for some. Some people can feel invisible, and one way of making sure you’re not is to dress so people can’t ignore you.

Clothes can be used to show the world who we are; a statement of our identities. People from the LGBTQIA+ community benefit from this by showing who they really are through how they dress, regardless of what society thinks. Social norms are there to be changed after all.

However, embracing and showcasing who you are with how you dress isn’t always easy for everyone, such as for people with disabilities. But things are changing. Businesses like Rebirth Garments, Unhidden, and Intimately seek to make clothes available for people of all shapes, sizes, gender identity, physical ability, and disability.

For me, finding my home in the metalhead alt subculture allowed me to dress in a way I feel most comfortable after years of struggling with my identity as a person of mixed ethnicity who grew up being hated for being black. I had found my identity in metal and some 20+ years later I’m still dressing the same way. My clothes make a clear statement of who I am, and I wouldn’t change my style for anyone.

The same should be true for anyone, whether you’re a member of the LGBTQIA+ community, a goth, disabled, or anything. Let people express their identity free from outdated notions and the halo effect. 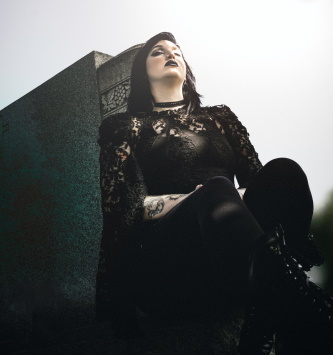 Traditionally, dresses have been used to communicate specific information, such as one’s gender (Akdemir, 2018). But pre-twentieth century, all children would wear dresses until they were six, and in the 1910s, pink was considered a boy’s colour (Britannica). We accept men in kilts, so why not in dresses as well?

Let’s not forget, it wasn’t that long ago when it was frowned upon for women to wear trousers (pants for my American readers), either. In western society at least. This made wearing trousers a symbol of the women’s rights movement.

Trousers for women weren’t an acceptable everyday clothing option until the mid-twentieth century (Britannica). Before then, areas of the US in the nineteenth and twentieth centuries passed legislation banning women from wearing trousers (Wikipedia). However, there are still schools that ban girls from being able to wear trousers as part of their uniform to this day.

Just to highlight how absurd this is, the Henley Royal Regatta, an Oxfordshire based rowing event, has only started allowing women to wear trousers to the event in 2021 (Independent).

Women have been calling for equal rights at home, at work, and with the clothes for centuries. In the 1850s, the women’s movement took on the fight for women to wear trousers (Quartz). Elizabeth Smith Miller, a Suffragette, was credited as the first modern woman to wear trousers (LoveToKnow).

Although we had a movement for the acceptance of women to wear whatever they want, we don’t seem to have the same equality of clothes for all. But we should. Clothes shouldn’t be gender specific anymore.

One last potential of fashion is that, much like any hobby or creative activity, fashion can be therapeutic and making clothes and mending them is no different. Or, as the Clothes Doctor put it, washing, mending, and decluttering our clothes can encourage mindfulness, and reduce feelings of stress and anxiety. That’s because repairing clothes can give us a sense of accomplishment.

To sum up, throughout history, fashion has helped us express our identity. Fashion has been used to show membership to a subculture or to the dominant culture. Clothes have also been used as political statements in the fight for quality and recognition of one’s true self.

Now, in the twenty-first century, clothes are being made more inclusive for all while dismantling the stereotypes. I met my first three serious partners wearing a skirt, and god knows they’re great to wear in summer. So much cooler on your nether regions. Even David Beckham wore a sarong in the late 90s, and he’s considered one of the sexiest men alive.

In short, dress the way you want and show who you really are.

As always, leave your feedback in the comments section below. Also, please share your experiences with fashion affecting your wellbeing in the comments section below as well. Don’t forget, if you want to stay up-to-date with my blog, then sign up for my newsletter below. Alternatively, get push notifications for new articles by clicking the red bell icon in the bottom right corner.

40 thoughts on “Emperor’s New Clothes: How Fashion Can Affect Our Wellbeing”