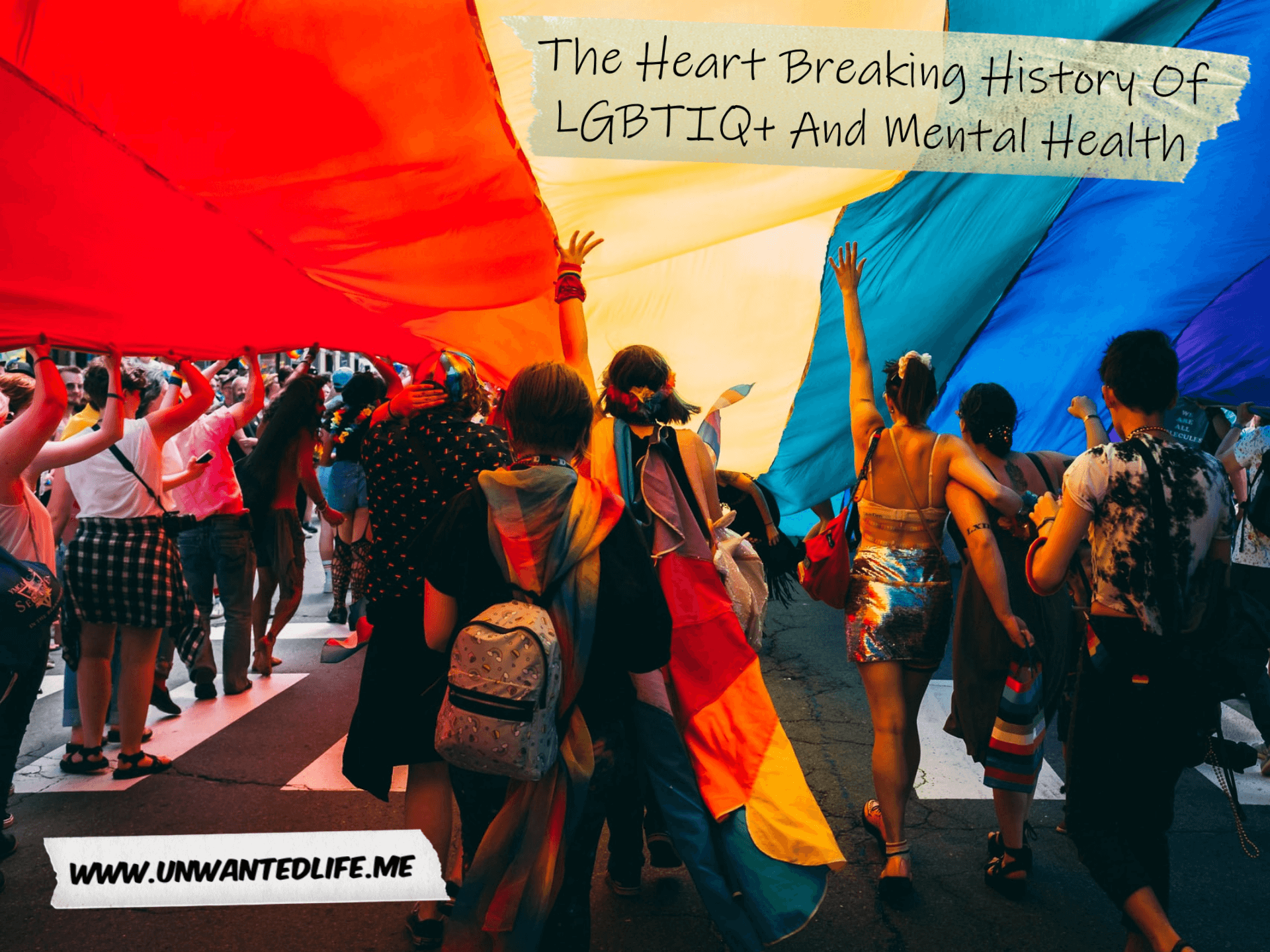 As someone who’s a cis straight male, I wasn’t sure if I should write about the LGBTIQ+ community and mental health for pride month, because I’m not part of the community. However, I’ve decided, rightly or wrongly, to talk about this topic, largely because of my mum’s abhorrent views on LGBTIQ+ people (and other marginalised groups). I want to do my bit to avoid more people becoming like her and having those kinds of views. Thus, here’s my attempt at talking about a topic I have no personal experience of.

Although some mark 1973 as the date that homosexuality stopped being classified as a mental health condition, changing to a “sexual orientation disturbance” in DSM II (Carr and Spandler, 2019), a rose by any other name moment if you ask me, 1987 is the date it was completely removed from the DSM.

The World Health Organization (WHO) only removed homosexuality from its International Statistical Classification of Diseases (ICD) classification in 1992 (Psychology Today). That meant that while I was at primary school enduring racist abuse, the American Psychiatric Association (APA) had been putting off declassifying homosexuality as a mental health issue in all its forms. I then made it to high school before the WHO had decided to follow suit. It’s sad to know that during my lifetime, this was still up for debate.

Furthermore, the WHO still classified transgender as a mental health condition right up until 2019 (Time and BBC). The problem with this very recent change with regards to being transgender is that the now outdated clarification is still being used by many countries. For example, in Japan, if you want to transition, you have to have a diagnosis of “gender identity disorder” and get sterilised if they want to be legally recognised (Time).

Then there’s the fact that homosexuality was a crime. It wasn’t until 1967 that homosexuality was decriminalised here in England and Wales, 1980 for Scotland, and 1982 for Northern Ireland (UK Parliament). Same-sex marriage came into law many years later in 2014 for England and Wales (Gov.UK). Scotland also legalised same-sex marriage in 2014 (Wikipedia), with Northern Ireland coming in in 2020 (Wikipedia).

One of the defining moments in LGBTIQ+ history that sparked revolutionary thoughts the world over was the Stonewall Riots in New York in 1969. It’s hard to believe that there used to be a law that required people to wear at least three items of gender-appropriate clothing, but there was such a law. As a result of this law, some of the patrons of the Stonewall Inn were arrested for not dressing as the state deemed they should (Britannica). However, this turned a corner for the community by arresting these people. They weren’t going to take it anymore, enough was enough, and the rest is history, as they say.

For the longest time, being LGBTIQ+ was either a criminal office, a mental health disorder, or both. In 69 UN countries, it is still a criminal office to engage in consensual same-sex activities (ILGA World). It’s been a long hard road getting equality and justice for the LGBTIQ+ community, but unfortunately, the journey isn’t complete, there’s still a long way to go. 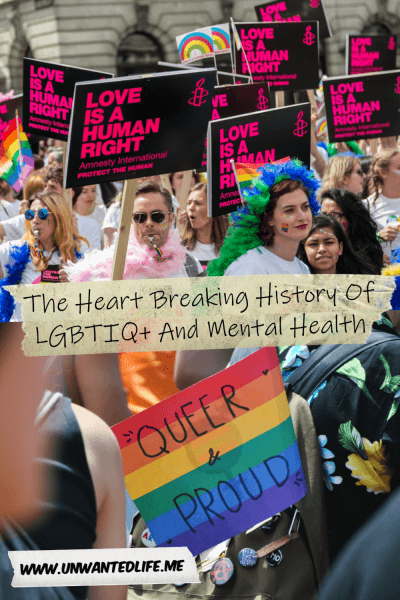 Although I’m not using this as an excuse, but to provide context, I grew up when casual homophobia was a thing. When you made jokes about your friends, it was a gay joke. If something was weird or you didn’t like it, that was gay. Even though I never had a problem with people from the LGBTIQ+ community, even kissing a few guys in my time and meeting my first three girlfriends while I was wearing a full-length skirt, I still engaged in that casual homophobia, to my enteral shame. You’d think I’d know better from having to join in with causal racism to stop being the butt of the joke, to being part of the joke, in the hopes I’d be accepted, even though it killed me inside to do so.

To this day, I still let the occasional “that’s gay” comment slip out because I used to say that a lot during the 80s and 90s. I always verbally chastise myself when it slips out, however, because I don’t want to say those kinds of things anymore. I’m way better than I used to be, but it’s still an ongoing process to do better and to be better. It’s never too late to change. One things for sure, I’ll always strive to be better and do better for the LGBTIQ+ community and for all marginalised people.

First off, being LGBTIQ+ doesn’t cause mental health problems, but the struggles they may have to go through because they’re LGBTIQ+ might cause them to develop mental health issues. Much like for me, I’m black and I’ve had mental health problems almost my entire life, but they weren’t caused by me being black, they were caused by other people having an issue with me being black. Then they made my life miserable because of their issue with my skin colour. These kinds of people are people like my mum, who hold outdated and illogical views that they used to deny human rights to others.

Whereas for me it was racism, for people who are LGBTIQ+ it’s commonly known as homophobia, biphobia, and transphobia, although there might be other discrimination classifications, I’m might just not be aware of them.

A survey conducted in a partnership between Stonewall and YouGov (Bachmann and Gooch, 2018) into the LGBT community involving over 5000 participants found some interesting statistics in regards to mental health, which were:

This is supported by Rethink Mental Health who stated that gay and bisexual men are four times more likely to try to take their own life than the rest of the population. Rethink Mental Health also stated that LGBTIQ+ people are one and half times more likely to develop depression and anxiety compared to the rest of the population.

This review shows that among young LGBTQ+ people, these experiences were respectively 3.74 times and 2.67 times higher than their heterosexual cisgender counterparts. Furthermore, the link between victimisation and self-harm and/or suicide also appears to be more common among young LGBTQ+ people than their heterosexual cisgender peers. As I said before, we still have a long way to go to reach equality.

Families are meant to be a place of safety for us, but for people from the LGBTIQ+ community, that isn’t always the case. Sometimes the victimisation can start at home. For some LGBTIQ+ members, families can be a source of stress due to the pressure to please their parents, resulting in them hiding who they are to please them. A family that has good communication and acceptance, however, is how you avoid such situations, without it, the family can become a destructive force to wellbeing of the person from the LGBTIQ+ community (Gabb, McDermott, Eastham, and Hanbury, 2020).

For LGBTIQ+ members who are also from an ethnic minority group, they can experience additional discrimination. A study by Schmitz, Robinson, Tabler, Welch, and Rafaqut (2020) composed of 41 in-depth interviews of LGBTIQ+ Latino/a young adults found that they experienced structural racism as well as gender policing and anti-LGBTIQ+ religious messages. This study highlights the double whammy of discrimination that ethnic minority LGBTIQ+ members can endure, putting more strain on their mental wellbeing.

If you’re a member of the LGBTIQ+ community and would be willing to share your story of being made to feel unwanted and the effect that had on your mental wellbeing, then I’d love to share your story on my site. You can contact me through any of my social media accounts or visit my Contact page. Also, feel free to check out the stories I have on my site already by clicking here.

As always, leave your feedback in the comments section below. Also, feel free to share your experiences of being part of the LGBTIQ+ community or run-ins with casual homophobia in the comments section below as well. Don’t forget to bookmark my site and if you want to stay up-to-date with my blog, then sign up for my newsletter below. Alternatively, get push notifications for new articles by clicking the red bell icon in the bottom right corner.

The Trevor Project US