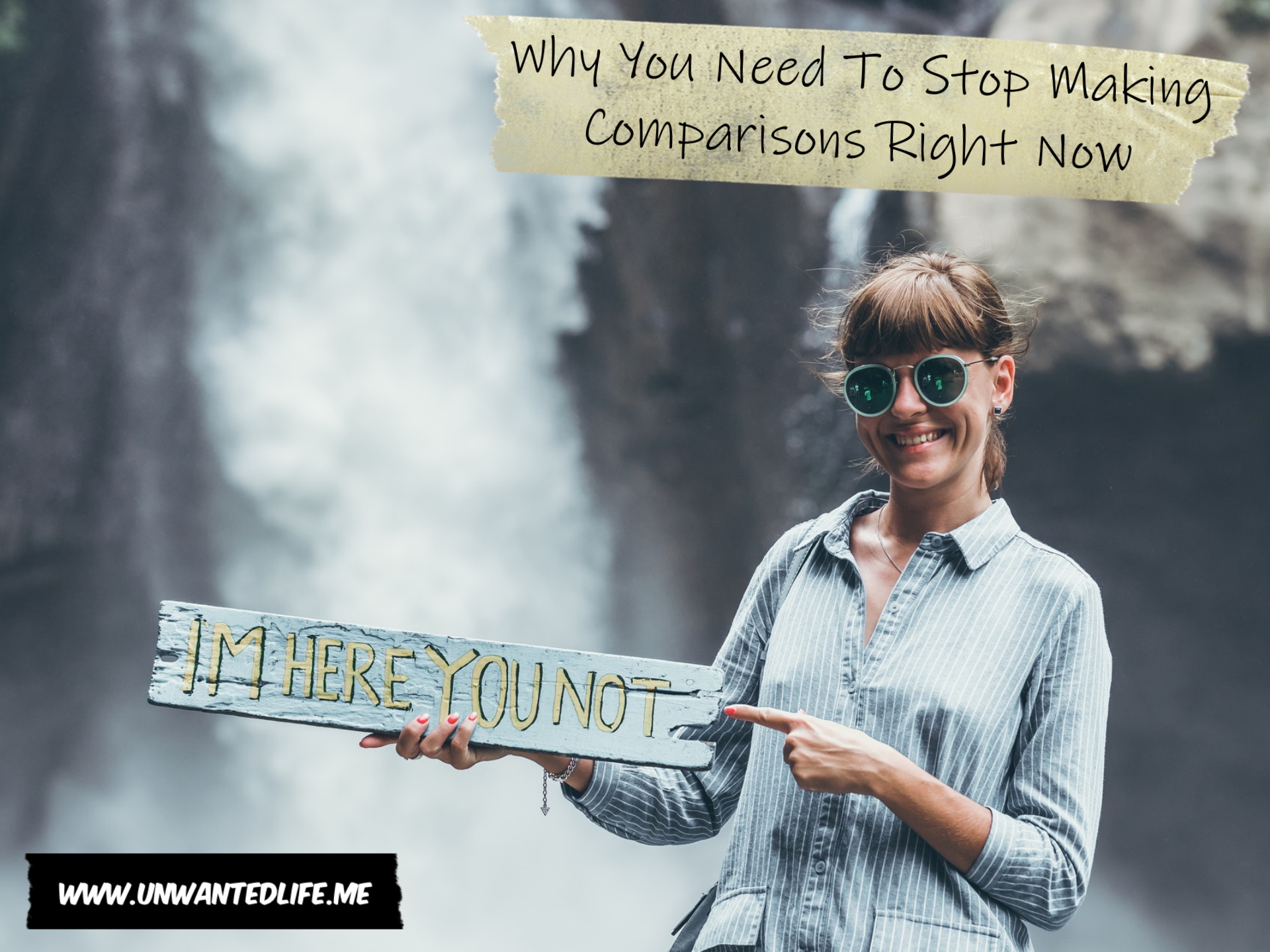 Although this is a common problem, and something I’ve done a lot myself, I wasn’t inspired to write about making comparisons until I saw this image on Facebook. So you can thank Casey for me writing this article. If I hadn’t had seen this screenshot of her tweet on Facebook, I may never have written this. 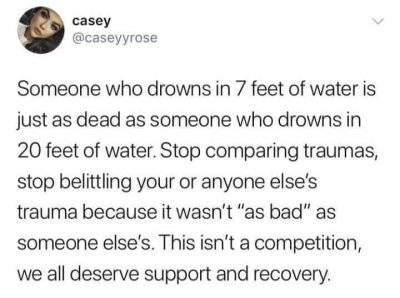 In the age of the internet and city living, social media has filled a similar role to traditional social activities. They provided ample opportunities to compare yourself with others on many characteristics, such as appearance, popularity, and success (Feinstein et al., 2013).

Thus, with the invention of social media, it has become easier for us to compare ourselves to not only celebrates but also people we know or who we are like us. This meant we could easily compare ourselves to the idealised life of our old school friends and the like on platforms like Facebook and Instagram.

Making comparison seems to be a common scenario when trying to help people or how people talk themselves out of reaching out for support. The amount of people I’ve talked to that are clearly in need of support dismissing it because someone somewhere has it worse. Or that they’d be wasting someone’s time if they reached out for support because someone worse off could have used that time. I come across this so often that I pretty much have a response memorised.

It has nothing to do with how your problems relate to other people's or how bad your issues might be, but how badly these things affect you and your quality of life as an individual Click To Tweet

The Problem With Making Comparisons

Keeping up with the Joneses is a saying for a reason. Whereby people would compare themselves with their neighbour as a benchmark for social class or the accumulation of material goods.

A study by Zhang, Howell, and Howell (2016) investigated the effects of being around wealth in the context of keeping up with the Joneses. The results were that young and poor individuals that live around wealth are the most vulnerable to engaging in social comparisons with idealised and wealthy people. This can cause young people to use their limited resources to gain possessions to convey wealth. On the other end of the scale, people who are older, wealthier, and live in relatively less wealthy areas compare themselves to those below them. But this downward look is to feel good about their situation instead.

So, whereas younger people around wealth are more likely to spend impulsively on appearing wealthy, older people compare themselves to the less wealthy, which doesn’t lead to materialistic purchases. Not only can comparisons change our behaviours and cause us to spend more, it can also cause us to become depressed.

The same can be true when seeing people at parties or on holiday when you see someone’s Instagram photos. The typical response from making comparisons in this context (that has even become a marketing angle) is the fear of missing out (FOMO). This can make you think like you’re being excluded or missing out on something, even if it’s not something you particularly care about.

A study by Feinstein et al. (2013) sort to investigate the effects of making comparisons on being stuck thinking about the same thought (rumination) and depressive symptoms. Using Facebook, they examined the tendency to ruminate and become depressed with a sample of 268 college participants. They used questions like “When I compare myself to others on Facebook, I feel. . .”. The study found that negatively comparing yourself to others can place individuals at risk for rumination and depressive symptoms.

Now imagine doing this when you’re struggling and considering asking for help. How likely are you to reach out for help if you compare yourselves to others who you see as having it worse? How often have you stopped yourself from seeking support because you’ve convinced yourself you’re not that bad because other people have it worse? That’s how effective making comparisons can be at stopping us in our tracks.

According to a study by Bessenoff (2006), making comparisons with the thin-ideal in advertisements can lead to increased body dissatisfaction, negative mood, symptoms of depression, and lowered self-esteem. Essentially, a whole industry has been bombarding us with an unrealistic beauty (that often uses filters and edits), which can be harmful to our mental wellbeing.

Feelings of annoyance and jealousy when other people accomplish stuff can also arise when making comparisons, which can make you bitter and angry. Having these emotions can create a downward spiral in your thinking as you have thoughts likes, “why doesn’t anything good happen to me?” The reality is, good things do happen to you, you’ve just fallen into a thinking error that ignores the good to focus on the bad.

Comparing ourselves to others means we’re losing control of our own behaviours and choices, as the comparisons make the choices for us. It’s also exhausting to your mental wellbeing to keep comparing yourself to others because it’s only going to make you feel bad.

You can’t win at the comparison game. There are over seven billion people in the world, so there’s a never ending list of people you can compare yourself to. As the saying goes, there is only one you, so be the best version of you you can be.

How To Stop Making Comparisons

This was something that was suggested to me during supervision as a way I help someone else to get over their guilt, which worked well. According to Healthline, you name your inner critic to give it less power and treat it as if another person was saying the nasty things to you rather than yourself. This helps you to recognise when the inner critic is speaking, allowing you to start a conversation with the intrusive thoughts.

A modifier to this is to pretend that the inner critic you’ve named is saying the nasty things to someone you care about, instead of yourself. Then ask yourself, what would you do or say if someone was saying those nasty things to someone you care about, and then apply that to yourself. This modified version can often be more successful because we’re more likely to stand up for the people we care about.

Strat tracking the things that can cause you to make comparisons with other people. Then take that list of triggers and think about how you can better manage them or avoid them.

Make a list of the people you frequently keep comparing yourself to. Then, write how it negatively affects you to compare yourself to them and why it’s a waste of your time to make these comparisons (Psychology Today).

Be your own best friend

When I was a people-pleaser, I’d go above and beyond for my friends. I don’t go that far anymore, that was unhealthy. But the point I’m trying to make is that you should treat yourself as you would any of your close friends, because that’s how you deserve to be treated by yourself and others. Embrace kindness towards yourself.

Instead of using comparisons to compare your worst qualities to someone else’s best, list your unique talents, skills, strengths, and qualities. You can do this as a journal task so you can have a record of everything. This will make it easier to reflect on them when needed.

Forget about comparing yourself to others and instead focus on doing things that will make you happy. You could pick up a new hobby or reconnect with an old one. You can also do nice little things for yourself, such as watching a movie, having a long bubble bath, or reading a book. 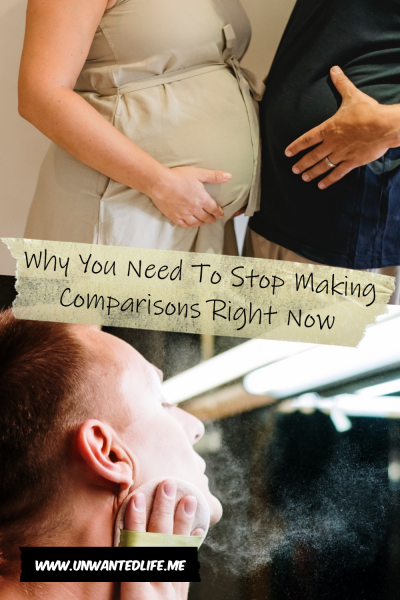 Remember that perfection is a myth. What you see on TV ad on social media is cherry picked insight into someone’s life. Photos’ and videos of celebrities, and of people on Snapchat, are often overly edited and have had filters used. Our imperfections make us special and are what people are attracted to.

Don’t get me wrong, there is nothing wrong with seeking to improve yourself, as long as it’s for the right reasons. For example, pursing knowledge should be a lifetime commitment.

One problem with making comparisons is that it can warp your thinking, causing a thinking error. Instead of comparing yourself to others, making yourself sad in the process, focus on the things you’re grateful for.

Gratitude is a great positive psychology intervention, so why not track the things you’re grateful for in a journal or use an app on your phone. Then you can keep adding new things to be grateful for, which you’ll be able to refer to when you need to.

Remember, all too often in life, we see people with their masks on, especially on social media. So stop comparing your worse self to their fake greatness. Social media doesn’t reflect reality and most people do a good job of wearing a mask to hide their problems in public.

Compete with the old version of yourself by comparing yourself to yourself, rather than the highlight reel of others. Because that road leads to self-improvement rather than making you feel bad about yourself. After all, you don’t know if the other people you’re comparing yourselves with are actually happy or just appear that way. Perceived wealth and success doesn’t always mean people are happy with their lives. You don’t know what’s going on behind their mask.

When we’re comparing ourselves with others, we can often get lost in that act and forget to celebrate the successes of the people we know and care about. To help break your habit of comparing yourself to others, start celebrating the achievements of others instead and spread the joy.

It’s not a competition

Keep reminding yourself that life isn’t a competition, as that can rob you of your happiness. You’re not going to win anything by competing with someone you’ve compared yourself to. Find your own way to be happy and pursue that.

In short, unless you’re comparing yourself to someone you admire to make yourself a better person, comparisons are bad for you. Making comparisons for any other reason than that is not only harmful to your self-esteem, but can stop you from seeking support when you need it. Use the methods in this article to help you kick the comparison habit. You can start by figuring out what makes you happy.

As always, leave your feedback in the comments section below. Also, please share your experiences with making comparisons in the comments section below as well. Don’t forget, if you want to stay up-to-date with my blog, then sign up for my newsletter below. Alternatively, get push notifications for new articles by clicking the red bell icon in the bottom right corner.