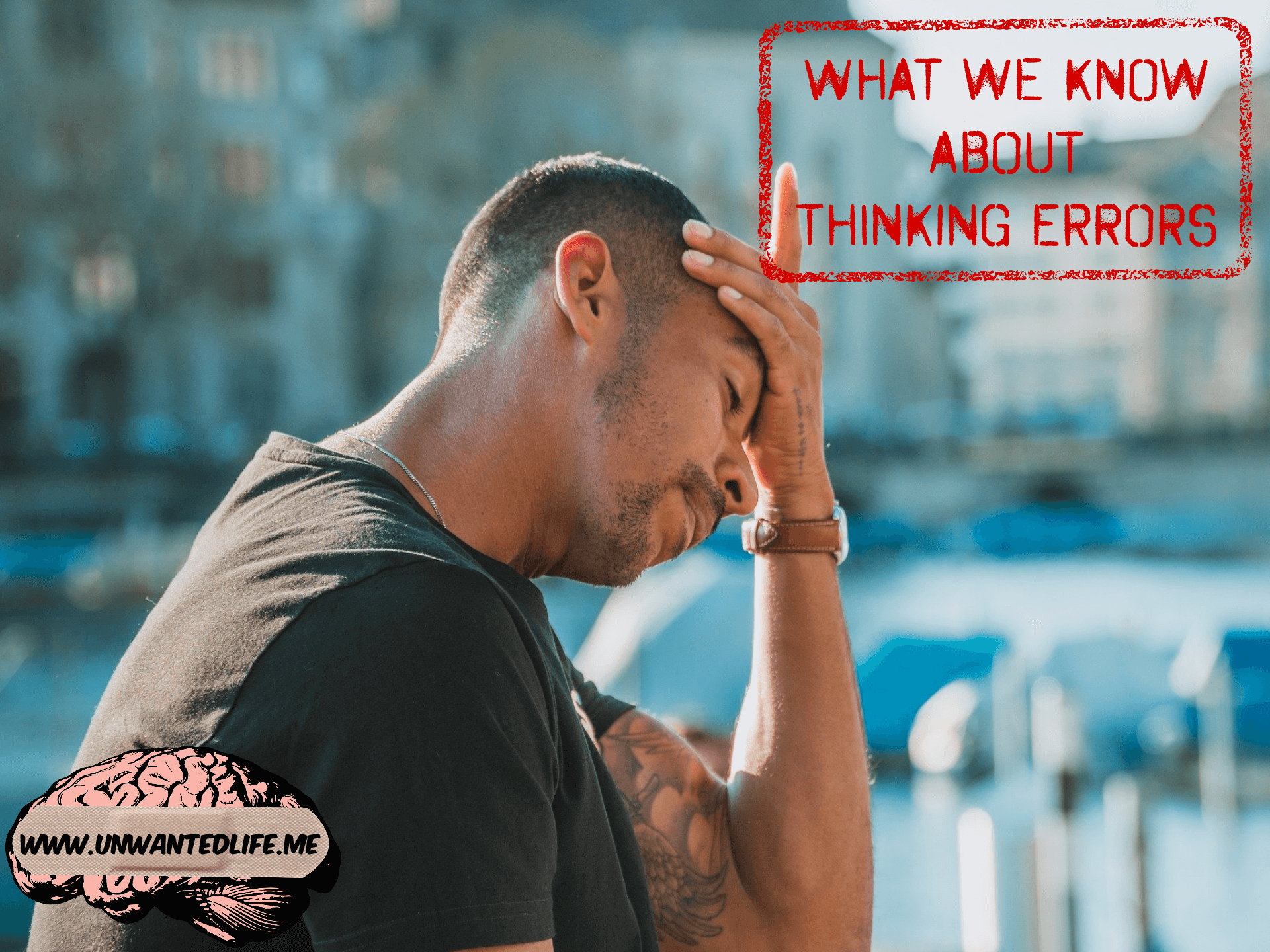 The human mind is probably the most complex thing known to mankind. But weirdly, this complex system loves to create shortcuts and is prone to errors. Our minds can develop faulty ways of thinking, or thinking errors (cognitive distortions), which are illogical. Basically, our thoughts no longer align with reality. But annoyingly, we’re largely unaware that we’ve developed these thinking errors.

Before we begin, it should be noted that a lot of these thinking errors will overlap with each other. That’s because they’re not uniquely separate errors, but rather a helpful way to label thinking that causes us harm.

What Are These Thinking Errors?

All or nothing thinking

Seeing things in black or white. This kind of thinking has no concept of the grey area that exists in the real world. You are either a success or a failure, good or evil.

Examples of all or nothing thinking:

Filtering out the positives

With this kind of thinking, you’re only able to see the negative things and you dwell on them so much that it distorts your view of a person or situation.

I imagine a lot of people with depression and other mental health issues may suffer from this way of thinking. I know I have, and still do.

An example of filtering out the positives:

You reject your own achievements and other positive experiences. You argue that these don’t count. You do this so you can maintain a negative worldview that is contradicted by your actual experiences.

I’m guilty of this kind of thinking. I don’t believe any compliment that’s given to me by someone I know, because they have a reason to lie. Little white lies exist for a reason, and we tell them to make other people feel better about themselves. I’ve engaged in white lies, and so has everyone else. Thus, I only believe in compliments if they come from strangers. My partner hates this fact.

An example of converting positives into negatives:

With this kind of thinking, you will find yourself leaping to a negative conclusion even when there’s little to no evidence that that is the case.

I am very pessimistic, so I’ve done this a lot. Weirdly, though, I’m the opposite when it comes to the other people and their possible outcomes.

Examples of jumping to negative conclusions:

You keep jumping to the absolute worst-case scenario, and often an entirely unrealistic scenario.

My partner is guilty of this one, but I’ve not really noticed this one as much for myself. Or at least I can’t recall any instances of me doing it.

An example of catastrophising:

Confusing feelings or beliefs with facts. Feelings and beliefs that aren’t supported by evidence is a dangerous things.

Again, my partner suffers from this one a lot more than me.  Although, I have these thoughts too due to my long-term depression. It’s hard not to when you’re depressed.

An example of mistaking feelings for facts:

This involves believing that you are the sole cause of everything negative around you. Even though that’s just not possible.

If you’ve experienced this kind of thinking error, then you may need to work on your personal boundaries. That’s because you might be in a codependent or abusive relationship.

An example of personalising:

This is pretty self-explanatory. You undervalue yourself and put yourself down. This kind of thinking will obviously damage your self-esteem, self-worth, and your self-confidence.

My partner and I both suffer from this kind of thinking error, and I would imagine anyone with depression or other mental health issues would do too.

Using ‘should’ like statements can lead to feelings of guilt and disappointment. If you direct them at other people, then you can end up feeling disappointed, angry, and even resentful towards them. These statements are a negative thinker’s best friend.

To be honest, I don’t really pay attention to ‘should’ type statements that I make, so I’m not sure if this is an issue for me. But apparently, they can increase anxiety and avoidance behaviours, from which I actually suffer. Not sure why this style of thinking doesn’t seem to be an issue for me. Maybe it’s because of the specific underlying belief at the core of my anxiety disorders and my drive to avoid everything.

Examples of ‘should’ statements:

With this error, you take a single event and blow it way out of proportion (turning a single event into a limitless pattern). I think this one might also explain why some people hold discriminatory views.

I know I’ve never had discriminatory views based on such thinking, or at all. But I have had the other version of this thinking, whereby one bad experience of trying to do something has then made me think I’m terrible at doing that thing. Again, I assume a lot of people struggling with mental health issues may experience this form of overgeneralising.

Exceptions to the rule

What advice would you give to a friend?

We often give better advice to others than we follow ourselves. So we need to flip the script on that. Thus, think about the advice you’d give to someone else to help overcome their thinking error(s), and apply it to yourself.

A lot of these thinking errors can be overcome if we take the time to work on our self-esteem. Which is easier said than done. I know my self-esteem is still in the toilet. So try to find ways that will allow you to build up your self-esteem.

How bad would it be if your thoughts were true?

Will it really be as bad as you think if you don’t get the job you were interviewed for? You’ve weathered tough times before, and you will again. Each time you do, you’ll buildup more resilience to the fear of failing, and help banish those thinking errors.

I know being rejected sucks, but at the same time, the only real failure is to never try at all. That doesn’t mean it’s not scary, because it is, but that’s what makes succeeding even better. Don’t worry, I also struggle to follow my own advice: do better than me.

Weirdly, I rarely prep for interviews as I generally never remember anything from that kind of preparation (or studying for that matter). So I ad-lib. But I’ve never gone to an interview thinking I won’t get the job or I’ll do badly, as I believe in my ability to think on my feet. It’s probably the only time I don’t expect the worse

You could also keep a diary to help you track your catastrophising. That way you can note down when you have them and what triggered them. This will allow you to identify warning signs so you know when to implement thinking about other possibilities, and likely more plausible, outcomes. 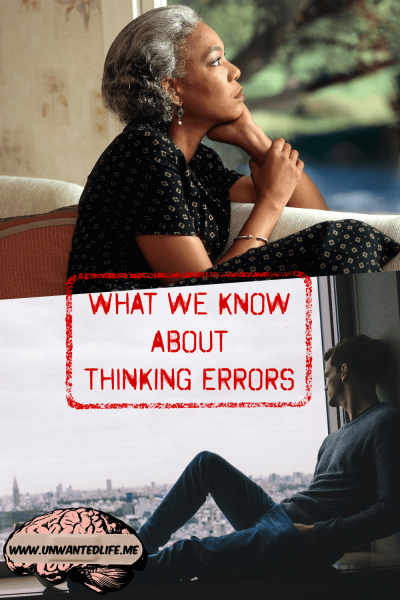 Overgeneralising is a sloppy and lazy thinking shortcut error. If you want to beat this error, then examine the evidence. Does one or two instances of something prove the norm? To answer that, you could perform an analysis of the situation. Talking to someone else about the situation can also help you reach a better conclusion.

Thinking errors: Solution for filtering out the positives

One suggestion to combat filtering is a cost-benefit analysis. A person with this distortion may want to sit down and assess whether filtering out the positive and focusing on the negative is helping or hurting them in the long run.

Humans are emotional creatures, but it’s how we interpret those emotions that can cause us problems. The way we feel isn’t an indicator of fact or truth, so remember when you feel something is true, rather than knowing something to be true, these feelings are short-lived and they will pass. Challenge your feelings to avoid this thinking error and try to ground them in evidence.

Try to remember the times when you’ve previously jumped to the incorrect conclusion, and compare that to the situation you’re making a rash conclusion about now.

Improve your ability to see the bigger and/or the whole picture, as this should help you avoid jumping to conclusions as well.

Thinking errors: Solution for ‘should’ statements

It may be helpful to write your ‘should’ statements down whenever you find yourself experiencing this thinking error. Then reframe it by writing a more realistic and positive statement. Notice how many ‘should’ statements you use throughout your day and start replacing them today.

As always, leave your feedback in the comments section below. Also, feel free to share your experiences with thinking errors, or state any you think should also be discussed, in the comments section below as well. If you want to stay up-to-date with my blog, then sign up for my newsletter below. Alternatively, get push notifications for new articles by clicking the red bell icon in the bottom right corner.

68 thoughts on “What We Know About Thinking Errors”