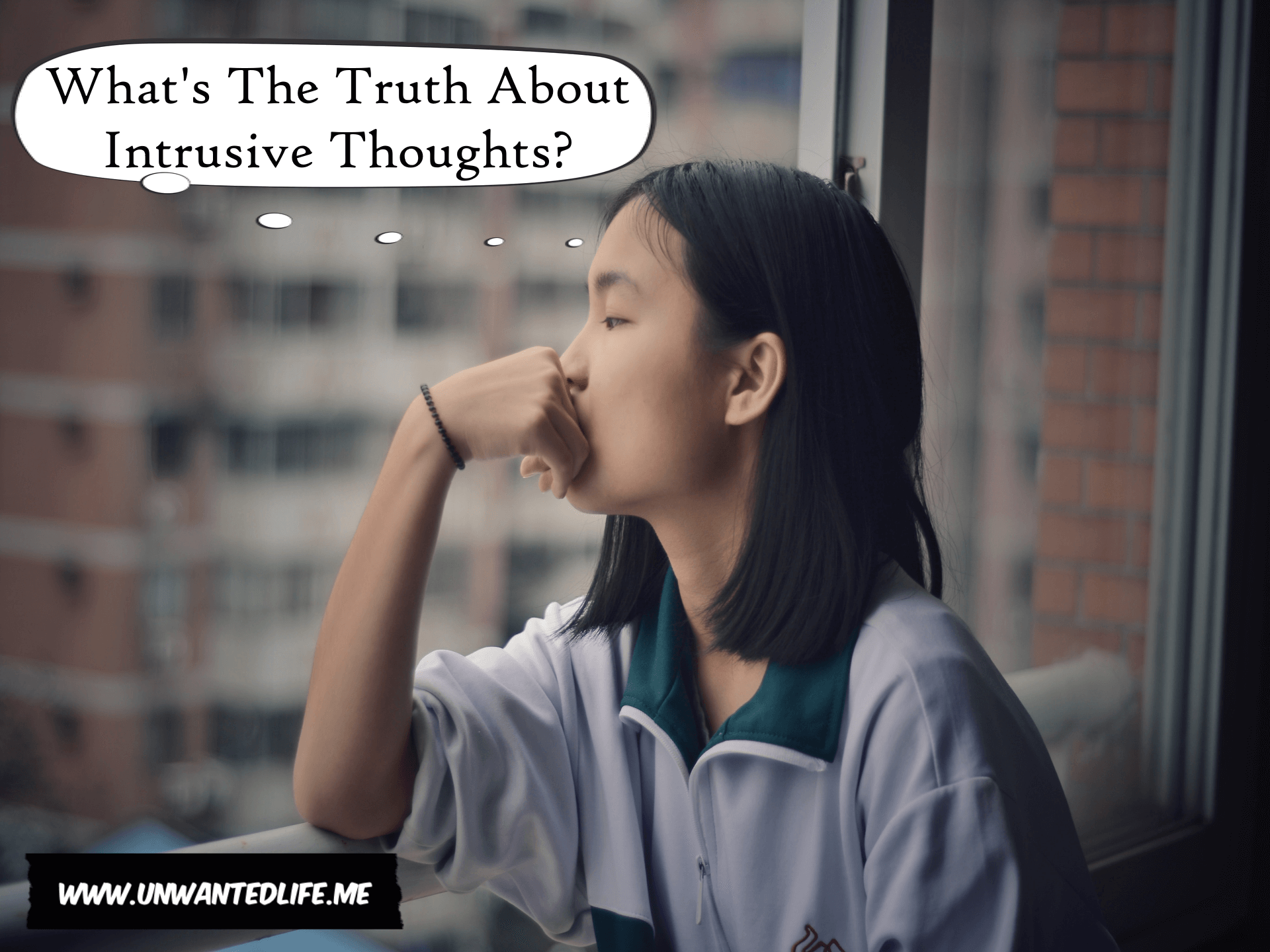 Simply put, intrusive thoughts are any thoughts that pop into our mind that don’t appear to have a link to any intentional thinking, which are often quickly forgotten (Winston and Seif, 2017). However, for some people, such thoughts aren’t easily dismissed.

However, this can differ from person to person as we’re all individuals, so we all have our own ways of reacting to such thoughts (Clark, 2018). As such, the frequency and distressing nature of these intrusive thoughts can have an effect on some people, which can lead to mental health issues.

The problem with these negative intrusive thoughts isn’t the fact that you’re having them, because that’s standard, it’s your reaction to having them that causes an issue. These thoughts, if left unchallenged and ignored, would simply pass with no problem, but when you worry about them and focus on them, or even fight them, you stop them from disappearing (Winston and Seif, 2017). You’re giving these negative thoughts power over you by giving them your energy and attention. 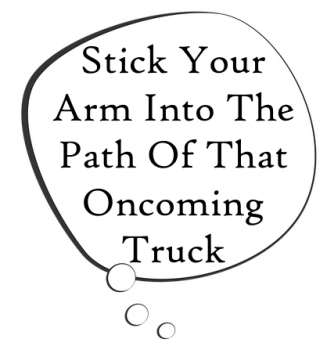 It’s understandable to be concerned about negative intrusive thoughts, especially if they’re particularly extreme in nature, as they can be upsetting. We don’t want to believe we’re capable of having these kinds of thoughts, so it can cause us to react when we have them. The problem is, these aren’t your real thoughts, so you needn’t be concerned in the first place.

Clark and Rhyno (2005) noted that the key difference between non-clinical negative intrusive thoughts and clinical ones is simply down to the degree rather than the content.

However, because we find it hard to ignore such dark thoughts, we actually turn these intrusive thoughts into a problem for ourselves. The act of rejecting it and trying to push it out of our minds can turn these meaningless negative intrusive thoughts into recurring thoughts (Winston and Seif, 2017). Support for the creation of unwanted recurring problem thoughts by giving them attention comes from Clark and Rhyno (2005), who stated that there is ample evidence of this happening.

The people that can often find negative thoughts hardest to handle and thus turn them into a problem for themselves are those who have the opposite personality. Therefore, a gentle person may cause violent intrusive thoughts to get stuck, because they’re the opposite of what they consider themselves to be, so it’s hard for them to believe they’d have such thoughts popping into their head (Winston and Seif, 2017).

Another example would be people in the caring profession who value human life, equally. They will more than likely have negative intrusive thoughts of abusing or harming a patient, which they can’t help but challenge rather than ignoring them.

Random intrusive thoughts about stuff like thoughts of the beach popping into your head for no reason, don’t become recurring thoughts because they’re emotional neutral. We don’t feel compelled to attack neutral thoughts, thus they can be easily ignored, often without even realising we’re having an intrusive thought (Winston and Seif, 2017). 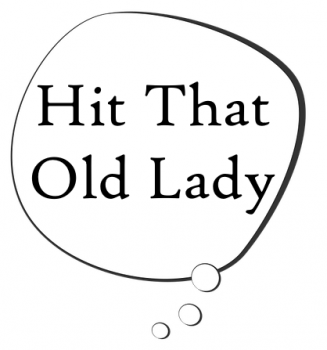 With all that said, even knowing all this doesn’t always stop the emotional distress caused by these intrusive thoughts, such as the ones that accompany a mental health condition (Clark, 2018). I learnt that the hard way with my anxiety-induced psychotic episodes.

One of the reasons people can be bothered about their negative intrusive thoughts is because they fear that it’s actually an impulse they have, which it isn’t. Impulsivity and impulse control disorders are something different, these don’t come with thinking (Winston and Seif, 2017). The fact that you’re only thinking about them is a sign they’re not an impulse issue. But if you get hooked on fighting these thoughts, you will develop an overcontrol issue.

These negative intrusive thoughts can also lead to obsessive-compulsive disorder (OCD), resulting in repetitive tasks being performed to remove or counter these distressing thoughts (Substance Abuse and Mental Health Services Administration, 2016). Basically, overcompensating by challenging these thoughts can cause conditions like OCD and anxiety. For me the latter became true.

Negative intrusive thoughts can basically cover any and all topics you could possibly think of. But sometimes you need to see an example to help you feel ok about having them. So here are a few to put you at ease.

These may all be abhorrent to you and would be something you wouldn’t act upon, but that doesn’t stop them from invading your mind as negative thoughts.

Again, just because you’re having these thoughts doesn’t mean you actually want to do them. It’s also common for women to have thoughts about harming their newborn, especially if they have postpartum depression.

I thought I’d also share with you some of my intrusive thoughts which I, unfortunately, turned into recurring thoughts.

For the longest time, I was troubled by thoughts about an attack I suffered when I was in high school. Whenever my mind wasn’t occupied, it would drag me back there and consume itself with thoughts about that event. It was so bad that it caused insomnia. Some times these thoughts would be violent, but more often than not they were just retraumatizing thoughts that I just couldn’t let go of.

I’m currently doing a placement to get the 100 clinical client hours I need to finish my postgraduate, and even though I need those hours, every day I have intrusive thoughts wishing my clients won’t attend.

Whenever I eat food, I always get thoughts about eating ground-up cockroaches in my food or finding some other sort of nasty and disgusting thing in my food. This was all kicked off by something I watched on TV as a child, where someone put maggots in someone’s food on Grange Hill. For a while, these thoughts made it difficult to eat, but now I’m used to them.

One time when I went to meet a friend who had recently broken up with their partner, I was greeted with intrusive thoughts of cheating on my partner. Thoughts like this had been a problem for me most of my life. I stopped going out drinking with my friends once I committed to my partner because these thoughts normally lead to action in my younger years. Before that, I avoided relationships so I could go out without these thoughts being a problem. Nothing like that should happen to me nowadays, because I no longer crave external validation of needing to be wanted. Nevertheless, it’s worrying these thoughts and images still pop into my head.

Lastly, my most troubling thoughts were the ones related to my anxieties, which occasionally fluctuate. Because I use to be a reckless drug taker, due to my BPD, I suffered a psychotic break. That one episode caused recurring intrusive thoughts that could then trigger further psychotic episodes. I couldn’t trust my sense of reality, and thus my thoughts told me that other people were aware of stuff about me that I wasn’t, and that they were laughing at me because I’d lost bladder or bowel control.

I never lost bladder or bowel control, but my thoughts would keep telling me I had, I was just unaware because my reality was messed up. These were massively debilitating and unwanted negative thoughts.

Not all disturbing intrusive thoughts are bad, some can actually serve a function. When I would have violent revenge thoughts against the people that ruining my childhood, it can be our mind’s way of trying to manage these painful events. According to Winston and Seif (2017), this escape into fantasy helps us to feel less helpless about the realities of what happened and what can’t be changed.

This may be the reason why I had these thoughts, but it didn’t fix the trauma of it all. I was deeply messed up by what happened to me. Maybe because I was already traumatised, the helpful effects of escaping into a revenge fantasy weren’t enough, like a bandaid on a broken leg. 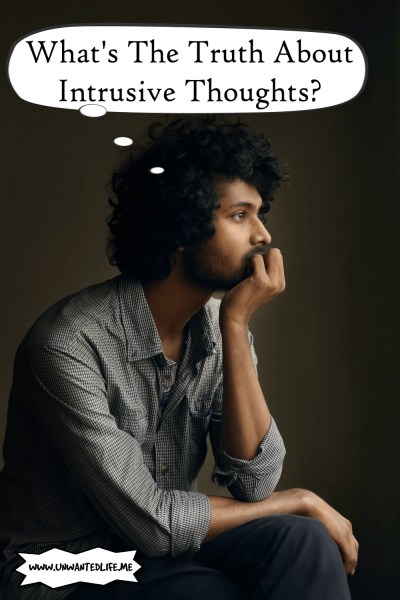 There is a very good reason for why we have intrusive thoughts, and that reason is that it’s important for human survival, as well as being essential to how the human brain works (Clark, 2018). A good example of the benefits of positive intrusive thoughts is when you suddenly come up with an answer to a problem you’ve been stuck on. Therefore, if you were in a life or death situation, such thoughts could be the difference between staying alive and dying.

Furthermore, the sudden hits of inspiration are also intrusive thoughts, so without them, our creative endeavours as a species would be very different. This is often why we can get our best hits of inspiration or problem solving when we’re not actively thinking about it, leaving our undirected thoughts to give us what we need.

In short, intrusive thoughts are both a curse and a blessing, but they only become a problem when the negative ones get out of control by us giving them attention.

What you need to remember when you have these unwanted intrusive thoughts is that they’re a fleeting thought that will disappear as quickly as it came, rather than believing it’s an impulse of something you actually desire to do (Winston and Seif, 2017).

Please remember that having such negative thoughts isn’t a commentary on your morality or even your sanity and that it’s perfectly normal (I hate using that word in such contexts, but I lack for a better one that fits the context) to have these thoughts, as we all have them.

Therefore, identify and recognise that your intrusive thoughts are, in fact, just that, intrusive, and thus unworthy of your time and energy if they’re not beneficial thoughts to have.

Changing how I responded to my own anxiety-based intrusive thoughts changed my life. The day I stopped fighting these thoughts, though hard, had the biggest impact on my quality of life. These thoughts are barely an issue to me anymore.

However, as irrelevant as they are, they may return, and that’s also ok too. Just because they return it doesn’t mean anything. I spent my entire childhood having thought about sticking my arm or leg out in front of an oncoming bus or lorry to see what would happen, but I never actually did it. It was just a recurring, intrusive thought.

Remember that these intrusive thoughts aren’t under your control, and are thus involuntary in nature, making them irrelevant to you if they’re not beneficial to you in any way. Much like with thinking errors, whereby you may confuse your feelings as being a fact, you also shouldn’t confuse unwanted thoughts as being your truth either.

If these don’t work, then you could try doing meditation, mindfulness, or any number of breathing and grounding exercise. This will allow you to distract yourself from the thoughts if ignoring them isn’t a strategy that works for you.

Lastly, it’s also important to remember that if you’re struggling with mental health issues, then chances are you’ll have more problems with dealing with intrusive thoughts. Thus, dealing with your mental health concerns will also help with these negative thoughts. There is nothing wrong with seeking help from a therapist or a doctor, nor is there anything wrong with taking medication prescribed to you to help improve your quality of life.

Substance Abuse and Mental Health Services Administration. (2016). Impact of the DSM-IV to DSM-5 Changes on the National Survey on Drug Use and Health [Internet]: DSM-IV to DSM-5 Obsessive-Compulsive Disorder Comparison. Retrieved from https://www.ncbi.nlm.nih.gov/books/NBK519704/table/ch3.t13.

65 thoughts on “What’s The Truth About Intrusive Thoughts?”