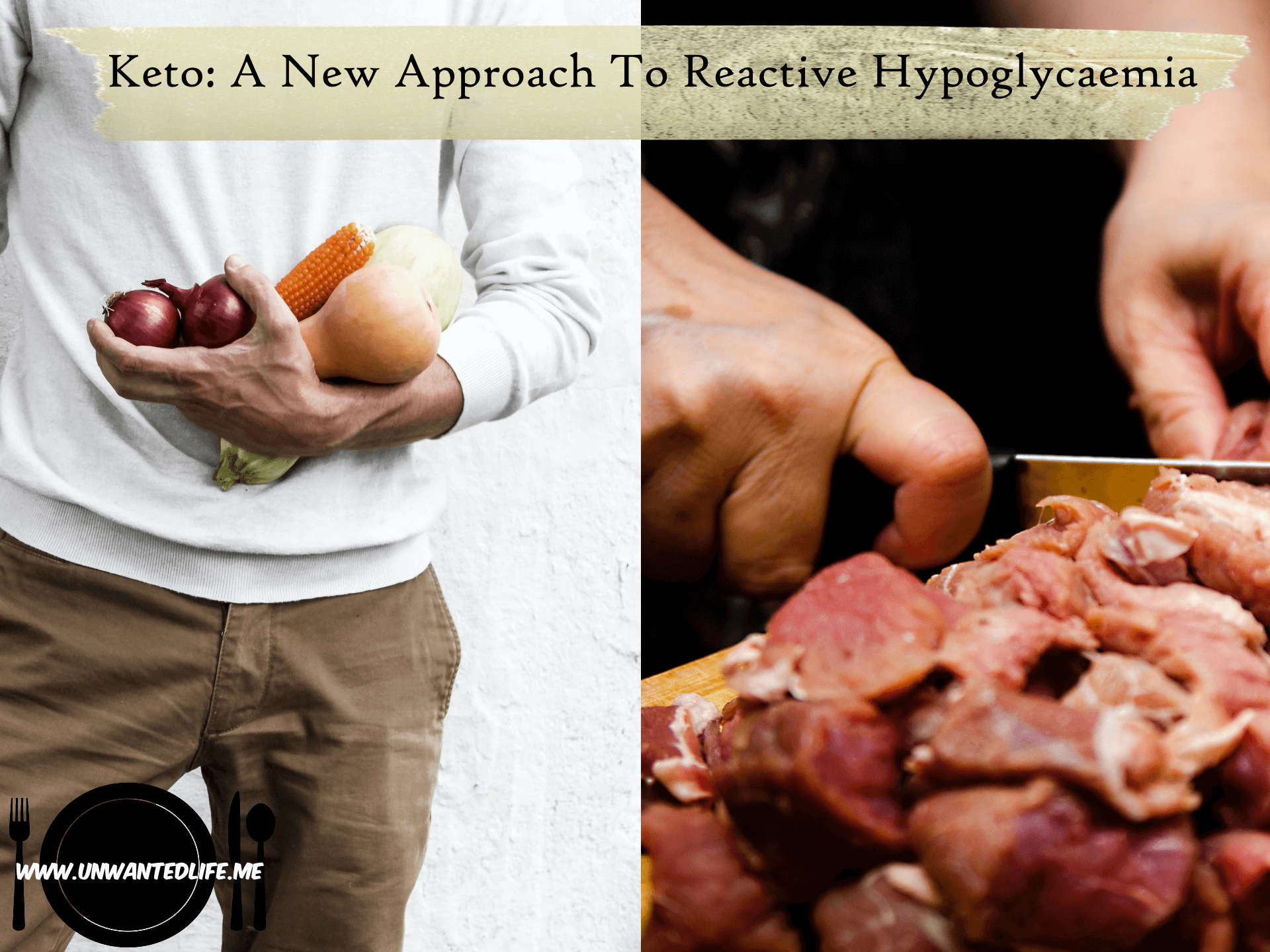 One of the annoying things about trying to get to the bottom of my health problems was the investigation into my reactive hypoglycaemia. That’s because I got a lot of conflicting advice I got. A nurse during my 5-hour glucose test told me one thing, two different endocrinologist specialists told me something else which led to me performing some health experiments on myself (Hypo Management: Meal Replacement And Protein Bars), and after my stress test (cardio-pulmonary exercise testing, CPET), this would change again, as I was advised to go keto.

For the CPET I had to show my lung’s ability by blowing as hard and as long as I could into a device, and then they fitted me with a breathing mask. I also had a tonne of ECG sensors placed on me (I wished I’d shaved my chest). I then had to ride for as long as I could on an exercise bike as they monitored and took readings with all the gizmos they’d attached to me. I had to ride until I hit the wall and then keep going until I couldn’t give anymore.

The problem was that the mask wasn’t tight enough, so the seal for the breathing mask wasn’t 100%, so the specialist consultant held it against my face. This really isn’t ideal as I couldn’t see what my pace was anymore, so I couldn’t judge how much effort I needed to apply (there was a minimum pace I had to keep). It’s also not great to have someone hold a mask tight to your face when you’re riding a bike as hard as you can.

During the test, they routinely took my blood pressure and at the end of the test they also did a glucose test (finger prick test). Three staff members had to carry me off the bike and put me on a nearby bed, as I was no longer able to move my muscles. I also felt incredibly nervous and was extremely worried that I would lose bladder and bowel control (The Weird Behaviour Of My Anxiety Disorders) like I normally do when I have total muscle weakness. But luckily that didn’t happen.

Once I was able to move and walk again, the specialist consultant and I had a long chat, where I was advised to go keto because it would help me lose weight and manage my reactive hypoglycaemia. Apparently, this is important because fat can release insulin, but I’ve not been able to find anything that backs up this claim made by this specialist, unfortunately.

In order to go keto, I would have to give up carbs, which is hard because everything tasty has carbs, and pretty much everything else has carbs in it as well. I had tried giving up carbohydrates the year before, but that just made me miserable (Dieting To Misery: Being Overweight), and I wasn’t looking forward to feeling like that again.

The basics of going keto are that I will be changing from a carb-burning metabolism to a fat-burning one. This means I can pretty much eat all the fat I like, but I have to avoid carbs, but not only that. I was surprised to find out that I also need to keep my protein levels low too. It turns out that the body will convert protein into glucose in the absence of carbs (NHS). This means that if I want to get into a ketosis state, I have to keep both my protein and my carbohydrates low.

Upon hearing that, I realised why all the times I’d cooked and eaten a plate of chicken wings, I’d had a really bad hypo in less than 3 hours. Every time this happened, at the time, I couldn’t figure out why this was happening when I wasn’t eating carbohydrates, and that’s because the other specialists never mentioned protein being a problem.

Because they hadn’t warned me about protein, and nor did the dietitian I saw either, I had switched from trying to eat carbohydrate snacks to protein snacks. So I’d brought a lot of different meats to try to eat (meat is really bland and boring without a carbohydrate sauce). But this choice I made based on the advice I was given, where I switched to eating more protein and fewer carbohydrates as an easy cooking switch, wasn’t improving my reactive hypoglycaemia at all. 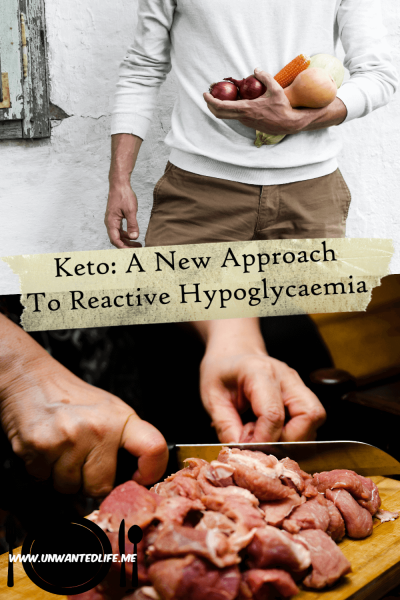 One of the benefits the specialist told me of going keto was that I wouldn’t have to eat every 3 hours and that I could eat more normally. Having hypos was always a trigger for me to eat before I started getting them. Without that prompt, I’d often just starve myself. So although I was happy to hear that I might now be able to avoid, or at least better manage, my hypos, I was also concerned that the lack of hypos would mean I would fall back into bad eating habits and starve myself.

It also didn’t help that all the specialists I saw along the way to my reactive hypoglycaemia diagnosis, all told me to try intermittent fasting (5 days normal, 2 days fasting). I was also advised to not eat after 20.00. I was right to be worried, since going keto, when I’m at home all day, there have been times when I haven’t eaten at all or only once a day.

An example of how bad an idea this was for me was the fact that on a number of days, I’d only eat a tiny Babybel and a mini Peperami. So instead of eating half a plate of vegetables with each meal, like I was told to do, I was now barely eating more than a handful of food a day.

There was one bright side: once I got my weight down, I would be able to introduce small amounts of carbs back into my diet a few months down the road. It’s been a few months, and I’ve clearly not lost enough weight to do that yet. Although going keto has totally gone out the window due to having to self-isolate because of the coronavirus and the lockdown that followed (Coronavirus, Self-Isolation, And The Selfishness Of Others).

The specialist consultant also wants me to get more sleep and that I should establish a better sleeping pattern. Which is easier said than done. For about a year, I had been sleeping with a more normal pattern, but since falling ill with a chest and throat infection, my sleeping pattern had been completely destroyed.

I was told to make sure I exposed myself to sunlight or a really bright light within 30 minutes of waking up. Which, being in the UK, and winter, there’s no chance of exposing myself to natural sunlight, even less so now that the UK is in coronavirus lockdown at last (Coronavirus, Self-Isolation, And The Selfishness Of Others).

To make up for the lack of carbohydrates in my cooking, I was told to put butter, olive oil, and salt on everything to enhance the flavours of my food. Which I haven’t really done yet. The only real change I’ve made is to pan-fry food with butter rather than cooking oil.

Another thing that was stated, which was surprising information, was that apparently, due to going low on carbohydrates, I’ll need to ingest more salt and water. But I can’t remember the reasoning behind it. I’m also meant to eat more organ meat when I eat meat, but again, I’m not sure why. I’m guessing the latter is a nutrient thing.

Exercise was also brought up because, obviously, that would help with my weight, but I also wanted to know if I would be able to exercise without losing total muscle control like I had been for years (The Weird Behaviour Of My Anxiety Disorders). The specialist stated it would most likely be a year before I could go to the gym again, and that I needed to work up to it. Recommending I start with long 30 minute walks.

Even though I’ve rarely ever eaten mayonnaise, I decided that I should switch to mayo as a sauce with my food, rather than having ketchup. That way, I’d reduce more carbs from my diet and add some more fat into it with one simple swap.

Because I’m terrible for having the motivation to make the effort to cook and clean, as well as using fresh food in time, I didn’t know what I was going to do to get my half a plate of vegetables into my diet.

I tried microwave-steamed vegetables after seeing a special offer for a microwave steamer product at the supermarket, but they just came out a bit soggy. Another downside was that I’d have to clean the microwave steamer and microwave after every use, due to the amount of moisture it produced. Which I’m just not going to do. Too much hassle.

My partner had the bright idea that I should buy antipasto/antipasti. No hassle vegetable alternatives of jars of vegetables in oil, giving them a long use-by date.

Although I still don’t really eat half a plate of vegetables. In fact, my overall portion size has become a lot smaller as I’m bored with my food choices. Which makes it easier to starve myself as I have no interest in eating, let alone cooking after going keto.

Going keto is a struggle, especially when you have reactive hypoglycaemia, but even more so when you have a history of issues with an eating disorder. So be safe with any diet or lifestyle changes you want to make.

As always, leave your feedback in the comments section below. Also, feel free to share your experiences with reactive hypoglycaemia, diets, and going keto in the comments section below as well. If you want to stay up-to-date with my blog, then sign up for my newsletter below. Alternatively, get push notifications for new articles by clicking the red bell icon in the bottom right corner.

32 thoughts on “Keto: A New Approach To Reactive Hypoglycaemia”