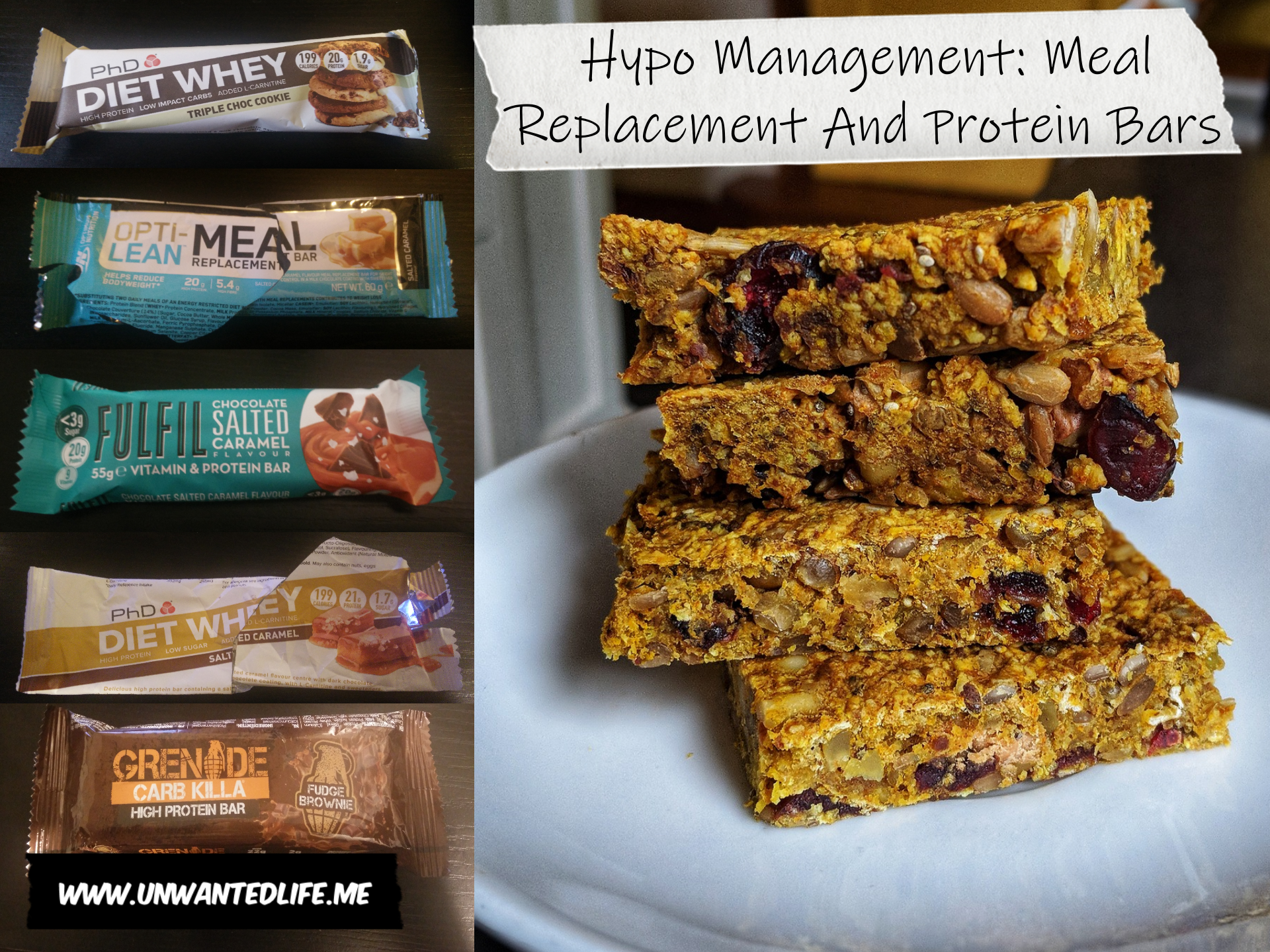 Due to my reactive hypoglycemia diagnosis, I was allowed to see a nutritionist. After seeing the nutritionist at my GP surgery, where they recommended I eat little and often, eating roughly 15-20 grams of carbs at each meal, I started thinking about eating protein bars to help me.

This is because I have issues with eating, I’m a picky eater, and suffer from persistent depression which causes me to have no motivation to cook, that I started thinking about ways I could make this easier. Thus, I decided to run another simple test on myself to see if I could.

The hypothesis I decided I would put to the test was if meal replacement and protein bars, with the right amount of carbs, could help me manage my hypos and reactive hypoglycemia.

Because I’d been told I need to eat little and often and that I should eat every three hours, I really needed to find something that would require minimal effort. Preparing food every three hours is way too much effort for me, given my sheer lack of motivation to look after myself. I also had to like what I’d be eating, which is hard to do as it is. Thus, meal replacement and protein bars could be quite useful for dealing with this situation.

So I wondered about meal replacement and protein bars, and much like last time when I did a series of tests on myself (Health Experiments: An Investigation Into My Poor Health), I reached out for information from a Facebook group I’m in for reactive hypoglycemia.

It turned out that a fair few people in the group have also done what I was thinking about trying. The only problem was, all the bars they recommended only seemed to be available in the US, like Solo gi.

The UK options I could find in the shops around my area weren’t quite as good as the ones that had been suggested. Meaning I had to settle for what could be an inferior meal replacement and protein bars.

After browsing a few options at the health food store, Holland & Barrett, I eventually picked five bars to try. These five bars were the basis of my second health experiment based on myself, covering three days.

The first one I ended up having was a protein bar by PhD Diet Whey (salted caramel) for breakfast, due to having a hypo. I didn’t have time to eat before my GP medication review and started spinning out as soon as I got on the bus.

So I picked up a few meal replacement and protein bars from Holland & Barrett after my GP appointment, and this one was the first one I tried. I started to feel a little better after eating. Although, these bars don’t work with the whole ‘rule of 15‘ concept. So the 30-minute mark is probably where I’ll notice the most changes if they’re going to start happening.

Felt rough for a while, but that could have been due to travelling on the bus whilst feeling hungry and having PPPD. After I got off the bus, I started to feel better than I was before I ate, but still not 100%. Not sure if the bar can be entirely to blame for that, given that I have PPPD, and I was travelling. Four more bars to go.

When it started to come up to the three-hour mark since I last ate (the first bar), I figured that would be a good time to try another of these bars.

After eating the bar, I didn’t seem to crash as hard as I normally would do. I would say it greatly reduced the blow of my usual hypos, rather than helping me to avoid it. I felt a little weird, but then I almost always do. The bar at least helped stop my hypo from affecting my ability to work on my dissertation, so I’m counting that as a success, I think.

Due to focusing on doing work on my dissertation, I completely lost track of time. But it seems it’s been longer than three hours since I ate the bar and I didn’t get any worse than I was. So it would seem the bar kept me fairly stable, even if it didn’t completely help me avoid a hypo.

Again, I forgot to buy something quick I could eat for breakfast before an early university appointment. Meaning I had to rely on another one of these bars as a way to hopefully tie me over until I could get something proper to eat after my meeting.

I ate this bar at around 08.30 in the morning, with my appointment at my university being at 11.30. Unfortunately, it didn’t last as long as I was hoping for. But again, this could be partly due to travelling on the train to my appointment, due to my PPPD.

Either way, it would appear this bar didn’t really meet the minimum requirement of managing my hypos for at least three hours. So I may avoid buying this particular bar in the future, should I decide to use these meal replacement and protein bars to manage my reactive hypoglycemia.

About two and a half hours after I ate the fourth bar, I still felt reasonably good, but I was really hungry. The bars don’t amount to much in the way of filling your stomach up, so I had to eat something a little more substantial to get rid of the hunger pangs.

It had been a fairly long time since I felt hungry when I wasn’t suffering from a hypo as well. It’s a weird state to be in. I’m so used to only eating when I start to feel terrible due to having a hypo.

My last and least favourite protein bar to eat was another one from PhD Diet Whey (triple choc cookie). Which, oddly enough, I also ended up having for breakfast, due to becoming symptomatic whilst I was catching up on social media not long after waking up

The bar didn’t really seem to help as much as I would have liked, or as much as most of the other bars had done. This is strange because the other PhD Diet Whey (salted caramel) bar worked a lot better when I ate that to manage a hypo.

It’s possible that I could have been affected by the placebo effect when I ate the first few bars, or it could be due to some unaccounted variable. Who knows? But I’ll avoid getting this exact bar again should I buy anymore.

The texture of the bars isn’t the greatest, but they all did appear to help manage my hypos, to different degrees. Using such bars could help me better handle my condition and get around my lack of motivation to keep preparing food due to my persistent depression and my issues with food.

However, by the time I ate the fourth bar, I’d already started to feel a little gassy and got a bit of diarrhoea. I didn’t have a waterfall falling out of my arse or anything. It was more melted chocolate (sorry for the imagery ha ha ha). But it’s also possible that part of my body’s digestive reaction to the bars could be down to me having IBS (My Experience Of The Gastrointestinal Appointment).

If I tried to eat two/three of these bars every day, then this could become a pretty big problem. Although this could also just be a coincidence. It’s only a mild case. I had worse when I tried eating no added sugar chocolate; man that was a surprisingly bad and unexpected experience.

One of the drawbacks of eating these bars is the cost. A single bar was £2.49. If I buy in bulk, I might be able to bring down the cost of the bar to £1.84 each, if I buy in packs of 12. But if I need to eat two-three of these bars every day, then the price is going to add up quickly. 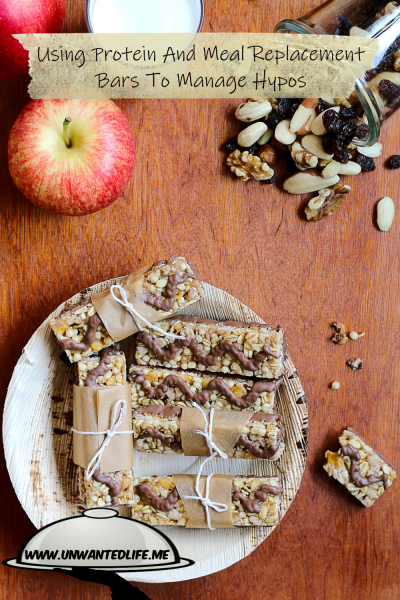 Just how do people with this condition manage to eat so they don’t even get any symptoms? I crash at around three hours, which means I need to eat 15-30 minutes before then to avoid symptoms. Meaning, I would have to eat every two and a half hours to avoid being symptomatic. How’s that possible? How would I be able to afford that if I did that by eating meal replacement and protein bars?

Also, what are polyols meant to be? It’s a nutritional item found listed in the sugar section on the packs of these bars. It’s not something I’d ever come across before, so I know nothing about it.

As such, what are the issues with eating this kind of sweetener? Will they cause diarrhoea like a lot of other sweeteners? Or are they closer to regular sugar, fast-acting, rather than longer-lasting carbs that I need? These were the questions I asked myself after finding out about polyols, I guess I’ll have to do a lot of reading in order to answer these if I do decide to continue using the bars to help with my hypo management.

To generate better results, I should have done this test when I wouldn’t be travelling. My PPPD could be a factor in me feeling like I was crashing, due to catching buses when I ate the first bar, and for the third and fourth bars when I was using the train.

Whilst online food shopping (due to being too ill to go into town to shop), I found that all the protein bars and meal replacement bars that contain polyols are listed as having a laxative effect at ASDA. So I guess that puts an end to that idea then. I can’t really eat two-three bars daily if they have a laxative effect.

As always, leave your feedback in the comments section below. Also, feel free to share your experiences of hypos, PPPD, and running health experiments on yourself, or know anything about polyols, in the comments section below as well. If you want to stay up-to-date with my blog, then sign up for my newsletter below. Alternatively, get push notifications for new articles by clicking the red bell icon in the bottom right corner.