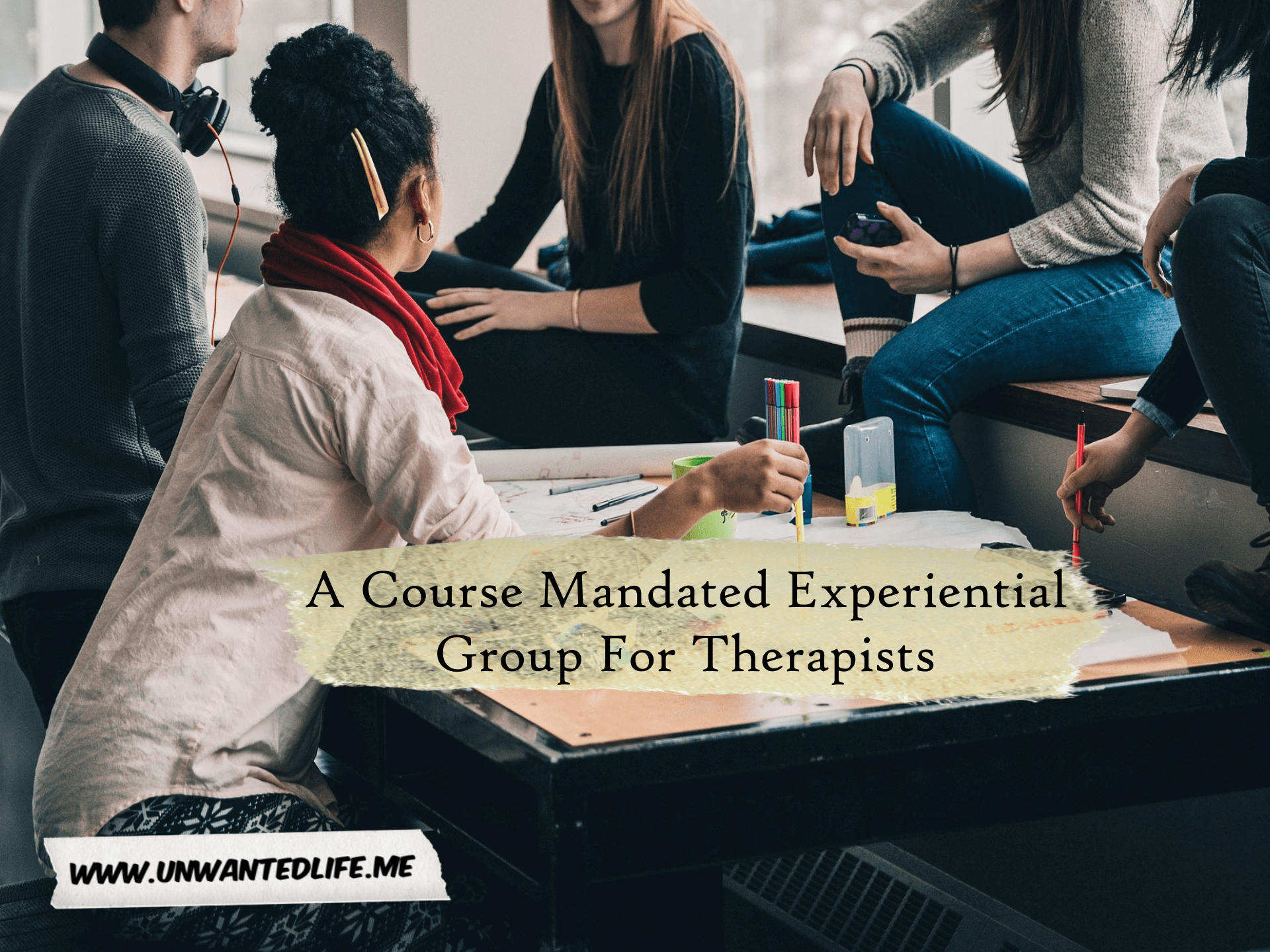 A feature of training to be a counsellor is to often make those in training undergo taking part in an experiential group. This was one of those occasions. As part of my postgraduate degree, I had to partake in a course mandated experiential group. Which, I didn’t enjoy doing because I’m not a fan of being a participant in groups as it is, but this would bring up a new set of reasons as to why I don’t like doing them.

What Is An Experiential Group?

Experimental groups are designed for counsellors and therapists to learn thought to act of experience from the perspective of a participant, rather than as a counsellor or therapist. Not only do you experience what it’s like to be a participant in a therapist style group, but you also meant to reflect on the experience so you can further learn from the process.

My Experience Of An Experiential Group: A Cautionary Tale

The experiential groups we were made to do as part of the course weren’t something I enjoyed. It’s not really in keeping with my personality, and I’d rather use my time more constructively. But this particular format did offer some interesting, if alarming, insight into the human condition.

It’s important to note that everyone in this course is being trained to be an addiction counsellor, with a lot of them going through addiction treatment themselves.

We learnt the hard way the importance of good facilitators and how effective minority influence can be. During one of the experiential groups, a classmate decided to confront another classmate about a problem they had with them. One of the facilitators then asked to have it brought to the group properly, giving this behaviour the seal of approval.

This resulted in 4-5 other people all deciding to air their criticism of the same person. With each person joining, you could see it diffusing the responsibility they should have been taking for their comments and actions.

The target of all these comments ended up crying, but this didn’t stop them from continuing to criticise that person. I was shocked that my classmates had disregarded everything they’d learnt on the course, from their professional work, and from the treatment they’d attended themselves.

To my shame, I didn’t say anything because I didn’t want to engage with the group at all right from the first session. I’d only say anything if asked something directly.

The facilitators didn’t put a stop to it either; a fellow classmate had to. The target of all the criticism was so distraught, they didn’t want to come to the following lecture and didn’t stay for the next experiential group either: they eventually dropped out of the course. 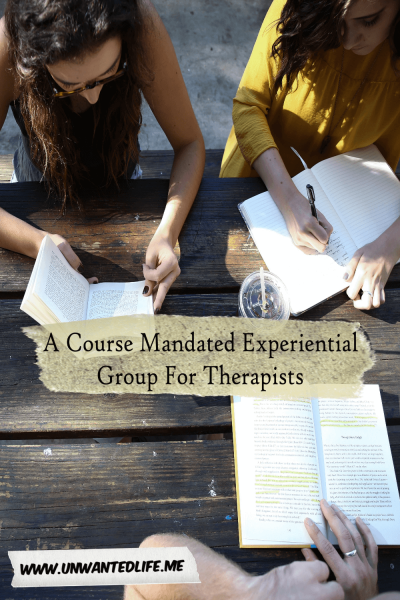 Although this was an artificial setting, when compared to proper therapy groups, one thing should always remain the same: the role of the facilitator. The facilitator is there to protect the group members from such things happening. If you can’t trust the facilitator, then participants won’t want to make themselves vulnerable by sharing. Basically, the experiential groups don’t feel like a safe space anymore.

When I worked for an addiction charity, I was trained on how to properly handle groups and to resolve problems with clients or staff, one-to-one, to avoid embarrassing and shaming them publicly. It’s also common practice to wrap the criticism in compliments to lessen the negative effects: The Sandwich Method (although some of you might know it by another name ha ha ha). Something both the facilitators and my fellow classmates would have all been familiar with.

However, the sandwich method wasn’t used by any of the people piling on the criticism.

It was a shame that something I’d already learnt about, the effects of minority influence, which I hadn’t seen being used in a negative way in practice or real life, was experienced on such a course: in a group, I was participating in no less.

During a later group, I was pushed to answer why I was didn’t want to participate in these sessions: so I explained why.

The problem with this group (although it’s not confined to just this group) is that people keep feeling like they’re being attacked, and respond as such. Even when criticism is presented through the sandwich method.

People seem to believe that using the magic phrases; “I think…” and “I feel…” will somehow make what they’re saying feel like it’s not an attack, but it doesn’t work out that way.

I had to watch on and listen to people getting angry with each other on numerous occasions, using their boxing match of “I think…” and “I feel…”.

Two members of the experiential group always reacted and respond badly to; “I think…” and “I feel…” comments made towards them. You could see the anger in their silence and the shift of body language as if you were being hit in the face with a brick.

I’m just not interested in joining in with the drama the group brought. Even though I’ve pointed out to the group that this is a common problem our group kept having, nothing changed. I even suggested that they should at least use the sandwich method if they want a chance of people feeling like they’re not being attacked with the “I feel…” and “I think…” comments, but only one of the group members ever used that method.

Ironically, that person used that method on me to comment on my lack of interest in joining in with the group. That’s how I ended up layout out my above reasons for not being interested in joining in on the drama.

Another example of the drama was how one of the group members often closed their eyes during our groups, which doesn’t bother me at all. However, it was brought up by another group member with an “I feel…” comment. This soon descended into a back and forth that drew other people in, as some people felt attacked and others came to their rescue.

People seem to think the “I think…” and “I feel…” comments allow you to say whatever you want and other people won’t feel hurt by it, which isn’t the case: something I’ve pointed out numerous times. This ended with the group member who kept closing their eyes during the group leaving the session.

In some cases, such comments are little more than thinly veiled attacks on one another. I wish I could say these exchanges were a one-off, but this process played out a lot in this group. Being made to sit through this drama queen stuff, session after session, just made me resent having to be there even more.

Every experiential group I had to attend just made me resent the course more than I already did. I felt the course wasn’t teaching us anything that we wouldn’t have been taught by any addiction role we’d take: I know I’d already been taught this at the addiction charity I’d worked at. Essentially, they were just giving us keyworker training with psychology theory added on.

To make matters worse, our monthly morning placement group just became the appetiser to the actual experiential group. Often, the problems would just carry on where it left off in the other group. Meaning the drama would often spill out into both groups, as well as outside the group causing a divide between us as people started to really dislike each other.

I just couldn’t handle this triple whammy without risking quitting the course, so I took the day off. I even told the course director the exact reason I just stated here for taking the day off.

What I learnt from the experiential group wasn’t what was intended to be taught to us, but it was an eye-opening educational experience, one I hope not to have to experience again.

It can be really easy for people to feel attacked, even those training to be therapists and counsellors because they’re still human. Even using the phrases we often see on TV shows and in films of people in therapy, the “I feel…” comments don’t always stop people feeling attacked and these becoming defensive. There’s nothing wrong with being honest. It’s how you deliver that honesty that matters.

As always, leave your feedback in the comments section below. Also, feel free to share your experiences with groups and counsellor/therapy training in the comments section below as well. If you want to stay up-to-date with my blog, then sign up for my newsletter below. Alternatively, get push notifications for new articles by clicking the red bell icon in the bottom right corner.

14 thoughts on “A Course Mandated Experiential Group For Therapists”