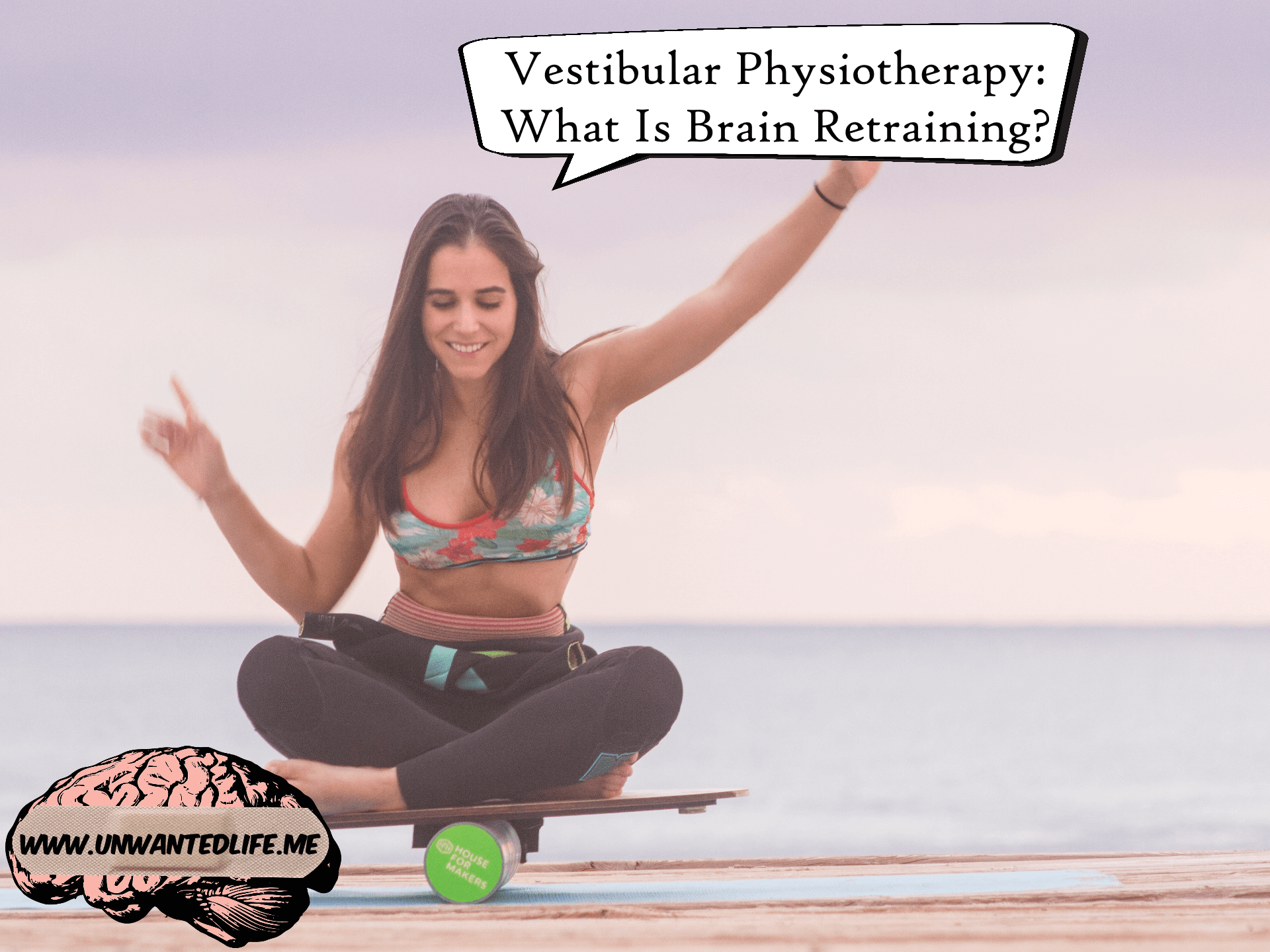 In the summer I went to the balance clinic, where I got diagnosed with persistent postural perceptual dizziness (PPPD) and was then referred to vestibular physiotherapy, eventually (it took months of chasing to get this sorted). After having to cancel my first vestibular physiotherapy session, due to being really unwell (which ended up taking me three months to recover from), I finally got to do my first session.

But before I talk about that, let me quickly tell you what vestibular physiotherapy is and why it’s used.

What Is Vestibular Physiotherapy?

The aim is for your brain to be retrained so that it adapts to the weaker or altered signals from the balance organ that is throwing the whole vestibular balance system out of whack. This is known as vestibular compensation. Which I read a lot about as part of the exercises I had to do during my sessions (I’ll explain this later).

However, this brain retraining can take weeks, if not months, for your brain to learn how to compensate for the new way of doing things. And, as they told me, because I’ve had PPPD for so long, I may never fully recover.

I was told by the physiotherapist that there would be six vestibular physiotherapy sessions followed by a review. I ended up doing a session every fortnight rather than every week due to the availability because I didn’t want to have to deal with rush-hour trains. That’s because even super moderate exercise can cause me to feel dizzy and off-balance for hours at a time, and feeling unwell whilst riding a packed train isn’t fun.

After filling in some questionnaires, I had to start the session with some warm-up exercises. I had to follow along to a video, fairly basic stuff. I’m guessing they treat more people who are from the older generation.

The first set of exercises to help with my PPPD was to stand with my legs and my eyes closed, then turning my head from side-to-side for a minute. Then the same again, but this time moving my head up and down for one minute.

This was followed by doing the legs and eyes closed thing on a tiny trampoline instead, and again, for one minute apiece. But without turning my head side-to-side or moving my head up and down. This was far harder to do than the previous exercise set. 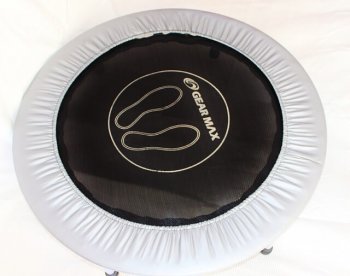 After the fun on the baby trampoline, we moved on to a treadmill exercise. For this, I just had to walk at a walking pace and read two sheets of text (this was where I read a lot about vestibular compensation) that were between a dozen posters of weird patterns. The sheets that I had to read were both off centre, which made me walk at a slight angle. I guess it was another factor in affecting your balance.

I had to read those two sheets of paper whilst I walked for two minutes on the treadmill. Then again, turning my head from side-to-side and then moving my head up and down as I read the sheets over and over again for 2 minutes. It was a weird experience because you’re focusing on something that’s off centre whilst your head moves, but the main issue is that this makes you feel like you’re going to trip over your own feet at any minute.

Lastly, I had to go into the ‘disco’ room. This was where they had an old school light projecting revolving ball, that rotated and projected different coloured lights. I had to look into the corner with this ball doing its thing in the dark for a minute. Then I had to do it again whilst marching on the spot for an additional minute.

That was my first session.

I’d also agreed to do an interview for a research project on my PPPD, which was being conducted at the hospital. However, there wasn’t an interviewer available to perform the interview, so they asked to call to conduct it instead. Sigh. I hate talking on the phone, but I agreed on a time for them to call me and I did answer the phone and take part in the research. On the plus side, I should get a copy of the research project when it’s complete, so that could be cool.

It took me some 4-5 hours to recover from the dizziness and balance problems this session caused. I felt really rough for a long time and it was a real struggle to do anything until I recovered.

I was given a simple set of exercises to do at home, which was the first set of exercises from my first session. I decided the best way to make sure I always did them was to do that whilst I brushed my teeth. I use an electric toothbrush, so it made it even easier to keep track of, and it became an easy behaviour to add into my daily routine, because of me doing it when I brushed my teeth.

On my way to the second session, I saw a long line of people get off a train, which annoyingly triggered a dizzy response. A pretty bad one and the subsequent vestibular physiotherapy session only made that worse.

In this session, after the warm-up, we skipped the first set of exercises from the first session and went straight to the trampoline. This time, however, I had to also throw in some head movements. I had to move my head from side-to-side, then up and down, with my feet together and my eyes closed. It was extremely hard to balance on the trampoline with my eyes closed, my feet together, and my head moving. I was all over the place, and could barely move my head like I was supposed to, due to how bad my balance was.

The rest of the session was the same as the previous session.

I hadn’t noticed any improvements yet, but it was only my second session, and I’d only been doing the homework for two weeks by this point. Again, upon leaving this session I felt rough for several hours. 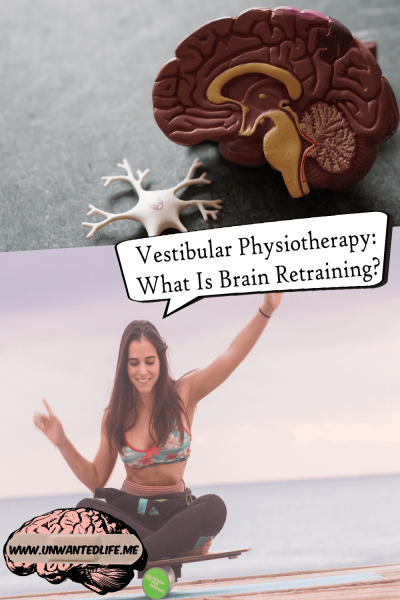 This was basically the same as the second session, except this time they added in a short exercise bike session. This just involved doing a really, really, gentle bike ride for three minutes. This might not seem like much, but moderate exercise can often trigger an episode where I get complete muscle weakness (which includes my bowels and bladder) which can last 40 minutes.

So I was a little worried, and it did make me feel rough, but luckily it didn’t trigger one of those dreaded muscle weakness episodes. However, my stomach started to feel upset after the bike, and my stomach remained upset for several hours.

There was also another change. The disco ball was updated and replaced with a projector so I could watch a video where I looked out of a train window, first still, then walking on the spot. Both for a minute each, in order to trigger my PPPD symptoms.

I still haven’t noticed any improvements. If anything, I seemed to be getting worse. I was starting to find the homework exercises had become harder to do: my balance felt worse whilst I did them.

Because this session left my stomach feeling upset, which lasted some 30-60 minutes after the session, I ended up buying doughnuts like a dumbass on my way back home. To give myself something nice. Which undid all my hard work of going keto to manage my reactive hypoglycaemia. I really need to find a better way to reward myself.

This session was the same as the previous one. I was asked to do the cooldown session this time, but I don’t do the cooldown stuff at the end as it features a lot of grounding techniques, which can cause me to have a psychotic episode (Mindfulness And Its Downsides: My Anxiety Disorders Vs Mindfulness).

Unusually, I felt worse before the session than I did after doing the exercises and stuff in the session. I normally hit by my PPPD symptoms by the time I get to my vestibular physiotherapy session: it’s the travelling to get there that messes me up.

The Fifth, And Final, Session

Due to the coronavirus, my vestibular physiotherapy treatments were ended a session early. The place was empty when I came in for my session, it was a weird experience. Normally there are always at least 2-3 other people there when I am.

Another thing that was unsettling was the fact that the first three hand sanitiser dispensers I tried to use when I got to the hospital were empty. This made my hands feel even more disgusting after touching these dispensers and not getting anything to clean my hands from them. Gross!

This was made worse, when I found out the following day that a person in my building (house of multiple occupancy) was told to self-isolate two days before when they fell ill (Coronavirus, Self-Isolation, And The Selfishness Of Others), but hadn’t bothered to follow any of the basic hygiene and self-isolating protocols. What a selfish person. I could have unintentionally spread it to that hospital because of that one person’s selfishness.

Anyway, my treatment was ending on session five instead of six. Instead, I was given home exercises to do for the next six months, and we went through those exercises in this session, trying to adapt them to my home situation (space issues).

My new daily homework for the next 6 months was to:

Unlike the other homework, which I could do as I brushed my teeth, these new ones mean actually making time in my day to do them without doing something else at the same time. Which will make it hard for me to get motivated to do these new exercises daily.

This also means that it’ll take far longer before another treatment type is tried, such as medication to help manage the dizziness. Because I was being discharged from their treatment, and I’ll have to get myself referred again to the balance clinic. Which could take months, and there are already six months to wait already. It’s taking so long to get my dizziness under control.

Anyway, I guess I’ll do a follow-up post to this one in about six-ish months, in case you’re interested in what happened next. Just a heads up though, I’ve already failed to do any of the new exercises I’ve been given, I just don’t have space, and I’ve been forced to self-isolate, so I’m unable to manage my hypos (What Is Reactive Hypoglycemia? Advice And Information).

I’ve also been stressed and depressed with trying to figure out what’s going on with my dissertation and my placement, which I now can’t complete due to coronavirus. I know these are all just excuses for my normally chronic lack of motivation, but hey, if it works.

As always, leave your feedback in the comments section below. Also, feel free to share your experiences with a dizziness disorder or vestibular physiotherapy in the comments section below as well. If you want to stay up-to-date with my blog, then sign up for my newsletter below. Alternatively, get push notifications for new articles by clicking the red bell icon in the bottom right corner.

28 thoughts on “Vestibular Physiotherapy: What Is Brain Retraining?”