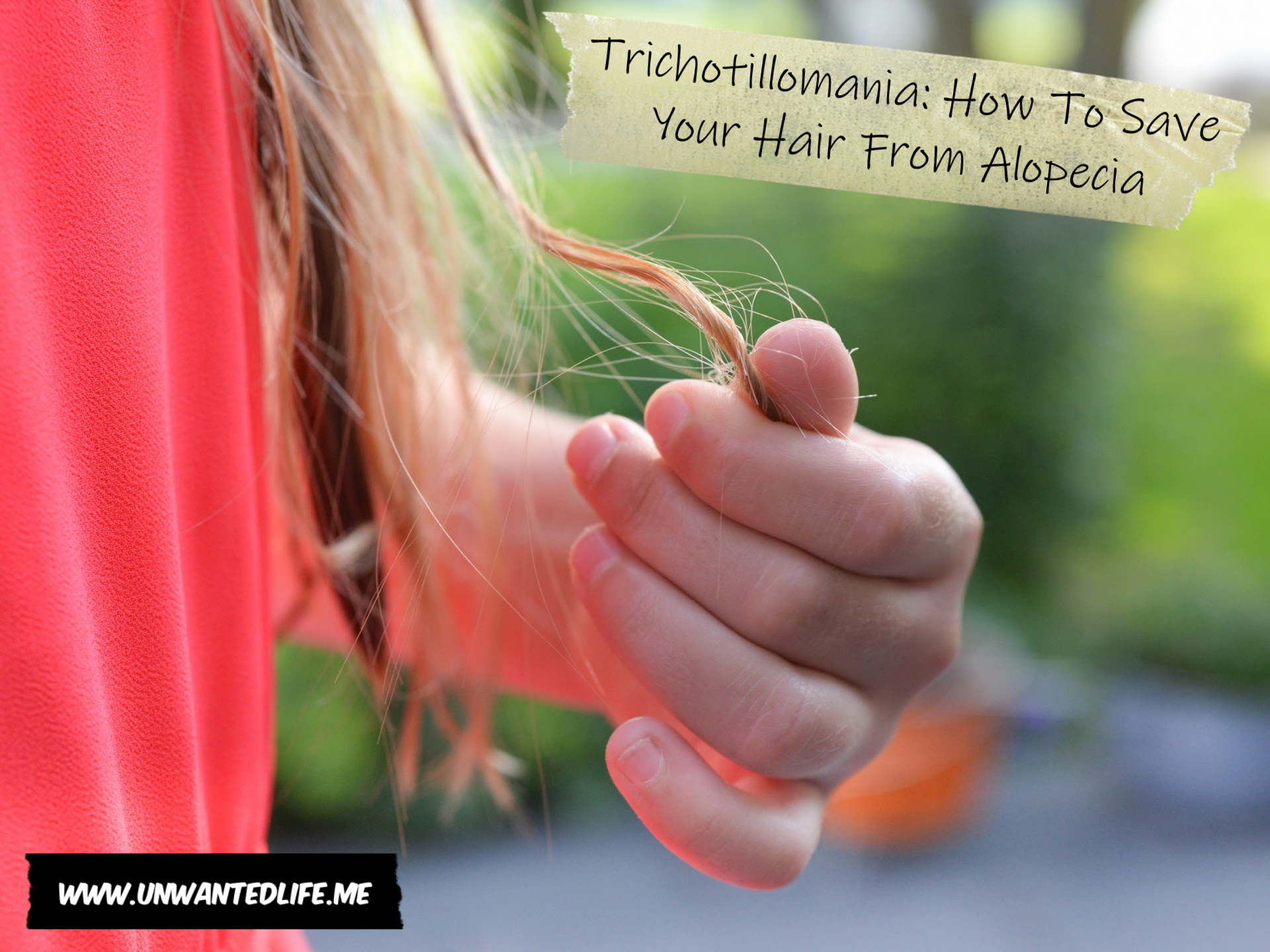 This is a topic very close to my heart, because I paid the ultimate price for having this a form of trichotillomania and not doing anything about it. I’ve talked about this condition a few times, because it’s my cautionary tale. No one wants to lose their hair, but when it’s your own behaviours that cause it, it’s even more devastating.

Trichotillomania (trik-o-til-o-MAY-nee-uh, in case you wanted to know how to say it) or hair-pulling disorder, is a condition where someone has a recurrent, irresistible urges to pull out hair from their scalp, eyebrows/eyelashes, or other areas of their body (OCD UK).

In 2013, the Diagnostic and Statistical Manual of Mental Disorders, Fifth Edition (or the DSM-5), trichotillomania was included into the chapter on obsessive-compulsive and related disorders (Grant and Chamberlain, 2016). This put it alongside obsessive-compulsive disorder (OCD), excoriation disorder, body dysmorphic disorder, and hoarding disorder.

Trichotillomania comes in two flavours, according to Mayo Clinic and Sah, Koo, and Price (2008). These two flavours are:

Let’s get the obvious sign out of the way first; you’re pulling out your hair. The less obvious symptoms that might help you identify trichotillomania, because not everyone realises they’re doing it, are:

This might come as a surprise, but the scientific world isn’t entirely sure what causes trichotillomania (NHS). Some suggest that it could be caused by the following, could, being the operative word:

It can also be a type of addiction. The more someone pulls out their hair, the more inclined they are to keep doing it (NHS). Or, as I experienced first-hand, it becomes an addiction, in that a behaviour done often enough becomes automated. For example, stress might not have always caused you to pull your hair out, but one day you started and it provided some sort of relief. Done long enough, a behaviour pattern will be created and your mind will activate it whenever you’re feeling stressed or in need of relief.

I would pull my hair out of my scalp because I felt inferior as a mixed ethnic person (Black and White) with dreadlocks. Black people always seem to have beautiful dreads, whereas mine were closer to that of a White person’s dreads with a lot of fuzz. I couldn’t stand this fuzz. When my attention was brought to it I’d try to flatten it, but often pulled hairs out to get rid of it. It’s a whole thing about my identity and racist abuse growing up.

The flattening of my hair then became an automatic behaviour, which caused me to hurt my hands and my head as I repeatedly hit it like a set of bongos. But I guess that wasn’t strictly hair pulling. I would also constantly twirl my dreads around my fingers until they’d bleed, pulled any strands that stood out of my dreads, and tightened my dreads obsessively. My head hitting and dread twirling very much became an addiction. I’d do it whenever I was alone and not doing anything with my hands. All because of racism.

If you’d like to read more about my hair pulling habits, then check out the following articles:

Life With My Hair Destroying Behaviours 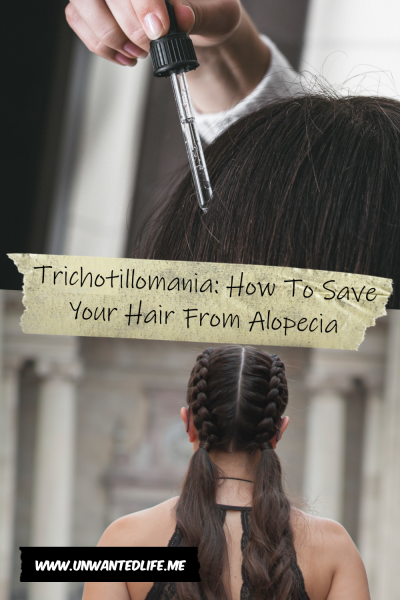 Tips from those with trichotillomania

The following are tips for dealing with trichotillomania by those who experience trichotillomania, gathered by the NHS and The TLC Foundation for Body-Focused Repetitive Behaviors:

A story told in HelloGiggles found that someone who braided their hair accidentally found it helped with their trichotillomania. Therefore, this could be an easy solution to managing your hair pulling.

This is what I did. I made an effort to bring my hair destryoing behaviours out of my unconscious and into my conscious mind. This allowed me to work out the patterns in my behaviours and develop a plan to tackle them.

Cognitive Behavioural Therapy (CBT) is the most common type of therapy for trichotillomania, which will use a method called habit reversal training (OCD UK). This method allows someone to recognise and become aware of their hair pulling, what triggers the behaviour, and then try to help a person replace these behaviours with something less harmful (a form of harm reduction).

This was something I did on myself. The first thing I did was force my hair destroying behaviours into my consciousness. But, I didn’t try to go cold turkey with my hair pulling behaviours, because that would have set me up to fail. Instead, as I’ve already said, I implemented a reduction plan which eventually got me to stop destroying my hair. Or rather, what’s left of it.

According to Healthline, vitamin A has been shown to increase the rate of hair growth. It might also help with sebum production, which will keep the scalp healthier and able to retain more hairs. You can increase your vitamin A by eating foods rich in it, such as sweet potatoes, spinach, and sweet peppers.

However, the American Academy of Dermatology Association warns against taking a vitamin A supplement to regrow your hair. It might seem like an easy solution, but taking too much of certain nutrients can worsen hair loss.

In the same HelloGiggles post, they also talked about products that could keep your hair flat. They talked about a product called Schwarzkopf Got2b Glued, a freeze spray. It was the little hairs that weren’t neatly in my dreads that I pulled out. If only I had known about such products, I might still have my dreads.

If your trichotillomania has started to cause your hair to stop growing in places, like it did for me, then hair loss medication could be worth trying. My GP prescribed this when I finally sort support for my hair loss after overcoming my hair destroying behaviours. However, no treatment is 100% effective, and this didn’t work for me. But then, I’d left it far too long to do something about it.

Finasteride and minoxidil are the primary treatments for male pattern baldness, but also as a treatment for trichotillomania and certain types of alopecia. However, they don’t work for everyone, they only work for as long as you use them, and as a result, it can be expensive (NHS).

As I said, my GP wanted me to try a product containing one of these ingredients before they made a referral. But, it didn’t work for me so my GP made a referral to the dermatologist.

When dealing with hair loss, it’s useful to speak to a professional and licensed dermatologist (American Academy of Dermatology Association). I was eventually referred to one by my GP, but they said it was too late, which I kind of already knew. So my advice would be to see a dermatologist sooner rather than later. The sooner you do something about it, the better chance you have of your hair recovering.

To help hide your hair loss and to help you stop pulling your hair out, you could try wearing a wig. However, I’m very aware that there’s a lot of stigma about wearing wigs if you’re a man.

I used to wear a tubular neckwear that you can turn into a long hairband made by a company called Buff. I used that to hide the fluff around my dreads and my roots. It actually helped. Nowadays I wear a durag to hide my patchy hair, because I’m incapable of shaving my head neat enough, because of my BDD. It can become quite the bloodbath.

Getting tattoos to have permanent eyebrows has become fairly fashionable for women. But you can also get tattoos that look like you’ve got a close shave. You may also know this as scalp micropigmentation. I’ve considered this myself, because that would be an easy way to fill in the patches. The problem is, I’d still need to shave my head.

This is also something I’ve considered. A hair transplant would take hair from the back of the head and place it in the areas that are thinning or where your bold patches are. However, this can be expensive. Plus, if you’re a man, you may expense male pattern boldness later in life. Therefore, it might not make sense to pay for this procedure to fix the hair loss caused by trichotillomania.

This is another hair restoring option, which uses surgery to implant artificial hairs. The downside to this is that your hair won’t grow, so you’ll be stuck with a specific style, unless you want to go shorter.

It’s weird to think that there’s no distinct cause for trichotillomania at present. That might change, of course, but for now it’s still quite an unknown. One thing is certain, trichotillomania, alopecia, and hair loss can be very stressful to experience. I know I still feel shame about the permanent hair loss of my trichotillomania. But don’t let this shame and embarrassment stop you from seeking options that might save your hair before it’s too late. I waited too long, and now the shame is everlasting.

There are many options you can try before you have to take more drastic measures, some so simple that you can do them today. So why not put them into action now, see how it works out, and while you wait, sort out what professional options you could follow up with.

As always, leave your feedback in the comments section below. Also, please share your experiences with trichotillomania and hair loss in the comments section below as well. Don’t forget, if you want to stay up-to-date with my blog, then sign up for my newsletter below. Alternatively, get push notifications for new articles by clicking the red bell icon in the bottom right corner.

28 thoughts on “Trichotillomania: How To Save Your Hair From Alopecia”