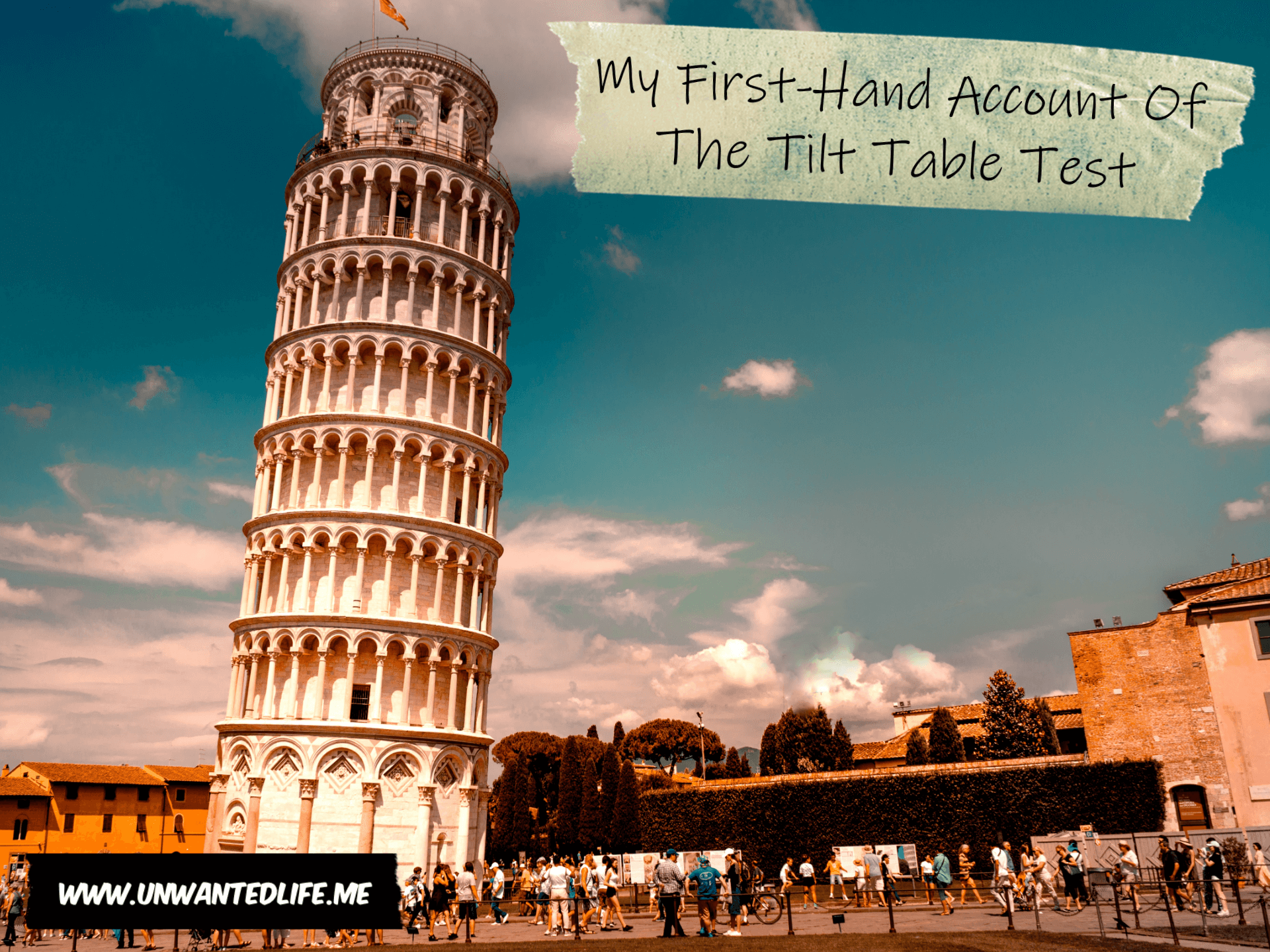 Over the next few months, I have a number of appointments for tests I’ve been referred to. Thus, I thought I’d write about my tilt table test experience. I’ll also write about my other tests as they come around.

What Is A Tilt Table Test?

If someone has symptoms of dizziness, lightheadedness, and/or loss of consciousness (fainting) that is suspected to be caused by a drop in blood pressure or PoTS, then they’ll get the tilt table test. The tilt table test is designed to trigger a syncope episode by causing a temporary drop in the amount of blood that flows to the brain.

For more information on a tilt table test, click here to be taken to the British Heart Foundation’s page on it.

I couldn’t eat for four hours before the tilt table test and I also couldn’t have a drink for an hour before the test. This caused me to be a bit lazy in getting ready to catch the train to the hospital. It’s very easy for me to start to procrastinate when getting ready to go anywhere because it’s easier for me to leave my place if I’m starting to be late.

I’d also chosen to skip taking my medication until after the tilt table test. I did this so I could have more time to sleep. If I don’t have to worry about cooking and eating breakfast before I leave, then theirs no point getting up earlier than needed. Because of this lie in, I couldn’t really take my medication due to the nil by mouth timeframe. However, at least this should give more accurate data from the tests, hopefully.

Due to my laziness of getting up, I left myself little time to get to the train station. This meant I had to do my speedier walk to make it there on time. If I’d missed this train I’d miss my appointment. Halfway to the train station my eyes suddenly begin to feel weird, I struggled to focus as well as I normally could, I started to feel nauseous, and my sense of balance started to make it hard for me to walk in a straight line: A common experience whenever I have to go anywhere.

This isn’t even as bad as it sometimes gets, but it’s still not pleasant. But I still had the journey ahead of me and an hour and 45-minute tilt table test before I could go eat.

I made it to the train by the slimmest of margins, still feeling really rough. These symptoms are usually made worse when travelling, and today would be no exception. Luckily, it didn’t make it as bad as it some times does. Some times it’s the equivalent of being in a small boat during a tropical storm: I can barely keep myself together.

I was so worried I’d have to stand on the train because the train departure time was so close to rush hour. I don’t think I could have handled that with the way I felt. I felt fairly weak, nauseous, and my sense of balance was quite compromised, which makes travelling on transport so much worse, more so when I have to stand. However, I was able to find a seat, so it wasn’t as bad as it could have been.

The only thing I could think about on the train was how I was going to have American pancakes with bacon for breakfast after the test. Something I ate last time I had to come to this hospital for a previous test that required me skipping breakfast.

One of the symptoms I’m being diagnostically investigated for is how my thinking can become foggy, thus reducing my cognitive ability. So having my partner at my appointments means theirs less chance of important information not being shared with the various medical professionals we have to deal with. It’s also really beneficial for my anxiety disorders to have my partner with me at my appointments as well.

Before and during the tilt table test, I was scared I was going to lose bowel and bladder control if my muscles went weak due to my blood pressure dropping too much or too fast. Whenever I’ve tried to go to the gym since these problems started, within the first few minutes of doing a warm-up routine my muscles would go weak. When this happens I become unable to move for up to 40 minutes before it passes. It’d be a mission just to avoid blacking out when this happens, with only a few minutes warning that this was about to occur each time.

During the test, I had sensations that would normally be a tail-tail sign my body is trying to trick me into thinking I need to go to the bathroom. But I managed to tune it out the best I could because I was strapped to a table in the middle of a test.

You read that right, for the test I was strapped down to a table. But it wasn’t a normal table, of course, it was one that could be raised to a standing position of approximately 75º from lying flat. I also had a blood pressure monitor on my arm and my finger, as well as being attached to an ECG.

One of the more annoying things about the test was the dry mouth and lips. I hadn’t had a drink of anything since before I went to sleep the night before. I seriously needed a drink just to make my mouth moist again. 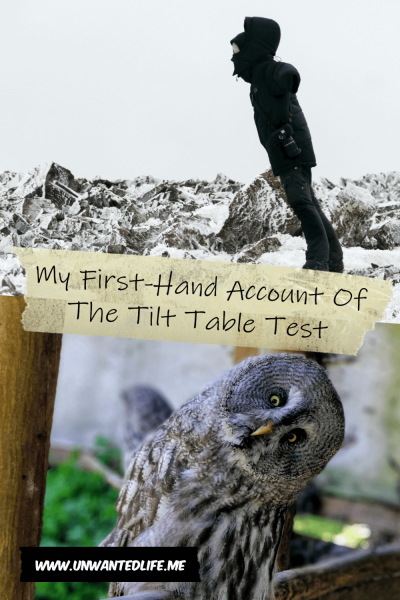 I did have a brief moment of panic during the tilt table test when I suddenly started to feel abnormally hot. Feeling abnormally hot like that is a trigger for my anxiety disorders. It’s also a warning sign that I might lose the ability to move, making it a double trigger: lucky me. However, I managed to rein it in before I became lost to its momentum, which would result in a psychotic episode.

As part of the test, they offered me a spray that will open up my blood vessels, which they spray under your tongue. It opens your blood vessels in order to see how your body handles the drop in blood pressure it causes. Thus helping to generate the data they need. Even though this sounded like it could make my anxiety fear come true, I agreed to do it: anything to help get better data for my tests. If they can pin down what’s wrong with me, then hopefully they can treat it and return me back to a better quality of life. Luckily, my anxiety fear didn’t come true after it’s administration.

The spray did increase the sensations my body was generating to trick me into thinking I needed to go to the bathroom, which was annoying. It also made me feel really rough with dizziness during the last 10 minutes of the test. Although, it wasn’t quite as bad as I felt on my way to the tilt table test.

The first thing I did after the test was to go to the bathroom. I needed to get rid of the annoying sensations so I could go get something to eat and take my medications.

The test didn’t make me feel anywhere near as rough as one of my normal days, let alone my worst. It also didn’t even compare to how I felt when trying to get to the tilt test, either. Moving around clearly plays a much bigger role in my symptoms rather than going from laying down to standing up, even when made to stand up for a really long time. But who knows what the results will show.

The side effects of taking the drug they sprayed me which meant I’ve been struggling with a really fuzzy head and a headache while trying to write this post. Hopefully, I won’t make too many mistakes because of it.

Just so you know, I did get my American pancakes with bacon, plus scrambled egg after the test. Lovely, although I couldn’t finish it all.

As always, leave your feedback in the comments section below. Also, feel free to share your own tilt table test experience, or if you just really want to talk about American pancakes with bacon and scrambled egg, then let me know in the comments section below as well. If you want to stay up-to-date with my blog, then sign up for my newsletter below. Alternatively, get push notifications of new articles by clicking the red bell icon in the bottom right corner.