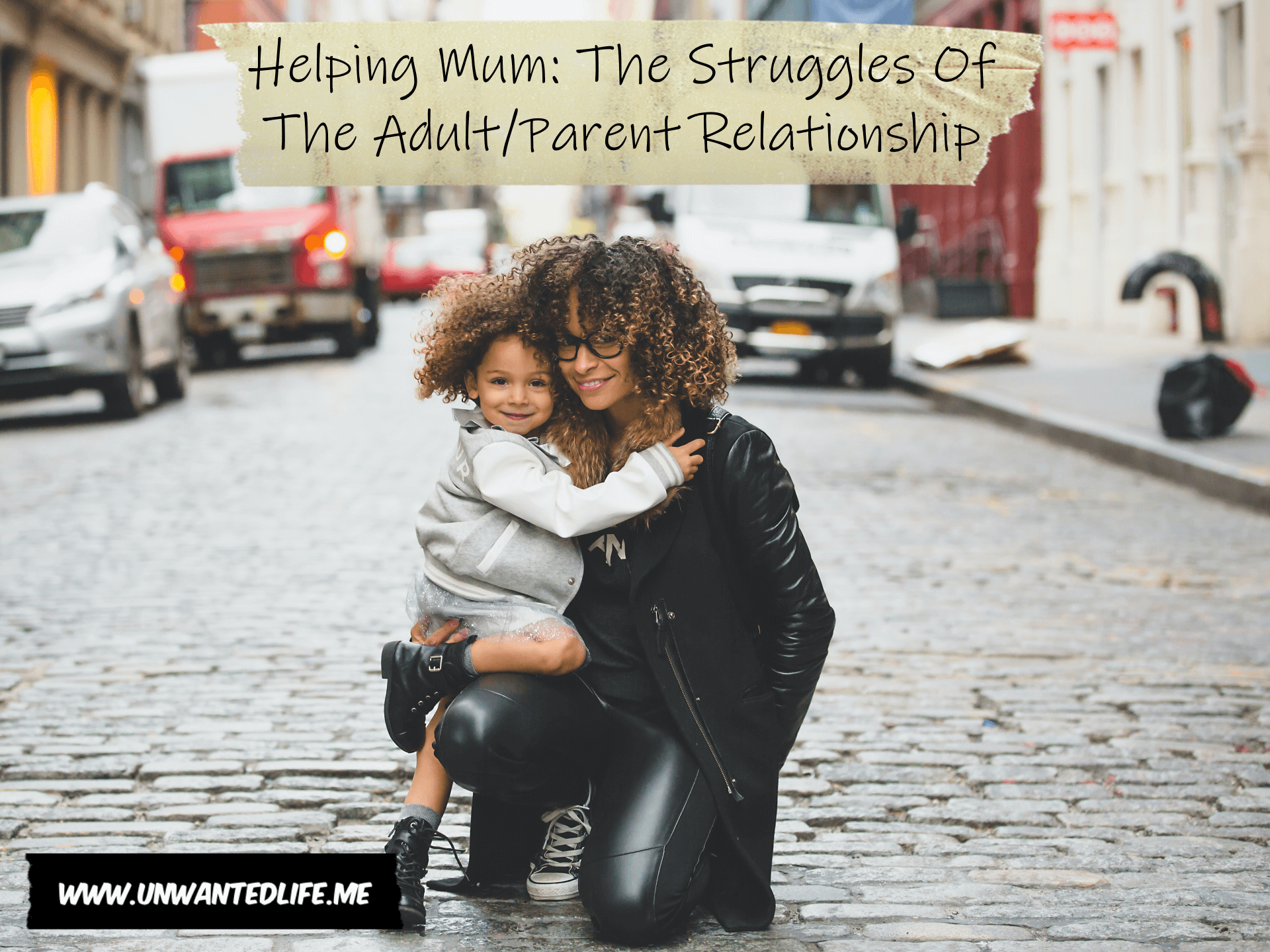 No one knows how to get under our skin like family does, but it’s not always because they know which buttons to press. More often than not, we’re just primed to act angrier and annoyed with our family. If a friend or co-worker had said the same thing or behaved the same way, it’s likely it wouldn’t have bothered you nearly as much. For me, just the sound of my mum’s voice causes a negative change in me, as such, I hate helping my mum as I have to interact with her for longer.

The Adult Child And Parent Dynamic

The relationship between a parent and their child is one of the longest and emotionally complex social ties we have (Birditt, Miller, Fingerman, and Lefkowitz, 2009). Because of this, the child/parent relationship can be stressful for a lot of people. I am one such person. This social tie starts at birth, for the child, but often before that for the parents, typically enduring until the parent(s) or child dies, no other relationship lasts as long, with one exception, twins (Fingerman and Birditt, 2011).

The kinds of interpersonal tensions that can exist between a child and parent(s) that can provide irritations can range from minor things like a verbal disagreement to overt conflict (Birditt, Miller, Fingerman, and Lefkowitz, 2009), like dealing with a racist parent, my mum.

Often such family stress can be caused by the generational difference between the child and parent(s), due to issues such as the parent(s) wanting their child to be well-established adults and thus proving they were good parents, rather than failures, if the child doesn’t progress well, i.e. money troubles (Fingerman and Birditt, 2011).

Furtermore, relationship tensions between the child and parent(s) likely represent more fundamental problems between them, such as unsolicited advice, personality differences, childrearing, and contact frequency (Fingerman and Birditt, 2011).

My mum and I couldn’t be more different, she has no issue using her religion to justify her awful views on immigrants, refugees, LGBTQ+ people, etc. whereas I’m an atheist who thinks everyone has the right to try and live a happy life as long as everyone involved is consenting (you don’t get to treat your parent badly because it makes you feel good). Then there’s the issue around my childhood where I had to endure relentless racist abuse with no emotional support from my mum (she’s white and I’m mixed, black/white).

The lack of support for the abuse I suffered lead to me being suicidal by the time I was eight, which has meant my mum and I don’t have a great relationship. However, I seem to be the only one who’s aware of that fact out of the two of us. It’s either that or my mum doesn’t care that our bad relationship exists as she and her faith are more important.

As I’ve said before in “Childhood Neglect: An Awkward Phone Call With My Mum“, it was a pain trying to organise my mum’s visit and helping her get everything sorted out. Helping my mum is just so much hard work. So, of course, there were going to be more issues around having to contact my mum before she comes down for the weekend.

On the run-up to my mum coming down to visit (Let The Battle Begin: My Weekend With My Mum), I called her to check she’d sorted the list of things we agreed she’d do when I last called her: she can be pretty useless with doing the stuff she needs to do. Had she done any of them? No.

I often ask myself why I even bother to help her if she’s not going to do anything with the help I give her. Why am I wasting time helping my mum if she’s going to ignore me?

Over the course of the last few months, I’ve looked up information for my mum and then emailed her about it. I also reminded her to check the information I sent and to choose which options were best for her. But she still hadn’t even looked at the emails containing all the information she needed.

My mums being ripped off by Virgin Media with a broadband and TV package she doesn’t need. They’ve convinced her to be on one of there fastest download speed packages, charging her for what is essentially Freeview channels, costing her over £44 a month. 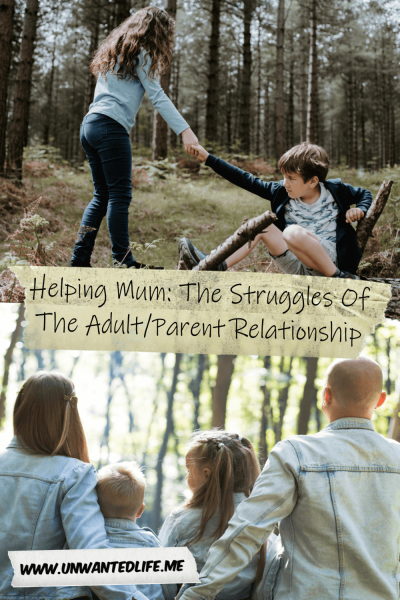 So I found her a number of broadband deals that better suits her actual internet requirements, which is basically nothing. I also checked her TV was a smart TV that had access to all the Freeview channels she’s paying Virgin Media for, so she wouldn’t miss any of the channels. All she needed to do was tune the channels in, so I told her to look through the TV manual to figure out how to do that. I’ve been telling her for months to get this sorted out, but has she done anything about it yet? No. Seriously, helping her is a massive waste of my time and is always a cost to my mental wellbeing.

She also wants her first smartphone, so I asked her to practice using the tablet I got her when she was undergoing treatment for her cancer. She’s never used a smartphone before, and the phone she currently has I bought for in 2003. If she could figure out how to use the tablet, then I could figure out her needs and ability with a smartphone so I could sort one out for her, when she came to visit. Did she do that? No.

I asked her to ask her family and friends what networks they use so we could get an idea of which networks were good for where she lives. My home town is a bit of a mobile network blackhole. Just terrible network coverage. I don’t want to put her on the wrong network. Did she at least do that? No. She’s not helping herself by not helping me help her.

However, she foolishly signed off before even checking any of the information I found out for her. She also didn’t talk to anyone else about what her benefit entitlements were either, as I suggested. I still don’t think she’s looked at any of the information I got for her, and it’s been about 2 years now. She didn’t even go to Citizens Advice as I told her too. If you saw self-sabotaging in a book, it would have my mum’s picture next to its definition.

Due to this inheritance and my mum being unwilling to spend it on herself or give it to charity so that she could get her benefits back (rather than living off the inheritance, because it won’t last that long), I found her a load of banking information so she could open some new savings accounts, bonds, etc. Has she looked at any of the banking information I found for her? Of course not, my efforts would be for nothing yet again.

I’ve tried talking to her about her options in regards to this inheritance numerous time, but she refuses to listen to me for some reason. Pretty much just sticks her fingers in her ears and goes “la la la, I’m not listening”.

I’ve never expected to inherit anything from my mum we’ve never had anything. We were so poor I used to bath in two inches of water, we rarely had the heating on, etc. So I told her when she got the inheritance she would be better off spending most of it or giving it to charity in order to get under the threshold for her benefits. That would have allowed her to live off her benefits rather than her inheritance, and left her with some emergency money.

She’ll most likely never work again due to the damage her cancer did to her bones. Meaning she’ll burn through that inheritance in no time just paying her rent and bills. She could have done something nice for herself instead, like going on holiday or engaging in some charitable deeds. But no, that’s not what she wants to do.

What was I lucky enough to get in return for all my efforts instead, rather than progress on all the stuff I’ve been trying to help her with? You guessed it (if you’ve read my other article on Avoidance: Toxic Family And Protecting Your Wellbeing), as is the norm with my mum, she talked about my personal situation forgetting all the realities of my health problems and forgetting all our previous conversations where I’ve had to correct her time and time again about my health problems.

Just what I needed the night before she was going to be coming down to meet me for the weekend.

The way she trivialises my mental and physical health problems really grinds my gears. She’s one of my biggest triggers for destroying my motivation and making me more depressed.

Knowing that she has the power over me, I still put myself in harm’s way to keep helping her because if I don’t, she’ll just be taken advantage of by someone else. Just like what Virgin Media did. If someone’s not with my mum that knows about smartphones when she goes to get one, she will be tricked into getting something she doesn’t need.

Plus, if she gets a model I’m not familiar with, then it’ll make it harder for me to explain how to use it over the phone. It’s a real mission trying to explain even the most basic things to do with the tablet or her computer. I’d really like that not to be harder than it needs to be. Helping her is just so dam stress-inducing.

Virgin Media was able to con her because she didn’t even know her TV could be tuned in for the Freeview channels they were selling her. She also thought she needed this ridiculously fast broadband package to handle big Word and PDF documents. She didn’t understand the sheer difference in size between those documents and the size of files you’d need to be downloading to justify this superfast download speeds.

I just want to slap her and say:

The relationship with my more was made worse by the recent black lives matter (BLM) movement for equality and justice. My mum started parroting far-right conspiracy theories (white replacement theory) to me. This led to me writing a letter to my mum about the whole situation that was triggered by BLM, which I turned into an article that you can read by clicking here.

As always, leave your feedback in the comments section below. Also, feel free to share your experience of family stress and your stories of trying to help your parents in the comments section below as well. If you want to stay up-to-date with my blog, then sign up for my newsletter below. Alternatively, get push notifications of new articles by clicking the red bell icon in the bottom right corner.

16 thoughts on “Helping Mum: The Struggles Of The Adult/Parent Relationship”