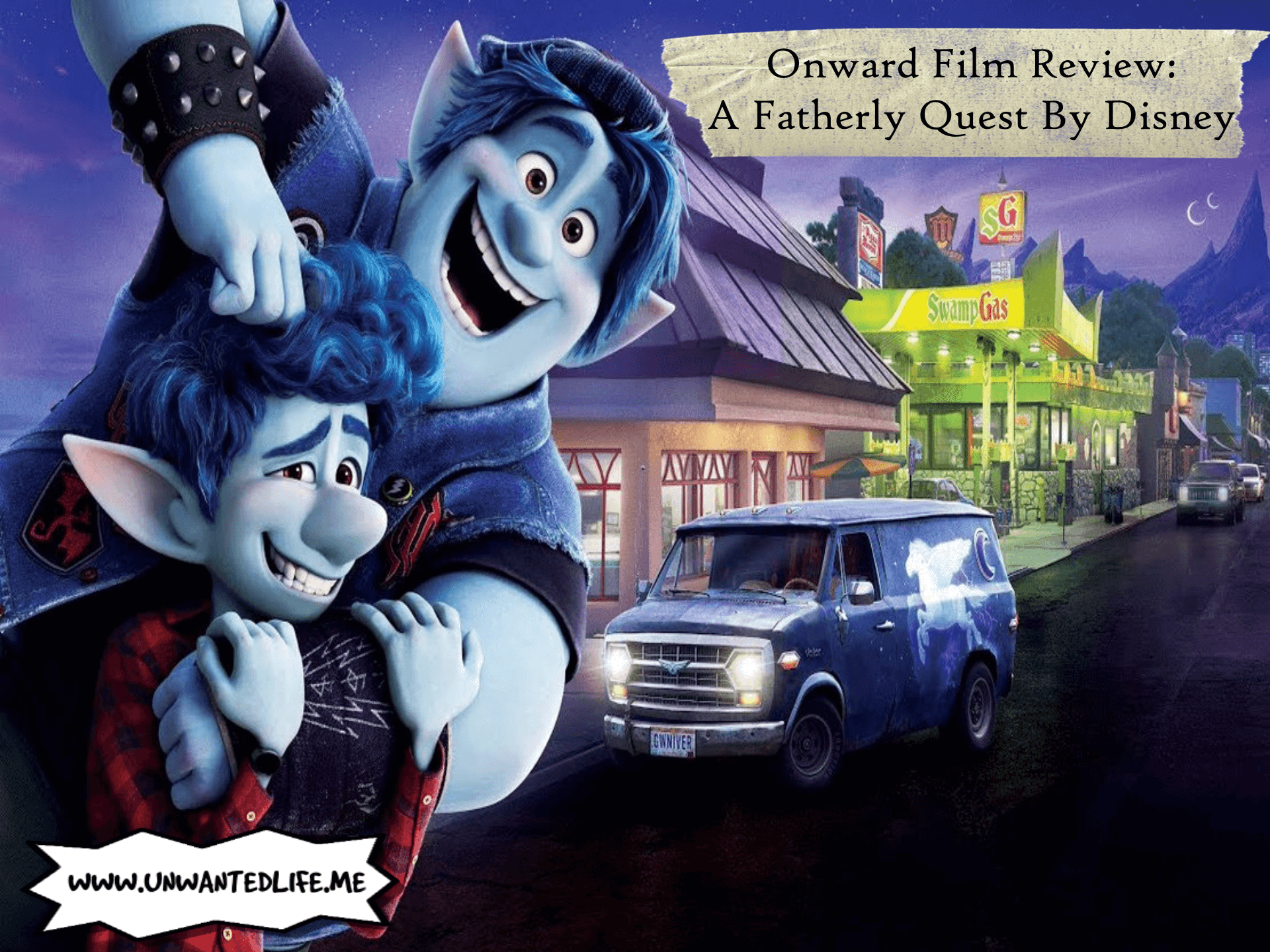 Given that Father’s Day is almost upon us (21st June), I thought I’d discuss and review the firm Onward. So strap in and prepare for insights into fathers and father figures.

Set in a suburban fantasy world, two teenage elf brothers, Ian and Barley Lightfoot, go on a journey to discover if there is still a little magic left out there in order to spend one last day with their father, who died when they were too young to remember him. Like any good quest, their journey is filled with magic spells, cryptic maps, impossible obstacles and unimaginable discoveries. But when the boys’ fearless mom Laurel realizes her sons are missing, she teams up with a part-lion, part-bat, part-scorpion, former warrior — aka The Manticore — and heads off to find them. Perilous curses aside, this one magical day could mean more than any of them ever dreamed

This is your last chance to avoid spoilers if you’ve not watched the film yet. You’ve been warned.

The story, or quest, to meet their dad, is pretty epic, but the love they all seem to have for each other makes the film a classic that will tug on your heartstrings.

An opportunity arrives that means Ian Lightfoot will get to see his father, and allow him to do everything he wrote on his to-do list if he ever got to meet him.

Watching a film about two elves desperately trying to see their departed dad again, for just one day, really hits home with me. I can’t imagine going on a dangerous quest to see my father when my father had zero interest in my existence, which is especially hard to take given that he regularly sees my half-sister (the only one out of many half-siblings that I know).

Ian Lightfoot’s realisation that all the to-do list moments he wanted to have with his dad, should he ever get to see him, he had had with his big brother. It would have been nice to have had that kind of closeness and family connection with my parents or half-siblings, but I never did. Thanks to having BPD, I can’t even have that connection with anyone at all.

The final acceptance of their stepfather that rounds off Onward were also a nice touch. Onward really hits you from all angles with it comes to the family structure and family love. 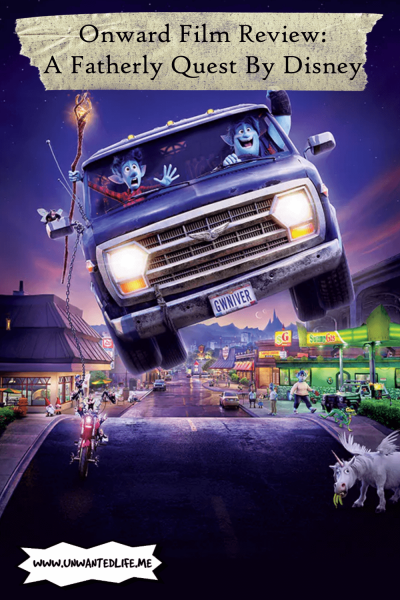 According to Behere, Basnet, and Campbell (2017), there’s a lot of evidence that points to the disadvantages of being from a single-parent family when compared to the traditional family (whatever that’s meant to mean nowadays). However, these issues could be influenced by economic difficulties that often come with raising a family as a lone parent, which will understandably place extra stress on the lone parent.

So before you go writing off single-parent families, remember that even two-parent families can be harmful to the mental wellbeing of the children. According to the Office for National Statistics (2019), children from families that struggle to function well have a higher rate of mental health issues than those from healthy-functioning families. In simple terms, if you’re from a family that is staying together for the children and arguing a lot, there’s a likely chance you’re doing more harm to the children than if you separated but both have a mutual and healthy co-parenting relationship instead.

A study that fits the film’s family dynamic, although not perfectly (I’ll let you be the judge of that), comes from Manning and Lamb (2003). They found that teens living in cohabiting stepfamilies experience greater disadvantages than those from married stepfamilies, but they also found that teens living with single unmarried mothers are similar to those with cohabiting stepparents.

Furthermore, disruptions to the family structure can lead to adverse events impacting both the mental health of children and their parents (Behere, Basnet, and Campbell, 2017). This goes to show just how complex family dynamics can be. It also suggests that a stable single-parent family structure should have fewer adverse effects on the children than a dysfunctional two-parent family.

Yes, we were poor, needing government assistance to keep a roof over our heads, but not enough to be able to have the heating on in the winter. We also had to use a foodbank and heavily relied on my grandad growing vegetables and biking across town to drop them off for us every Friday evening. That man, my grandad, was my dad, as he was always there for us (What Makes A Father On Father’s Day?). This poverty, which made life hard, wasn’t what ruined my mental health.

People seem to assume that if you’re from a single-parent family you’re automatically going to have issues, but that isn’t necessarily the case. My lack of a biological father in my life was never a problem for me. My problem was years and years of sustained racist abuse and a lack of support from my mother (neglect). If it wasn’t for that, I would have never developed the problems I did and I would have been a completely different person.

Being from a single-parent family in and of itself isn’t to blame for the struggles. It’s the extra stress and pressure that comes with it that creates the problems. Even more so if you’re a Black person in a White family in an almost all-White town.

I never had a father in my life, so I could never miss what I didn’t have. Thus, people from families where the parents break up might have a harder time than those that were never parenting together in the first place.

Much like in Onward, I tried to reach out to my biological father in order to form a relationship. However, unlike in Onward, my attempts didn’t have a happy ending(?), because it didn’t work out. Both my parents share the blame on why, but I gave up trying to create a relationship with my sperm donor of a father because he clearly wasn’t interested.

My dad would stop coming to see me around my birthday and Christmas to avoid having to get me anything. When he did visit, he was only really interested in seeing my mum, even though he was living with his partner and some of his other kids.

One time, my dad paid for me and a friend to go to the cinema (so he could be alone with my mum), and when I came back I was greeted by my dad walking down the front garden path and my mum screaming at him to never come back, and he never did.

I was 14 the last time I saw my dad, and I never bothered to make contact with him again because he never had any interest in seeing me in the first place. He also never made any attempt to contact me again after that day, either.

What makes this all worse was that not only did my dad show me that he never cared about seeing me or getting to know me, my mum became my dad’s bit on the side, with my mum only caring about having that relationship with my dad, and not about the relationship between my dad and I.

As I said in ‘Family Dynamics: Happy Mother’s Day?‘ article, my mother has never cared about my emotional needs, and she showed that again when I tried to establish a relationship with my dad.

I originally never planned to watch the film, as I judged the film by its cover and it didn’t appeal to me. But I’m glad I took the time to watch it in the end, as it really hit me in the feels.

The film helped to highlight what I said in my Father’s Day article last year, that anyone can be your father figure. It doesn’t have to be your biological dad, which the big brother character, Barley Lightfoot, helped hammer home.

One thing I would really like to know about the Onward and the older brother character, Barley Lightfoot; was he based on Jack Black, or rather his on-screen persona, which he’s best known for? This also begs the question, why wasn’t Jack Black the voice of the character that seems to be Jack Black?

Anyway, I recommend watching this Onward over Father’s Day with your dad, stepdad, foster dad, grandad, big brother, or whoever else felt like a father to you.

As always, leave your feedback in the comments section below. Also, feel free to share your thoughts on the film and/or your relationships with your father or father figure in the comments section below as well. If you want to stay up-to-date with my blog, then sign up for my newsletter below. Alternatively, get push notifications for new articles by clicking the red bell icon in the bottom right corner.

Office for National Statistics. (2019). Children whose families struggle to get on are more likely to have mental disorders: Healthy family functioning and parental mental health are important elements in understanding the mental health of children. Retrieved from https://www.ons.gov.uk/peoplepopulationandcommunity/healthandsocialcare/childhealth/articles/childrenwhosefamiliesstruggletogetonaremorelikelytohavementaldisorders/2019-03-26.

49 thoughts on “Onward Film Review: A Fatherly Quest By Disney”