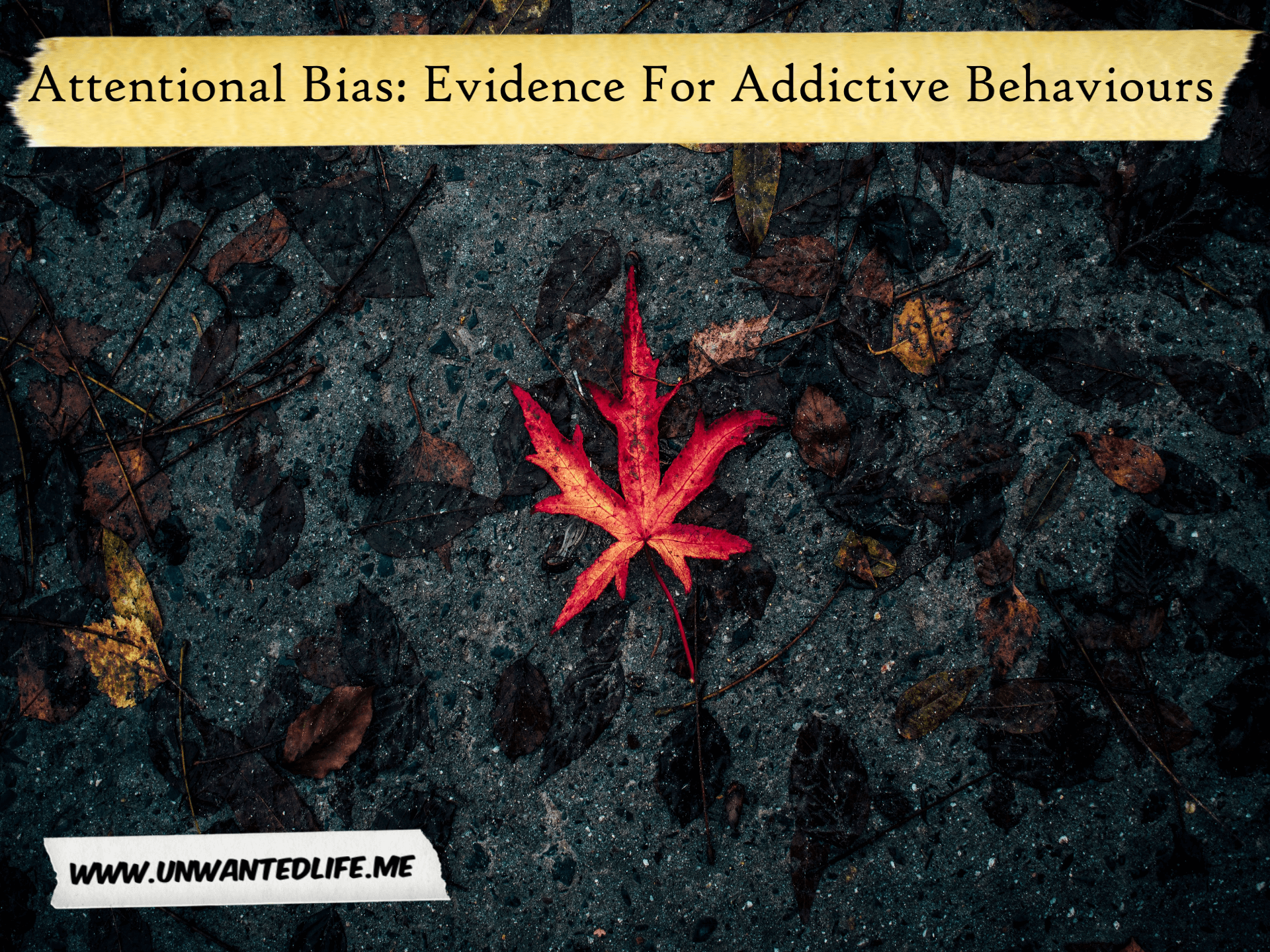 Let’s start with a quick definition of attentional bias. In relation to addiction and mental health, attentional bias is the tendency to focus more on certain things, which might also mean simultaneously ignoring others.

Attentional bias in addiction is not a unique consequence of addiction, it can be found in the average healthy person who doesn’t or hasn’t suffered from substance dependence, through simple exposure to associative learning between any stimuli and a rewarding outcome.

The difference between those suffering from addiction and non-addicted people is how it goes from our brain’s normal desire to facilitate previously rewarded behaviour to something more pathological that has stopped being of benefit to the system (Anderson, 2016). As Christiansen, Schoenmakers, and Field (2015) put it, an anxious person will pick up on threatening shapes in the shadows and the corners of their eyes, the struggling dieter will notice the deserts in the café, and the depressed person will favour the negatives comments over of the positive ones. Attentional bias is a problem for many people struggling with a range of issues, addiction is no different.

Field and Cox (2008) stated that attentional bias in addiction works through classical conditioning (learning through association), with the attentional biases being paired through repeated use and reward of what will become their addiction. For example, pairing drinking with the sight of a pub leads to unconditioned stimuli triggering an unconditioned response. Simply put, you learn to associate seeing a pub with drinking through repeated enjoyable drinking episodes at a pub, which will then trigger a drinking response whenever you see a pub.

However, some people see this explanation of attentional bias as being too simplistic regarding its effect in addiction. This is where the incentive-sensitization theory comes into play. Robinson and Berridge (2001) pointed out that there was a problem with the previous theories’ attempts at explaining addiction and attentional bias because they often thought that people suffering from addiction engage in their addiction for pleasure or to avoid the undesirable consequences of withdrawal.

Incentive-sensitization theory, however, states that associative learning, like that of classical conditioning of stimuli and pleasure reward, forms what is known as “liking”. However, there is a secondary component, where the “liking” stimuli become overly sensitized, to the point that those suffering from addiction will seek to engage in the behaviour, even when the “liking” of the behaviour has long gone, this is known as “wanting”.

Thus, those suffering from addiction experience pathological “wanting” (or craving) which will continue even as those suffering from addiction dislike engaging in the behaviour. This take on attention bias, craving, and addiction explains the problem with relapsing, even after significant time without using, because their cravings can be triggered by attention-grabbing things they’ve associated with using the substance they’re addicted to or were addicted to.

A study by Field, Munafò, and Franken (2009) found that the relationship between attentional bias and craving could be modified by other factors, such as the state of craving someone was in. This is something Waters et al. (2003) also believed, finding that attentional bias impacts smokers in a number of ways, with individuals with a larger collection of paired attentional biases being more likely to notice more addiction related-stimuli in their surroundings. Basically, a heavy smoker will more likely be triggered to smoke than a new or casual smoker, as they’re more likely to have paired more objects and activities with smoking.

Waters et al. (2003) also offered some other insight, whereby there could be other mental processes going into action as well, such as conditioned withdrawal or intrusive thoughts. For example, the attentional bias stimuli might trigger a depressive thought pattern of how you are a bad person, rather than triggering a craving to smoke, which will affect cessation attempts and day-to-day activities.

In short, if you haven’t learnt to change or mitigate your reactions to the addiction-related attentional biases that draw your attention, then reaching your recovery goals will be difficult.

Niaura et al. (1988) also suggested that along with altering reactions to addiction related-stimuli, a comprehensive treatment model should also feature coping skills for cravings, as well as other modifying factors to attentional biases and cravings, like stress (Tiffany, 1990). Therefore, any treatment programme should have components that try to identify clients’ triggers (addiction related-stimuli), create plans to overcome those identified triggers, have backup plans for how to manage cravings should they be triggered, and teach other skills to help people avoid being in a more susceptible state where being triggered is more likely. 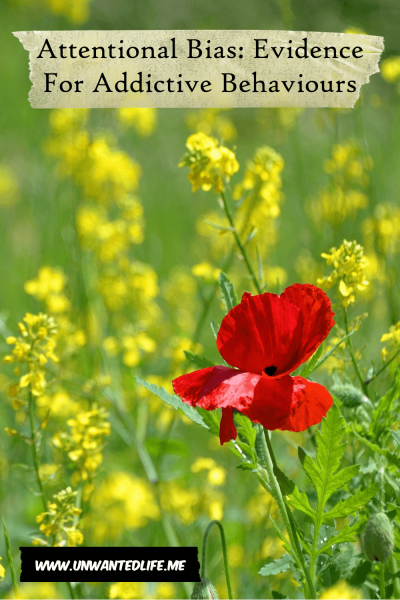 This is supported by Waters et al. (2003) study, which I mentioned earlier. However, what I didn’t mention then was that this study involved putting 158 smokers randomly into a group with a nicotine patch or a placebo patch, where they had to do a Stroop task. For those that don’t know, a Stroop task it involves the mismatch between the name of a colour and the actual colour of that word, for example, Blue, Red, and Pink, with you having to say the colour of the word and not the word itself.

The results of Waters et al. (2003) Stroop task showed that the nicotine patch group having a source of nicotine replacement to reduce their cravings, displayed less attentional bias to addiction related-stimuli than the control/placebo group. This study managed to show the importance of attentional bias in engaging in addiction behaviours and relapsing, and how important it could be for the treatment of addiction.

This is supported by Kerst and Waters (2014) who conducted a study on attentional retraining on 60 smokers who weren’t looking to quit, split into two groups (attentional retraining and control). Both groups were asked to complete four assessments a day, for a week, using a PDA. The results showed two important things: the first was that attentional retraining can reduce attentional bias, and the second is that it can be done using a mobile device, such as a phone. This study offers the potential of creating a smartphone app that would allow people seeking help with their addiction, to be able to work on it whenever and wherever they wanted, which would be a useful tool for those seeking treatment or who have completed treatment.

All this highlight the importance of individual differences in attentional bias as well, which could explain why some people suffering from addiction have a much harder time giving up than others. That is because everyone will have their own attentional biases and modifiers that need to be tackled with strategies that use the individual’s strengths to mitigate their weaknesses.

Interestingly, the increases in attentional biases for addiction related-stimuli among those suffering from addiction also seem to spread to other reward related-stimuli, according to a study by Anderson, Faulkner, Rilee, Yantis, and Marvel (2013). They conducted a small study on 17 opium dependent and 17 control participants and found that the opium-dependent participants also displayed attentional bias towards previous nondrug reward-related stimuli.

However, according to Field et al. (2016) who conducted a review of the attentional bias literature on obesity and addiction, found that the relationship between attentional bias and how it affects behaviour is overestimated. Thus, even though we might have an attentional bias towards addiction related-stimuli, how that then goes on to affect our behaviour is somewhat of a grey area, as it allows for the possibility to start mechanisms that would trigger a craving, but does not guarantee it.

To sum up, the evidence shows that attentional bias exists in addiction, but how significant a role it plays might be the real question that needs answering. Attentional bias has been shown to have links to cravings and how it can affect lapsing/relapsing. Without attentional bias, can craving treatment be as effective as it could be? So what do you think? Is attentional bias a useful thing to add to the treatment of addiction or not?

As always, leave your feedback in the comments section below. Also, feel free to share your experiences of attentional bias and addiction in the comments section below as well. If you want to stay up-to-date with my blog, then sign up for my newsletter below. Alternatively, get push notifications for new articles by clicking the red bell icon in the bottom right corner.