What Is Domestic Abuse?

After writing 24 Ways To Manage Anger and Abuse: Female Perpetrators, Male Victim, I thought it’d be a good time to describe what domestic abuse is. That’s because people better understand what domestic violence is and don’t realise that the other forms of abuse that domestic abuse covers is actually abuse. Thus, hopefully this post will help spread awareness so people can know the warning signs and seek help sooner.

Before we get started, let me just say this. Everyone will have to deal with arguments and disagreements from time-to-time. But the key distinction here between this and domestic abuse is the frequency and if it forms a pattern. Because it’s ok to argue and have disagreements, because we’re individuals and have different needs and drives. It’s not ok to force other people to stop caring about their own needs and exclusively putting someone else’s needs above their own.

Domestic abuse can happen to anyone. However, women make up the vast majority of domestic abuse cases, with men being the perpetrators (Women’s Aid).

I’ve been a victim of two different forms of domestic abuse (Abuse: Female Perpetrators, Male Victim), and I’m a guy. I’ve also known several of my female friends and family to have suffered domestic abuse as well.

No one, no matter your age, race, sexual orientation, gender preference, etc. should be a victim of domestic abuse. We all deserve to feel safe, valued, and respected, especially by those that are meant to love us.

Unfortunately, society has normalised unhealthy behaviours, which is why it can be hard for people to identify abuse when it’s happening.

The worst part about domestic abuse is how it can escalate to murder. What starts out as threats can soon escalate to violence, and in some cases, end up with the target of abuse being killed.

Furthermore, according to Safe Lives, 100,000 people in the UK each year are at imminent risk of being killed or badly harmed as a direct result of domestic abuse.

This is what makes domestic abuse an important societal problem that needs to be addressed.

What Is Domestic Abuse?

According to the Crown Prosecution Service (CPS), domestic abuse is defined by the Government as any incident of controlling, coercive/threatening behaviour, violence, or abuse between those aged 16+ or those who could be classed as an intimate partner or are family members.

Essentially, domestic abuse is the combination of two forms of abuse, control and coercion. The UK government (Gov.uk) has defined both of these as the following:

These two forms can be implemented by engaging in the following 6 different forms of abuse:

This form of abuse is characterised by trying to affect and distort another person’s sense of reality (Gov.uk). Nowadays, this is often referred to as gaslighting. The aim is for the abuser to create doubt in their target, to make them think they’re incompetent. They can do this by making the victim question their own memory. Or they can constantly deny something to the point that even though you are in fact right, you start to doubt that you are.

Use of threats can also be used to psychologically abuse their target, so that they live in fear that their abuser might act upon the threats they’ve made.

To physically harm the target, such as pushing or hitting the target. However, it can also be that the abuser is breaking stuff around the target, punching a wall, and throwing stuff to show physical dominance.

This form of abuse involves sexual behavior or a sexual act forced upon the target without the consent of said target, or with consent given under duress. For example, saying they’ll rape you or hurt your kids if you don’t sleep with them.

However, abuse of this sort is not restricted to just rape, and covers all forms of sexual assault. For example, they might touch you in a way you don’t want to be touched.

This form of abuse is designed to attack the target’s sense of self-worth and undermine your self-esteem. This is largely done through the use of manipulation. The aim is to make the target feel like no one else will want you besides your abuser (Help Guide).

Emotional abuse can take the form of: derogatory pet names; name calling; yelling; shaming; blaming; patronizing; insults; belittling you and your achievements; and dismissing you.

This is when abusers use aspects of a victim’s cultural identity to abuse their target. Such as not allowing their target to observe their dietary or dress customs of their faith, using their race against them, or threatening to ‘out’ someone as LGBTQ+ (Reach).

Domestic abuse can become a pattern of abusive events, taking the form of controlling, coercive, threatening, degrading, violent behaviour, and sexual violence (Women’s Aid). In other words, a cycle of abuse.

This is supported by CPS, who state that domestic abuse is rarely a one-off. Instead the abuse will build up and get more frequent over time. The abuse used will also take many different forms over this time too.

They’ll tell you it’ll never happen again, they’ll try to make amends and tell you they love you. But this is all part of the abusive cycle. They do this because it makes the target of the abuse minimise the original abusive behavior.

An abuser will act upon their desire to abuse their target, but they’ll soon follow that up with excuses and apologies. They do this in order to keep you in the abusive relationship. Then comes the honeymoon phase, where the abuser will act all nice, give you gifts, and everything will seem fine. However, this won’t last forever and the build up to the next abusive event will start to begin. The result of which will take you back to the start of the abusive cycle. This will keep repeating itself until the target of abuse is out of the situation.

Am I In An Abusive Relationship?

If any of the abusive signs (although not a full list) resonate with you, then maybe you should fill in Women’s Aid’s online form. Which you can do by clicking here.

You should take the test even if you don’t really think any of the signs listed here are something you’ve experienced, but the relationship is causing you to feel hopeless and/or feel desperate. I know in one of my relationships I feared going home because my abuser would be at home drunk (Abuse: Female Perpetrators, Male Victim). So if you feel something like that, or you feel you have to walk on eggshells around someone, then fill in the quick online form.

Sometimes we can’t see the wood for the trees. Thus a quick form like this might open our eyes to what we felt deep down was really going on.

Worried About Someone (Or Yourself)?

Due to the prevalence of domestic abuse, the chances are you know someone who is being targeted by an abuser or has been targeted. The very nature of this kind of abuse, and the fact it happens behind closed doors, means you likely won’t even be aware of it happening. Which makes helping someone experiencing domestic abuse extremely difficult.

That’s why educating people about domestic abuse is important, and why I decided to write this post.

How can you help

Some people might be open about their situation, and thus there are a few steps you could take to try and assist them.

Domestic abuse is a complex and difficult situation, not just for the person experiencing it, but also for you if you’re wanting to support the person. As such, you need to be patient for not just the other person, but for you as well.

Furthermore, leaving an abusive relationship takes a lot of strength. Leaving the situation might also be beset by a lot of problems that need resolving first. For example, if they don’t have access to any finances or have a place they can go.

Due to the nature of domestic abuse, those who are being abused might not realsie they are or may no longer see it as abuse. Thus, you may have to be direct in order to get the conversation going, or simply to get the person to start realising they’re being abused. You could say something like, “I’m worried about you because…” or “I’m concerned for your safety…”

Remind them that no one deserves to be abused, no matter what their abuser may claim. Acknowledge their strength for talking to you about the abuse they’re suffering.

If someone tells you about the abuse they’re suffering, believe them. Like I’ve previously stated, often the only person who’s aware of the abusers darkside is the person being targeted by the abuse. So make sure you tell the person that you believe them so you can better support them in this situation.

Help them to seek legal help, such as reporting the abuse to the police or going to a solicitor. You can also apply for a civil injunction or protection order.

Provide information for them about organisations they could contact, or other such information that might help them in their situation (for example, details of a solicitor or estate agent).

Allow the person to use your address to have letters sent to them so their abuser can’t get to them. You could also allow them to make calls and use emails at your place, to also help them keep information from their abuser.

Don’t tell them to leave the situation if they’re not ready, because it’ll take a lot of strength to leave their abuser and to stay away from them. If they’re not ready, then this could affect the supportive relationship that’s built up between the two of you. It can also cause the person to slip further into hopelessness, as well as making the abuse worse if the attempt to leave fails and the abuser finds out.

Don’t critise them for remaining in the situation either, because that’ll further isolate the person. Instead, keep offering them support, help them to gain confidence, and help them regain their self-esteem. Doing that will help them get ready to leave their abuser.

Come up with some self-care ideas in order to help them cope with the situation. But remember, you also need to look after yourself in this situation.

Supporting someone through domestic abuse is extremely emotionally and psychologically draining. I learnt that the hard way (Abuse: Female Perpetrators, Male Victim).

A few tips that’ll help you after you’ve left your abuser.

Domestic Abusive Behaviour Is A Choice

This might seem counter intuitive, but domestic abuse isn’t a result of the abuser losing control. Domestic abuse is a deliberate act. An abuser will wait until they think they’re in a situation where they can abuse you without anyone else catching them. If the abuser actually abused their target because they lost control, then they would also lash out randomly at other people who cause them to “lose control”, but they don’t. They have their target of abuse and they’ll save that abuse for that target.

As always, leave your feedback in the comments section below. Also, feel free to share your experiences of domestic abuse and advice on how to help those who find themselves in such a situation in the comments section below as well. If you want to stay up-to-date with my blog, then sign up to my newsletter below. Alternatively, get push notifications of new posts by clicking the red bell icon in the bottom left corner.

The Alternatives to Violence Project (AVP) 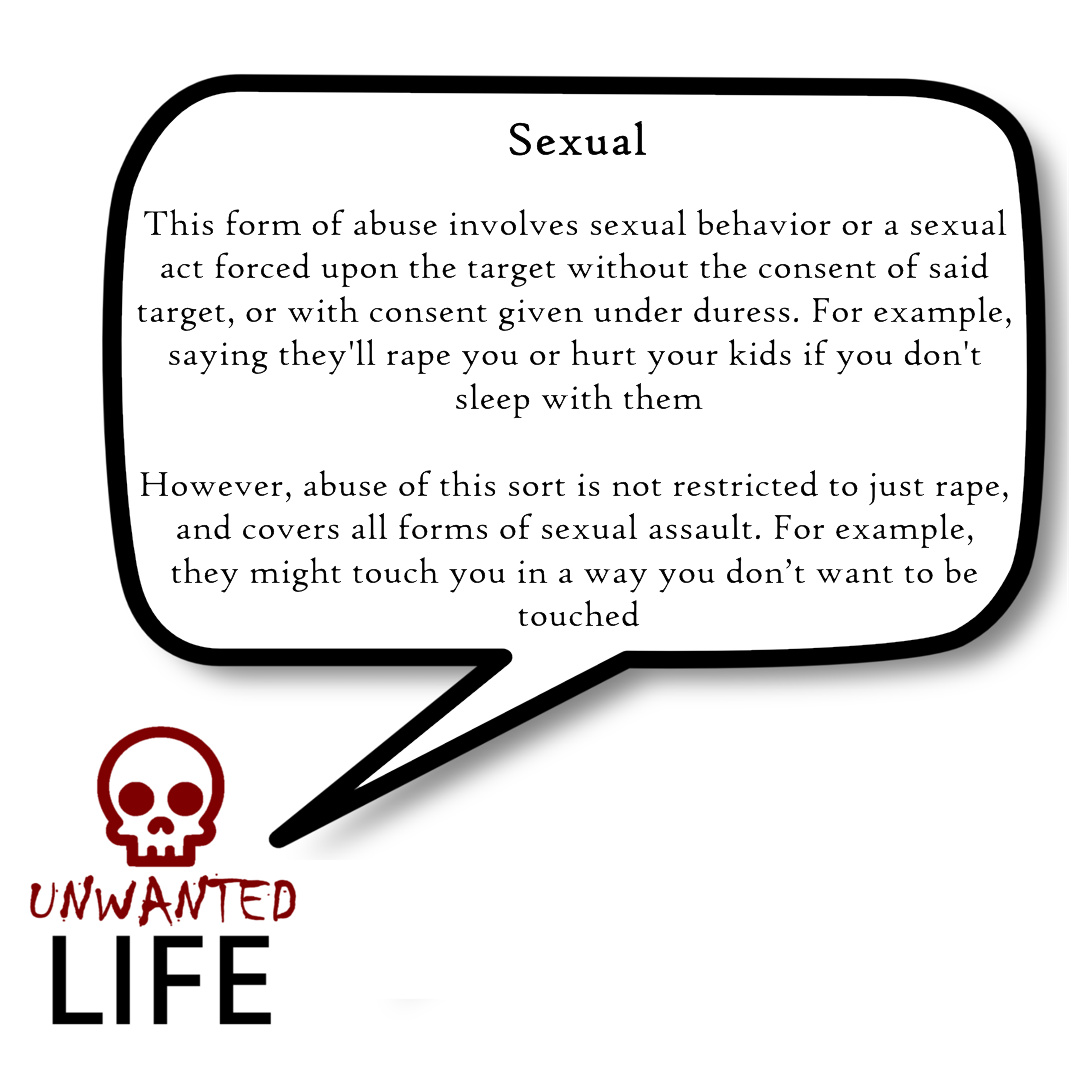 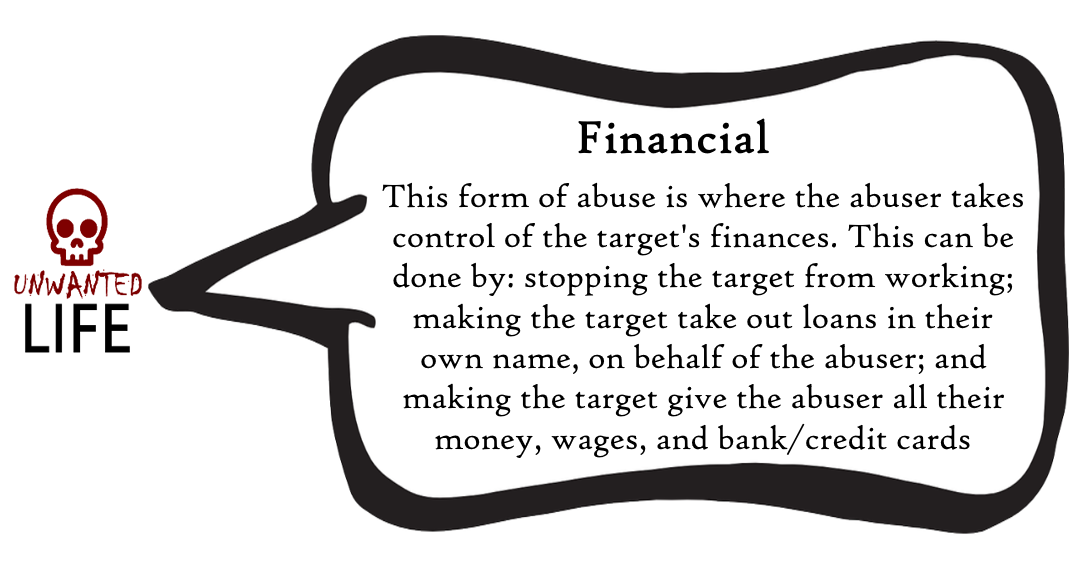 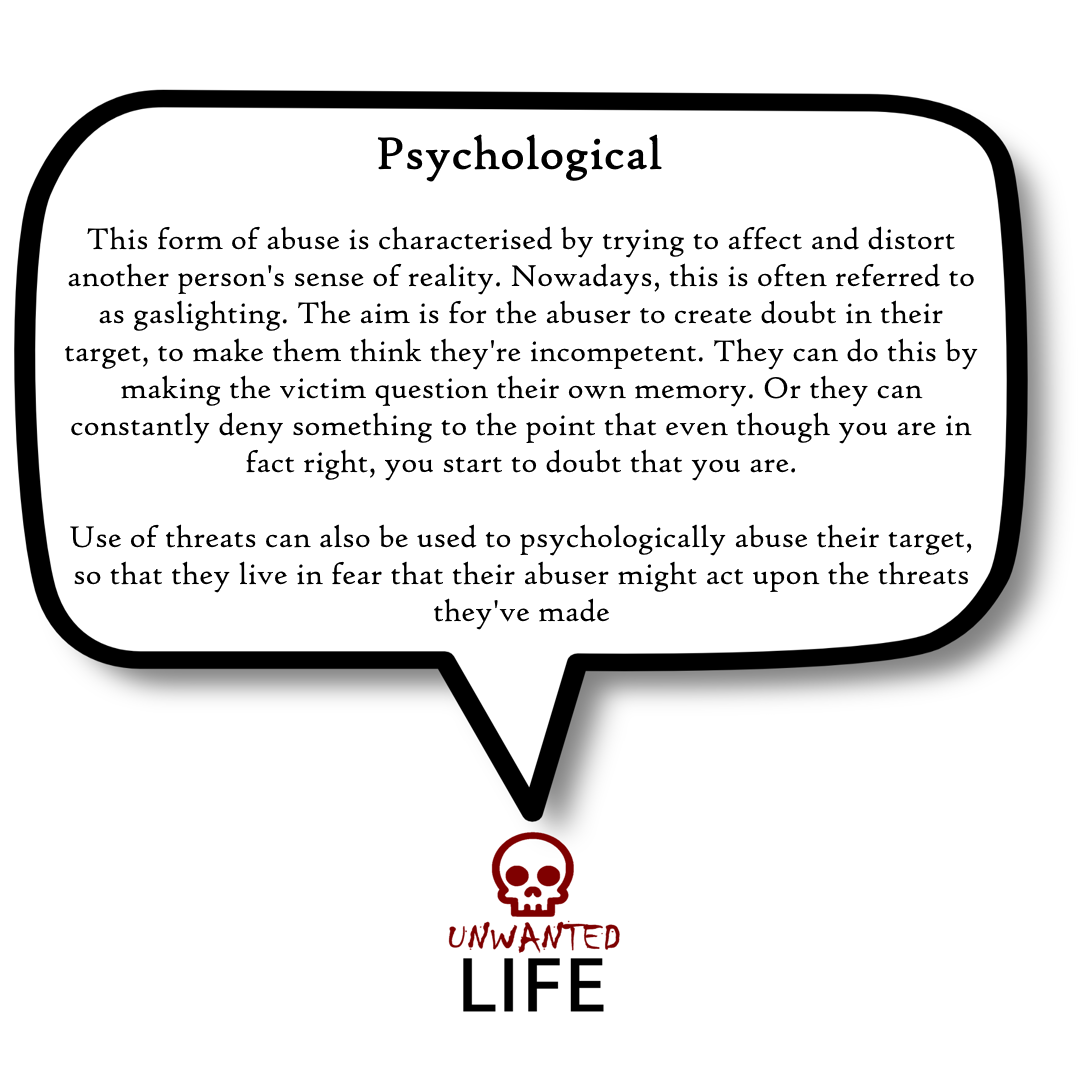 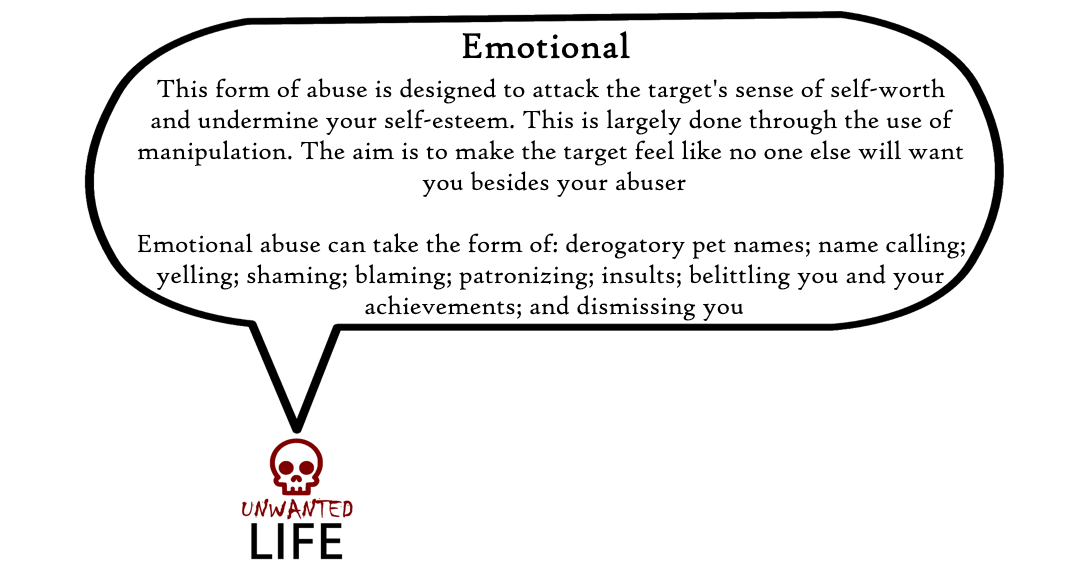 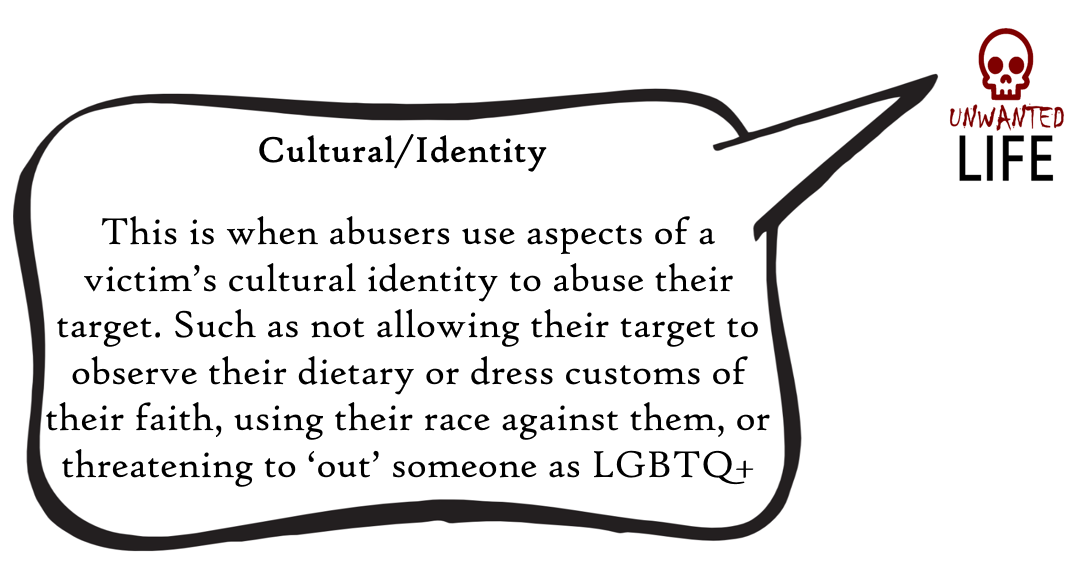 52 thoughts on “What Is Domestic Abuse?”