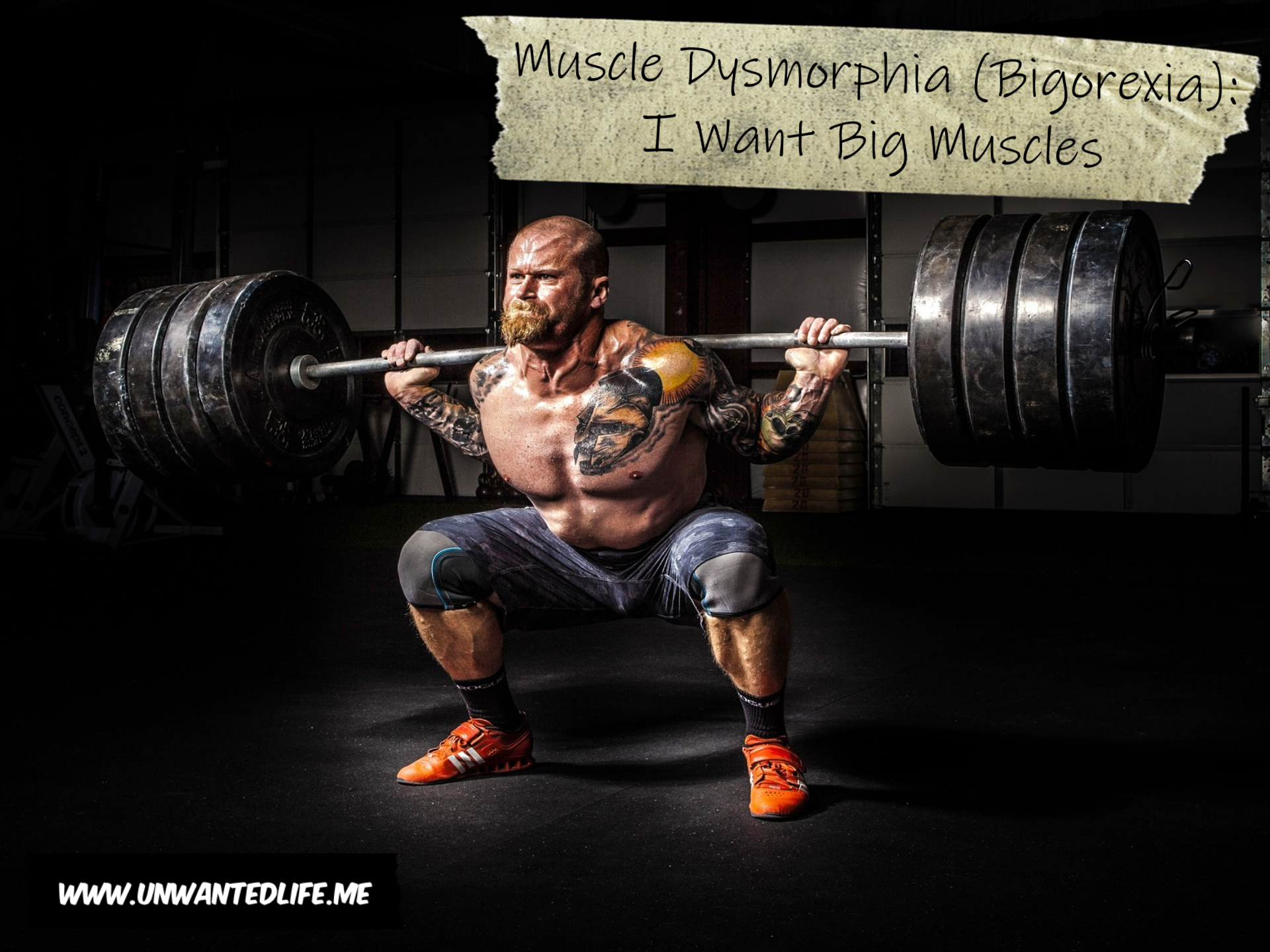 I first became aware of muscle dysmorphia after watching a programme by the BBC. Although I had mentioned this condition before in a previous article, I hadn’t really written about the condition in any great detail itself. Thus, I thought I’d correct that oversight. Plus, after writing about Beat’s eating disorder webchat and orthorexia, I felt I should follow on from that and write about muscle dysmorphia, as it plays a role in my body dysmorphic disorder (BDD).

Is Muscle Dysmorphia An Eating Disorder?

This is a good question, a question where Mosley (2009) makes their case for muscle dysmorphic disorder to be considered an eating disorder. They argued that people with this disorder have the same specific maladaptive patterns of behaviour for exercise and restricting their food intake as people with eating disorders. Mosley (2009) goes on to argue that the distinct cognitions and lifestyles of muscle dysmorphic bodybuilders to get bigger muscles mimics the phenomenology of someone with an eating disorder in their desire to be thin.

On the other-side of the argument, Pope Jr, Gruber, Choi, Olivardia, and Phillips (1997) make a case for muscle dysmorphia not being an eating disorder. Therefore, making it a BDD. Pope Jr, Gruber, Choi, Olivardia, and Phillips (1997) agree that muscle dysmorphia resembles typical eating disorders in a lot of ways. They both have an obsession with perceived bodily defects, abnormal eating habits, and other similar characteristics. However, they point out that when it comes to eating disorders like anorexia, people are primarily focused on how fat they are and how to deal with that perception.

Therefore, Pope Jr, Gruber, Choi, Olivardia, and Phillips (1997) claim that anorexic’s and bulimic’s develop pathological issues with eating first, with exercise being secondary, should that develop at all. But with muscle dysmorphia, they argue they develop concerns over achieving greater muscularity, with the primary focus being on exercise, with their secondary focus being on diet, which is to help with the primary goal.

Although people with muscle dysmorphia might show other forms of BDD regarding a certain body part (Pope Jr, Gruber, Choi, Olivardia, and Phillips, 1997), the preoccupation with needing to be large and muscular (or lean and muscular) makes it its own distinct BDD subset. Thus, they’re not the same condition and shouldn’t be treated as such. But there’s obviously is a lot of overlap.

Although this study has a small sample size, it is supported by another study, adding weight to their results. Pope et al. (2005) wanted to explore if muscle dysmorphia was a form of BDD by reviewing the histories of 63 male participants. They compared those with BDD without muscle dysmorphia with those who only had muscle dysmorphia. The results showed that of the 14 men with just muscle dysmorphia; they resembled the other 49 men with BDD. The participants overlapped on BDD severity, demographic features, delusional views of their bodies, and the number of non-muscle-related body parts of concern.

Furthermore, Pope et al. (2005) study found that men with muscle dysmorphia were at greater risk than those with just BDD. The study highlighted that they were more likely to have a poor quality of life, attempt suicide, engage in several compulsive behaviours, and have a prevalence for substance abuse, especially anabolic-androgenic steroid abuse.

Because of those increased risks, in a clinical setting, it would be advisable for anyone doing an assessment of men for a suspected eating disorder or BDD to also inquire about muscle dysmorphia (Pope et al., 2005). To not do so might put clients at risk of harm, simply because they didn’t ask a couple of extra questions during their assessment.

Interestingly, some people with muscle dysmorphia are aware that they are muscular, but for some reason they’re not reassured by this fact (Pope Jr, Gruber, Choi, Olivardia, and Phillips, 1997). That’s likely because, as with BDD, muscle dysmorphia often comes down to low self-esteem. If you would like to learn more about how to improve your self-esteem, then check out my pervious article on the topic by clicking here.

What Is Muscle Dysmorphia (Bigorexia)?

Now that we’ve discussed if muscle dysmorphia is a BDD or an eating disorder, we can now properly define it. Pope Jr, Gruber, Choi, Olivardia, and Phillips (1997) provided a great way to describe muscle dysmorphia, which is as follows.

Typically, people with (BDD) are concerned with a specific aspect of their body, such as their nose, skin, or face. But people with muscle dysmorphia are pathologically obsessed with their body as a whole. Being preoccupied with not being big or muscular enough. This can cause sufferers to be consumed by weightlifting and other related activities, which can cause significant distress when their bodies are seen. This can lead to anabolic steroid abuse and addiction as they seek to bulk up. It should also be noted that sometimes, this disorder can mean muscular and lean, especially for women. Because, although muscle dysmorphia is primarily a male disorder (Mosley, 2009), it can affect women, too.

Or simply put, muscle dysmorphia is a form of BDD with a focus on muscularity (Pope et al., 2005). One key thing to remember is that devotion to a sport or bodybuilding is different to muscle dysmorphia, where this dedication could lead to them turning down other opportunities in much the same way. What makes muscle dysmorphia a disorder is the overwhelming distress and dissatisfaction with their bodies’ musculature.

According to Fortes, Ferreira, Carvalho, and Miranda (2017), there is an early warning sign for muscle dysmorphia, and that’s body checking. Body checking can appear as comparing your body to another person’s body, checking your muscle size in the mirror, pinching your muscles, and seeking others to confirm the hardness and size of your muscles. If you’ve noticed an increase in this kind of behaviour, then you could be at risk of developing bigorexia.

Some of the other regular signs, according to Pope Jr, Gruber, Choi, Olivardia, and Phillips (1997), are: 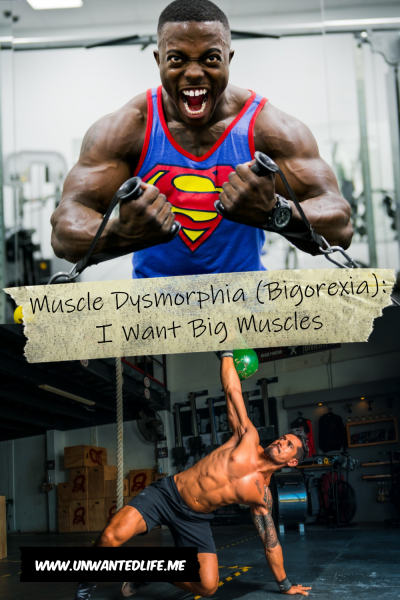 For me, I cover all aspects of my body as much as possible. I always wear a long sleeve T-shirt or something long sleeve to hide my arms, not because of the scars, but because I don’t want people to think I have small weak arms. I’m always in baggy clothes, especially baggy jeans, because baggy jeans reduce the chance the wind will blow them against my legs, showing them as being small like they can with trousers. On top of that, I only wear three quarter length jean shorts to hide my legs. No matter the weather, I’ll be dressed like this, and I’ll also be in all black. Which isn’t easy in the summer.

However, although I want to bulk up and have bigger muscles, I lack the drive and the health to make that happen. Hopefully, my impending eating disorders assessment will help distinguish if I have BDD or BDD and muscle dysmorphia, as well as my eating disorder. Do any of these signs ring true for you?

As always, leave your feedback in the comments section below. Also, feel free to share your experiences with bigorexia, wanting bigger muscles, and BDD in the comments section below as well. If you want to stay up-to-date with my blog, then sign up for my newsletter below. Alternatively, get push notifications for new posts by clicking the red bell icon in the bottom left corner.