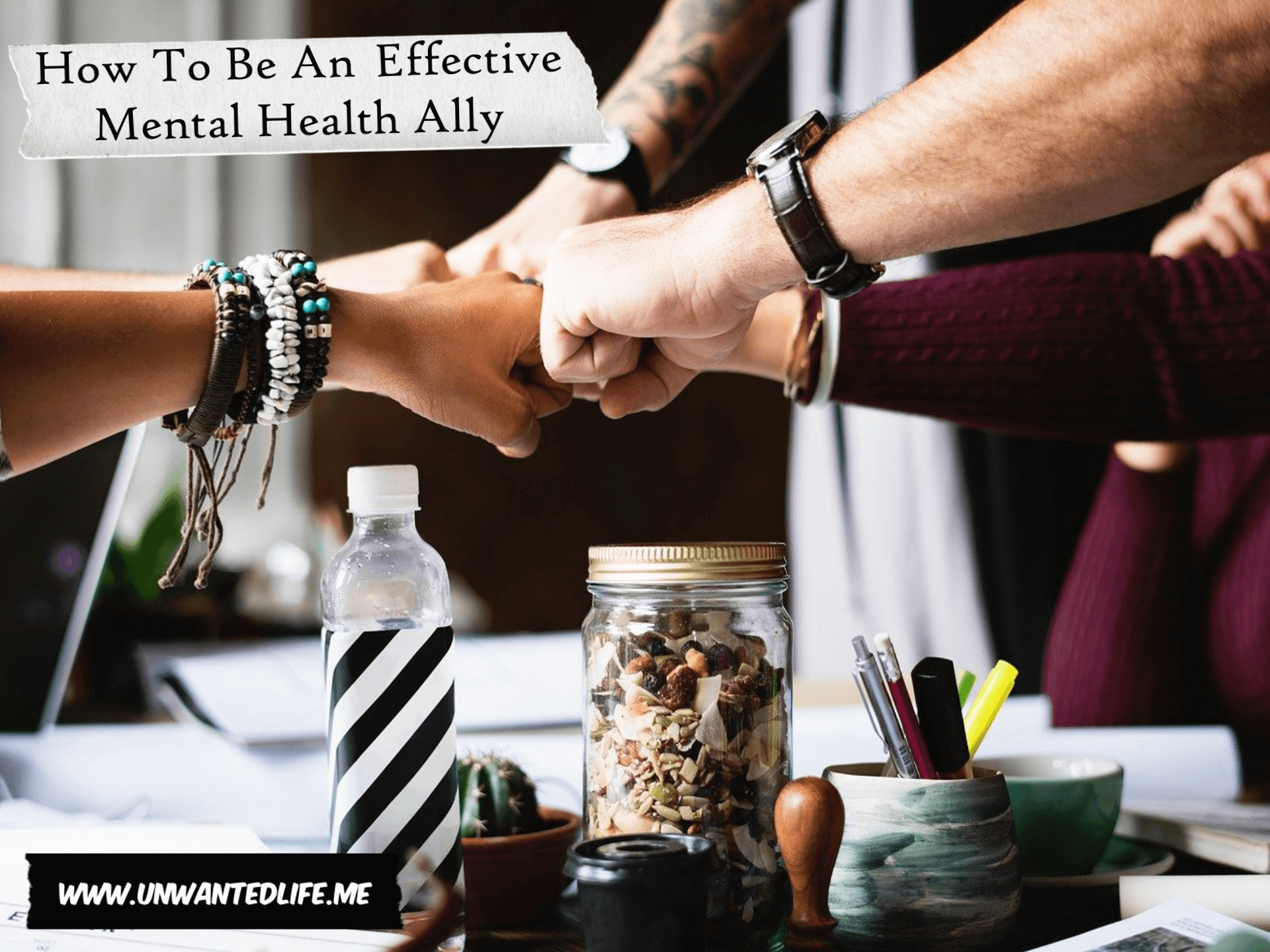 Contents show
What Is An Ally?
Privileges And Being An Ally
Allyship Vs White Saviour
False Allyship
Microallyship
How To Be An Affective Mental Health Ally
Closing Statement

My partner told me about an allyship training they’d had at work, as their workplace sort to improve their equality mandate. Thus, I asked my partner to share some of the information with me so I could look further into it. The result of that was this article on becoming an ally, which borrows and adapts information from Frame Shift Consulting. So credit where credits due. It also seemed like a good follow-up to my last article for the Ask Twice campaign.

What Is An Ally?

First, let’s quickly define what we mean by an ally in this context. In a nutshell, being an ally is to use what privileged status you have to support those who need it. A good example of this comes from an article in The Independent, whereby a Muslim woman with her siblings was subjected to verbally Islamophobic abuse on the Metro in Newcastle, but fellow white and non-Muslim travellers came to their aid. Although it should be noted that this isn’t a typical way to be an ally to someone, it’s just a good story of where a community pushed back against hate.

Privileges And Being An Ally

Ok, before we start, let’s first get something out of the way. Being privileged isn’t necessarily a bad thing. It’s how you use that privilege that is often the problem. You can either use it to help better your fellow people or not.

Being aware of your power and privilege will allow you to recognise the best way(s) you can become a true ally. That’s because it can often be hard to recognise or accept that you have a privileged status, especially if you don’t feel like life has treated you that was, as evidenced by the Brexit vote.

The more sources of privilege you belong to, the fewer struggles you’re likely to have experienced in life. But that’s not to say that you will be completely without struggles, just that such things as just being born black aren’t one of them. And trust me, being born black in an overwhelmingly white area can cause that person a lot of damage. It did me.

I benefited very little from this set of privileges. I may have been male, which had some benefits, but I was also black, which negated a lot of, but not all, the privileges of being male. Being cis and straight also avoided additional social problems being heaped on me, at a time where I was suicidal at primary school simply for being in the wrong part of the country and black.

Other sources of privilege

These are separated from the above list as these privileges you can earn yourself rather than being trusted on you by circumstances.

An example of how falling into one of the second set of privileges can be used to be an ally is if you’re in a leadership role or high enough in the hierarchy, then it’s easier for you to fight for changes or to simply implement the required changes yourself.

I am lucky to fall into the educated privilege, after completing an undergraduate and postgraduate degree. But again, being a black male can often still override this fact, simply because of how I look and people’s biases.

Being a marginalised person requires only to exist, but to be an ally takes action to oppose oppression, discrimination, and prejudice. Furthermore, much like me, in some situations, you may be the person in a position of privilege, while in others you might be the person being marginalised. 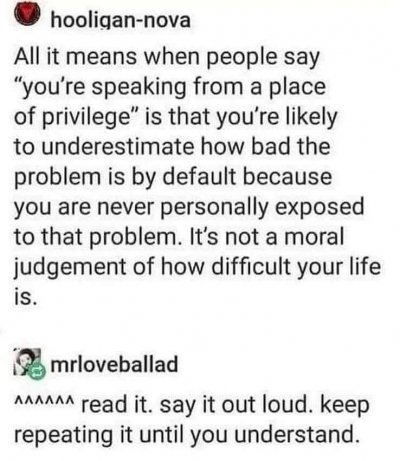 So ask yourself, what could you do with your privileged position to support those that needed it?

The fundamental difference between allyship and being a white saviour is motive. If you’re looking to help people who you look down upon, think are childlike, or somehow incapable of knowing what to do for themselves, then you might be suffering from a White saviour complex.

Due to the systematic oppression of minority ethnic groups, the power and resources are hoarded by the majority ethnic group, which in the case of the US, UK, and the EU, is white people. A White saviour doesn’t seek to address that disparity. They instead want to retain that advantage while using it to manipulate the minority groups to stroke their ego.

Unfortunately, a lot of charity work is based on using the white saviour paradigm rather than supporting communities to help them to be able to flourish on their own. The whole, ‘give a man a fish…’ argument.

There are other ways to be a bad ally, which aren’t exclusively a white people issue. Some people can pretend to be allies to benefit themselves, rather than the group they’re pretending to be an ally for.

They can do this by:

Neha Batra coined the term microallyship, which is about the small daily things you can do to grow as a person and to become a better ally. The ways you can practise tiny daily allyship is to do:

How To Be An Affective Mental Health Ally

In regards to ‘volunteer’, that could be anything from offering support to actively volunteering for a mental health organisation or event. You could also sign up to take part in mental health studies. I’m currently taking part in a longitudinal study on the effects coronavirus has on mental health, filling in 15 minutes questionnaires every 2-4 weeks since March.

When it comes to ‘educate’ you can achieve this by reading articles, studies, blog posts, visiting mental health sites, subscribing to blogs, and watching documentaries.

Lastly, ‘ask’ which seems pretty self-explanatory, and that’s to ask questions and actively listen to the replies. If you don’t understand what someone with mental health issues is going through, asking them (give them the option to not talk about it when you do) will allow you to understand their situation. Furthermore, people also will require different types of help and support, and the only way you’ll know how to help them get that is to ask them.

When you hear people make disparaging comments about mental health or people with mental health issues, challenge the comments, but do so safely, and try to do it in a way that doesn’t make them feel defensive if possible. For tips on how that could be done, check out: The Hard Truth About Eating The Criticism Sandwich.

Pick your battles, so to speak, and spend your time and effort on talking to those that are open to change. My mum isn’t willing to change, if anything, she’s only got more bigoted over the years, and it seems YouTube is largely to blame for that. 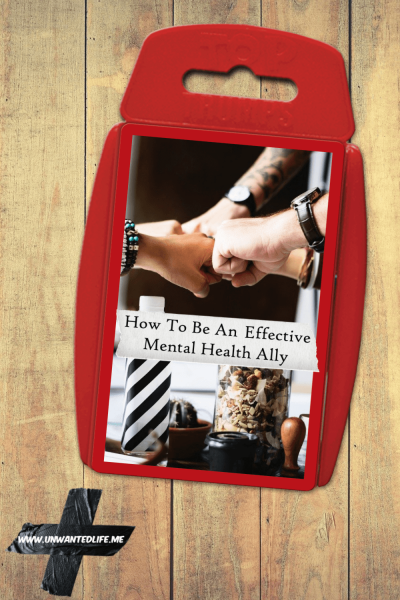 Donating to worthy causes is a simple way to help, which can be done by setting up a monthly donation to organisations like Mind.

People who are oppressed and marginalised often have businesses that could benefit from your support. Why not buy from them rather than from businesses like Amazon who don’t pay taxes, treat their staff as expendable, and are owned by the richest person in the world. He doesn’t need your money.

Another simple method that can be used is to check petition (38 Degrees, Sum of Us, Change, etc.) and government sites (UK Parliament) for causes to support. Or better yet, you could start your own petition using sites like this.

Pretty self-explanatory, when you’re in a place of privilege, acknowledge it. My partner does that a lot about their circumstances, however, they often take it too far and turn it into a way to also put themselves down. Putting yourself down due to being privileged isn’t the point, it’s to be aware and acknowledging your privilege(s).

Sometimes we just don’t know what we should do, so we end up doing nothing at all, but that’s not being an ally. If you’re not sure what to do, ask.

There are a lot of statements people often make without thinking that can cause a lot of harm, which I covered in a previous article. The gist of that article is that it’s better to listen than to make assumptions, especially if you’ve never experienced mental health problems yourself.

Thus, the first step to being an ally is when talking to someone who could use an ally, to avoid statements like:

It’s all in your head – Yeah, no sh*t sherlock, but that doesn’t make it any less of a problem.

I just wish one time my mum would avoid using such statements when she talks to me because she’s never been an ally, which if you’ve read ‘Avoidance: Toxic Family And Protecting Your Wellbeing‘ or ‘Black Lives Matter: A Letter To My Mum‘ you’d be very aware of. Don’t be like my mum.

Safe space often gets a bad rap, but creating a space where people feel free to talk openly is a great way to get difficult conversations started, so important changes can be tackled.

Take time to understand what discrimination is and how it can be an issue. To help you with that, check out my article on discrimination. This will help you in establishing a safe space, avoid doing nothing, and being a friend as a true ally.

To be an ally is a commitment to try and be better. You may make mistakes, and that’s ok, mistakes can be learned from. Don’t be scared off because something seems too complex, it’s the effort to help and the commitment to do better that really matters.

I have some vocabulary I picked up in the 90s that I’m trying my hardest not to use anymore, but still occasionally pops out, but when it does, I verbally correct myself and tell myself off. My commitment to change includes long-ingrained vernacular from my youth that I no longer want to use because I don’t find it acceptable to use it. But like I said, it’s the willingness and effort to try and do better that helps, because people aren’t perfect and change doesn’t always happen overnight.

As always, leave your feedback in the comments section below. Also, feel free to share your experiences with needing an ally or being an ally in the comments section below as well. If you want to stay up-to-date with my blog, then sign up for my newsletter below. Alternatively, get push notifications for new articles by clicking the red bell icon in the bottom right corner.

54 thoughts on “How To Be An Effective Mental Health Ally”