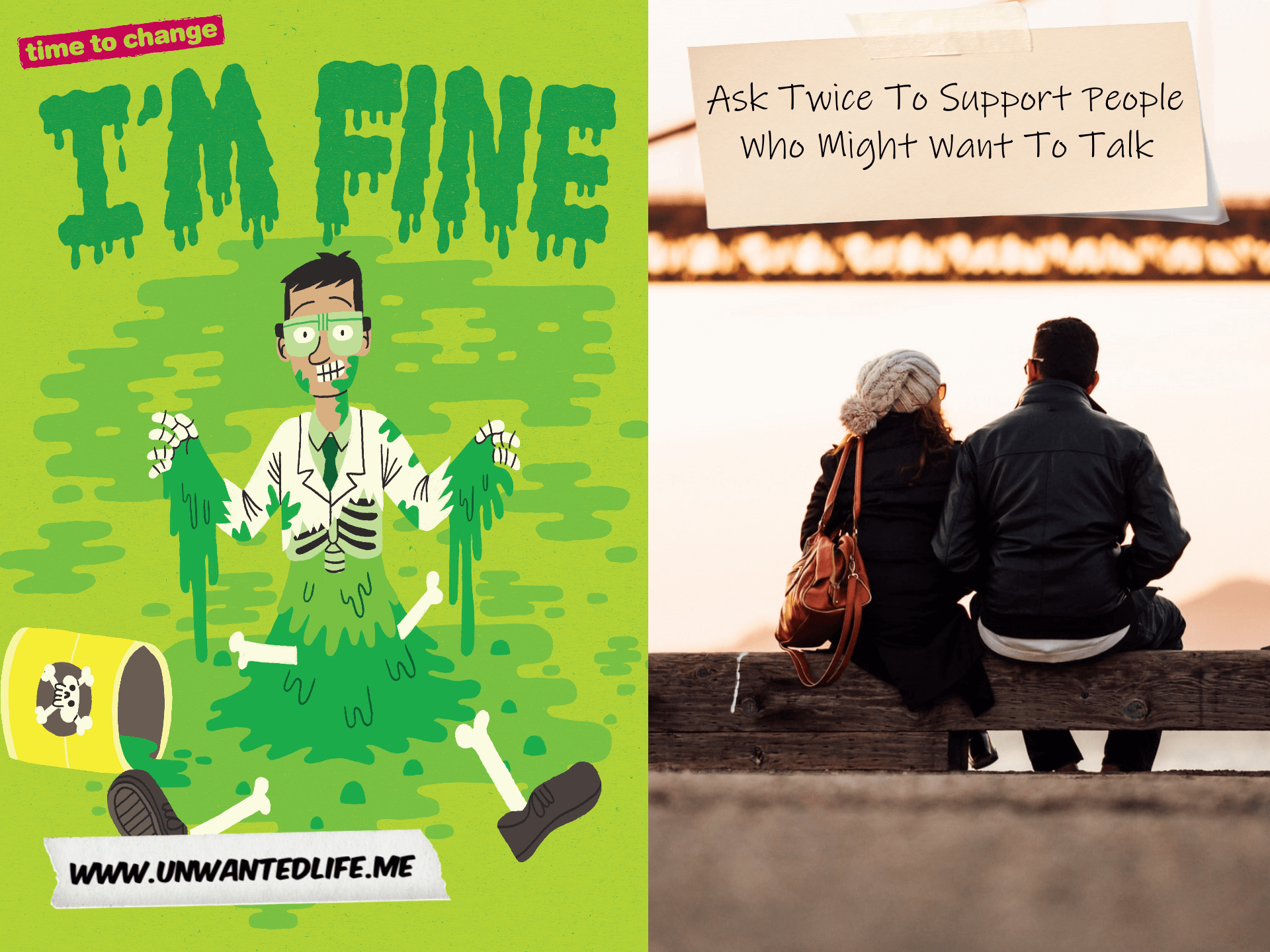 The Ask Twice campaign fronted by Time to Change designed is designed to get men talking about their mental health, because sometimes asking once just isn’t enough. If you’ve read my previous article, ‘Why Do I Say “I’m Fine” When Actually I’m Not?‘ then you’ll know we often lie about how we’re really doing, so asking twice is a way to let men (or anyone) know you’re actually interested in an honest answer.

I became a Time To Change Champion because I wanted to know how I could do more to help reduce the stigma around mental health. In the process of joining this programme and undertaking their training, I became aware that they’re doing their Ask Twice event on the 19th of November, hence writing this article. I created this article in the hope that it’ll inspire you to look into ways of how you can help destigmatize mental health in your life and your local community.

The first thing to be aware of is that if you don’t feel comfortable about people sharing with you what’s honestly going on in their lives, then that’s ok, don’t ask twice. But if you do want to support those around you, then there are a few steps you can take to help you feel more comfortable.

Asking twice is important because people will say “I’m fine” 14 times a week, with only 19% of those who say that actually meaning it (Mental Health Foundation). Because of statistics like this, it’s important to ask twice, as asking twice signals that you’re ready to listen to what they really have to say.

More often than not, most people just need to rant and get things off their chest. But even in situations where this isn’t the case, just talking about it and not feeling judged for it is enough to start them on the path to getting more appropriate support. The purpose of asking twice is to normalise talking about mental health and to make it normal to seek help.

About a year ago, I wrote about how I was there for a friend who opened up about their current issues and how they were coping, and I’m glad I was. It wasn’t awkward at all. But it was good to know they feel safe enough to talk to me about it.

The basic premise of the asking twice campaign is that if you notice that your mate is acting differently, then you ask twice.

This is important, and there’s no shame if you can’t, in which case just don’t ask twice. However, if you are going to ask twice to get a meaningful conversation about how someone is doing, you need to be prepared. Due to the stigma that surrounds mental health and other factors, it can be embarrassing and exposing to talk openly about what’s really going on with your thoughts and feelings, especially if they’re disturbing.

Don’t treat it like a joke and certainly don’t laugh. This is especially true if a man is sharing information about being the victim of abuse by a woman. Men are less likely to report abuse or rape because of society’s notion that if you’re a man, then you can defend yourself. Therefore, treat this as a serious conversation, because this will be very real to them.

Peppering your listening with some simple reflections will help the conversation flow. It doesn’t take much, just simple comments like: “that sounds difficult” and “I can understand why you’re having a hard time”.

Use positive and relaxed body language. If you look stiff and have defensive body language, like having your arms crossed, then you’ll be sending out a message that you’re not comfortable being in this conversation.

If you’re feeling up to it, then you could also ask some open-ended questions. But if you’re feeling like it might be prying, then you can add a modifier to the end of your questions (“it’s ok if you don’t’ want to answer”), giving them the option to not answer without any pressure being added.

Examples of some of the open-ended questions you could ask: 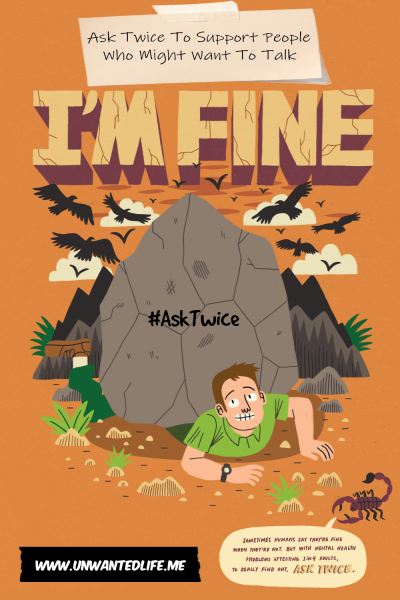 Don’t try and fix it

You’re not the handy person here to fix a leaky roof or a broken table leg, you don’t need to fix the person. I know that’s hard, as I’m often driven to try to fix a problem when it’s presented to me. But this is a conversation, not a counselling session, and change doesn’t happen overnight. It’s not your job to make their mental health problem go away, even if you are asking twice to get a conversation going about their mental health.

Just treat this conversation like what it is, a conversation. Listening and asking the occasional open-ended questions is enough. Just be normal together.

If someone opens up to you about something that you don’t really know anything about, then you may want to learn more about it so you can be more supportive. There are a lot of personal stories out there you could read, or, if they’ve given you a specific diagnosis, then you could look that up on a trusted website, like the NHS, which has a list of conditions they have information on.

In my experience, my partner often has to ask me twice, if not more, about if I’m alright when it comes to my mental health. It also helps if they add their observation when they do ask.

I’m not one to share my mental health dips with anyone. I’m so used to going it alone and figuring out my own problems because professional help has never actually helped me. But weirdly, at the same time, I have no problem talking about my mental health problems and the history of those problems. It seems to be the here and now I don’t like sharing as I don’t want to worry people who don’t understand that my ups and downs and constant suicidal ideation are just normal for me.

I also often ask twice myself if I think someone I know isn’t their usual self, even though I hold back on my own current issues. So let’s spread the message, it’s time to change how we engage with people, it’s time to talk, and time we all started to ask twice.

As always, leave your feedback in the comments section below. Also, feel free to share your experiences with asking twice and talking about mental health with friends and family in the comments section below as well. If you want to stay up-to-date with my blog, then sign up for my newsletter below. Alternatively, get push notifications for new articles by clicking the red bell icon in the bottom right corner.