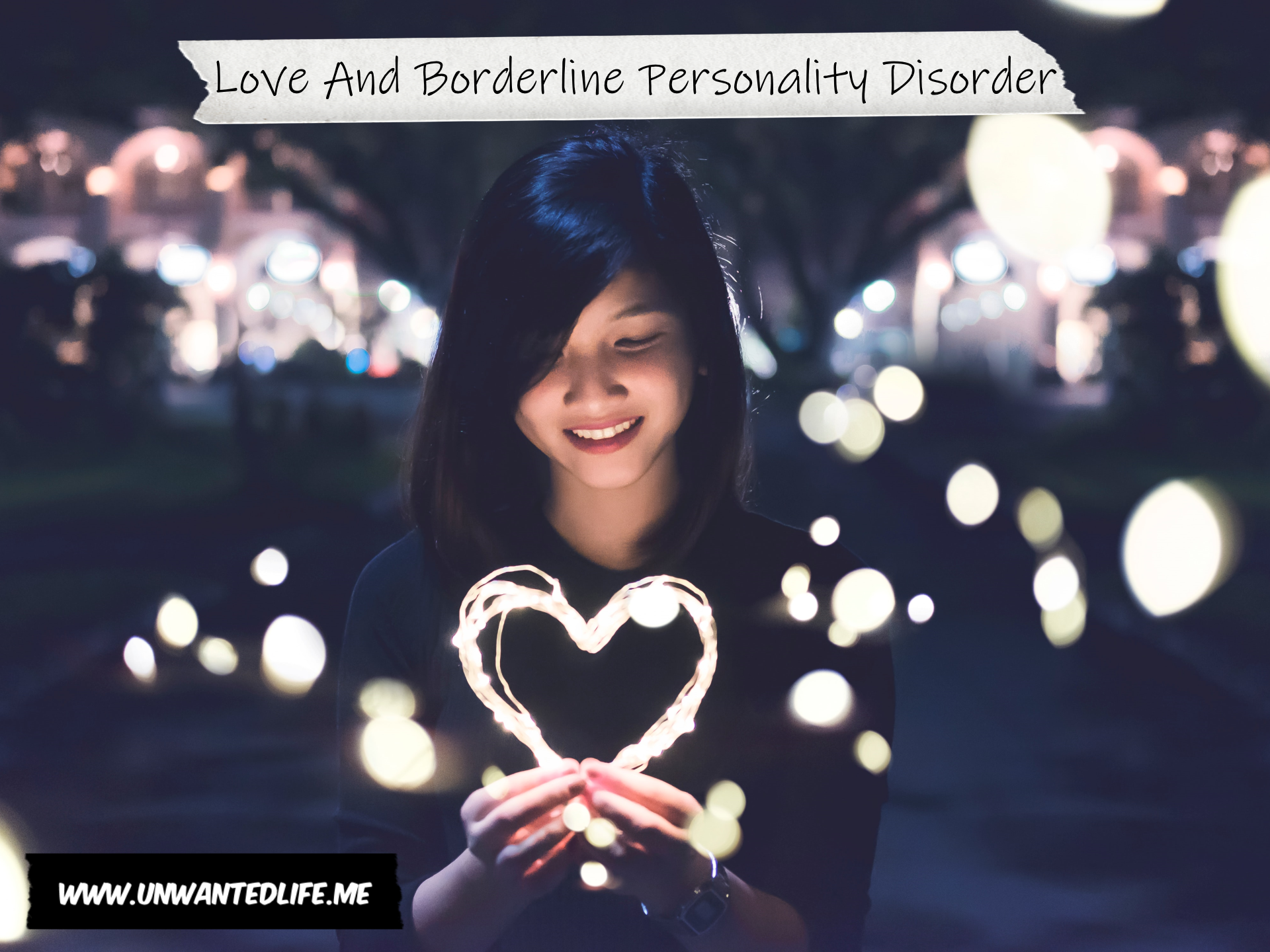 As I wrote in my previous article, ‘What Is Romantic Love?‘ and in some of my other articles (Date Night: The Difficulties Of Meeting My Partner and Unexpected Plans: Partner Wants To Meet A Week Early), I have great difficulties with relationships. These difficulties may be the cause of my borderline personality disorder or a result of it. Thus, I thought I would take a look at the love and relationship issues of sufferers of borderline personality disorder.

According to the Diagnostic and Statistical Manual of Mental Disorders (DSM-5), the main relationship characteristics of borderline personality disorder are intense, unstable, and conflicted personal relationships.

One of the key characteristics of borderline personality disorder is the fear of rejection. People who suffer from borderline personality disorder are meant to be in constant fear of rejection, which can result in the sufferer leaving the relationship before their partner has a chance to leave them first, even though their partner might not have such an intention (Cleveland Clinic).

As I’ve talked about in my other posts, especially the previous post (What Is Romantic Love?), my borderline personality disorder has made relationships very difficult. From the times in my life when my emotions were unstable, to the present, where I’m largely emotionally numb all the time. Stable emotionally through the lack of emotions.

My attachment issues were so bad that I eventually just gave up on having relationships. I hate the fact that after two-and-a-half months, my feeling of lustful love would be replaced with not being able to stand the person touching me. This change would come out of nowhere, and there was nothing I could do about it.

I feel lust/love really intensely for the first two-and-a-half months, and then it’s just gone. Due to this, I often ask what love is and look into finding out what love is and how it should make me feel. All because I really don’t know if I’ve ever felt it. I also wonder if my kind of love is just different from everyone else’s.

I don’t think my borderline personality disorder is rooted in any kind of fear of losing someone, as my attachment issues make it difficult to form attachments with people in the first place. I’ve never felt homesick and I’ve never missed anyone.

However, to avoid hurting people, I just stopped having relationships. I couldn’t cope with the pain I’d cause the people I would break up with when I broke up with them.

Somehow I’m in a relationship that’s been on and off over the last decade, and we’ve been together properly for two years or more now. But that’s only worked due to a lot of long conversations about my relationship and borderline personality disorder problems. We’ve established good personal boundaries, and my partner accepts that I’ll have repeated phrases where their mere touch will make me want to pull away.

We’ve agreed we wouldn’t live together and instead live nearby. That way we’re not under each other’s feet all the time and my issues will come less into play. We still message each other every day, but only meet once a fortnight over a weekend, and occasionally, a few other times for lunch and stuff. It’s our weird way of getting around my issues, and somehow it works for others. Mainly because my partner is incredibly understanding and also loves their space.

According to Very Well Mind, some borderline personality disorder sufferers can suddenly switch between feeling smothered and fearful of intimacy, which leads them to withdraw from relationships. This means there’s a constant back-and-forth between wanting and expecting love and attention to suddenly withdrawing and wanting to isolate themselves.

This would kind of fit my issues better than my having a simple fear of rejection. Although I still don’t think I have a fear of rejection. But the switching between wanting to be loved and having an overwhelming need to be away from that same person does better account for my problems, looking back at them.

Attachment problems are probably the cause of borderline personality disorder sufferers having a fear of rejection in the first place. But that might depend on your attachment type.

Agrawal, Gunderson, Holmes, and Lyons-Ruth (2004) findings aren’t that much of a surprise, as attachment problems are a big part of borderline personality disorder. Thus, attachment and rejection go hand-in-hand.

According to Psych Central, it’s commonly believed that most people with borderline personality disorder are codependent and find other codependent people to match up with in order to help them.

Due to my borderline personality disorder, I often fear that my current relationship is codependent (What Is Domestic Abuse?). So much so that I’ve asked my partner a few times to check that it’s not. They don’t believe we are, so I have no reason to doubt their opinion on it. I guess we just balance each other out, rather than it being a co-dependency issue. But I hope we’re not really two different codependent people that have found each other. 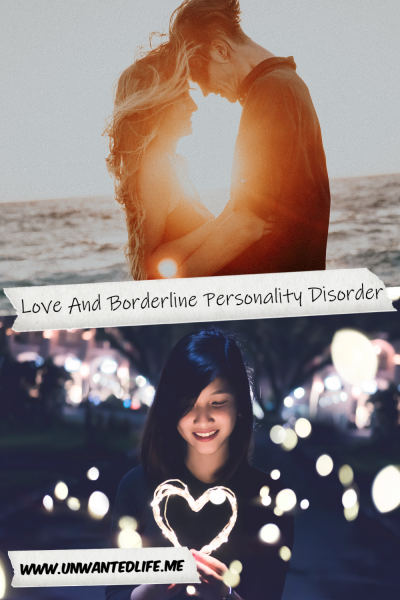 One of the more darker and common traits of borderline personality disorder are issues around being suicidal (Cleveland Clinic). I for one know I’ve had issues around thinking about dark thoughts and suicide almost as long as I’ve been alive (Suicidal Child #ChildrensMentalHealthWeek).

My issues with this do put a bit of a strain on my relationship because my partner wants me to be more open about my suicidal thoughts. The problem is, I have them all the time, and that’s fine for me. I’m used to it. It only really matters when I become completely consumed by it. But even then I don’t tell my partner it’s happening, but I might do once that suicidal phase has passed.

If I tell my partner afterwards, then they get a little upset about not saying anything whilst it’s happening. But it’s not like they could do anything to help when I’m in that state, so I don’t see the point in burdening them with it when it’s happening. But because my partner also gets a bit upset after the fact, I also don’t really want to tell them afterwards either, because of the hassle.

But it is possible. It helps if you have some very honest conversations about how your borderline personality disorder affects you, your relationships, your needs, your issues, and your partner’s needs and wants. Then you need to work out boundaries to keep the relationship healthy.

Another way you could help maintain a relationship with someone who has borderline personality disorder is to acknowledge the sufferer’s emotions rather than dismissing them, and to keep your emotions in check when the sufferer is struggling with their emotions (CBS News).

If you have any tips for being in a relationship with someone with borderline personality disorder, then let us know in the comments below.

As always, leave your feedback in the comments section below. Also, feel free to share your experiences of mental health, borderline personality disorder, relationships, and love in the comments section below as well. If you want to stay up-to-date with my blog, then sign up for my newsletter below. Alternatively, get push notifications for new articles by clicking the red bell icon in the bottom right corner.