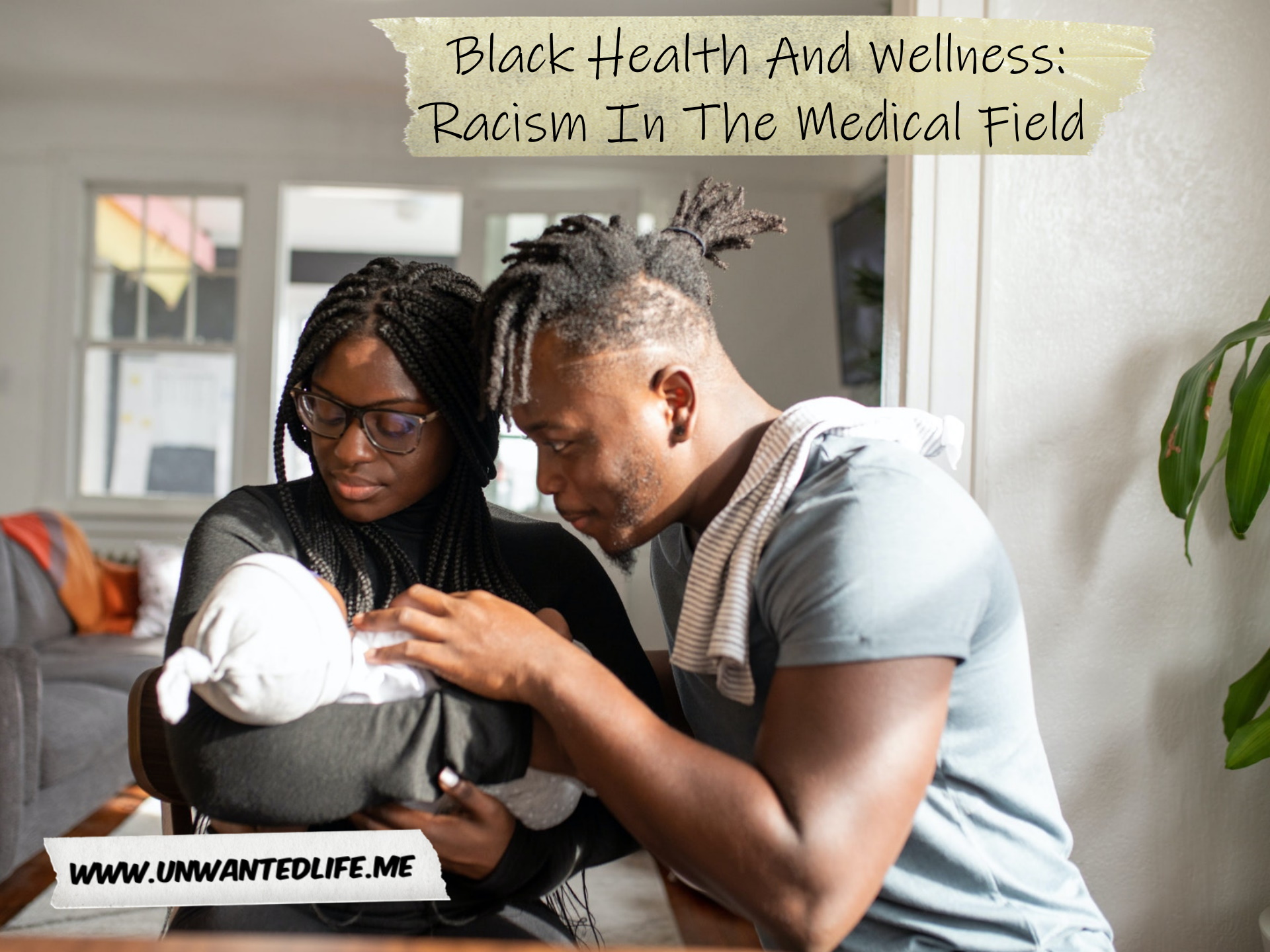 I was first inspired to write this article after my long, long, long struggle to get support for my eating disorder. Being a big Black guy, my issues were constantly being ignored and dismissed. However, the idea for this article just sat in my rough draft ideas for ages. That is, until I saw the theme of America’s Black History Month, Black health and wellness, which you can find more information on by clicking here.

Thus, I thought now might be a good time to write and publish my article on Black health and wellness and its links it to racism in medicine. I know, it’s not quite on the theme of Black history month, but it’s something that needs to be talked about.

Black Health And Wellness: Black Women And The Pregnancy Disparity

I recently came across a bite-sized story on IdeaSpies of an article by Huffington Post that also helped rekindle my desire to cover this topic as a Black man. That’s because whenever you look at posters or information on health conditions, they always feature photo’s and illustrations of White people, and that’s a problem.

The problem isn’t just about representation, it’s also dangerous. People have died because medical professionals don’t know how to recognise symptoms in people with dark skin. For example, babies with jaundice have a yellow colouring of the skin and eyes, but if you have dark skin, it’ll be very hard to notice yellowing of the skin as a symptom (KidsHealth). And that’s only the start of the problems the White washing of medical training and health textbooks cause.

Chidiebere Sunday Ibe from Ebonyi State, Nigeria, wanted to do something about that and began illustrating Black patients, children, and babies. One such image, a drawing of a Black foetus and mother, went viral on Twitter and TikTok. You can see that image below. 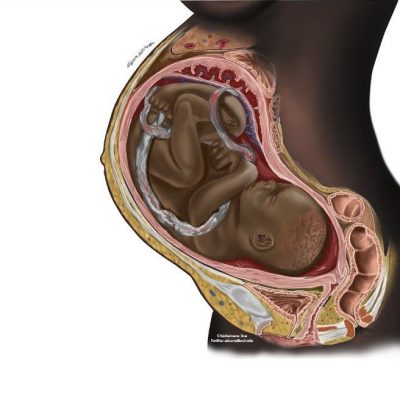 Although the UK has a long way to go with maternity care for Black women, the US isn’t doing much better. According to the Centers for Disease Control and Prevention (CDC), Black women are three times more likely to die from a pregnancy-related cause than then White counterparts. The CDC lists several factors involved in this, with structural racism and implicit bias being the ones that speak loudest.

It should be noted that this appears to be an improvement on the America’s pervious figures for Black women and pregnancy-related death when compare to their White counterparts. Previously, the figure was between 2-6 times more likely to die, with certain states doing worse than others (CDC, 1999). Here’s looking at you, Texas.

The issues for Black women and pregnancy don’t just happen during giving birth and the year post childbirth. The Lancet analysed the data of 4.6 million pregnancies across seven countries and found that the risk of miscarriage for Black women is 43% higher than their White counterparts (BBC). However, the risk of miscarriage could be reduced if medical professionals were trained to understand health of Black and other ethnic groups, rather than being taught only about it from a White perspective. 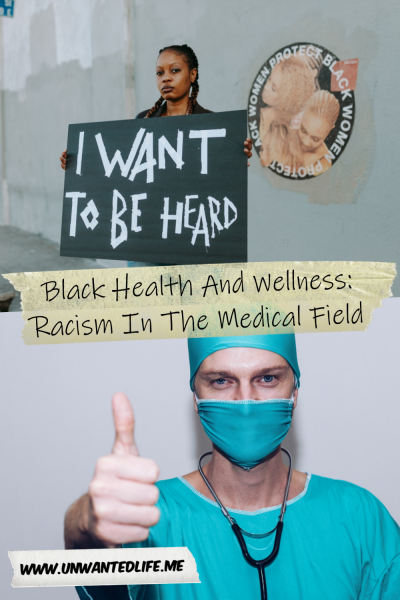 There’s a long history of giving the wrong doses of medication to Black people that is rooted in racism, rather than anything medical. It’s the same implicit bias that kills pregnant Black women that rears its ugly head again with medications.

There is a myth that Black people don’t feel pain as much as their White counterparts do. Meaning, throughout history, Black people, especially Black women in childbirth, were not given enough pain medication or weren’t given any. Because of implicit bias, Black people still aren’t being listened to (Today).

One of the most horrifying examples of this ridiculous belief comes from James Marion Sims, the so-called ‘Father of Modern Gynaecology’. Because of this ludicrous belief around pain, this physician conducted medical research on enslaved Black women without anaesthesia.

A study by Hoffman, Trawalter, Axt, and Oliver (2016) confirmed the Black pain myth in America. They also found that first, second, and third-year medical student participants who believed this myth made less accurate treatment recommendations. Which is a worrying finding for the safety of Black people seeking medical care.

To add insult to injury, according to Singhal, Tien, and Hsia (2016), there is also a significant racial-ethnic disparity in opioid prescription and administration in US emergency departments. Black people are half as likely to be prescribed opioid medicines. The reason being that the unconscious biases these medical professionals have means they think Black people are more likely to fake pain to feed their substance dependency.

The reality is, the rates of “illicit” drug use aren’t significantly different between Blacks and their White counterparts (Meghani, Byun, and Gallagher, 2012), but they’re treated as if there is.

Other Black Health And Wellness Myths That Still Exist

Lindsay Tweeted an image from a book called ‘Nursing: A Concept-Based Approach to Learning’ which contained some unbelievably outdated views about other ethnic groups. The book in question was published in 2017!

this page is from a medical textbook that was published in wait for it…2017. pic.twitter.com/R5DV7ZqxJM

As stated at the start of the article, people Black people’s health issues aren’t always as obvious as their White counterparts, as with other ethnic groups too. When you add this to the Black myth’s medical professionals can have, it creates a two-tier healthcare system.

Implicit bias in healthcare professionals is a well-established fact, and the root cause of most issues when it comes to Black Health and Wellness (FitzGerald and Hurst, 2017). Thus, the first step we all need to take is to train all the medical professionals about implicit bias. A key part of this is teaching children, teens, and young adults about not only the biases we call have, but about racial inequality as well, such as teaching critical race theory in the US. Awareness is the key to overcoming such problems.

We need to move away from the longstanding medical concept that the White male model is the default for all of us. This will not only save the lives and Black people and other ethnic groups but also White women. That’s because the doses required for medication can be different between the sexes.

Furthermore, until the above changes can bear fruit, we need to take steps to help us now. For example, we need to create clinical guidelines, standardised checklists, and system-wide protocols that remove medical professionals from deciding based on their implicit bias to avoid it affecting patient care (AAMC).

Another option is to keep abortions safe and legal, which can save countless lives that might be lost to pregnancy complications. Stevenson‘s (2021) research found that banning abortion in America would lead to a 21% increase in the number of pregnancy-related deaths for all women, but a 33% increase among Black women, compared with rates for 2017.

We need to remember that even though pain is subjective, which is why patients are asked to rate their pain on a scale, this subjective nature isn’t rooted in our ethnic backgrounds. It’s because of individual differences.

In this day and age, it boggles the mind that health professionals still have the same kinds of outdated views of Black people’s biology as they did during the slave trade. But unfortunately, that’s still our reality as the world continues to deal with its long ingrained institutional racism.

The wider implications of Black health and wellness and the Black myths that still exist don’t just stop with Black people. These can affect anyone who isn’t White. If medical professionals are only trained to recognise symptoms in White people, then anyone with skin that isn’t white could find their health at risk.

We can do better, and we will do better. All that’s needed is for policies and changes to be implemented and we’ll all be better off for it. Because a medical field that conducts its research on participants who aren’t just White men, and train our medical professionals accordingly, will create a workforce who instinctively knows that illnesses can present in many ways. Rather than having a medical field that only looks for the typical ways they present in White people, as we still do today.

As always, leave your feedback in the comments section below. Also, please share your experiences with Black health, wellness myths, or general racism in medicine in the comments section below as well. Don’t forget, if you want to stay up-to-date with my blog, then sign up for my newsletter below. Alternatively, get push notifications for new articles by clicking the red bell icon in the bottom right corner.

49 thoughts on “Black Health And Wellness: Racism In The Medical Field”