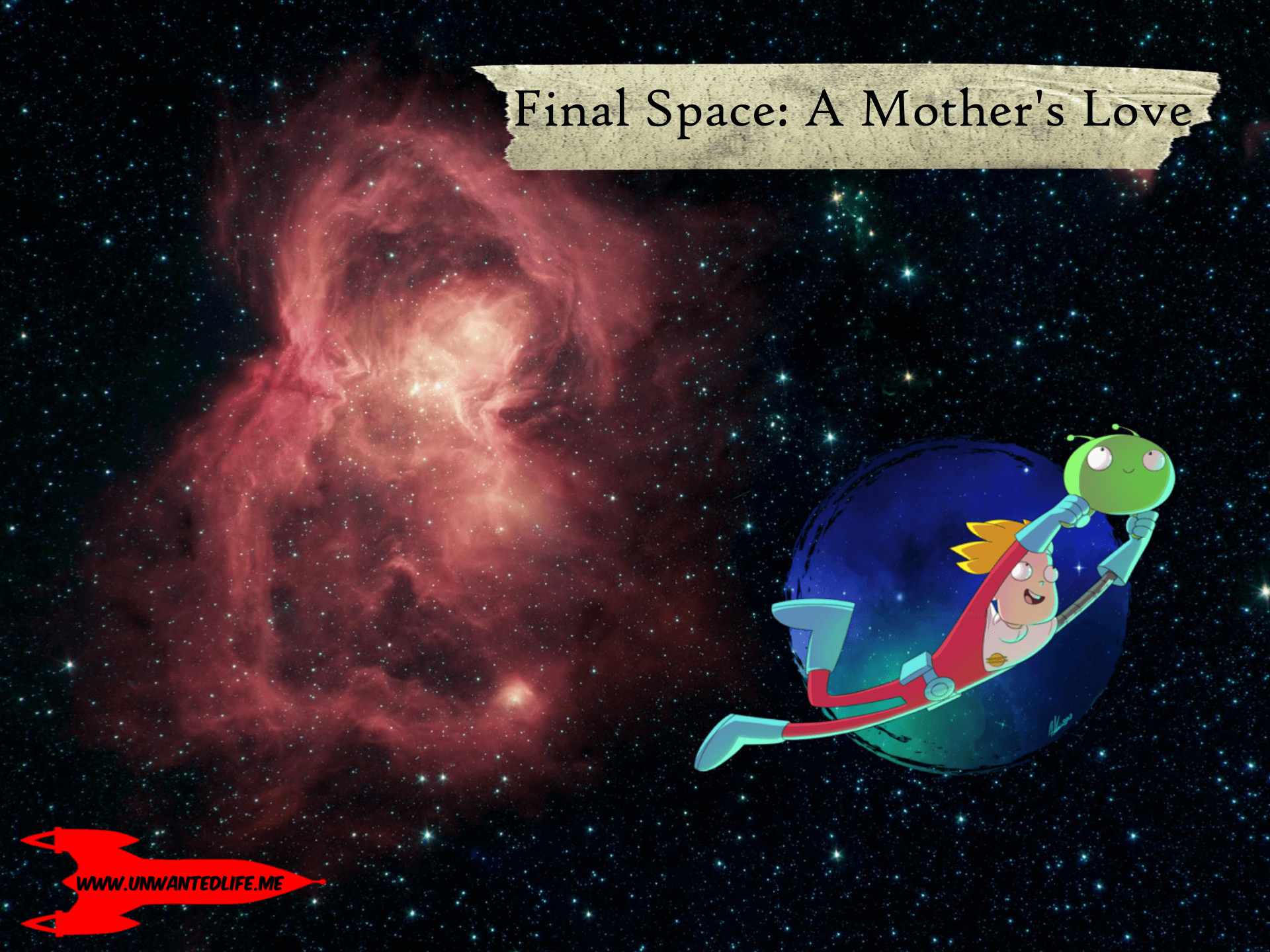 I first got the inspiration for writing my previous articles, ‘Words That Stay With You Forever‘, after watching an episode of Final Space. Although it wasn’t until I wrote ‘Terror Management Theory‘ that I decided to actually follow through and write it. Upon writing ‘Words That Stay With You Forever‘, I decided to create this article about Final Space, as I love the show, and thought it would be suited to coincide with Mother’s Day in the US.

But before we get started about the Mother’s Love part of this article, let’s first let me quickly sum up the show, in case you’ve not seen Final Space before.

The show starts by following Gary in his final days of working off a five-year prison sentence on the Galaxy One. Where the scene is set to follow the boisterous and inept intergalactic astronaut adventures of Gary Goodspeed and Mooncake, as they try to solve the mystery of “Final Space”.

Gary meets and befriends a creature named Mooncake, who is capable of destroying planets and opening a gateway to a place called Final Space. Due to how powerful Mooncake is, an evil leader known as the Lord Commander wants to capture Mooncake in order to use his power. This puts Gary, Mooncake, and his ragtag crew on a crash course to try and save the universe.

The main plot of Final Space is to find out the secrets of Final Space and to save the universe. However, in addition to that, the show has an important subplot involving Gary’s estranged mother, Sheryl Lightspeed, which comes to the surface as they introduce her in season 2.

Gary’s relationship with his mum (Sheryl) isn’t a good one. His mum used to belong to a rival faction of the Infinity Guard, to which his dad belonged. She was assigned by her superior to seduce John Goodspeed (dad) but ended up falling in love with him and getting pregnant. Everything eventually fell apart when John found out Sheryl was a spy. Then, after John’s death, Gary’s mum completely abandons Gary.

The inspiration for this article, along with a depressive thought about the relationship I have with my mum, was triggered by a scene from series 2 episode 10 of Final Space. Which you can see below as I cut the scene for my readers, so you could see her say, “I wish you were never born.”

My mum said something similar to that to me when I was 14. She told me I’d ruined her life by being born. Which, if you’ve read ‘Terror Management Theory‘ you’d already have been aware of.

I wanted to quit a martial arts class because it hadn’t helped me when I got jumped by three people at school. This experience had really done a number on my state of mind and would be an event I’d struggle with for almost a decade. Although I probably still do suffer from it a little even now.

But my mum, being my mum, was oblivious to my emotional and psychological needs, and thus, when I told her I was going to quit, she turned around, crying, and told me that I’d ruined her life by being born.

Her excuse for saying that was because she wouldn’t get to hang around with the other parents while I attended the class. But if she hadn’t of isolated and pushed everyone away with her religious views (as I mentioned in Terror Management Theory), she would have friends and people that would be willing to spend time with her, instead of relying on this one class to interact with people her own age.

My mum and I don’t have the best relationship, largely due to her lack of empathy, but also because of the bigoted views, views she holds due to her faith. So I’ve never had a familial bond with my mum, I’ve always seen myself as a lodger, rather than her son when I lived with her, and I’ve always explained it to others as such.

I knew my mum meant what she said to me that night because she’s never cared about my emotional and psychological wellbeing. She lacks empathy. But because I’ve lived with her being that way all my life, there was never a parental bond between us to be damaged by that stage, so I didn’t care. As such, when she told me that I “ruined her life by being born”, I simply told her, “it’s not my fault you had unprotected sex”.

Sheryl is a constant thorn in the side of Gary’s attempts to save the universe. All because she loves her Gary’s father, to the point that she is willing to risk everyone and everything else, including Gary, for a chance to bring him back by collecting the dimensional keys.

There’s an interesting dynamic between the characters, and the tension between them is palpable. What’s most striking about their relationship is the way that it doesn’t reach an easy reconciliation. The writers aren’t afraid to explore the more difficult side of broken family relationships and to leave questions unanswered and resolutions hanging. In many ways, the series is about wrestling the evil within just as much as it is about the insurmountable monsters.

Gary wants to connect and believe in his mother, but throughout, his mum shows no interest in their relationship.

At the core of your life, the very people who should be making you feel good about yourself are doing the opposite. It is wrong of your parents to say those things: that is not good parenting, and just because your parents are saying it, doesn’t make it the truth. I’m sorry they are like this, but they must be very unhappy with themselves.

This quote is right on the money. My mum was depressed my entire childhood, and I took the brunt of it when she couldn’t cope; when she snapped. Unfortunately for Gary, he has a worse relationship with his mother than I do, as she clearly doesn’t care if he lives or dies during their encounters throughout the show. She blames Gary, even though he clearly didn’t do anything wrong.

It makes me wonder what kind of attachment issues Gary might have due to us both being told by our mothers that they wished we’d never been born. It was one factor in my development of borderline personality disorder, so I wonder if the show will explore any long-term psychological problems due to this for Gary. It would certainly make for an interesting addition to his character development.

Final Space has a number of family relationships going on, it’s not just Gary and his mother, Sheryl. There’s also an interesting dynamic between Avocato and Gary in season 1, which then leads to a surrogate father relationship between Gary and Avocato‘s son, Little Cato, in season 2, when tragedy strikes.

The Lord Commander, the big bad in the first season, tested the loyalty Avocato and his other generals. He did this by ordering them to kill their firstborn children: Avocato refused. Avocato was stripped of his rank and forced to be a bounty hunter. When the Lord Commander did this, he also took Little Cato hostage to ensure Avocato would obey his orders.

Little Cato was separated from his father for years, due to being held hostage, and longed to be reunited with his father. But the fatherly relationship he wanted with his father, he ended up getting from Gary. Watching the growth of Little Cato and the bond develop between him and Gary made for an interesting second take by the writer on parental figures and family.

Although Gary never got the close relationship he’s been longing for with his mother, he was able to be there for Little Cato, who was looking for a relationship with his father, but which had been denied him. 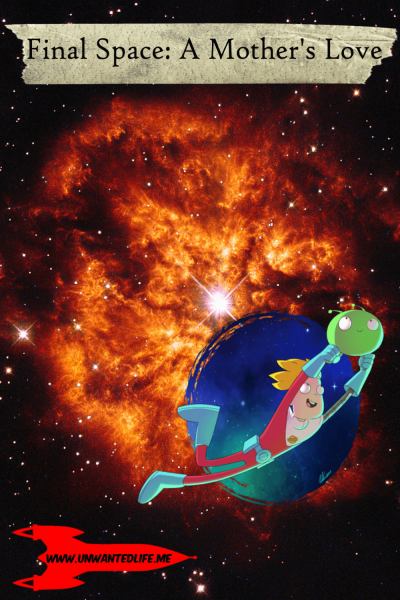 The weird parental relationships didn’t stop there, there was another one thrown into the mix that defined season 2. That relationship involved Clarence and his adopted children, Fox and Ash.

When Final Space returned for season 2, the show picked up with Clarence rescuing Gary, Little Cato, and H.U.E. after finding them floating in space after their battle with the evil forces of the Lord Commander. Saving them came with a catch, however, Clarence declares them his property. This is when we’re introduced to his adopted children, Fox and Ash.

However, all is not well with this adoptive family and new crewmates. Clarence creates a fake holiday, carnivolo, in order to get praise. But when his two children, Ash and Fox, fail to give him the praise he wants, he disowns them. This leads to a situation where Clarence’s true colours get revelled when he allies himself with Sheryl Goodspeed.

I won’t go into too much detail about this dysfunctional adoptive family, as I don’t want to give too much away about season 2, in case you haven’t watched it yet. I believe it’s still available to watch on Netflix.

There’s a lot going on in Final Space that relates to what makes a family, which, for me at least, makes this awesome show even more interesting to watch.

The characters are interesting and funny, as are their efforts to try and save the universe. Most animated shows might have just stuck with the main plot of a group of misfits trying to save the universe, but this show adds an interesting and complex subplot of family dynamics that reminds me of my article ‘What Is Romantic Love?‘. That’s because the concept of unconditional love is explored quite uniquely here. Sheryl will do anything to bring back her lover, Gary’s father, but at the same time, she has no love for her son.

The fact that Gary lost his father at a young age and his mother abandoned him, didn’t stop Gary from being able to form strong bonds with Avocato, and then Little Cato, as well as with Mooncake, is a testament to Gary’s resilience as a person. It also makes for a great show.

I really love Final Space, with its complicated family and relationship dynamics, mixed in with saving the universe and it’s general weirdness to keep you smiling. You can easily go from laughing one second to feeling like your heartstrings are being tugged on. Thus, I’d highly recommend watching this show, which is why I give it:

I can’t wait for season 3 to be released to see what’s next for the crew on Final Space.

As always, leave your feedback in the comments section below. Also, feel free to share your experiences with your parents and the hurtful things they say, as well as your thoughts on the show in the comments section below as well. If you want to stay up-to-date with my blog, then sign up for my newsletter below. Alternatively, get push notifications for new articles by clicking the red bell icon in the bottom right corner.