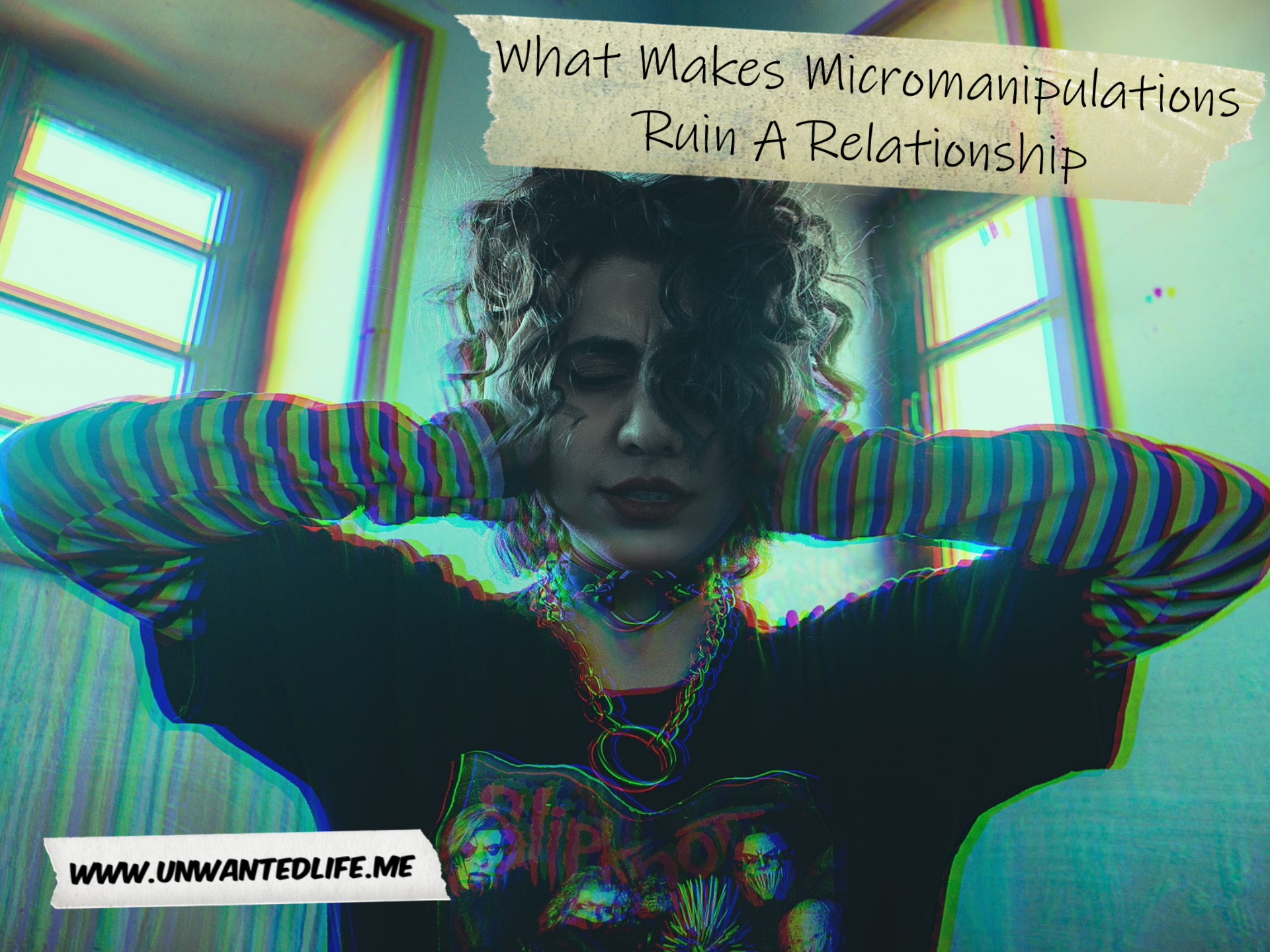 I was inspired to write this article after seeing the below image while mindlessly looking around online. For some reason it struck a cord with me, and then I realised something. The reason my depression suddenly crashed last summer was because of this very thing: micromanipulations. Micromanipulations aren’t just for narcissists, anyone can use these tactics. 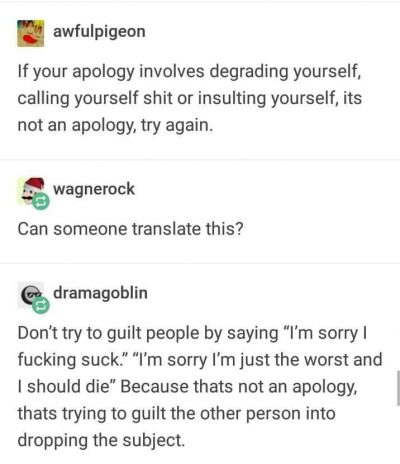 However, I want to rewrite the classic definition of micromanipulations of someone deliberately using them in an abusive way. Instead, I want to make sure it also includes micromanipulations by people that are unaware that their behaviour could have a toxic effect. Hopefully, by the end of this article, you’ll agree with me.

Micromanipulations are a form of emotional, and often psychological, abuse, but a lot more subtle (Metro). Hardly surprising, but people use these micromanipulations to manipulate other people for their own gains (GetToText).

There’s a belief that only narcissists engage in abusive behaviours, but that’s not the case. Any of us can display narcissistic traits because narcissism exists on a spectrum, which can be triggered by personality types, risk-taking behaviours, and life events (Stylist).

Because you don’t have to be a complete narcissist to engage in these behaviours, you can stop thinking of Donald Trump. People use these micromanipulations, consciously or unconsciously, to influence and gain control of other people through their thoughts and feelings (GetToText). However, just because they’re unaware, it doesn’t make it any less abusive, especially if they’re not willing to change once this has been pointed out to them.

According to the therapist Stina Sanders, micromanipulations are an intentional way of controlling someone by garnering of sympathy, in situations like a fight, by redirecting the narrative to gain control. This is a view also shared by Kristy Lee Hochenberger, as said in her article for Psychology Today, stating that micromanipulations are used to gain the sympathy and empathy from their partner.

This form of intentional manipulation often comes in the form of inconsequential comments, often made in passing or dropped casually into a conversation (Psychology Today). An example of this is when someone “accidentally” sends you a message that suggests something is wrong, then sending another message claiming that was a meant for someone else. They do this to hook your attention through your empathy, because you’ll likely want to ask what’s wrong.

One of my friends contacted me last year to ask for my advice about someone they knew. It turned out that the person kept using micromanipulations on my friend by suggesting they’d kill themselves if my friend didn’t talk to them. They just wanted my friend’s attention, although I don’t know why.

My advice to my friend was to set up some boundaries, explain that they can’t keep doing this with their friend as they can no longer handle the stress, and to provide them with information for mental health crisis organisations. I also packaged up my advice with a lot of reassurance around putting their own wellbeing first because they felt guilty.

The treat of harming one’s self is a common micromanipulation. I’m sure if you think back, you’ll have heard about someone using this method or have experienced someone doing it first hand yourself. I have both firsthand and third hand experience of this.

My partner’s parents also have a way of using micromanipulations that my partner always complains about, which might be quite common among parents. They frequently add, “It would be nice if…” before stating what they want, such as coming to visit and staying over. Although it doesn’t bother me in the slightest because guilt isn’t an effective way to manipulate me, it really bothers my partner. Do any of your parents do something similar?

The most common reason that unintentional micromanipulations can happen in a relationship (most likely in family and romantic relationships) is because the person needs attention or affirmation. I know this, because last summer I realised why my depression had been getting far worse than normal. Something my partner was doing had been getting to me, and I wouldn’t have realised if it wasn’t for the pandemic.

I realised that, although my partner is extremely supportive and understanding, they use a couple of micromanipulations that have been chipping away at my wellbeing. My partner has an issue with becoming defensive easily, and over things that don’t matter. As a result, they’ve unintentionally weaponised that anger.

When we have conversations about things and we have a difference of opinion, even on subjects that we have no personal investments in, my partner can get angry. This anger is likely part frustration because they don’t think they’ve explained it in a way I’ve understood, even though I have. But when they get like this, I change my behaviour to either withdraw from what we’re talking about or to wait for them to settle down.

It doesn’t help that my partner seems to think every disagreement is an argument. From my partner’s perspective, we’ve argued a lot because of this. Whereas I don’t think we’ve ever really argued. My partner knows they do this as we’ve talked about it a few times. But until they work on their anger and the quickness of their defensive response, this likely won’t change. But this isn’t the micromanipulation that caused my depression to nose dive. 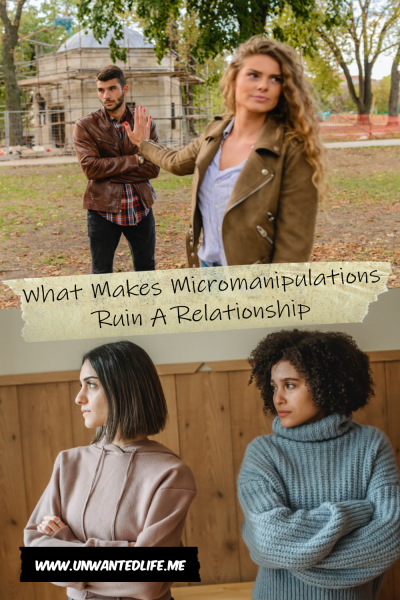 My partner and I don’t live together and we never plan to. So when we had to go into lockdown, we couldn’t see each other. To help my partner to cope with the isolation, we started having date nights by videochat and did weekly exercise sessions over videochat too.

Those that know me will know that I have problems with exercise tolerance that can leave me feeling extremely unwell for hours. This could be because of my reactive hypoglycaemia, the problem with my heart, or be an issue with my autonomic nervous system. I still don’t know why it happens.

I noticed that whenever we had these videochat interactions, I couldn’t end the call when I wanted too without having to deal with changes in my partner’s behaviour. They were using micromanipulations, by using a chance of tone to keep me in the conversation, even when I feel really unwell because we exercised.

After more than a year of this, I just couldn’t take it anymore and I stopped videochating with my partner. However, this made me realise that this happens any time we spend time together, especially if I’m at their place. It’s something we need to work on, and hopefully we will do at some point.

Communicating with your person about their use of micromanipulations is an important step to getting them to stop and for you to establish boundaries. If they continue to keep using micromanipulations, then maybe it’s time to consider the person to be an abuser.

For more information on abuse and what you can do, click here and here.

As always, leave your feedback in the comments section below. Also, please share your experiences with micromanipulations in the comments section below as well. Don’t forget, if you want to stay up-to-date with my blog, then sign up for my newsletter below. Alternatively, get push notifications for new articles by clicking the red bell icon in the bottom right corner.

48 thoughts on “What Makes Micromanipulations Ruin A Relationship”