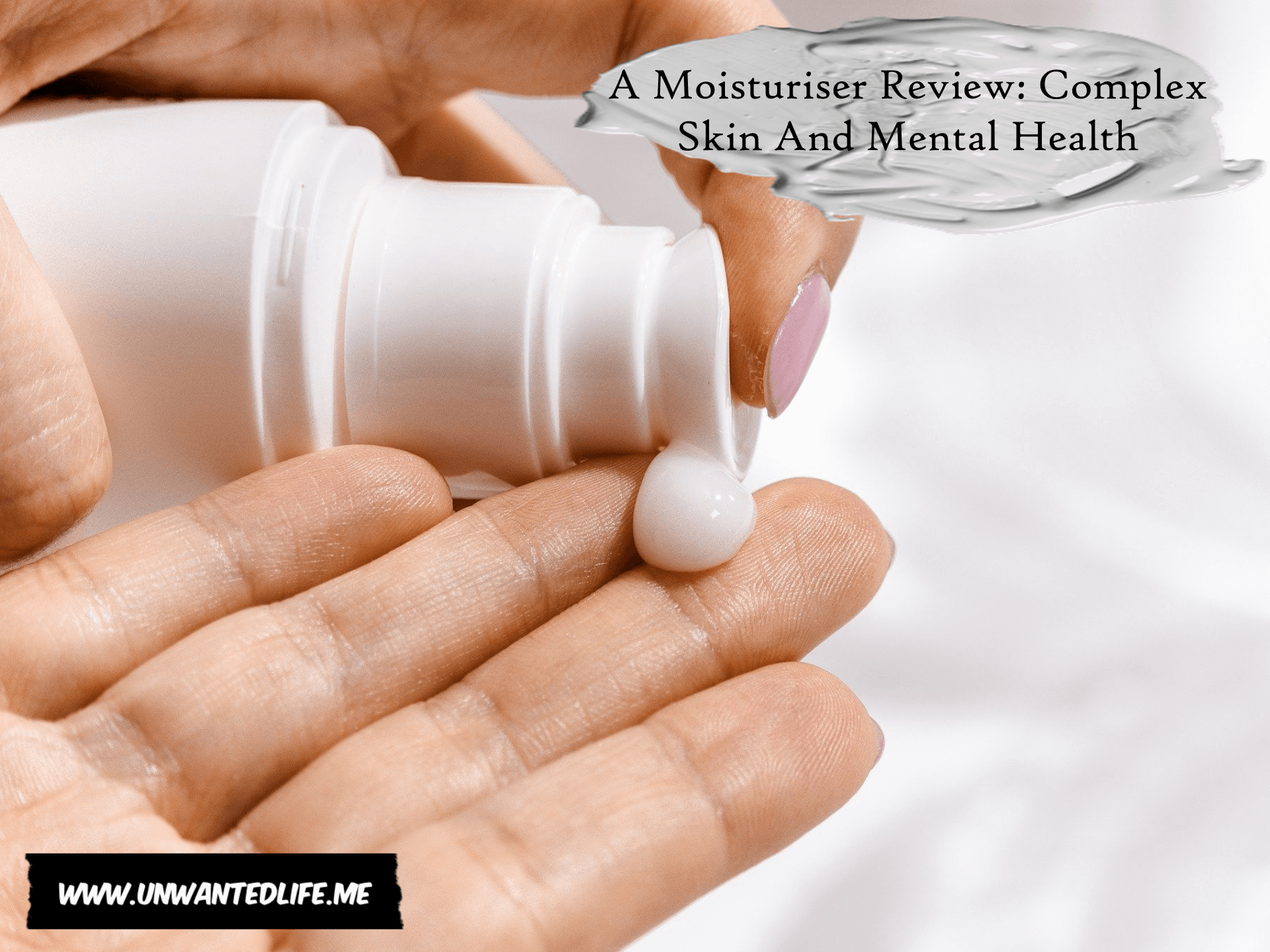 This isn’t the kind of thing that I was expecting to blog about: a moisturiser review. But it really grinds my gears how the beauty industry gets away with making claims that aren’t based on real scientific evidence.

For years and years, I’ve been trying to find a moisturiser that works for me. I’ve lost count of how many moisturisers I’ve used in my lifetime, let alone over the last year. Which is made harder by the fact that I’m allergic to whatever it is they use to add scents and stuff to their products. This obviously drastically reduces the range of products I can choose from. So if a product is really overplaying its scientific credentials, it better add up. But they never do.

Thus, this post will be reviewing the La Roche-Posay moisturiser, Effaclar Duo (+). A product and company that really likes to brag about its scientific-based claims.

Contents show
Why Am I Reviewing A Moisturiser?
The Moisturiser Review
Investigating Their Claims
The Verdict
My list
Summary

Why Am I Reviewing A Moisturiser?

I have two anxiety disorders, social anxiety disorder and agoraphobia, and if you’ve read some of my previous posts (The Weird Behaviour Of My Anxiety Disorders for example), you’ll be aware of some of the problems they cause me. Like how my anxiety is affected by my appearance.

Also, if you’ve read my articles about my permanent traction alopecia (Traction Alopecia: The Hair Pulling Question and Life With My Hair Destroying Behaviours), you’ll also be aware that I suffer from body dysmorphic disorder (BDD). Although this hadn’t been officially diagnosed.

My point is, I worry about my appearance for many reasons, and as such, having combination skin which is mainly horrible, dry, and flaky, but also oily (especially around my nose when I’m hot), is a huge problem for me. My pores get easily blocked because of this combination and cause whiteheads. My hair follicles are also constantly blocked. 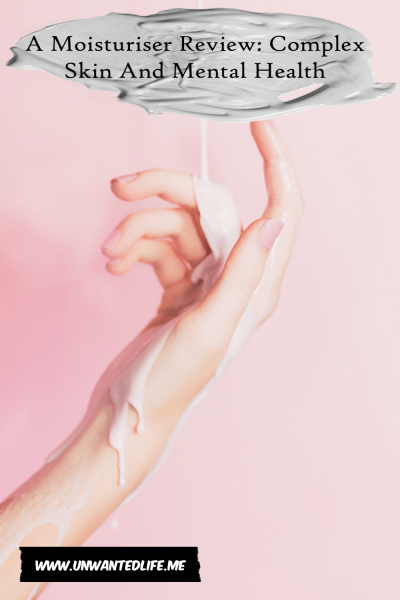 I’ve tried dozens of different products in the last year or so, none of which worked. It didn’t matter how much it cost, £1 or £15, if it was ‘own brand’ or a respected brand product, the result was always the same: zero improvements.

I even went to see a dermatologist at my GP surgery for some proper professional help, and the product they recommended as being amazing is what I’m writing this post/review about.

Or what I should say is, that I’m doing this review more as a warning. A warning that companies like this, even recommended by the medical field, aren’t actually based on any real science.

I booked an appointment to see the dermatologist GP at my GP surgery, with the hope of getting some unbiased advice on a moisturiser that would work. We talked about my problems and they looked at my skin and then they recommended La Roche-Posay’s moisturiser, Effaclar Duo (+). 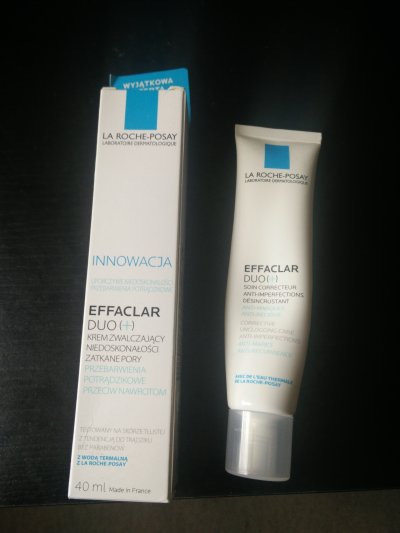 On the advice of the dermatologist, I went around the shops in town to try and find the product. I was disappointed at the price for such a small amount of product, £16 for just a measly 40 grams. I’d be lucky if that would even last me a week.

One of the claims on the product that got my hopes up the most was the fact that it “Hydrates skin for 24 hours”. It does not. Within 10 minutes of putting the product on my face, my skin was as dry as it was after washing my face. I may as well have not used the product at all. That’s how useless this product was at hydrating my skin. 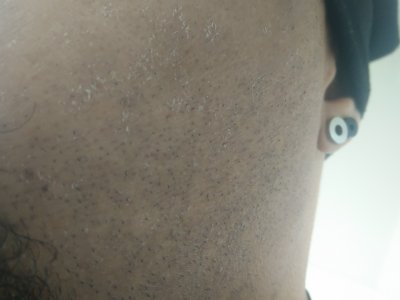 Their other claims that the product “visibly reduces blemishes” and will lead to “clearer skin” all turned out to be untrue as well. As I said, using this product was as effective as not using any product at all.

I was using the product twice a day, after washing in the morning and after washing before going to bed in the evening. I even tried mixing it up. Because it wasn’t making my dry skin any better, I tried applying the product onto a slightly damp face in the hopes it would trap that moisture and make my skin more hydrated that way. But that didn’t help either.

My partner kept telling me to give it longer to work, which I did. kept using the product in the hopes that something would improve, and used the entire tiny tube up. But there was no improvement. Paying £16 for a product that is a struggle to make last more than two weeks, when it’s as affect on my skin as a £1 product from Poundland, or a more reasonably priced product from Superdrug own brand range: Superdrug Aqueous Cream 500G.

To sum up, there were still zero improvements, and as such, didn’t have any positive effect on my mental health. If anything, it made it worse due to the frustration.

The company, like a lot of beauty product companies, loves to play up how its claims are based on “real” scientific investigation. Because of this and my experience with the product, I decided to reach out to the company that made the product.

I asked them by private message on Facebook about the scientific merits of their claims. 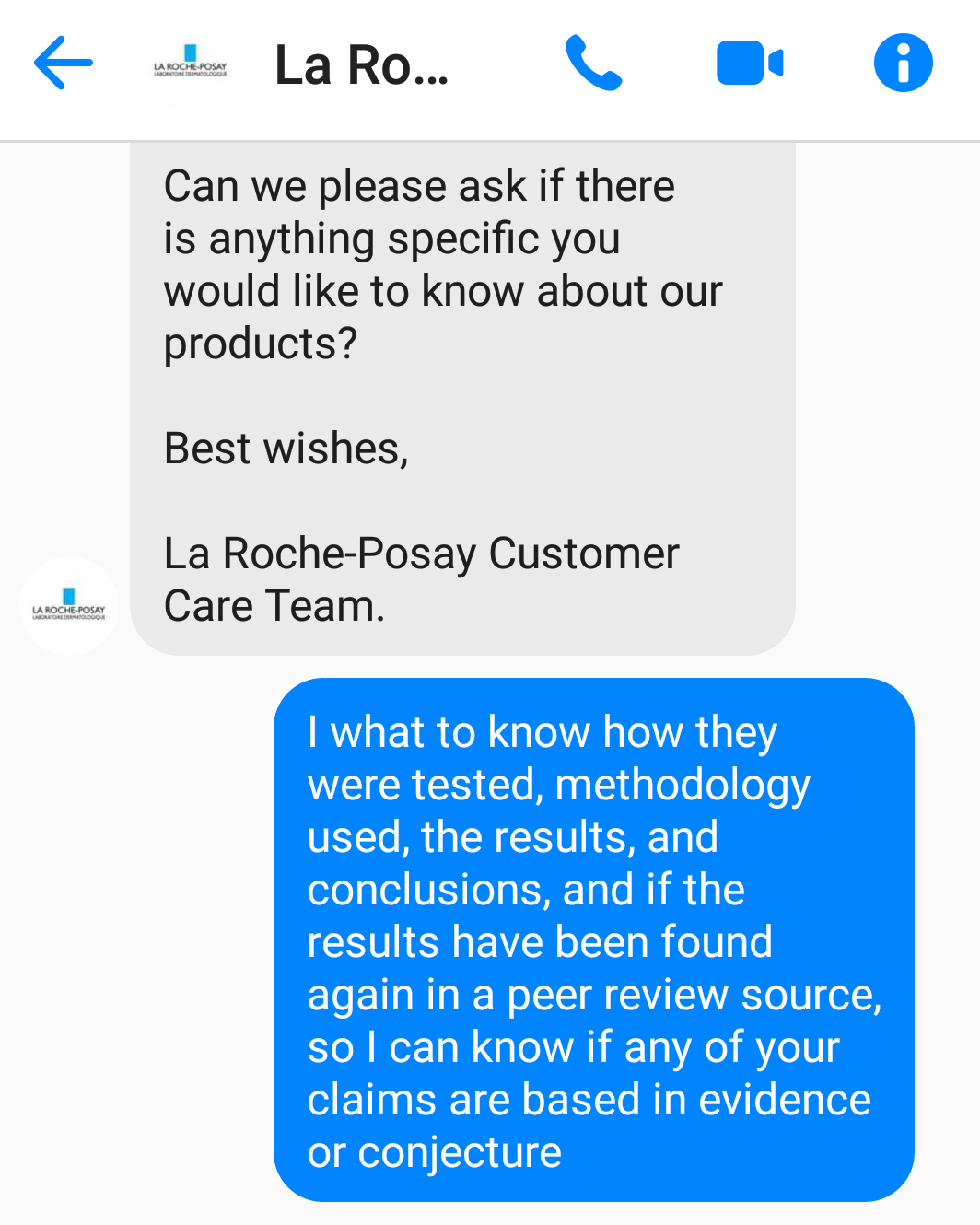 As I was complaining about their product and going through the process of proving my purchase (which is how I got their email address), I asked about the scientific foundations of their claims. 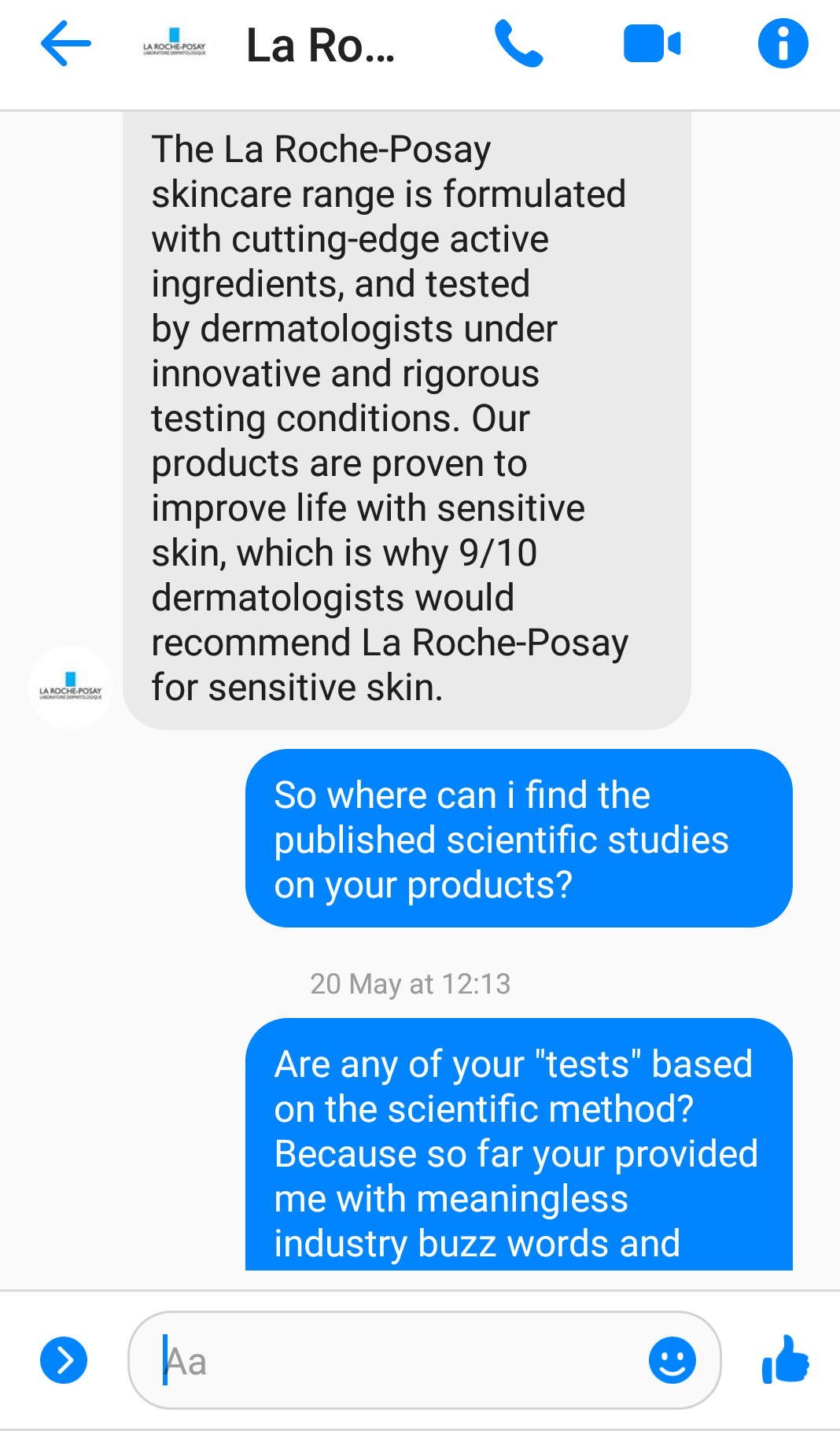 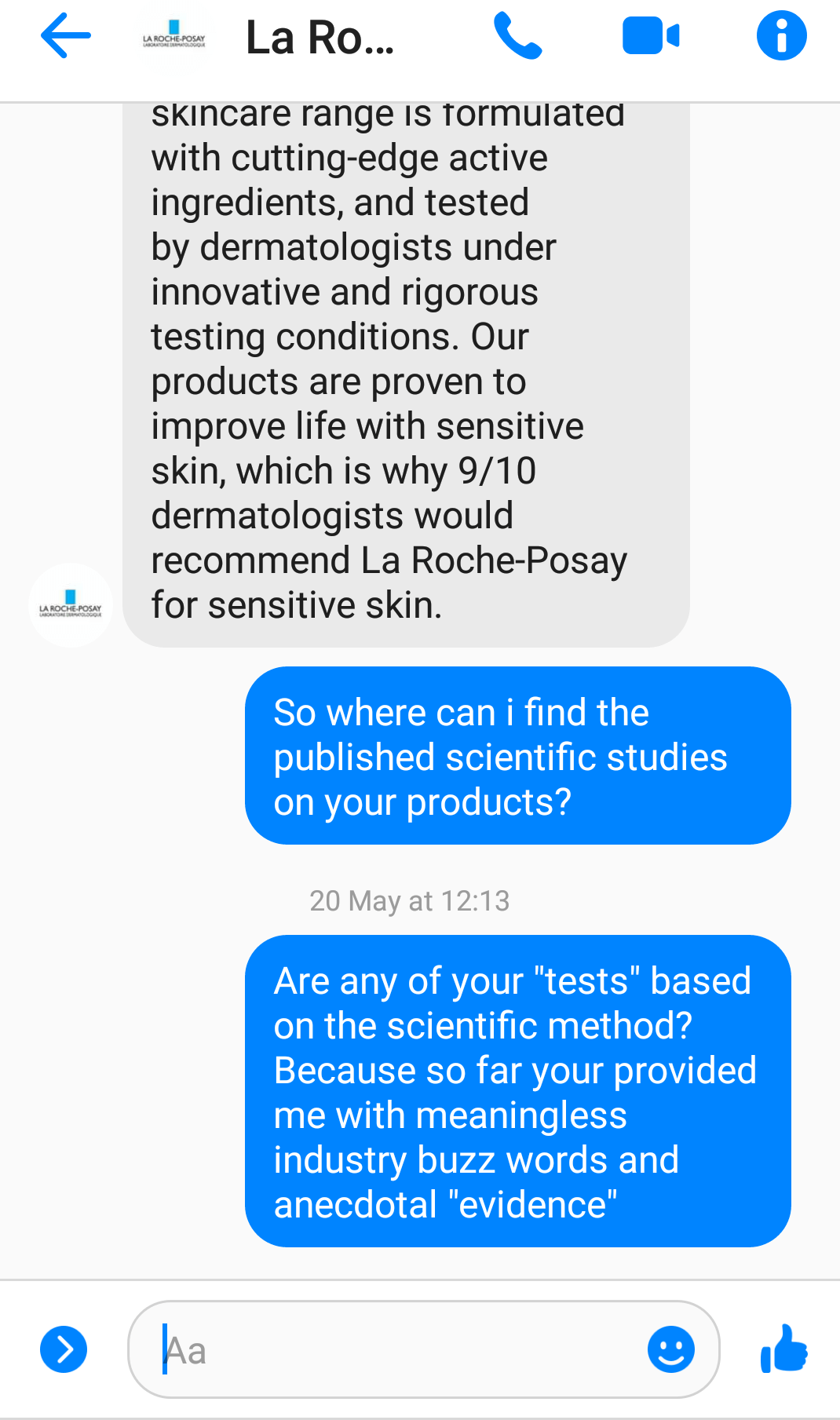 At first, I got the usual scientific-sounding industry jargon and a claim you hear often: how many dermatologists recommend it. Which doesn’t mean anything. They aren’t researchers, and most likely don’t even use the product for what it’s claimed to be used to help with. Surprisingly, the company then went on to admit just that. 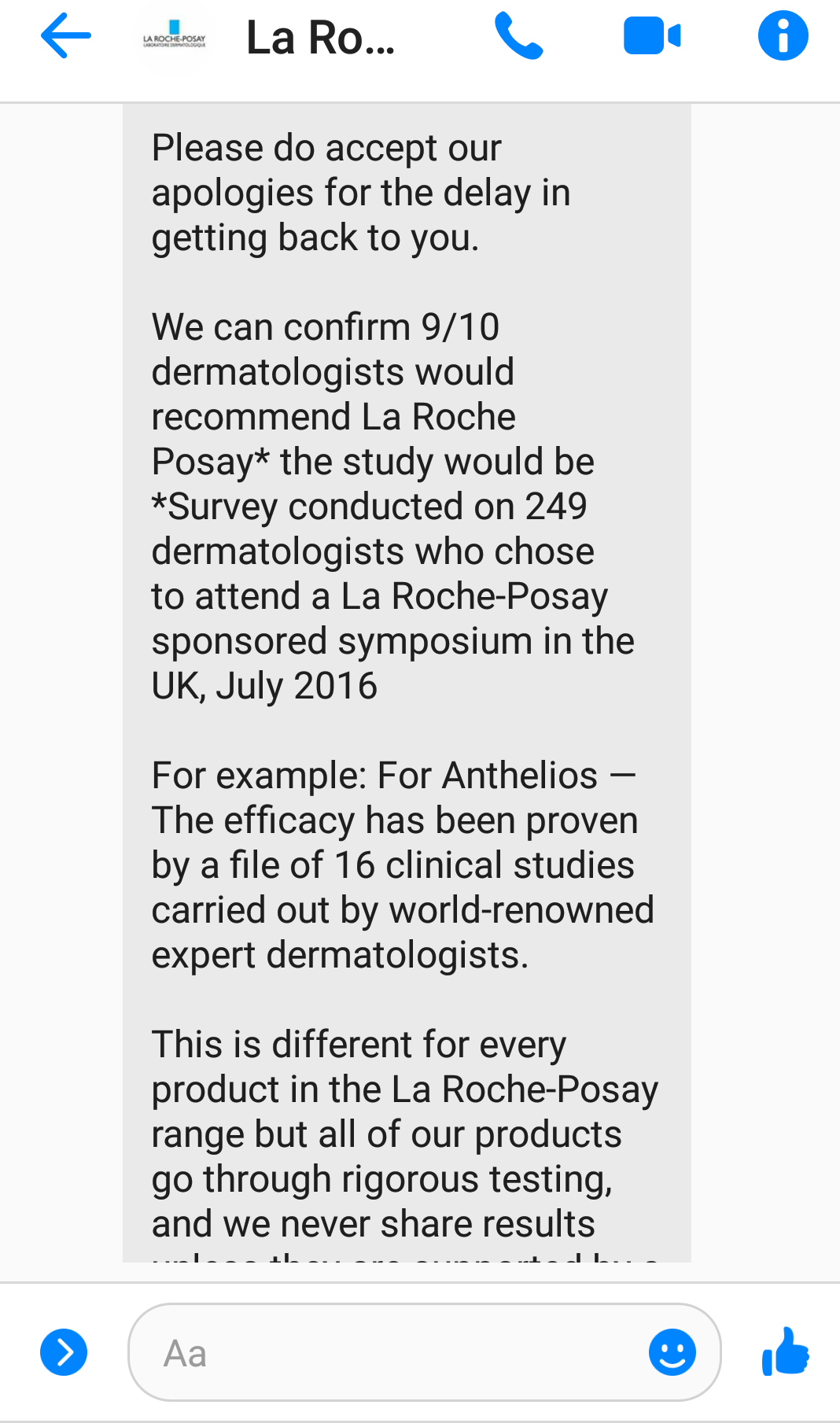 So the claim they like touting is that a load of dermatologists came to an event they sponsored, and 9/10 of those who attended recommended the product. That isn’t scientific at all. At the very least, you should perform the test on the people with the skin type this product is aimed at.

How objective do you think people would be if they’re invited to an event a company sponsors, and then asked to give a quick review of one of their products whilst they’re there? 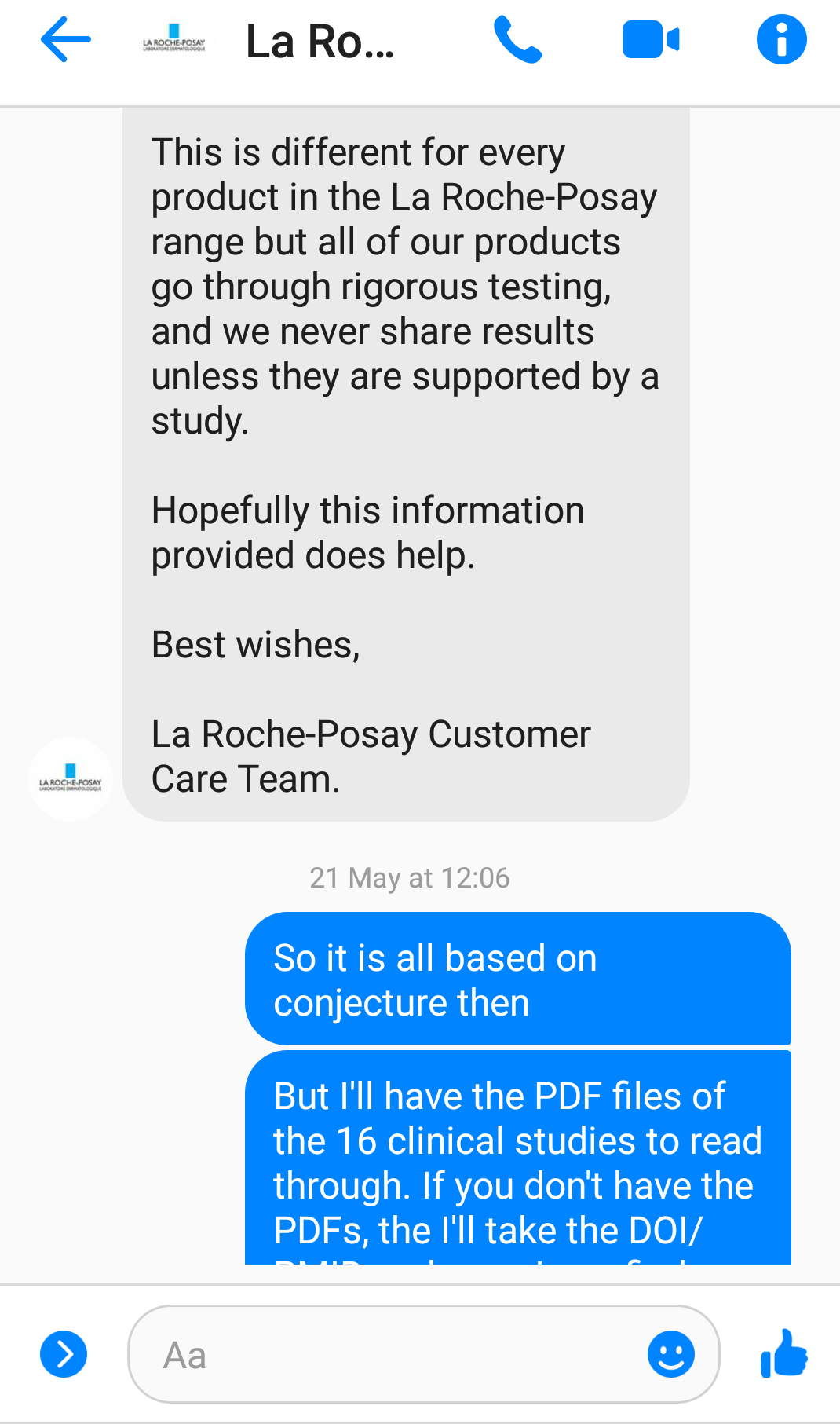 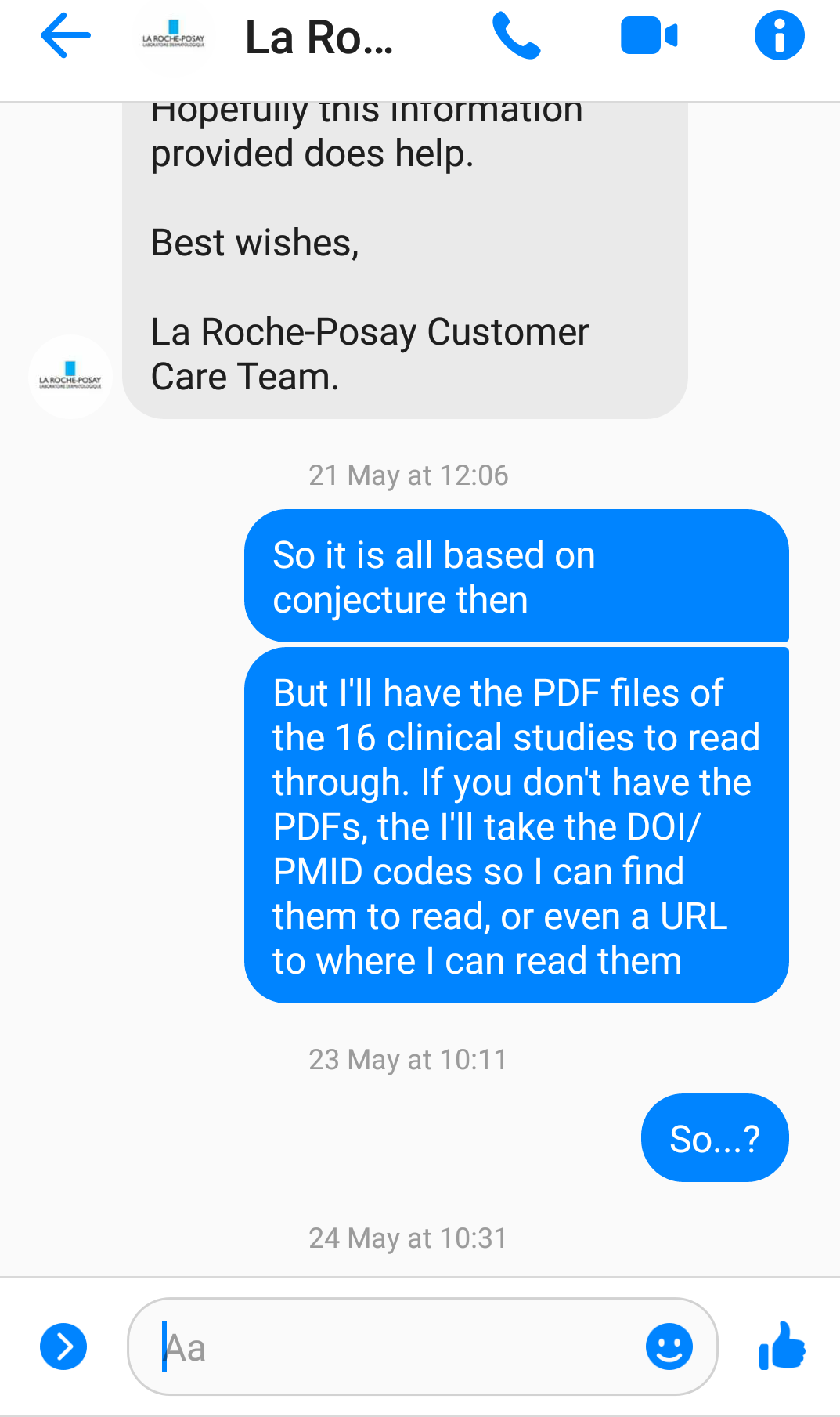 However, they did also say their claims for this product are backed by 16 “clinical” studies. They also stated that they never share results unless they are “supported” by a study.

Thus, I asked for either the PDFs of these studies, the study names and details, DOI/PMID code, or URL addresses of these studies. This would allow me to check the scientific merits of these “studies” and be able to see how valid their claims are. 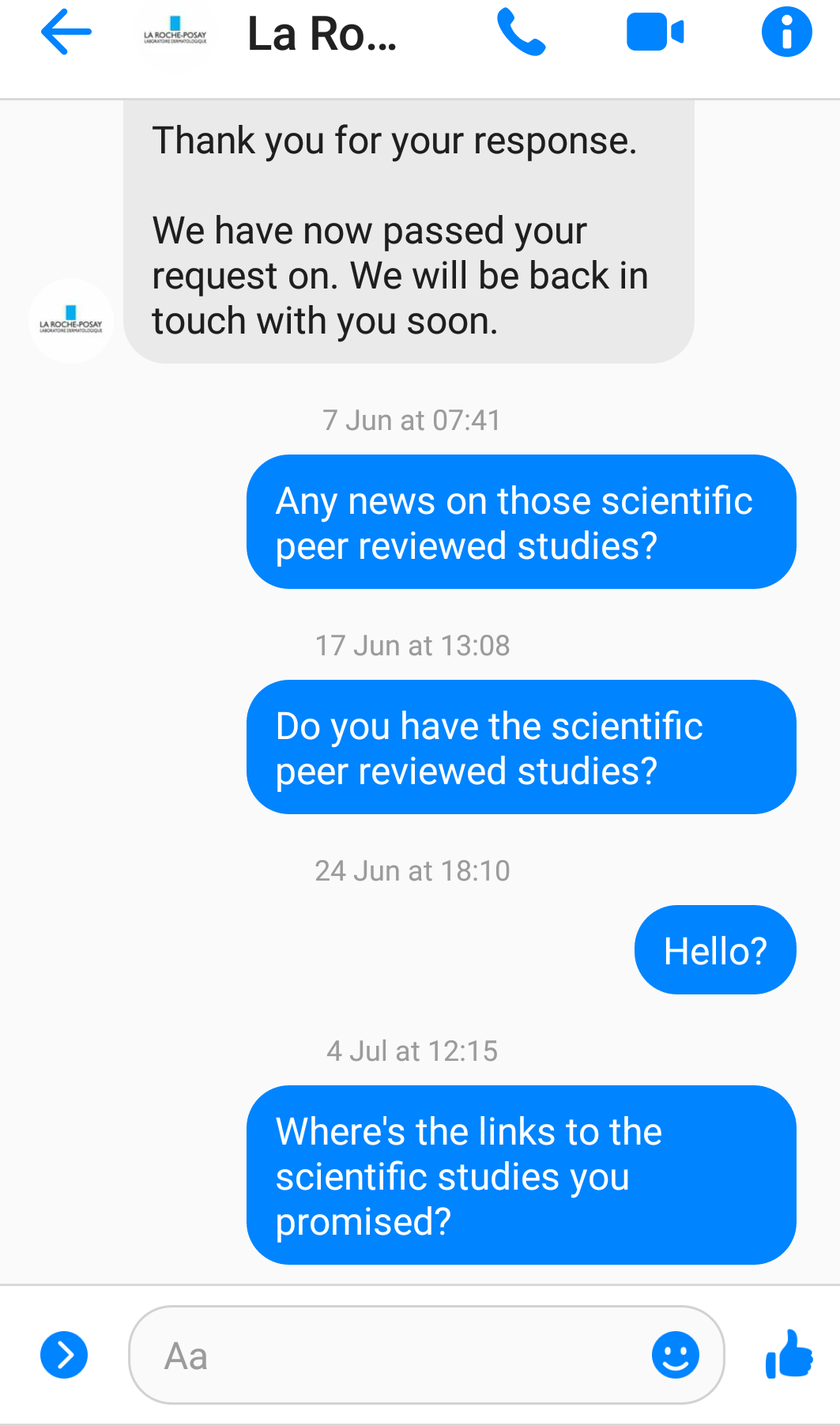 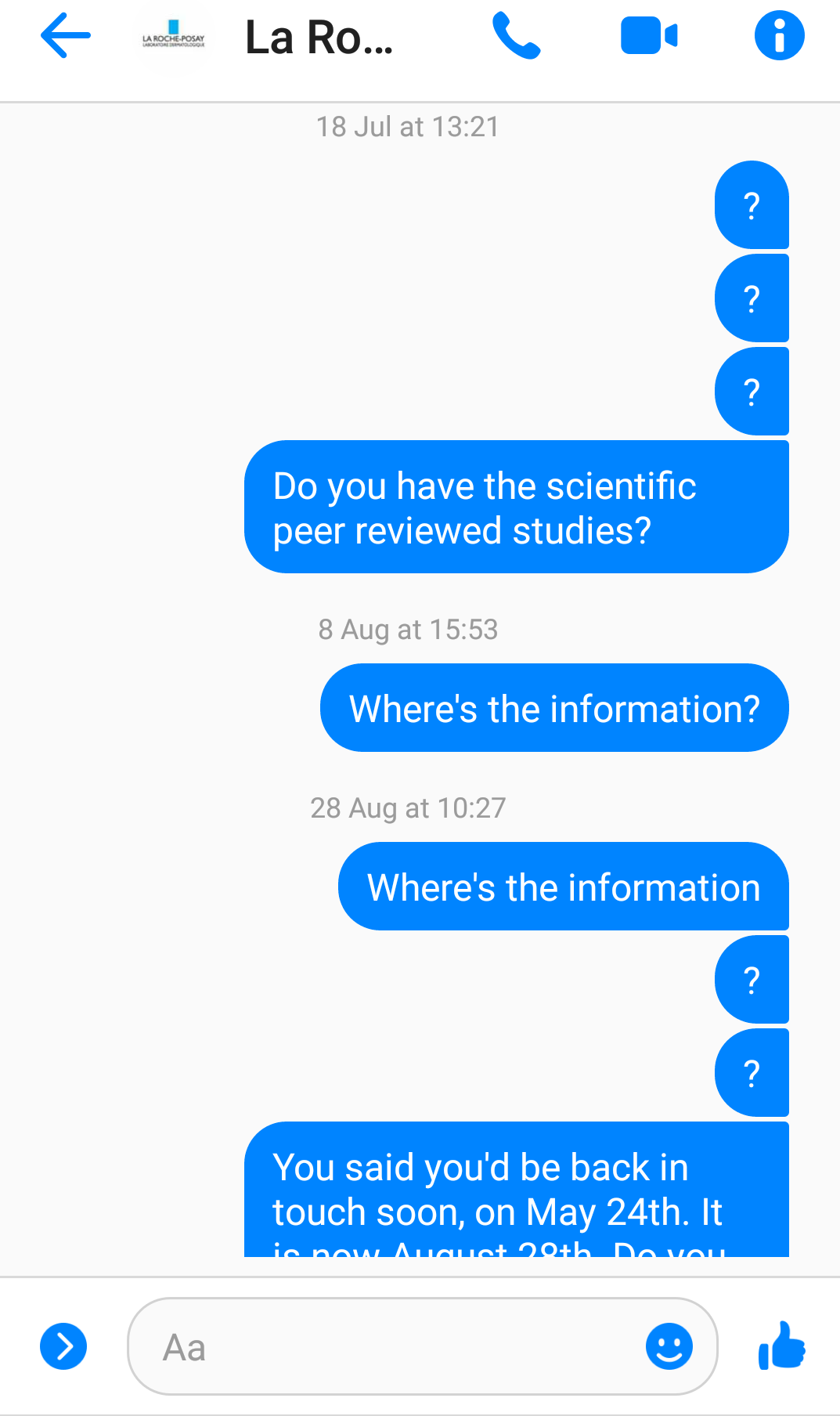 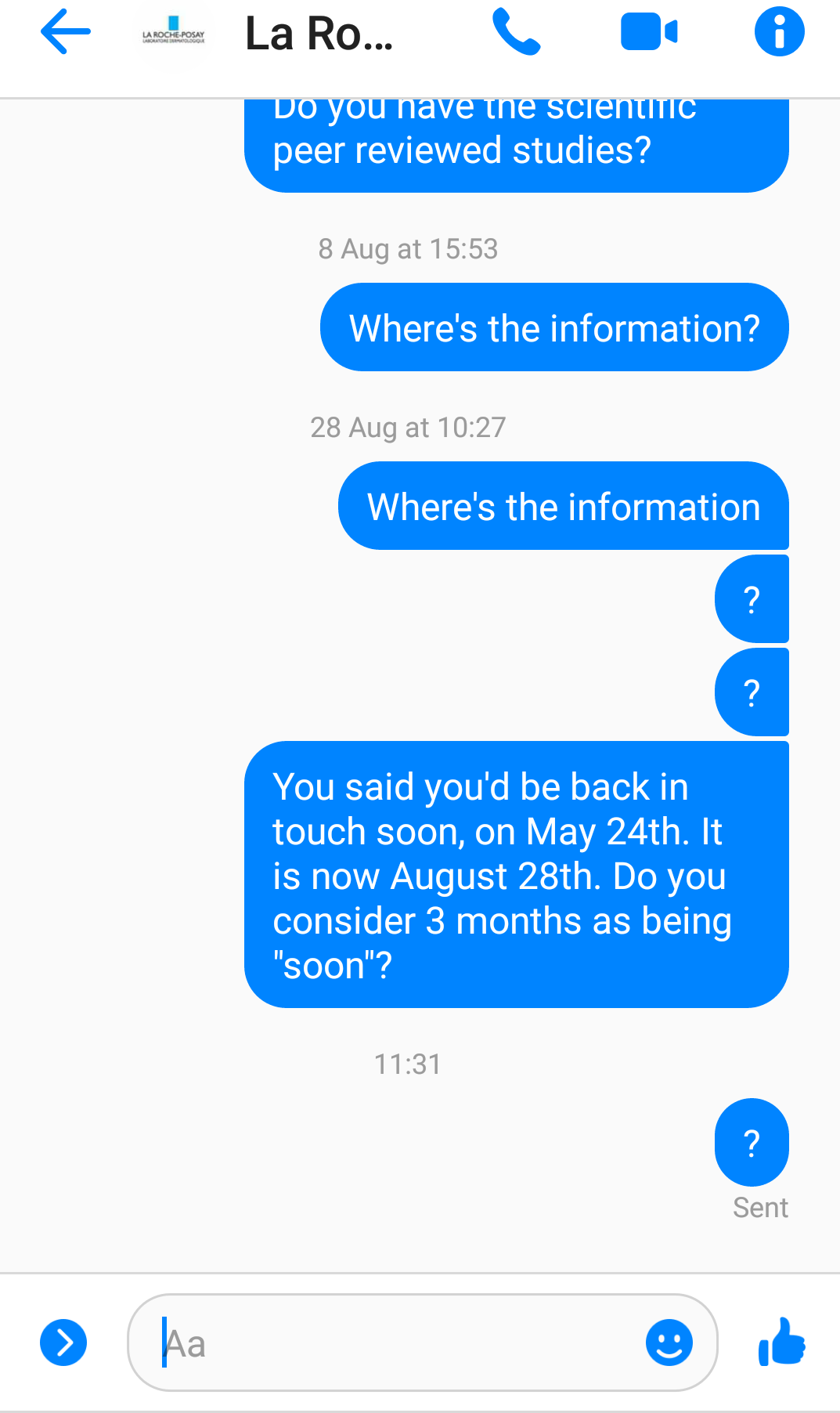 They proceed to ignore me ever since on Facebook. So I carried on pursuing this by email. Their email customer service team is no better. They either ignore me there or just ignore answering any of my questions in regard to the studies I’m requesting information on.

They offered me a refund for the product after I posted it back to them. They requested I said it to them so they could validate it’s a legit product. So that means it is a legit product that didn’t live up to any of its claims. But I think they’re only doing the refund in the hopes I’ll stop pestering them about their “science” backed claims. It didn’t.

I started all hopeful that a product recommended by a dermatologist from an official NHS-approved list would actually live up to its claims. But that hope was met with the crushing reality of the usual beauty industry lies. Their claims are no more credible than the cheapest products on the market, and I’ve tried a fair few over the last year or so.

In any case, the product doesn’t work for me and what they’ve said to me would suggest that there was no reason for it to work at all. It is, for all intents and purposes, no more useful than a pound/dollar store product or an own-brand one. The only difference is the cost and how much of the product you get for that cost.

It’s so hard to find any product that works, in an industry that avoids scientific scrutiny. Instead, companies like La Roche-Posay’s rely on flimsy sponsored events and industry jargon to make it sound sciency, and I just find that frustrating.

It’s been more than five months since I started my complaint, and I’ve kept up my request for the studies they said existed. However, they now just completely ignore me on Facebook and by email.

Is it too much to ask to find a product that’s reasonably priced, but that also does what it claims? I’ve tried so many different products and none have lived up to their claims. It’s soul-destroying.

Because this and other products haven’t lived up to their claims, my anxieties about my appearance haven’t improved, and my BDD hasn’t improved either. I just want to be able to manage my skin so it looks nice, so it doesn’t affect my mental health. Is wanting to not have dry skin too much to ask?

What using this product has done is make me more depressed because it failed to work. But also because it was an NHS-listed product. This makes it more disappointing because I expected more from the NHS. I assumed they would be strict about the claims such companies make about their products and demand proper scientific proof, but clearly not. Where exactly am I meant to turn now to find products that actually live up to their claims?

This is because the product…

And their claims are baseless 1/5.

You’d be better off buying any own-brand version or pound/dollar store product. At the end of the day, none of them is properly scientifically tested by an independent source, let alone peer-reviewed.

Weirdly, the best moisturising product I’ve ever used, so far, isn’t even a moisturiser. The product is called Bio-Peel Gauze Peeling Wine and is meant to be used to exfoliate (but if you ask me it doesn’t do that at all). I’m guessing it’s the wine that’s used in the product that helps my skin feel hydrated.

You can spend a fortune on these kinds of products, and they’re all based on misleading claims: I hate that. There’s little to no accountability with the claims they’re making about their products either.

They make these claims about how science supports what they’re stating about their products, but then you find out that it’s just a paid-for event they’ve invited people to that they’re really using as support.

If they do hint that there may be a real study, they then won’t allow you to view them yourself. This makes me wonder if these so-called studies even exist or if they’re just so scientifically unsound that they don’t want to share them.

As always, leave your feedback about my post in the comments section below. Also, feel free to share your experiences with using this, or any other, moisturisers and/or your thoughts on how the beauty industry works, in the comments section below as well. If you want to stay up-to-date with my blog, then sign up for my newsletter below. Alternatively, get push notifications for new articles by clicking the red bell icon in the bottom right corner.

9 thoughts on “A Moisturiser Review: Complex Skin And Mental Health”