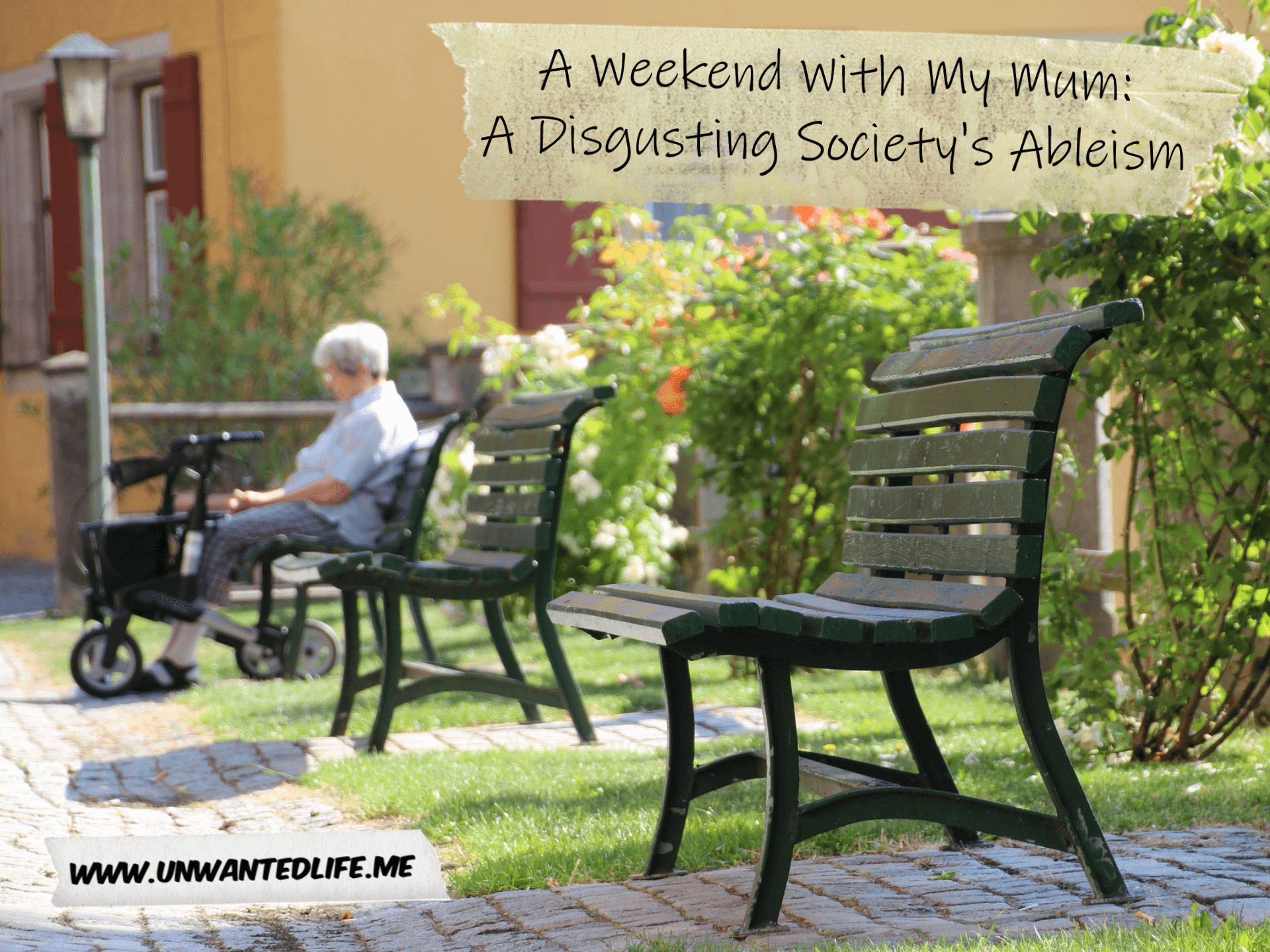 If you’ve read my previous article – Let The Battle Begin: My Weekend With My Mum – you’ll be aware that my mum came to visit me for the weekend. What you might not know is that my mum was made permanently disabled by her cancer. You also don’t know about the reactions of some of the people we meet over the weekend, due to my mum’s disability (she doesn’t know either, because I wasn’t going to tell her).

Ableism, sometimes known as disablism are the same as other forms of discrimination, like racism and homophobia. By that I mean they’re words to describe behaviours that discriminate against or are prejudice towards disabled people or people who perceived to be disabled (Access Living).

My Weekend With My Mum And Ableism

By enlarge, most the people we meet over the weekend were very helpful and kind to my mum, giving up seats on the train, allowing her walking aid to take up space that was stopping them from sitting in a chair next to her, going out of their way to point us in the directions of where the elevators are, stuff like that.

However, there were a few that weren’t so nice, who was talking behind my mums back. I’m guessing they didn’t realise I was my mum’s child due to us being different colours to each other, so they were often saying this stuff right next to me.

The number of people making comments about my mum because she can move well without her rollator walking aid, all because she was being allowed to sit down first or being taken a different way, first, to get to somewhere, is truly shocking. My mum’s cancer spread to her bones which wreaked havoc on her back, spine, and chest, going from 5’7″ to 4’11” in a matter of days because of it.

My mum can walk ok because her legs are fine, but her back and neck are still really messed up, hence needing the walking aid. But the comments being made behind her back, insinuating she’s not actually disabled, even though she has a hunched back because of the damage her cancer caused to her neck, made my blood boil.

I found myself having to explain to people what her cancer did to my mum in order to shut them up. I shouldn’t need to do that.

My mum’s neck and head stick out at a terrible angle which puts a lot of strain on her muscles, it also affects her balance because her centre of gravity is now a lot further forward than it should be. What’s wrong with people that they get angry that people don’t look disabled enough for them to be empathic. 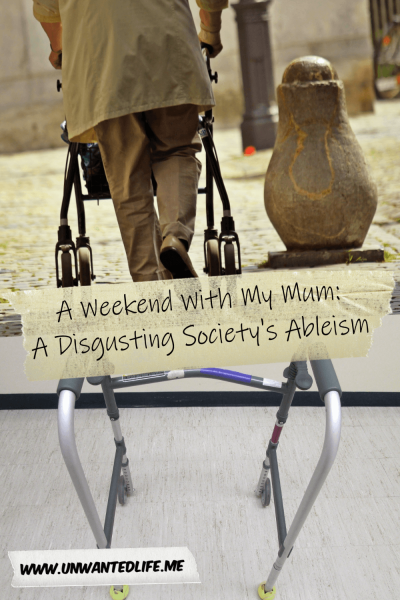 Not that they even needed to be empathic, she wasn’t getting any special treatment, most disabled access points cause you to have to go a lot further out of the way to reach where you’re going, then if you’d gone the way the abled body people can go. Most of the time I would just carry her bag and walking aid up and down the stairs/escalators for her so she could walk up, saving us all a lot of time because of this fact. So I got a bit of exercise that weekend.

My mum has to fight back tears whenever she starts to talk about or thinks about how she ended up this way. My mum went to the GP and listed all the problems she was having, some six months before her cancer wrecked her bones. If they’d have tested for cancer then, my mum wouldn’t be disabled.

When my mum brought it up in the restaurant we went to on the first day of her visit, you could see how hard she was trying to hide how upset it was making her. Which is understandable, her life changed forever due to her cancer not being picked up earlier.

I fully understand where she’s coming from. I had a similar experience with my autonomic disorders. I first reached out for help with dizziness and losing the ability to move due to extreme muscle weakness in 2007. I  wasn’t taken seriously until my heartbeat became erratic and my chest pains became constant, some seven years after first seeking help. I made several attempts to get help, but they were just brushed off, and then after a while, I just gave up trying, what else can you do in that situation?

I’m also worried that because I look normal that I’ll also have to suffer comments like those made towards my mum. Which isn’t good for my anxiety disorders. It’s just more fuel for the anxiety fire. Every day is a struggle with both my mental and physical health problems, I don’t want to have to justify my health problems to other people.

Peoples health problems and disabilities shouldn’t have to be visible in order for them to be accepted. I hate to think about what people must say behind her back on a daily weekend, after the experience I had that weekend.

5 thoughts on “A Weekend With My Mum: A Disgusting Society’s Ableism”