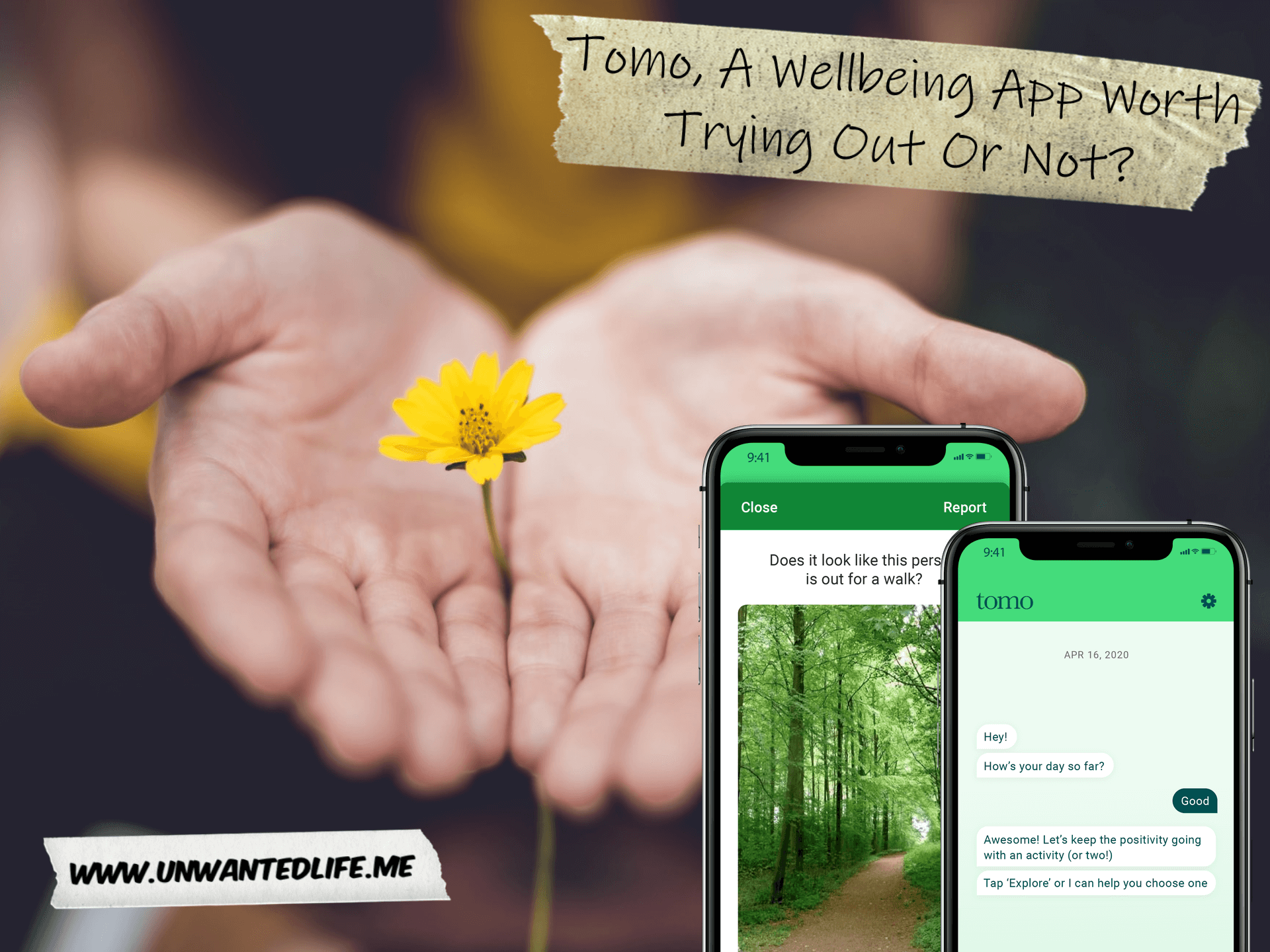 I stumbled across this app as it appeared on my Facebook newsfeed, so I thought I’d check it out. Upon trying out this wellness app, I decided it could be beneficial to my readers to review it. Thus, this is my review of the wellbeing app Tomo. Heads up, Tomo is a subscription app, but they offer free trails, which was what I was using.

Before we start, let me just say that this article hasn’t been paid for or endorsed/sponsored by anyone. However, if you’d like your product, app, or service reviewed, then visit my contact page, where you can download my media pack, and then contact me about how we could make that happen.

Getting Started With Tomo

The first thing I had to do was sign up using an email address so they could send me a code to use their app. Once in, I was greeted by a bot. Then after a few messages from the bot, it asked me to read their privacy policy, which I had to agree to. Pretty standard stuff.

Once I’d completed the basic sign-up stuff, Tomo asked me to complete a health questionnaire, the PHQ-8 to be precise. I scored an 18/24. The PHQ-8 is a questionnaire used to gauge your level of depression (Kroenke, Strine, Spitzer, Williams, Berry, and Mokdad, 2009).

After the PHQ-8, came a second questionnaire. However, the second questionnaire made little sense as it was asking me about how my experience with Tomo had affected my ability to understand my issues, help myself, etc. so far. Which is ludicrous at this point. I’ve been using the app for 10 minutes.

Once the questionnaires were out of the way, I was asked to fill out some basic information to anonymously take part in their partner organisations research projects. This probably should have been the first thing Tomo asked you, as this might put some people off. However, you can opt out and it only asked about gender identity and age.

Getting To Grips With Tomo

With all sign-up stuff out if the way, Tomo gave me the options to explore the app to find a goal to work on or to find a goal with the help of their bot. I opted for the latter. I eventually ended up selecting the health life skill task. However, as much as I neglect my health, the options it was suggesting I do were extremely basic and things I already do, which was a shame. I reported a similar issue with Woebot when I reviewed their wellbeing app. 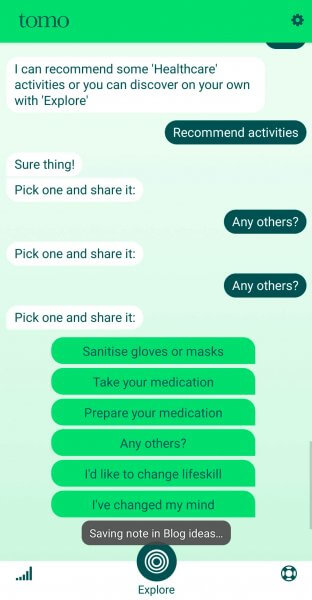 The options the motivation skill suggested didn’t seem to have anything to do with motivation. Again, it was just basic stuff like go outside, sit in your garden, make a meal, and work at home. What does any of that have to do with motivation? That’s just doing things because I’ve been told to by the app. Granted, the hardest part of having a lack of motivation is to start doing a task, and once the task is started, your motivation to continue the task should take over. However, once you’ve sat in your garden (if you have one), the task is done.

I would have preferred being taught how to overcome a lack of motivation, the importance of discipline in motivation, and picking my own tasks, because I don’t have a garden.

I ended up just picking work at home as it was 00.40 and we’re all pretty much working at home now, so it should be an effortless task. When I did that, I got a pop up asking for permission to take a photo/video and then to access storage. I clicked deny for both, which stopped the bot dead in its track.

It turns out the app wanted to take a video/photo for the task. At first I thought it was to create some sort of image-based journal of what I’m doing, but I hate having my photo taken or being in a video. Plus, I’m not exactly sure what it’s wanting to capture after I’ve just selected a task option. 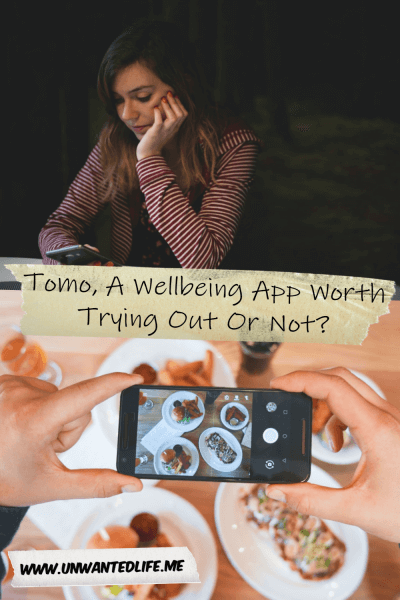 Because the bot stopped working due to me denying the Tomo app video/photo permission. I couldn’t do anything else, so I had a look around the app and this is how I found I was on a free trail as it gave me the end date for it. You can also see what paid packages Tomo offer.

While exploring the app after I messed up my task by denying the permissions it asked for, I came across their major feature. It turns out that the photo/video permission request wasn’t to do with an image-based journal. No, it was actually for their peer accountability feature. By clicking the little lifebuoy icon in the bottom right corner of the app, you’ll be taken to a screen where you’ll be shown a photo and asked if the picture showed if a particular task had been completed.

Other Tomo users are asked to decide if their fellow Tomo users are doing the basic task they’re being given by the bot by passing judgment on a photo they’ve uploaded. Because I had denied giving the app permission to take photos, I wasn’t able to show I’d done my task and thus take part in this feature. The problem is, the photos prove nothing, at least not in the ones I saw.

For example, one photo asks if it looks like they washed their hands. It doesn’t, I can’t see soapy hands, it’s just a photo of a bathroom sink. That’s not evidence that they’ve washed their hands, but that they took a picture of some taps. 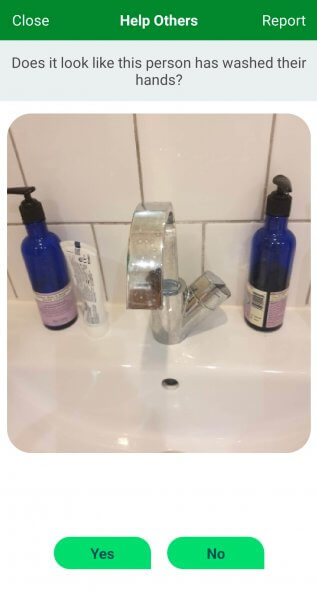 The bot restarted back to the beginning, which could be due to it not functioning because I denied it permission to take pictures/videos. So my advice would be to give it the permissions it needs right away, to avoid the issue I encountered.

After a couple of days, I returned to using the app, and it didn’t appear to have restarted again. I worked through the interaction with the bot, giving some suggestions about what looking after myself would be (exercising and eating less junk food). We then got back to the motivational life skills part again.

Unfortunately, I got the same suggestions as last time, which don’t feel like creating motivation for me. They’re just basic tasks. They’d be better off telling me to put my favourite energetic music on. I mean, how is making my bed going to motivate me to exercise or eat less junk food? If they came with an explanation, that would help at least. I’m guessing they’re hoping that completing a simple task will spur us on to do more.

I was also in bed using the app at the time, so making my bed and taking a photo isn’t practical. Because I hadn’t used the app since the first day, I still hadn’t changed the settings that allowed Tomo to use my phone’s camera. Thus, I couldn’t take a photo for the other Tomo users to decide if I completed the task or not. As a result, the bot just stopped again.

Again, I explored more of the app because of this issue with their bot. Clicking explore, it took me to the life skills menu where you can see the activity ideas. And, for some reason, playing a playlist is in the confidence life skill rather than motivation. To me, this would be better in the motivation section. I use music all the time to get myself motivated to work on my blog.

All the activity suggestions for each of the life skills seem to be there, and some are really basic, while others are a little more useful. However, I’m not sure why you’d pay a subscription for the app to tell you to do these when you select the right life skill when talking to the Tomo’s bot. They’re all self-care suggestions 101, which everyone and every organisation recommends.

Compared to the Woebot app I reviewed, this one is pretty uninspiring. If you’re looking for a basic app to help get you to create some basic new habits, then this app could work for you, if it was a free app. Not sure it’s worth paying for. I know I wouldn’t pay for it.

One of the other downsides I’m finding with the Tomo is just the amount of emails they send me. I get they want me to use the app and join a paid plan, but I don’t need to get a new email like every day about the app. Why not just send an app notification instead of all the emails?

I really wasn’t drawn back to this app, I wasn’t very impressed with it, and the constant emails I got from Tomo just made me less keen to reopen the app. I get what they were trying to do with uploading photos of your completed tasks, but most of the photos proved nothing. But I didn’t want to punish someone because of that when reviewing their pictures for their task. So I’d just skip answering yes or no if it didn’t show something that would be proper proof.

Although I wasn’t keen on the peer task photo review, I did like the idea of using peers, just not in its current form. Movements like AA use sponsors to help people give up drinking, so applying that approach to Tomo could make the app useful. Having a peer to talk to could help you stay on track, provide motivation, and add accountability. Implementing that could make this app great.

Once the free trial was over, the only options to keep using the app were paid options, but to be honest, this wasn’t a very good app, so I don’t know why anyone would pay for it. There are a lot better apps out there, Woebot being one of them.

I give Tomo 2/5 stars because of its use of peers that could add a lot more usability if done right to any wellbeing app. If Tomo takes my suggestion to change their peer feature to be more like that of AA‘s sponsors, I’d rank this app higher. Without the peer aspect of the app, I’d of given this 1/5.

Where You Can Find Tomo

You can find the Tomo website by clicking here. You can also find their app in both the Google Play store (it doesn’t seem to be on this store anymore) and Apple App Store.

As always, leave your feedback in the comments section below. Also, feel free to share your experiences with Tomo and other wellness apps in the comments section below as well. If you want to stay up-to-date with my blog, then sign up for my newsletter below. Alternatively, get push notifications for new articles by clicking the red bell icon in the bottom right corner.

63 thoughts on “Tomo, A Wellbeing App Worth Trying Out Or Not?”