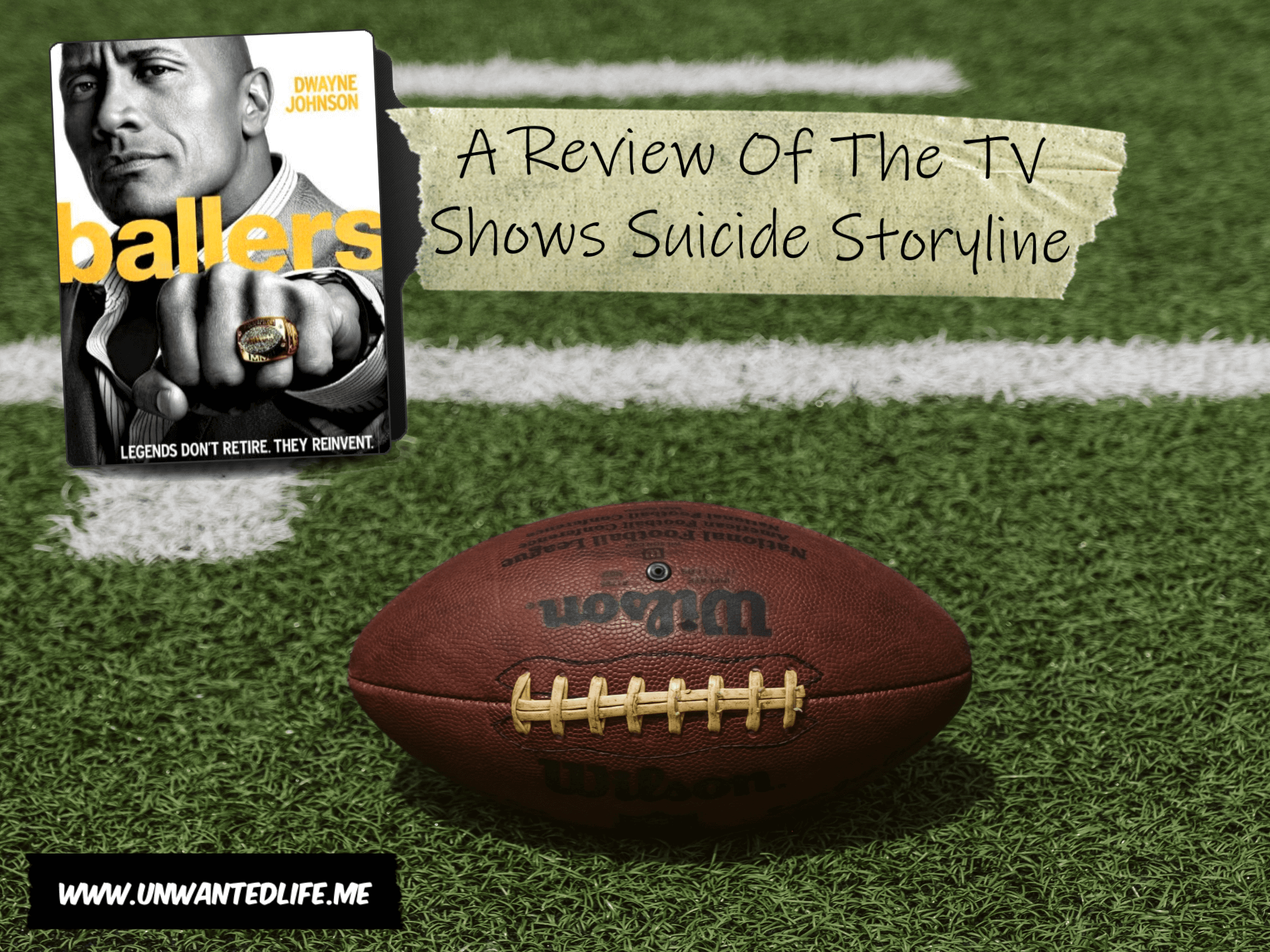 With the return of the TV show ‘Ballers’ and with suicide prevention month being upon us, I thought I’d write an article about the show’s suicide storyline. Plus, offer a review of the show in general.

For those not familiar with the American TV show Ballers, the show stars Dwayne ‘The Rock’ Johnson as Spencer Strasmore. Spencer is a retired NFL player who has become a financial advisor to other NFL players. However, in letter seasons, his career branches out. I can’t really say much more without spoiling the show for you.

Also starring next to the Rock is Rob Corddry as Joe Krutel, a financial advisor, who meets Spencer Strasmore at Anderson Financial.

This show might not be the kind of show you’d expect to tackle a suicide storyline, but it has. Especially given that it’s largely about sports and has the genuinely nice guy, Dwayne ‘The Rock’ Johnson, playing the role of an alpha male and former NFL player. But the show hasn’t shied away from the big issues.

They’ve also tackled the Post-Concussion Syndrome(Ricky Jerrett, played by John David Washington), and let’s not forget the reason for this post, the suicide of Dwayne ‘The Rock’ Johnson’s character (Spencer Strasmore) older brother, William. William was a one-time USC quarterback, who, due to issues with the NCAA, ended up taking his life. 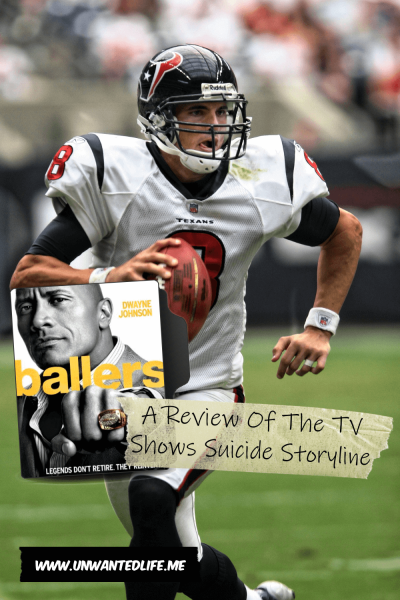 Another taboo male topic was broached in Ballers in season 3, the topic of fertility. Spenser realises he’s never had a pregnancy scare, and after dealing with a lot of reluctance, he eventually has his fertility tested. The results of which you’ll have to watch the show to find out.

For a show like this, which is largely targeted at a male audience, to tackle such issues will hopefully encourage men to seek help with their health. This is important, because men are more likely than women to commit suicide.

At the start of season 4 (episode 1), Spencer takes his friend and partner to the bridge where his older brother, William, sadly took his life. The death of his brother was part of Spencer’s reluctance to return to the West Coast, so it was a significant moment for Spencer.

This is the episode where Spencer decides to put his baggage to one side and stay in LA for the sake of the work they had there. In short, this is a scene created to show how Spencer is ready to lift the weight of his brother’s death off his shoulders, freeing him from his emotional burden (i.e. his guilt). 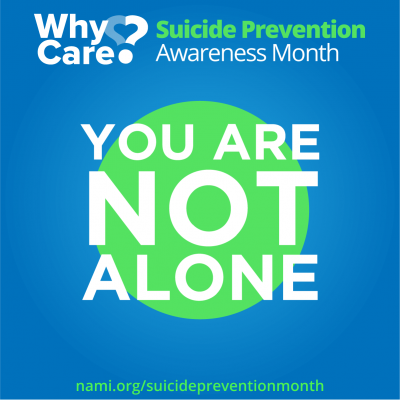 My mom tried to check out when I was 15. She got outta the car on Interstate 65 in Nashville and walked into oncoming traffic. Big rigs and cars swerving outta the way not to hit her. I grabbed her and pulled her back on the gravel shoulder of the road.

That’s a lot for any teenager to handle. For information on what you could do to help someone who’s feeling suicidal, check out my previous article Suicide And Suicide Prevention: Advice And Information.

Ballers weren’t normally the kind of show I’d watch, but I thought I’d give it a try when the first season premiered because there wasn’t much else available at the time. But I wasn’t disappointed. I’ve ended up watching every episode to date.

The suicidal storyline portrayed on Ballers resonated with me on many levels because of my personal experience. The show also highlights that people we consider having the whole world in their hands, with fame and money all coming their way, can still end up taking their lives. Mental health problems don’t discriminate.

Both Rob Corddry and Dwayne ‘The Rock’ Johnson act brilliantly in this show, and you see them showing their skills in a wide wage of emotional situations. The surprising scale and depth of the normally taboo storylines also show just how good their acting range is, and really helps to make the storylines relatable.

In general, I was surprised that I’d like such a show, but the fact that they were tackling the big issues around men’s health, athletes’ health, NCAA, etc. was what made the show really enjoyable and eye-opening to watch.

If you haven’t watched Ballers yet, give it a go, I would give it 4 out of 5 stars. Plus, it only has a 27-ish minute runtime, and each season only has 8-10 episodes as well, so it won’t eat up that much of your time either.

Unfortunately, it looks like season 5 will be the last, as HBO has cancelled the show. There hasn’t been a reason given for why the show has been cancelled, but it’s likely due to ratings. Which is a shame. I hope they at least round off the show with a proper ending.

Do you watch Ballers? What do you think about their suicide storyline? Have you experienced a loved one taking their own life or have you struggled with suicidal ideation? Let me know in the comments section below. 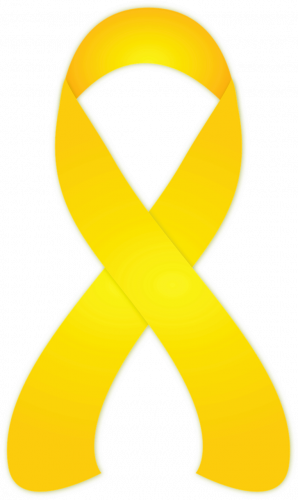 For more information about suicide and mental health, check out my previous article, Mental Health: Painting A Picture Of The Issues With Statistics.

As always, leave your feedback in the comments section below. Also, feel free to share your experiences of suicide and if you like the TV show Ballers in the comments section below as well. If you want to stay up-to-date with my blog, then sign up for my newsletter below. Alternatively, get push notifications for new articles by clicking the red bell icon in the bottom right corner.

Having a difficult conversation

Supporting someone with suicidal thoughts

If you feel you need help, then visit my Global Crisis Lines and UK Crisis Lines And Support page for a detailed list of Crisis Lines, Help Lines, Text services, Webchat, and more you can contact.

13 thoughts on “Ballers: A Review Of The TV Shows Suicide Storyline”