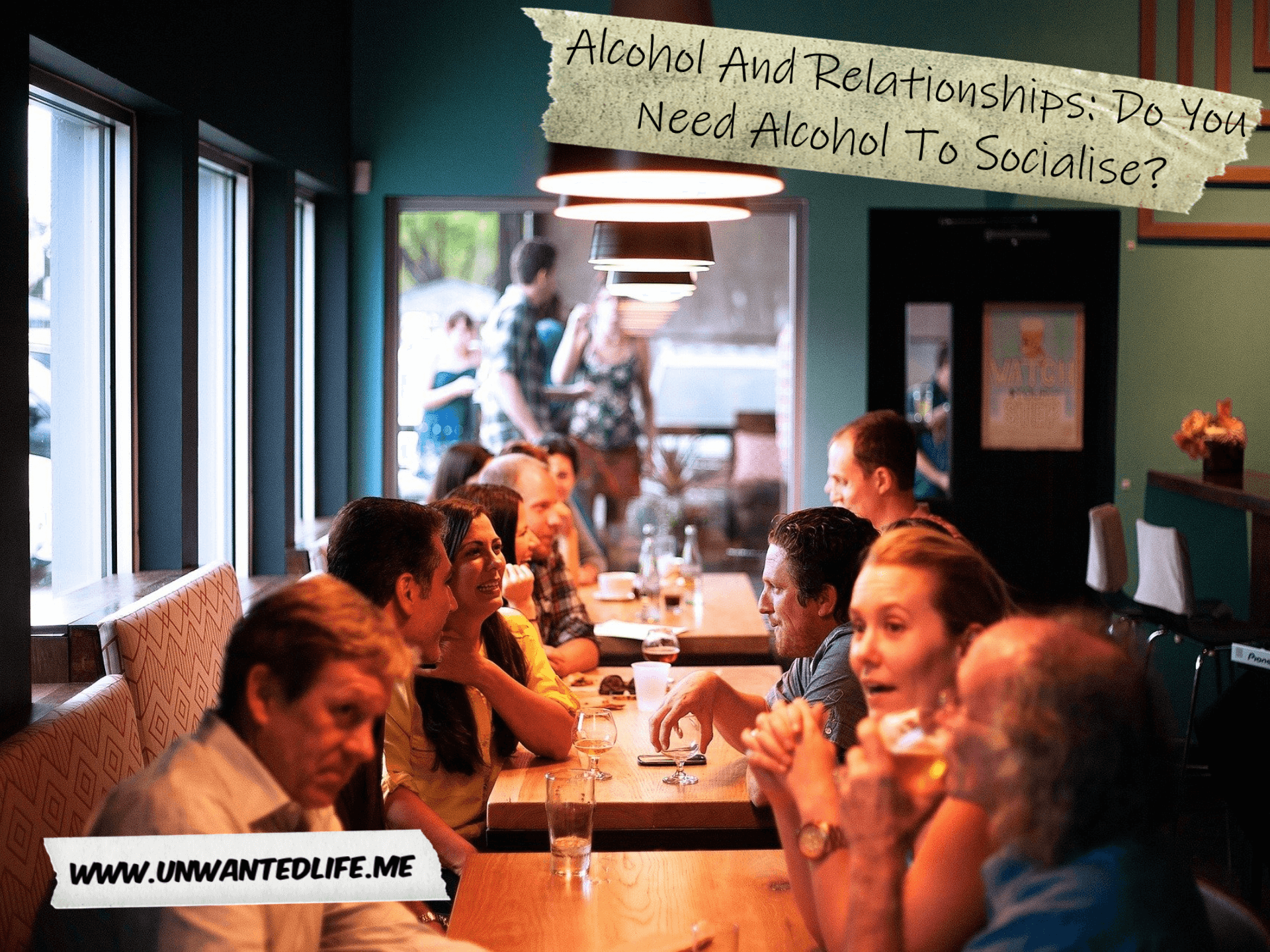 It’s Alcohol Awareness Week (15th-21st) this week and Alcohol Awareness Week is designed to help raise awareness about alcohol, which I plan to do. This year’s theme, according to Alcohol Change, is alcohol and relationships. Most of you know that alcohol can affect our friendships and loved ones through alcohol dependency and abuse. Many people also use alcohol to cope with the loneliness and isolation caused by the pandemic.

But I’m not here to talk about that aspect. This article is about our relationship with drinking as a means to socialise. People all over the world consume alcohol while socialising, but no one does it as well as us Brits. Therefore, this article will look at alcohol and relationships by discussing our need to socialise with alcohol.

Our Relationship With Alcohol

While researching for the alcohol and relationships theme of Alcohol Awareness Week 2021, I stumbled upon a question on Reddit that summed up the issue well. An American on the AskUK subreddit asked a question about Brits and our love for the pub, which highlighted Britain’s drinking problem. They asked:

Is “going to the pub” a real thing in the UK?

Is “going to the pub” a real thing in the UK? from AskUK

They asked this question because they’d seen that Brits in films and TV shows set in the UK seem to be constantly going to the pub. Which, they said, if someone was doing in the US, they’d been seen as an alcoholic. People of the UK were only too happy to tell them that yes, this is pretty much the reality of British people. For us, alcohol and relationships are synonymous. There is no one without the other. The replies to the question tell you everything you need to know about Britain’s relationship to alcohol and socialising.

Yeah will go pub at least 4 days a week, probs have about 4 or 5 pints on a weekday, maybe a few doubles and jagerbombs if the mood takes me, then double that on a Friday and Saturday. Its not alcoholism, its just being British

The pub is a place we can go well for pretty much any reason. Bored? Pub. Hungry? Pub. Football/sports on? Pub. Birthday? Pub. Celebration pub? Sunny? Pub. Just walking past the pub? Enter the pub? Thirsty? Pub. Just been on a walk? Pub.

For a lot of people, the Pub is just a social setting. Go there for dinner, coffee, drinks, catch up. I have friends that head to the pub a few times a week. When I worked in retail I was 18-21, I would go to the pub with my work friends after work a few times a week for dinner and a beer. We would finish late and our families had long eaten dinner by the time we finished.

Back when locals were a proper thing, many people would be in the pub every night!

I personally don’t visit pubs often anymore, but it is a very popular abs regular thing to do in the UK

People in the UK have a different relationship to alcohol than people in the US, it’s quite normal for us to “have a few” down the pub during the week, on several occasions. Whenever we socialise we usually pair it with alcohol, and the pub is the place that people often socialise

The comments go on and on like this with over 2,700 comments at the time of writing this article. Alcohol and relationships go together like a cold hand in glove in the UK. Brits just don’t seem to know how to socialise without alcohol being involved. Almost everything we do revolves around a pub in one shape or another. I know when I used to have people over before the pandemic, that would almost always involve alcohol. And if we meet up somewhere, it’d be a pub we’d meet at.

You don’t have to believe the many Brits on Reddit saying that our excessive drinking culture is normal for us, normal, but not healthy. Seaman and Ikegwuonu (2010) lengthy report on UK drinking, stated that it can be argued that the UK has always been characterised by excessive drinking.

The reality is, most Brits would be classified as being a problematic drinker. The majority of the co-workers when I worked at a substance abuse service would also fall into that category, as did I. The NHS states we shouldn’t regularly drink over 14 units of alcohol a week. But for a lot of us Brits, that’s pre-drinking before we ever go out at the weekend. But because we don’t drink every single day or need a drink in the morning, we don’t see it as a problem. Although we don’t seem to mind being a nation that’s dependent on alcohol, as long as we’re still able to function, it is very much a problem.

In my late teens and early twenties, I could part away most of a 70cl bottle of vodka as my pre-drink to going out. I’d then take drugs and continue to drink, and when the clubs would close, we’d have an after party. I think it was the heavy drinking that led to me developing IBS.

It’s been normalised to socialise by partying and getting drunk with friends and associating that with having pleasurable experiences, having a laugh, dancing, and having a good time (Ander, Abrahamsson, Bergnehr, 2017). It’s a similar issue for our Nordic neighbours too.

But the problem seems to be, where else can you meet up in the UK if not a pub, if you don’t want to go for a meal and you want to be able to talk to each other?

Until we can find a long-term solution to Britain’s drinking culture and provide other places to socialise, we can do something in the short-term. We can stop shaming people for not wanting to drink to get drunk or wanting to be sober, even when in a pub.

I was guilty of this is my younger years, but then I grew older, got a little bit wiser, and realised I should stop behaving like this. In the past I’ve convinced people into going ‘out out’ when they hadn’t planned to. I’ve also convinced people to drink when they hadn’t planned to drink or drink as much. Peer pressure sucks, and I used it without realising it to get people to drink, but I’m not the only one (Davies, Law, and Hennelly, 2018). To me, back then, there was no reason to go out unless you were going out to get drunk. A view shared by others too, making ‘drinking to get drunk’ a cultural norm (Seaman and Ikegwuonu, 2010).

My partner is very good at making sure they don’t over drink, drinking water been between alcoholic drinks and when they feel a little too drunk. A behaviour a lot of us would do well to adopt.

Part of the problem seems to be that drinking is part of being a man (Brooks, 2008), a masculine leisure activity that led to the so-called ladette. The rise of the ladette installed a heavy drinking norm for Brits of all genders, not just the lads. For those of you unfamiliar with the term ladette, it means a woman who gets drunk, gets loud, acts cocky, and enjoys sports, like a “lad”. The 90s weren’t as enlightened as we’d of liked. Gender roles and stereotypes really need to disappear already. Still, it can be argued that it helped change how women could socialise.

If we can normalise being sober, we can change our cultural and social norms, and in doing that, we can influence how our children perceive alcohol and how we, as a society, utilise alcohol (Fry, 2011). 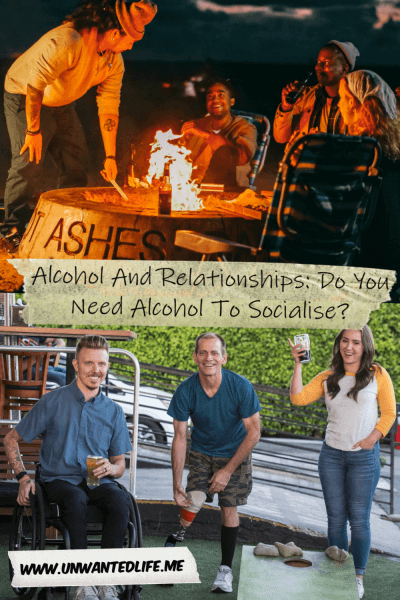 Dry January was the brainchild of Alcohol Concern, who became Alcohol Change after Alcohol Concern and Alcohol Research UK merged. Such initiatives have caused temporary spells of abstinence to become a familiar feature of people’s drinking lives (Yeomans, 2019). So if we’re willing to give up drinking for the odd month here and there each year, then maybe we can adopt moderate drinking and socialising without alcohol as well.

According to Brown, Hill, Smith, Johansson, and Davies (2021), there is an increase in dance events that are alcohol free. Having more alcohol free spaces like this would provide people with opportunities to socialise without having to drink, which is great. However, such spaces wouldn’t be needed if we normalised not drinking in the drinking spaces that already exist.

Look, I don’t expect you to go sober the rest of your life; I know I still enjoy drinking. What I’m proposing is allowing people to be sober without pressuring them to stop. What I’m suggesting is finding ways to socialise whereby you don’t have to have alcohol involved every time. Because if we mix in some social gatherings where we don’t drink, it’ll help us all move towards moderate drinking (Conroy and de Visser, 2018), which us Brits really need.

As Miranda Larbi stated in the Metro, it’s easy being sober, it’s everyone else who makes it difficult, which makes people nervous about socialising while sober. When it comes to dancing in public, I can’t imagine being sober, but in other situations I’m fine being sober. You just need practice at dealing with the nervous until you’re comfortable doing it. It might happen the first time, or it could take a few tries, but it’ll happen. It often helps to learn to become comfortable saying no.

As always, leave your feedback in the comments section below. Also, feel free to share your experiences with socialising sober and peer pressure to drink, and how alcohol and relationships have worked for you in the comments section below as well. Don’t forget to bookmark my site and if you want to stay up-to-date with my blog, then sign up for my newsletter below. Alternatively, get push notifications for new articles by clicking the red bell icon in the bottom right corner.

70 thoughts on “Alcohol And Relationships: Do You Need Alcohol To Socialise?”