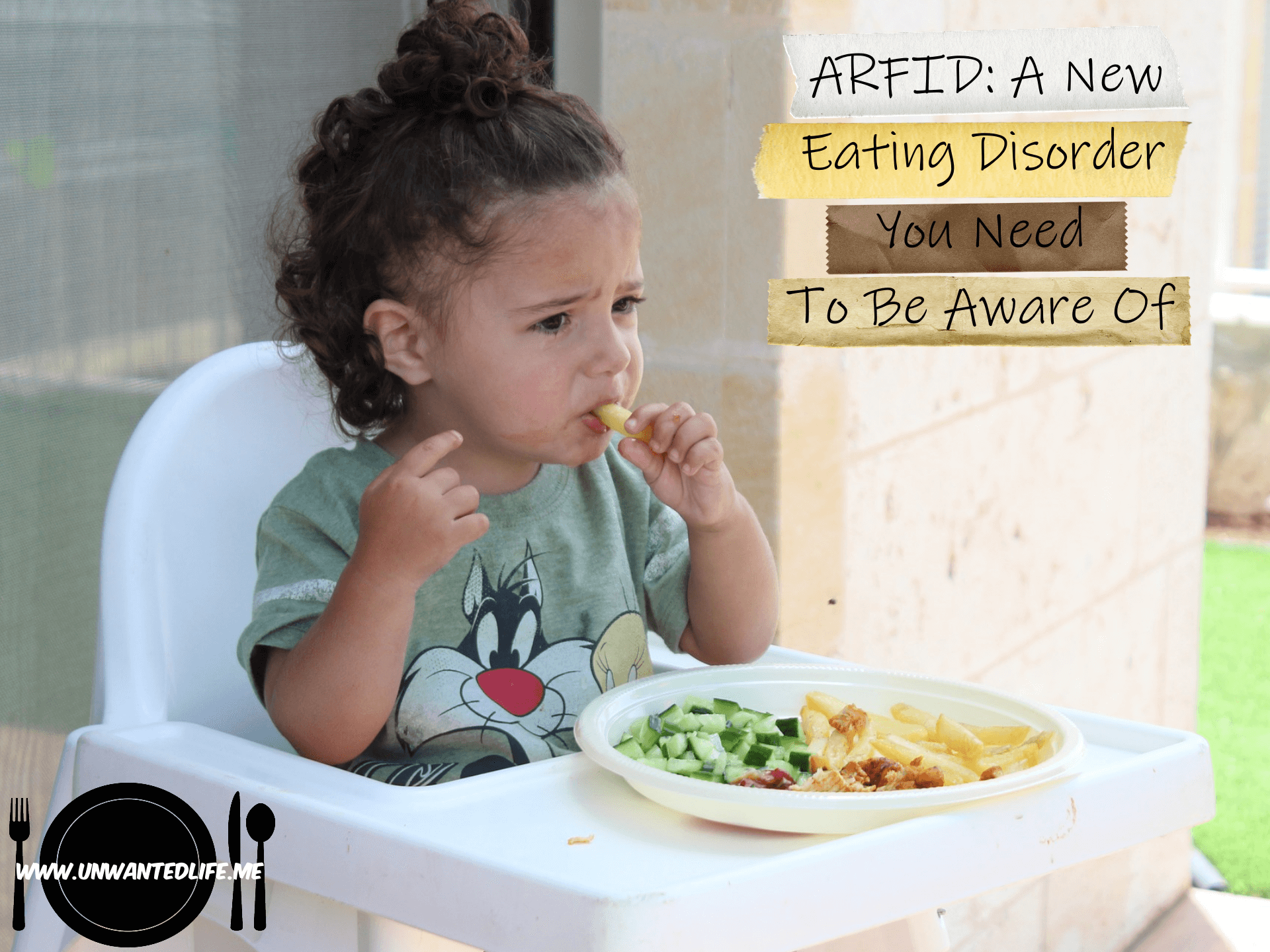 One of my favourite TV shows on UK TV is Food Unwrapped on Channel 4, and in 2020 they brought out a sister show, Food Unwrapped Investigates with Kate Quilton. While watching this sister series, I came across an episode about ARFID, a relativity new and not a well-known eating disorder.

Let’s start with what ARFID stands for, which is: Avoidant/Restrictive Food Intake Disorder. However, that on its own doesn’t give you the full story of what ARFID is. So next, let’s flesh it out with some details.

What makes ARFID an eating disorder?

Well, according to Coglan and Otasowie (2019), an ARFID sufferer will pathologically avoid or restrict their food consumption that ISN’T a result of cultural or religious practices, due to food scarcity, or as a result of a mental or other medical condition. An example of the latter might be someone who struggles to eat due to cancer or cancer treatment.

One of the notable characteristics of ARFID is how some sufferers will avoid certain foods or food groups, or they might restrict eating certain food and items from certain food groups (ARFID Awareness UK). So someone may avoid eating fruit or fish.

People with ARFID may show a lack of interest in food or eating, avoid food based on their sensory characteristics, or are worried about repeating food mishaps where they had an aversive consequence when eating a food item before (i.e. food poisoning or choking; Coglan and Otasowie, 2019).

Expanding on the sensory characteristics of food as a reason certain foods might be avoided, this could be taste, smell, and even textures of food. When I was force-fed food when I was a primary school kid, I developed a pathological hatred of baked beans. The smell, texture, sight, and even the tough of them on my hand when I was washing up would all trigger the same horrid response. 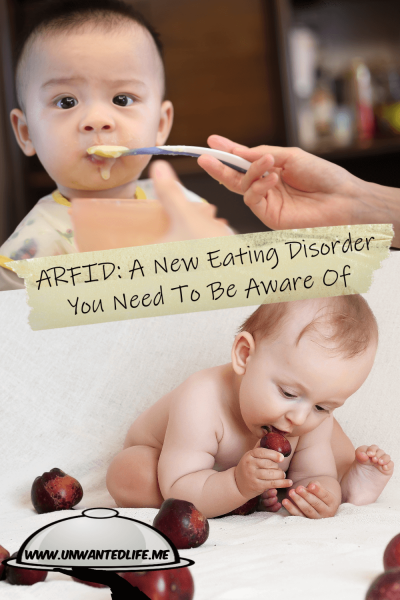 What makes ARFID different from other eating disorders?

​ARFID normally originates in early childhood and can result in a persistent failure to meet nutritional or energy needs Dovey (2018). However, ARFID isn’t driven by an individual’s belief about their size, weight, or shape of their body (ARFID Awareness UK). Thus, any weight, size, or shape changes aren’t the reason for this disorder and if these do change, it’s a consequence of having ARFID and not the reason for having it.

Because of this fact, the condition is underdiagnosed and under-recognised, because weight at presentation can range from underweight, to normal, to overweight (Coglan and Otasowie, 2019). It’s hard for people to recognise ARFID as an eating disorder when the food intake issues aren’t related to losing weight or their body image because it doesn’t feature any of the classic signs and behaviours associated with eating disorders like anorexia and bulimia (ARFID Awareness UK).

As a result of this underdiagnosis, the UK’s eating disorder services aren’t commissioned to support those with ARFID (Coglan and Otasowie, 2019).

You might have seen news stories or read in newspaper and magazines about people who only eat a certain food item for years. One of the ones I can remember was the story of a teen who only ate chicken nuggets for 15 years, resulting in them being hospitalised.

Another story was where a teen went blind from only eating crips and chips due to severe vitamin deficiencies and malnutrition damage. Unlike other eating disorders where you might starve yourself, eat and then make yourself sick, and/or binge eating, with ARFID you could eat at “normal” regular eating times (breakfast, lunch, and dinner) with the issues being the choice of what you eat because body image and weight simply aren’t a factor with ARFID sufferers. 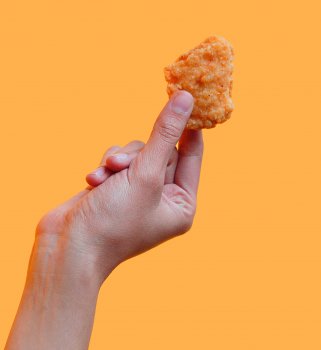 As a result of these kinds of misunderstandings, according to Dovey (2018), doctors can find themselves giving incorrect advice to parents. Because of this, eating disorders can become more entrenched and undermine early interventions, meaning conditions like ARFID might never become diagnosed.

So far, there are known exact causes of ARFID genetically speaking, but things that can cause it to develop are sensory sensitivity, lack of interest in food and eating, and a fear of negative consequences (ARFID Awareness UK). I know from my personal experience that I don’t eat seafood due to choking on bones and due to being so poor I had fish fingers every single day as a child for a decade (I really grew to hate the taste because of that).

Choking on food can be a very unpleasant experience, much like getting food poisoning, so it’s not hard to imagine how people, especially children, can develop an avoidance of such foods if they’ve had experiences like that. I know I did.

Another example of how ARFID can develop is as a result of an anxiety condition known as emetophobia, a fear of vomiting (Coglan and Otasowie, 2019). A person with emetophobia could be so scared of vomiting that they might restrict how much they eat or avoid certain food they think might make them more likely to vomit.

People can develop ARFID as a result of having food neophobia, which is an overwhelming fear of new or unfamiliar foods. Food neophobia and ARFID can also be mistaken for picky eating. However, ARFID is way more than that as it goes beyond, just being a fussy eater (I’m a picky eater) because it’ll affect their daily life.

One often overlooked cause is psychosocial influences from family and peers. If parents have food neophobia, then they’re likely to pass that on to their children, which makes sense. We often develop habits and behaviours based on what we observed are parents doing.

According to Beat, it’s very important to know that someone could have more than one reason behind their ARFID. As a result, ARFID will present differently for each person due to these individual differences. Thus, it’s not always useful to compare one ARFID sufferer to another. The main similarity between ARFID sufferers is just that they avoid or restrict food for reasons not related to weight loss, shape change, or other body image issues.

The link between developing ARFID in childhood is strong because children might not outgrow the normal developmental stage of picking eating, thus putting them at risk of developing the eating disorder. (The National Eating Disorders Association and ARFID Awareness UK).

In the context of the show, Food Unwrapped Investigates, which was looking mainly at children, picky eating doesn’t last and it’s only really an issue between the ages of 2-6, the food neophobia stage (Alimentarium). However, although this condition is most likely to start and end in childhood, ARFID doesn’t discriminate and can affect anyone of any age (ARFID Awareness UK), gender, race, etc.

Slightly different to causes, this section will look at what increases the risk of developing ARFID without some sort of eating-related bad experience. But as with other eating disorders, there are risk factors for ARFID which range from biological, psychological, to sociocultural.

According to ARFID Awareness UK, many children with ARFID are comorbid with an anxiety disorder, with the potential to also develop other mental health conditions.

People with autistic spectrum disorder (ASD) are more likely to develop ARFID, as are other people with intellectual disabilities, and people with ADHD (NEDA and ARFID Awareness UK).

There is an accepted association between ASD and food neophobia. Those with ASD commonly rely on routine, with deviations often resulting in a lot of difficulties, as I imagine a lot of parents of ASD children can testify to. Due to this lack of flexibility and their resistance to change, getting ASD people to eat different or new foods can be hard.

According to Newbridge (link no longer exists), research suggests that people with ASD can have rigid food preferences based not just on taste, but on textures and colours as well. This rigid preference adds to their food neophobia and ARFID condition.

For more tips on helping a child with ASD with ARFID and picky eating, click here to be taken to an article by Autism Parenting Magazine for more specialised advice to support a child on the autistic spectrum.

If you’re interested in watching episode four (‘How Dangerous Is Fussy Eating?’) of Food Unwrapped Investigates with Kate Quilton, which inspired me to write this article, then you can do so by clicking here.

As always, leave your feedback in the comments section below. Also, feel free to share your experiences with ARFID, picky eating, ASD and eating, and other eating disorders in the comments section below as well. If you want to stay up-to-date with my blog, then sign up for my newsletter below. Alternatively, get push notifications for new articles by clicking the red bell icon in the bottom right corner.

81 thoughts on “ARFID: A New Eating Disorder You Need To Be Aware Of”