I’ve been a member of an alternative subculture for over two and a half decades: I can’t imagine my life without it. I love everything from nu-metal to industrial and goth, so I don’t fit neatly into any of the specific alternative subcultures. However, I tend to refer to myself as a metalhead or a metaller as it’s easier. Because of my love for alternative music, I thought I’d write a post about how it fits in with mental health to inform people and to maybe help people along the way.

Disclosure: This post contains affiliate links. If you click through and make a purchase, I’ll earn a commission, at no additional cost to you. Read my full disclosure here.

In 2015 The Lancet published a study by Bowes et al. (2015) that kicked off a media storm about how being goth put you at more risk of depression and self-harm, even though the study admitted that it hadn’t factored in a whole range of individual, family, and social variables that could have influenced the results. They also quite clearly stated that their observational findings can’t claim that being Goth increased the risk of depression and/or self-harm. Their findings also showed that the majority of people who partially (9%) or fully identified as Goth (18%) didn’t report suffering from depression. But unfortunately, that didn’t stop the press.

Another study (Swami et al., 2013) showed that people that like metal, and related genres, suffered from lower self-esteem but also had a higher need for uniqueness, which doesn’t surprise me. We wear our uniqueness on our sleeve, so to speak.

That being said, being Goth might not be the cause of those who identify as being such as being at greater risk of depression and self-harm, but rather those that are already depressed and self-haring might be drawn to these kinds of alternative subcultures. Furthermore, belonging to this subculture (or any of the alternative subcultures) could bring them a sense of belonging instead of remaining isolated from society, which should help mitigate their depression and self-harming behaviours (NHS, 2015; they removed the source unfortunately).

Which is good because being alone and suffering from social isolation results in a higher likelihood of premature death (Holt-Lunstad, Smith, Baker, Harris, and Stephenson, 2015).

If you’re a parent of a goth teenager and you’re alarmed by today’s headlines, worry not. Your children might, like Neil Hannon’s fictional heroine, be having the happiest time of their lives. And if they’re not, goth might just be the thing that saves them

So in a way, members of these alternative subcultures can suffer from depression and self-harm, but it’s more likely that belonging to these kinds of groups is a positive rather than a negative, working as a way to protect them from those things, rather than causing it or making it worse.

The most common form of harassment for people from alternative cultures like being Goth, is verbal abuse, with these incidents tending to form a larger part of a long-term pattern of victimisation, which mimics hate crimes (Garland, 2010). This is especially true among school-age young adults. A study by Minton (2012) conducted on 820 students aged 16-17 in the Republic of Ireland, found that alternative subcultures like Goths, Emos, and Metalheads were targets of bullying, and thus members of these groups should be considered as being at risk of being bullied. Also, like traditional hate crimes, verbal and physical attacks also harm the victim’s core identity (Garland, 2010).

Sophie Lancaster Foundation was set up after Sophie and her partner Rob were attacked for looking different, for being a part of a musical subculture, an attack that unfortunately led to the death of Sophie on 24th August 2007.

The brutal and targeted nature of the murder of Sophie Lancaster disturbed the alternative subcultures of Goths, Metalheads, Emos, etc. alike. Being singled out for the way you look or are perceived to look, is alarming. The unprovoked attack that resulted in Sophie being murdered also raised concern and fear throughout the wider alternative music subculture community. That’s because the people engaging in this abuse are young groups of ‘ordinary’ males from the general population, who don’t know their targets, making it a ‘stranger danger’ problem (Garland, 2010). It’s not like you can avoid the general population, all you can do is learn to live with the anxiety that members of the general population may attack you for simply looking different to them.

People are finally starting to understand that abusing people from alternative subcultures is a hate crime. Although the writer of – Which Subculture Deserves to Be Protected As a Social Group? – for Vice seems to think otherwise. The writer seems to have conveniently ignored the fact that religious belief is a protected group, and following a religious belief is a choice in exactly the same way as being a member of an alternative subculture is. Like all concepts, shouldn’t they evolve to adapt to new realities, and shouldn’t hate crimes also be included in that? What do you think about these groups being protected by hate crime laws?

I always thought that being a goth was more of a life choice than an unavoidable path dictated by your birth, but whatever

A study by Recours, Aussaguel, and Trujillo (2009) found that Metalheads had levels of anxiety and depression that are at the same or lower than the general population. Now, being a Metalhead and a Goth isn’t exactly the same thing, but nonetheless, this would support the idea that belonging to any of the alternative subcultures would be beneficial rather than determinantal to our psychological wellbeing.

The alternative music scene was where I found my place in the world. Being a part of this subculture brought balance to my identity issues that made my emotions unstable and caused me countless emotional breakdowns. Before I found my way into this alternative subculture I was struggling to handle the trauma my childhood brought me. Alternative music and all its genres saved my life, and I seriously mean that.

Of course, for a few of us, we find our way into alternative subcultures, such as being Goth, Emo, Punk, or Metalhead and feel a connection and love for this kind of music, because we were already badly damaged. These groups give us something we could belong to which we couldn’t get anywhere else.

But it should also be noted that not everyone from these alternative subcultures finds their way into these groups because they’re already suffering from some sort of mental health issues, or are just looking for a place they belong. Nor will they develop such issues either. A lot of the members of these alternative subcultures will be there simply for the love of the music and style.

The way the media reported the study published by The Lancet isn’t the only way these alternative subcultures have been misrepresented. Watch almost any TV show or film and the characters from alternative subcultures act in ways that paint us in a pretty bad light. But the reality is, having these identities helps us survive the stress, builds strong and sustained identities and communities, and helps us avoid and manage potential mental health issues (Rowe and Guerin, 2018). We’re also people just like everyone else.

This is also supported by Howe et al. (2015) who recruited middle-aged former 1980s heavy metal groupies, musicians, and fans on Facebook, finding that being a Metalhead had protective factor against negative outcomes. Although due to this method of gathering participants, those we didn’t fare well might not be on Facebook or willing to volunteer. But you can say that about any research, as you can’t force people to take part against their will.

A study by Sharman and Dingle (2015) found that listening to heavy metal music is actually therapeutic for us. Participants who were angry who listened to angry music didn’t get more aggressive but instead benefited from an increase in positive emotions. Which I know from personal experience. Thus, enjoying alternative music and belonging to these alternative subcultures can benefit us in a number of different ways.

I’ve used music in a number of different ways to help me deal with my emotions and lack of motivation, and a good dance around the room when I’m angry to some heavy metal always makes me feel better, it also helps me feel motivated as well. Although other music genres can help me feel motivated too, anything I can sing along to really.

As part of writing this post about the alternative subcultures that I love and belong to, I thought I’d create a peer support group. This group is aimed at anyone who feels unwanted or feels like a misfit, whether you’re Goth, Emo, Punk, Metalhead, LGBTQI+, etc. this group is for you. You are all wanted.

You’re all wanted at the Mental Health Home For Misfits

As always, leave your feedback in the comments section below. Also, feel free to share your experiences with alternative music and its subcultures in the comments section below as well. If you want to stay up-to-date with my blog, then sign up for my newsletter below. Alternatively, get push notifications of new articles by clicking the red bell icon in the bottom right corner. 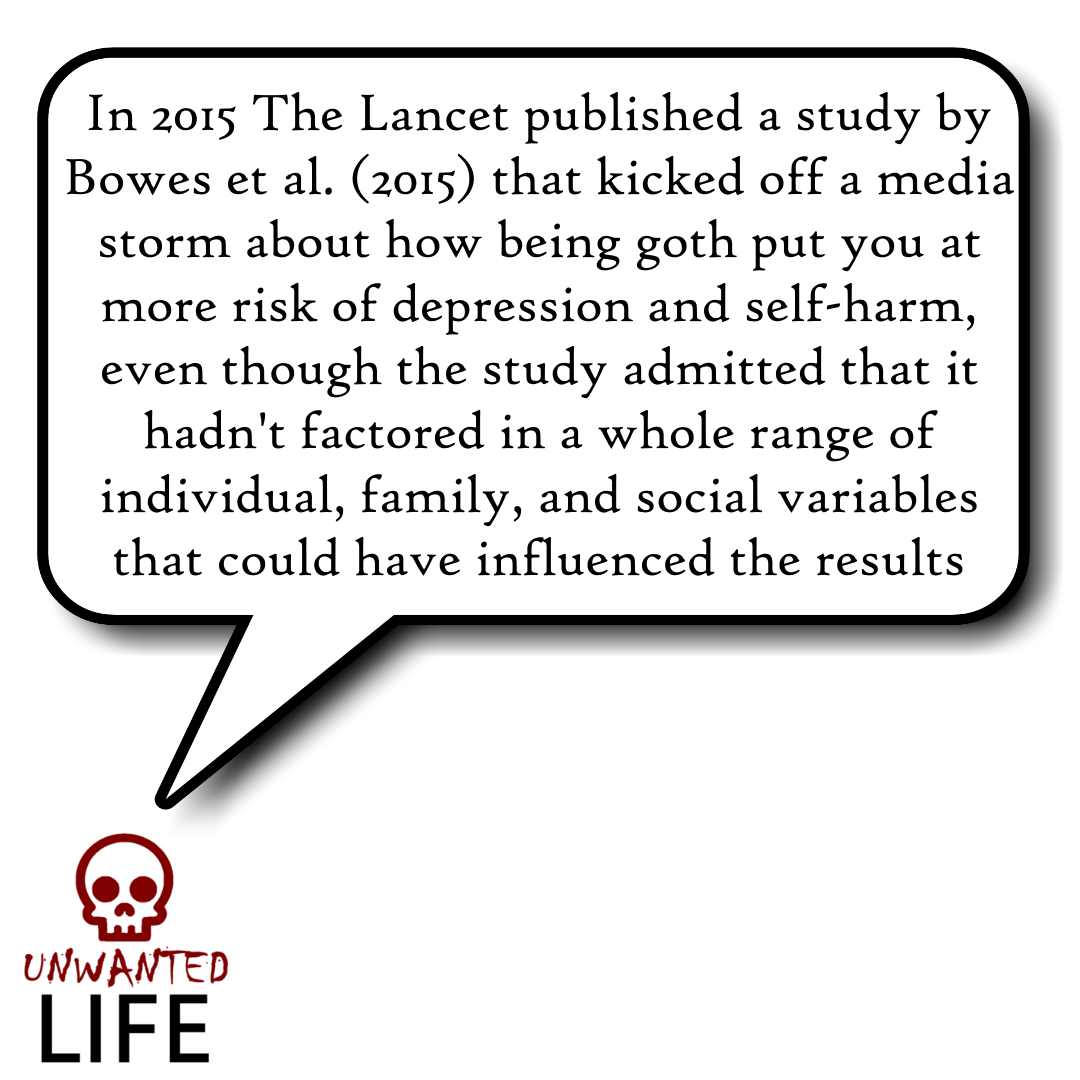 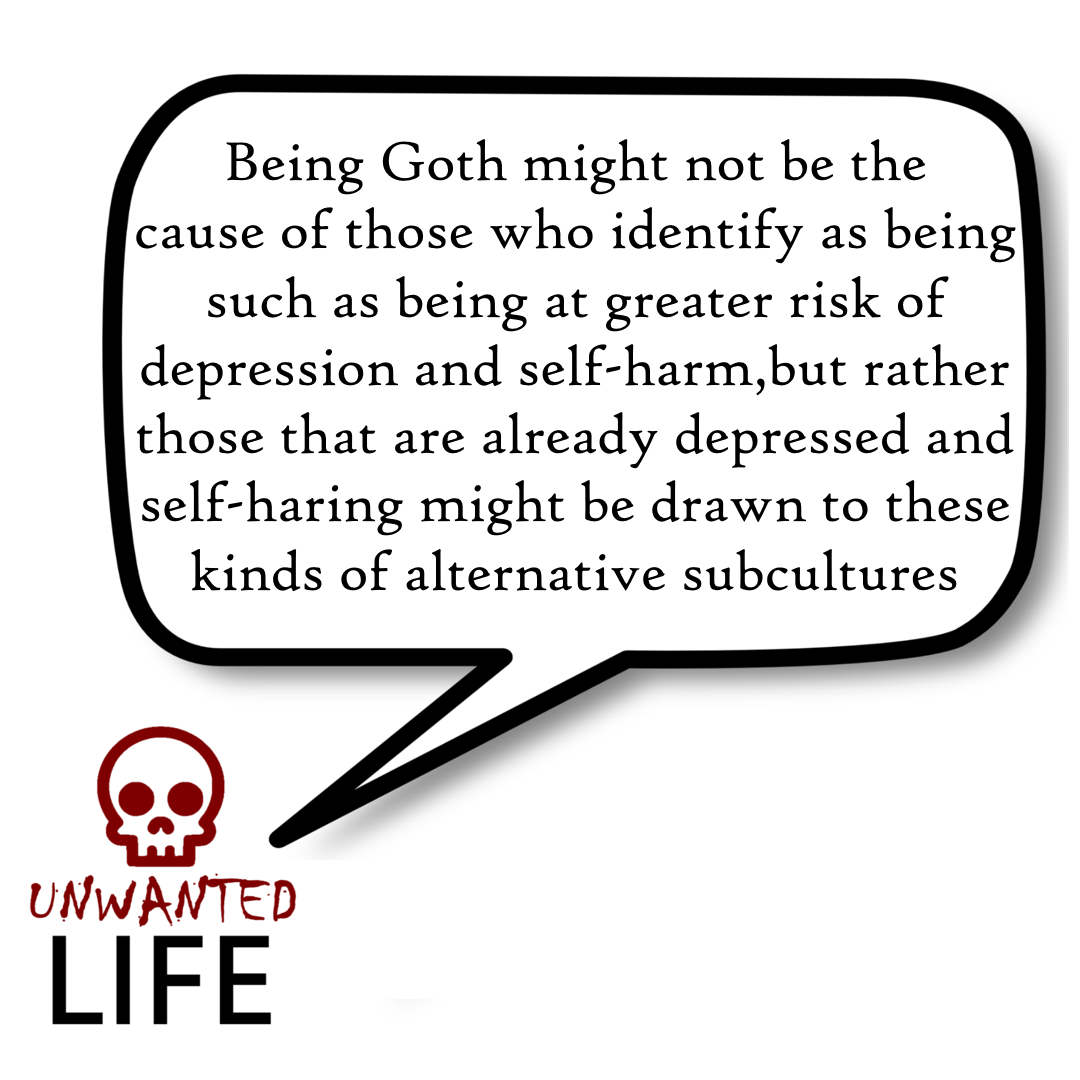 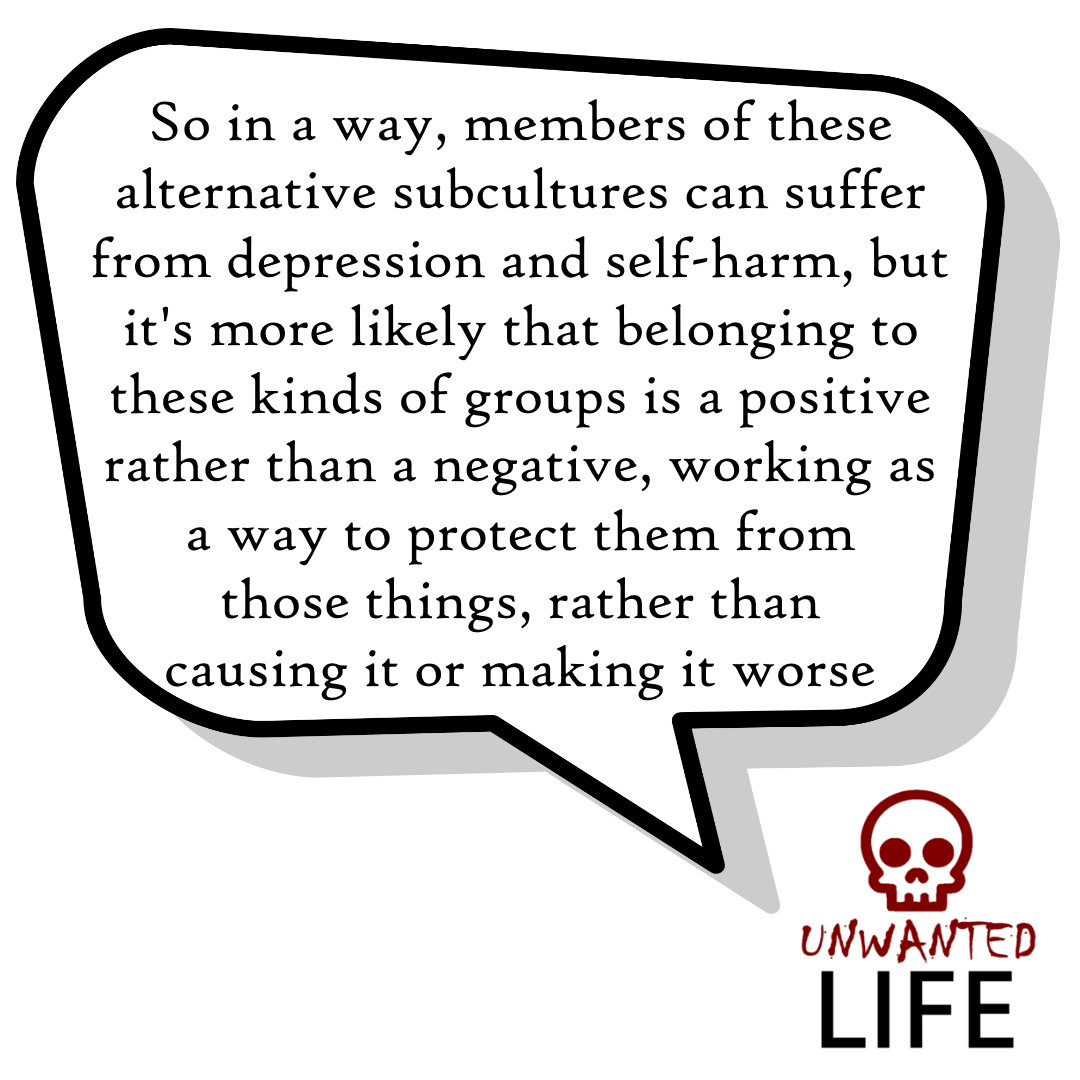 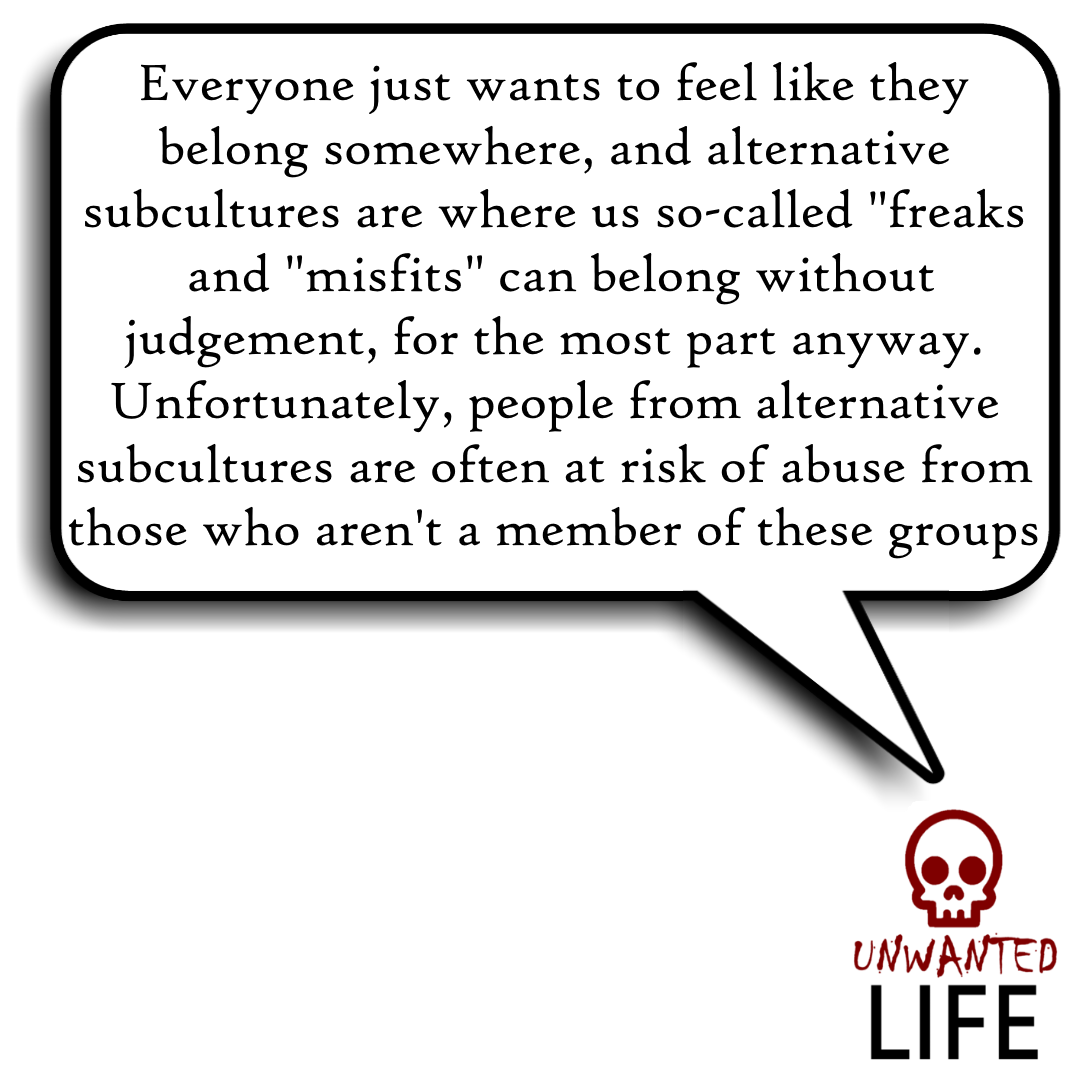 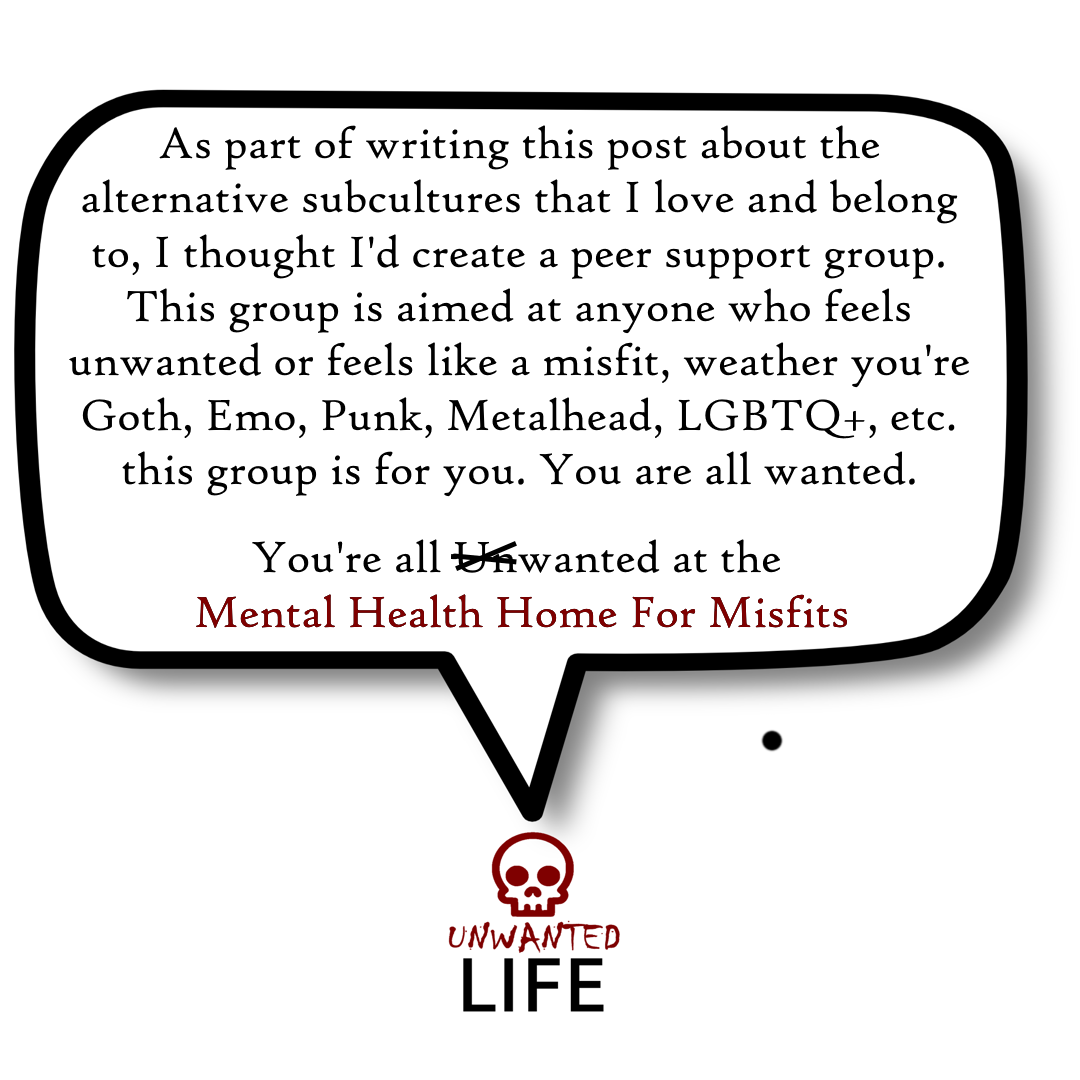